Andrew Symonds’ devastated wife and children clutched Akubras as they gathered to bid one last emotional farewell to the cricket great.

Shattered family, friends and former Australian teammates fought back tears as they gathered at Riverway Stadium on the outskirts of Townsville, north Queensland for a private funeral on Friday.

The service came almost a fortnight after the much-loved former Australian all-rounder, 46, veered off the road and fatally crashed his car.

Among the first to arrive just after 10am an hour prior to the service were Symonds’ wife Laura and their children Chloe and Billy, each of them carrying hats in a nod to the Aussie larrikin. 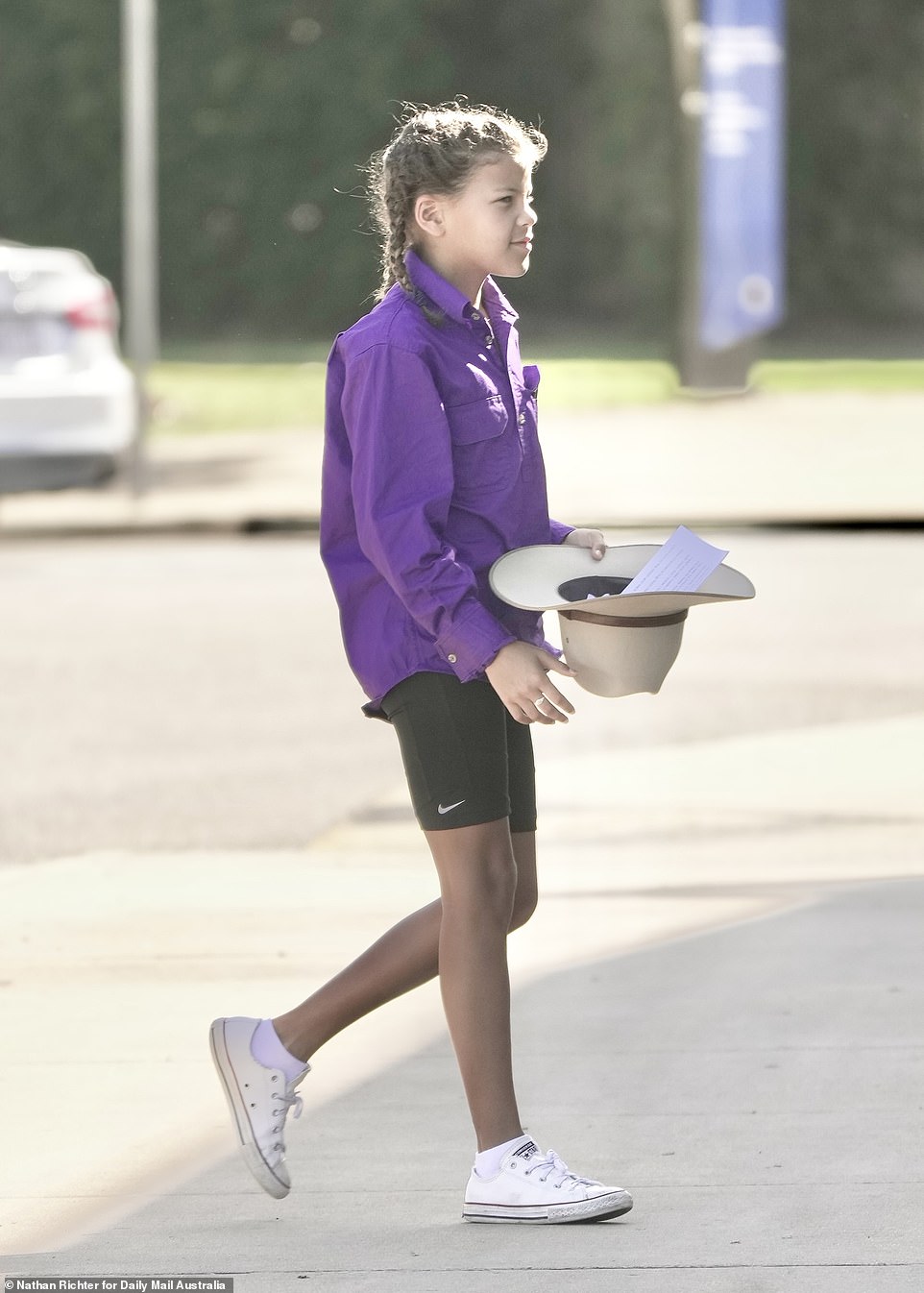 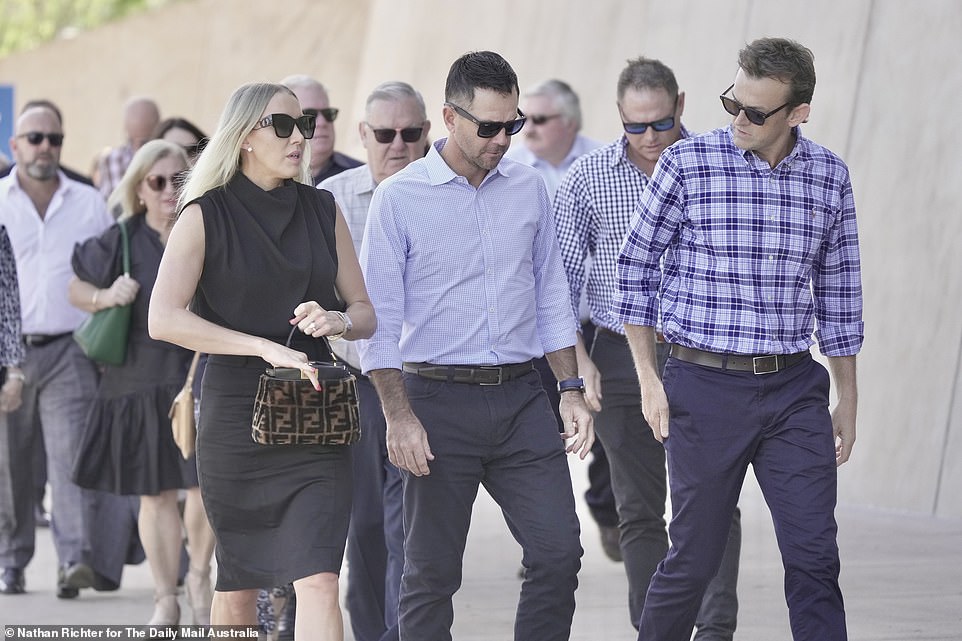 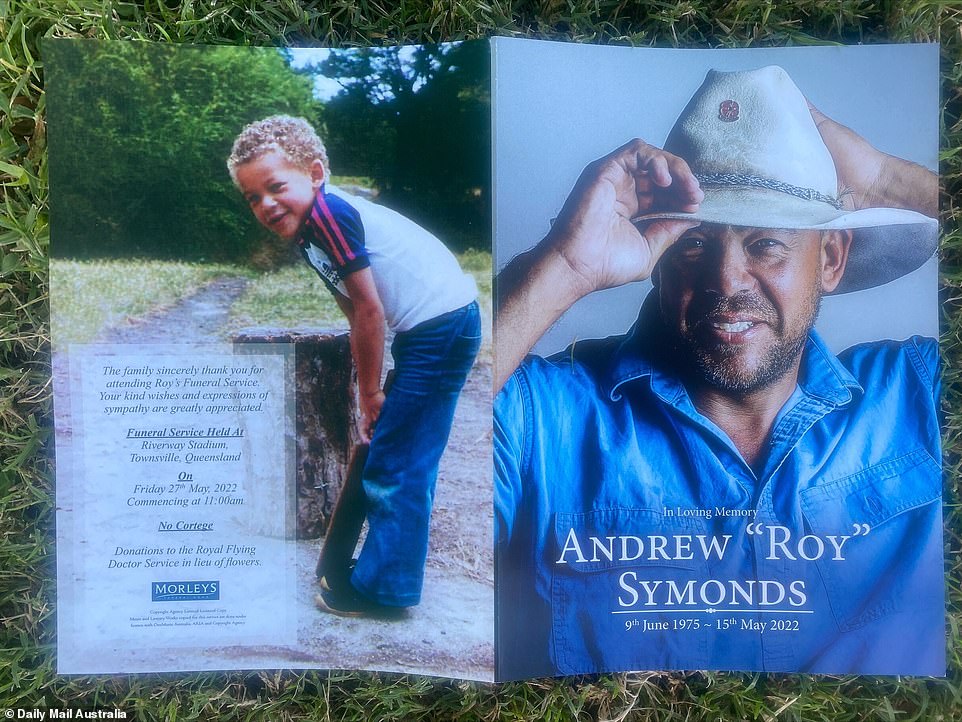 They were followed a short time later by Symonds’ best friend and former Australian and Queensland teammate Jimmy Maher.

A note was sent to guests saying ‘no tie necessary’ to reflect Symonds’ casual personal style. Throughout his career, he often showed up to semi-formal events wearing shorts and t-shirts.

Former teammates took the brief seriously with chinos and button-up shirts, while others wore three-piece suits.

Many greeted each other with hugs, holding back tears, as they came together to pay tribute to Symonds and celebrate his life.

The order of service featured a poem titled ‘You ripper Roy’ celebrating Symonds’ life penned by poet Rupert McCall, which he also read out at the service in honour of his good mate.

‘Fate marks a moment in everyone’s life, the tide turns at dusk and the big fish are rife,’ it reads

Instinct befriends you and confidence grows, talent takes over and everything flows.

Where to from here? Well, with him, who’s to say? The ocean is deep and the fella can play.

For now, let’s acknowledge the dream of a boy, and the day he fulfilled it…’You ripper Roy’. 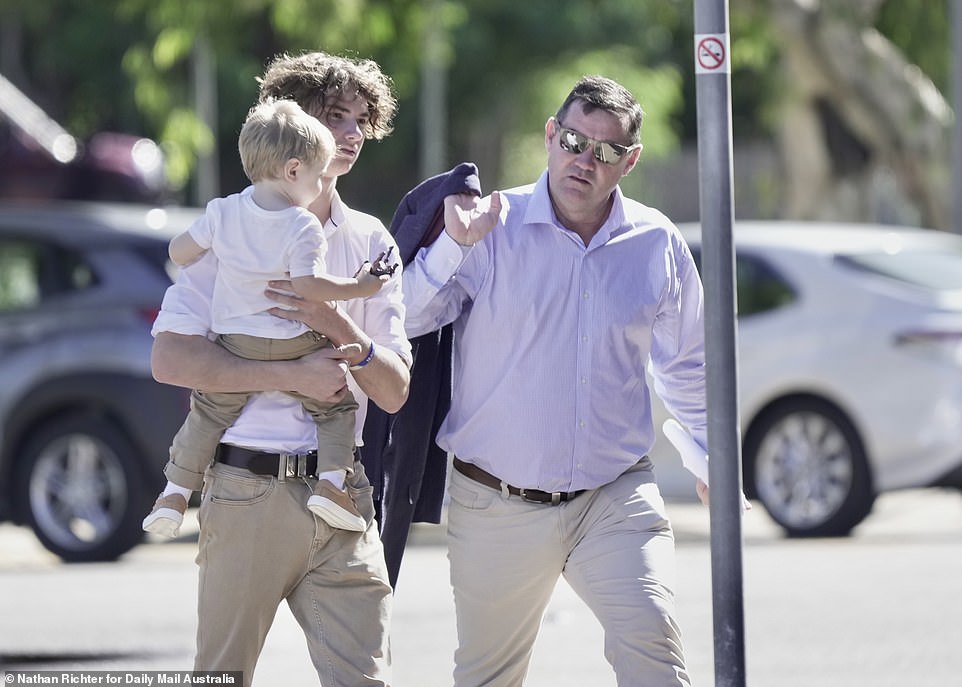 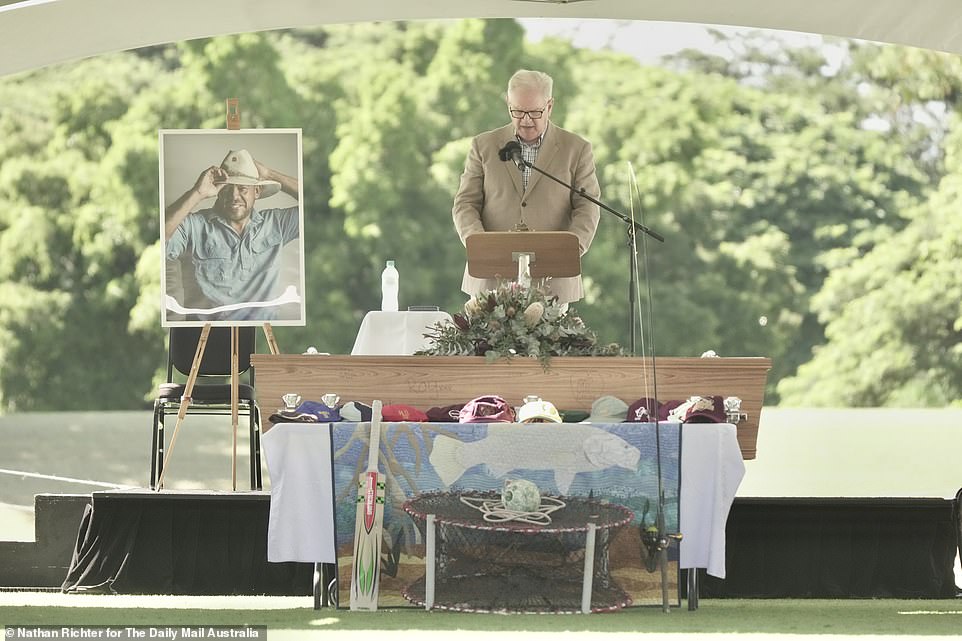 Andrew Symonds’ coffin at the service was surrounded by a host of cricket caps, along with his cricket bat

Guests at the service were sombre – completely silent as they sat in the middle of the stadium, as piano played softly in the background.

Symonds’ smiling face could be seen on three screens, and on a photo above the coffin – adorned with flowers, sitting behind a table with cricket caps and trinkets.

Cricket stumps were positioned around the marquees.

Symonds’ children Chloe and Billy were next to speak, followed by his mother Barbara and sister Louise.

Little Chloe got up from her seat in the front row and gave him a big hug, before she hopped on to her mum’s lap.

Maher tried to maintain composure, taking swigs from a water bottle, before he got up to deliver the eulogy.

Few people knew Symonds better than long-time good mate and former teammate. The pair first began playing cricket together in the under-10s in the nearby town of Charters Towers.

One of Maher’s fondest memories of the pair’s 30-year friendship was being part of Australia’s victorious 2003 World Cup squad.

A public service will be held and live-streamed later on Friday afternoon. 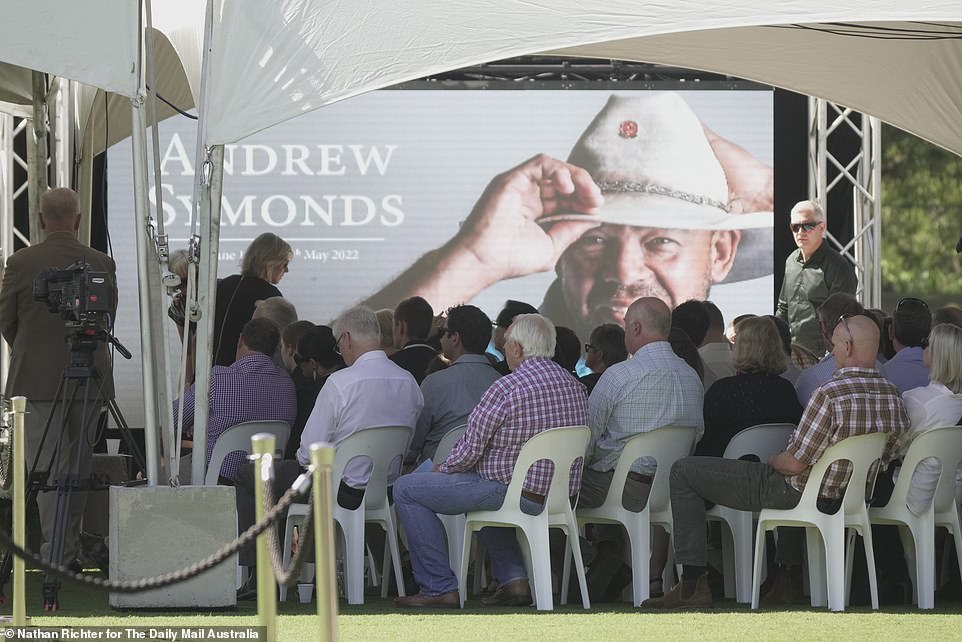 Around 100 family, friends and former teammates are

EXCLUSIVE: Inside Andrew Symonds’ last hours alive doing what he loved – as his family are baffled by one crucial detail and it’s revealed the cricket legend had secretly separated from his wife

Andrew Symonds spent his final 24 hours doing what he loved, fishing and catching up with buddies at his favourite sports club, before he died in a car accident three hours later on a remote road.

The cricket legend was still in his fishing gear when he arrived at the Brothers Leagues Club in Kirwan, about 16km west of Townsville in Far North Queensland, on Saturday afternoon.

‘I’d say he spent the morning fishing before he got to the pub,’ Justin Wilkins, the club CEO, told Daily Mail Australia.

‘He stayed there until about 8pm, and then he left.’

Symonds died almost three hours later when his ute veered off Hervey Range Road, about 14km west of the pub, and rolled up an embankment on his drive home from a mystery location.

Family are desperately trying to piece together where the cricketer went after leaving the pub at 8pm, collecting his dogs and suffering a fatal crash on the remote road, with his sister saying they ‘just don’t know’.

The cause of the smash is yet to be determined but Queensland Police said alcohol was not a factor, and Mr Wilkins said he didn’t think Symonds had much to drink. 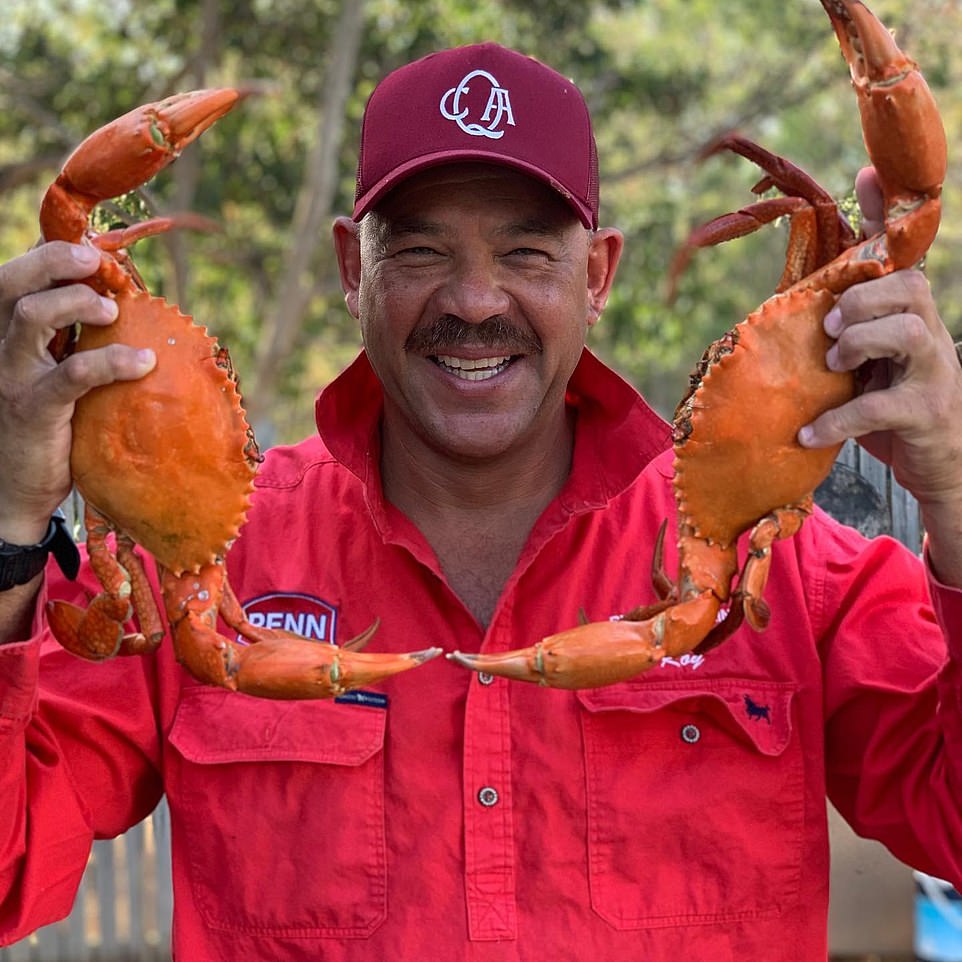 Andrew Symonds (pictured) went fishing and went to the pub before he died on Saturday night, Daily Mail Australia can reveal 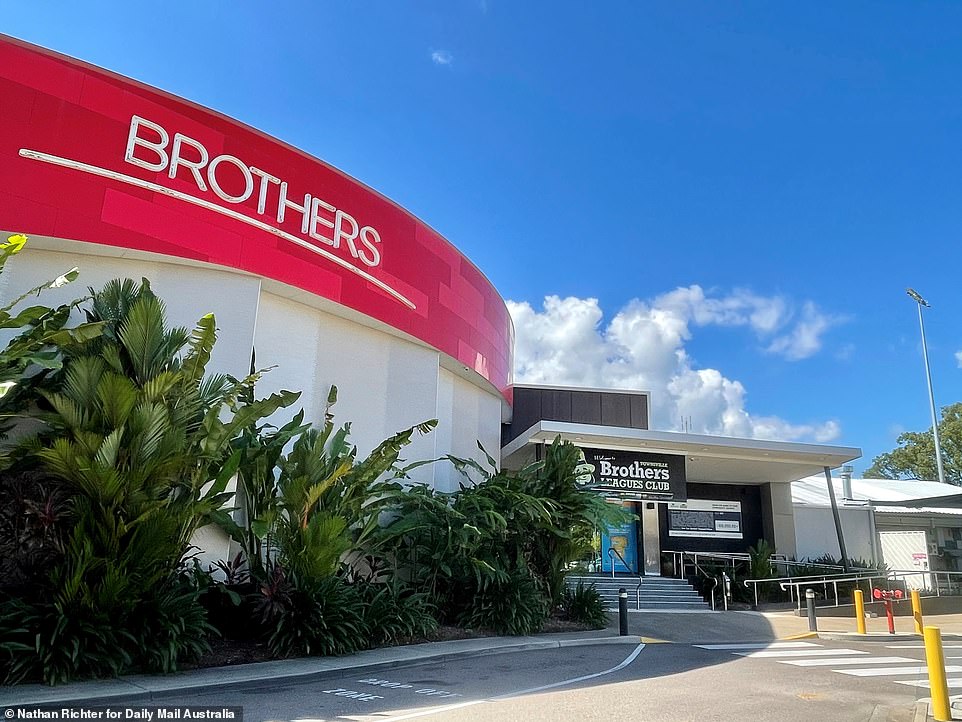 Andrew Symonds went to Brothers Leagues Club (pictured) on Friday, and then again on Saturday 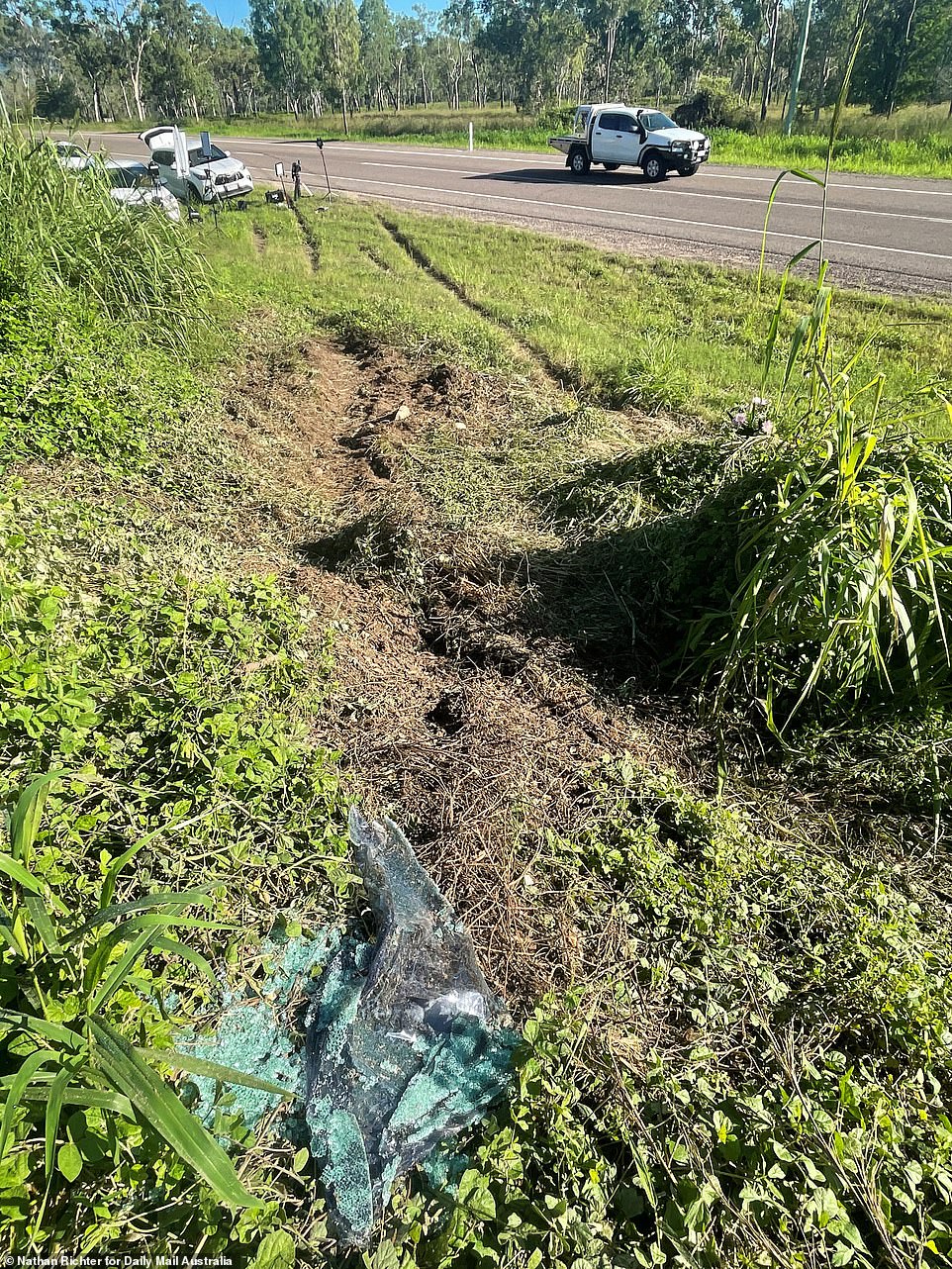 ‘He was a big guy and he could put it away, but I don’t think he drank a lot before he left on Saturday,’ Mr Wilkins said.

He also didn’t know where Symonds went between leaving the pub and hitting the embankment, but it is understood he went home to collect his two beloved blue heeler dogs before he left and drove west.

The cricketer’s home is a two-minute drive from the club in Kirwan. The site of the crash is about 15 minutes west of Kirwan, near Alice River Bridge.

Symonds’ beloved pets were in the back of the red 4X4, which had personalised ‘ROY’ number plates at the time of the accident.

It was the same vehicle the keen angler used to tow his boats on his many fishing trips.

The dogs survived the crash, with one refusing to leave Symonds’ body on the side of the road.