Andrew Yang’s crowd chanted ‘2024!’ as the presidential hopeful officially dropped out of the race Tuesday night

Yang announced he was suspending his campaign as the results of the New Hampshire primary trickled in, putting him in eighth place in the Granite State.

‘My goal when I first started running was to solve the problems that got Donald Trump elected,’ Yang said, adding that he would support whomever the Democrats choose to take on the president.

He added that the eventual nominee would take this advice: ‘Donald Trump is not the cause of all of our problems. He is a sympton of a disease that has been building up in our communities for years,’ Yang said.

Minutes after Yang concluded his speech Sen. Michael Bennet of Colorado also announced he was out. He became the 20th Democrat to drop out.

The entrepreneur –  who had never held political office –  made the centerpiece of his campaign the quest to get Americans a ‘universal basic income,’ which Yang dubbed his ‘freedom dividend.’ 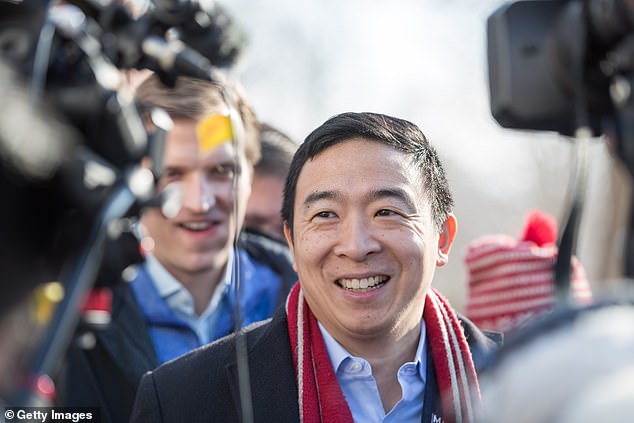 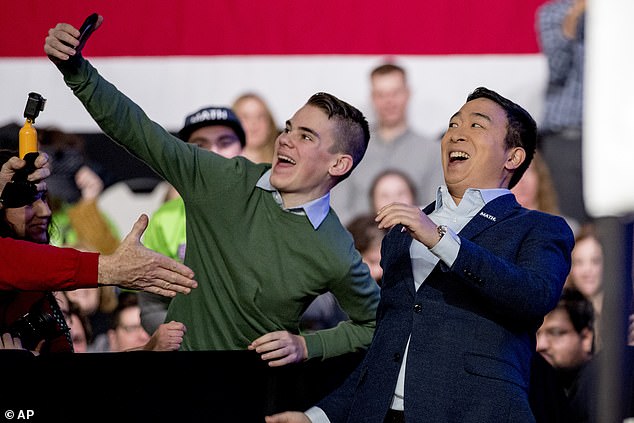 The idea was to give Americans an income of $1,000 a month to which they could do with it whatever they wanted.

And for two debates – in December and February – he was the only person of color onstage.

While Yang never pulled himself out of the single digits in national polls, he attracted hoards of internet-savvy young supporters who called themselves the #YangGang.

He also got the attention from a number of celebrities.

He got the endorsement of edgy comedian Dave Chappelle, who brought Yang onstage at an event at the University of Iowa last month and hosted two comedy shows in South Carolina for the candidate earlier this month.

In Los Angeles he raised funds by selling campaign merchandise – like hoodies and T-shirts – that was a design collaboration with Childish Gambino.

Taking inspriration from the company Supreme, Yang’s campaign set a pop-up shop in Los Angeles letting several supporters in at a time, which created lines stretching blocks away and viral attention for Yang’s candidacy.

Yang leaving the race means that every candidate who remains is white.

In the days leading up to the New Hampshire primary Yang hinted that he might have to drop out soon – as he needed funds and more substantial support to carry on.

Tuesday night, when thanking his campaign staff, he said, ‘Very few people joined this campaign because they thought it was going to be a good career move.’