Android’s co-founder, Andy Rubin, has taken a leave of absence ‘for personal reasons’ shortly after it was claimed he had an ‘inappropriate relationship’ with a woman while working at Google.

Employees at Essential Products, a technology company founded by Rubin, were told of the leave of absence on Monday.

Rubin left Google in 2014 to create, Playground Global, an incubator for hardware startups.

But following his exit, an investigation was launched into an ‘inappropriate relationship’ that Rubin allegedly had with a woman.

Android’s co-founder, Andy Rubin, has taken a leave of absence ‘for personal reasons’ shortly after it was claimed he had an ‘inappropriate relationship’ with a woman while working at Google. Rubin is pictured in June at the WIRED Business Conference

According to The Information, the woman, who is said to have worked on the Android team ran by Rubin, may have been the reason for him leaving the company.

DailyMail.com was unable to independently confirm The Information’s reporting. But Rubin previously said he departed because he wanted to invest more in robotics projects. 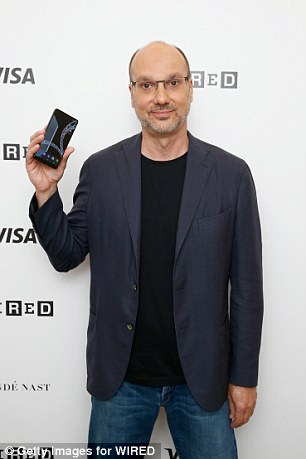 On Wedneday, the DailyMail.com reached out to Essential Products, which was founded by Rubin in 2015. Rubin is currently the CEO.

A company spokesperson told the DailyMail.com: ‘At our last regularly scheduled board meeting earlier in November, Andy asked for a leave of absence to deal with personal matters.

‘The Board agreed and our President, Niccolo de Masi, will continue to run day to day operations at Essential.’

Essential would not specify the length of Rubin’s leave nor how a determination would be made about a return to his chief executive officer post.

Google reportedly launched the investigation into the alleged relationship after a woman complained to Human Resources.

The nature of the woman’s relationship with Rubin is still unclear, but Google has a policy that does not allow relationships between supervisors and subordinates on the same team.

When tech news site, The Information, reportedly reached out to Rubin’s spokesman, Mike Sitrick, they were told by Sitrick that ‘any relationship that Mr. Rubin had while at Google was consensual’. 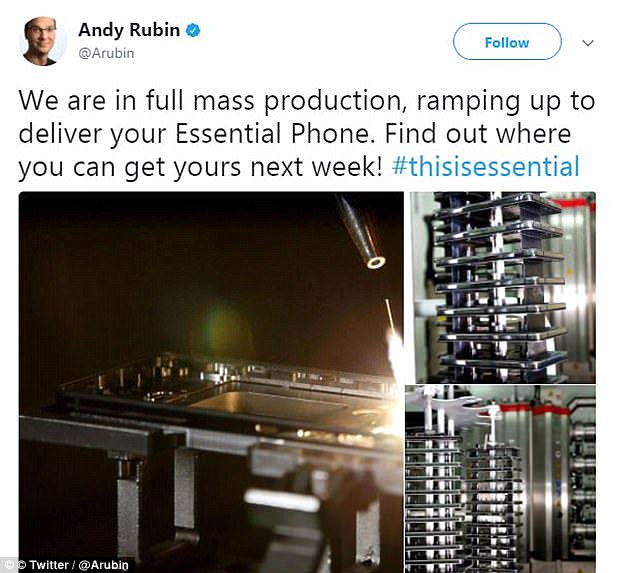 Rubin, who is married to Rie Rubin, announced in August that the Essential phone (pictured), designed to take on the iPhone and Samsung Galaxy, had gone into full production 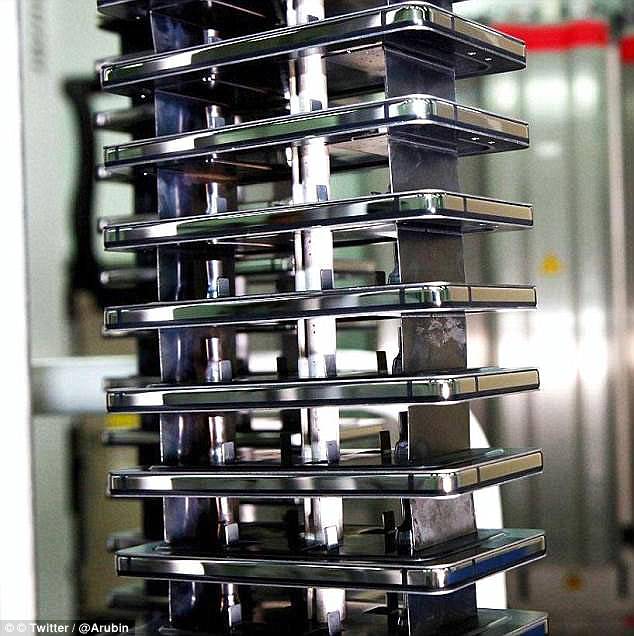 At the time, Essential said it had raised more than $300 million in new funding and signed up retailers to sell its first device (pictured)

Rubin’s decision to take a leave of absence comes amid heightened scrutiny of impropriety and sexual misconduct in technology, media, entertainment, politics and other industries.

This year, several venture capitalists and entrepreneurs have taken leaves or stepped down as a result of accusations about inappropriate behavior.

Rubin joined Google in 2005 when the search giant acquired Android. He oversaw development of what is now the world’s most used mobile operating system until an executive restructuring in 2013.

Google put Rubin in charge of a nascent robotics effort, but he left the next year to launch Playground Global, an incubator for hardware businesses.

The venture led to Essential which has raised $330 million in funding from Access Technology Ventures, Tencent Holdings Ltd and Amazon.com Inc.

Rubin, who is married to Rie Rubin, announced in August that the Essential phone, designed to take on the iPhone and Samsung Galaxy, had gone into full production.

Prior to Android, Rubin was working at Danger, the company that created the Sidekick mobile phone.

He has also worked for Apple and General Magic, before it ceased operations in 2002.