If this was to be a version of the future after Andy Murray then British tennis would undoubtedly take it.

For the first time in 25 years three GB men will play in the quarter finals of a main ATP Tour event on Friday, albeit one on the peculiar surface of grass.

And not one of them will have the surname Murray, after the double Wimbledon champion was beaten 6-3, 6-3 by world No 9 Matteo Berrettini in the third round of the cinch Championships. 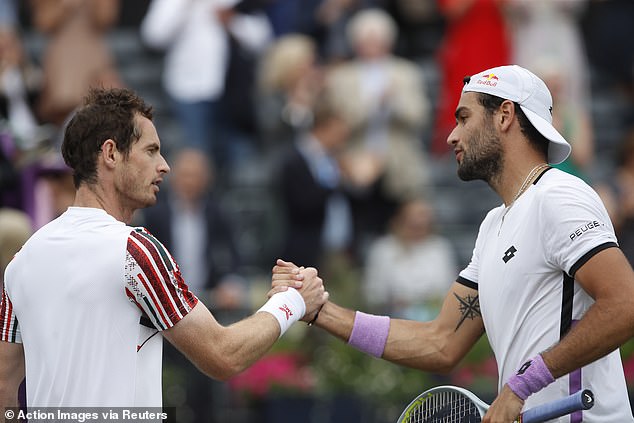 It is not broadly representative of overall British fortunes, which for years have been camouflaged by Murray’s success, prior to his hip issues.

On the evidence of Thursday it nonetheless looks possible that the 34 year-old Scot could yet make some indentation at Wimbledon, and he is not quite finished yet.

His problems against the No 1 player from the coming power in men’s tennis, Italy, was not so much his movement but his lack of match sharpness. 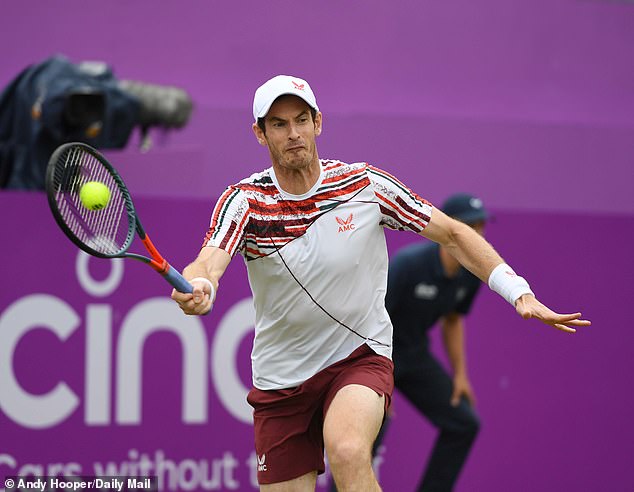 It left him in the unusual position of being asked to assess the trio who have out-survived him. Prior to his match Evans had put in another impressive display as he overcame the skilful Frenchman Adrian Mannarino 6-4, 7-6.

‘Dan’s obviously been doing exceptionally well for quite a long period now. Did very well last year as well and the year before and has a game that suits the grass,’ said Murray.

‘Cam is getting better all the time. He works exceptionally hard and is a very, very fit guy. He has a really good attitude.

‘Jack has got a big game, a big lefty serve. He moves well for his height. He’s going to do really well.’

Murray was looking forward to returning home after being confined to the official hotel, now that he is out of the tournament. He left open the possibility of playing at Eastbourne next week, but said he would probably opt not to.

‘I actually felt my movement was quite good for both of the matches here, but my tennis wasn’t very good,’ said Murray. ‘I played two sets in preparation for this event, not much when you haven’t played matches since March. You’re having to make split-second decisions, the guy today is serving 140 miles an hour, it’s difficult to prepare for that. 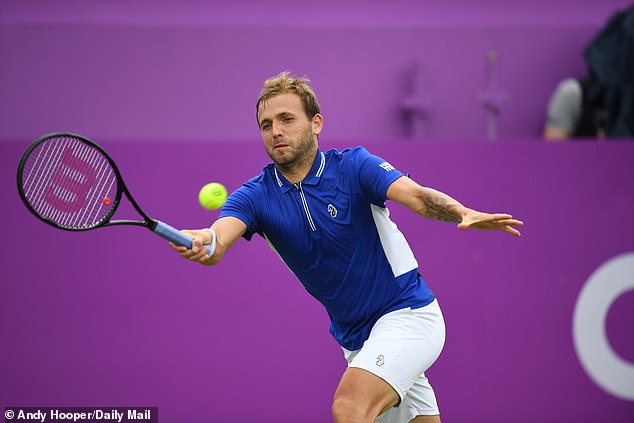 ‘I need to be on the court with the top players, and that’s what I’ll try and do the next week, I need to manage the groin a little bit, as well. It’s a bit tricky.

‘I’m not sitting in the locker room after a match and going “I’m just happy being out there.” I’m not happy losing 3 and 3 today.’

In a perfect world Evans would have been playing Murray on Friday afternoon – weather permitting – in an appetiser for England v Scotland in the Euros. Instead he will have to try and defuse the huge power of the Italian, who has about the biggest serve-forehand combination on the tour right now.

Norrie versus Draper, two lefthanders up against each other, will be intriguing. It is not an easy match-up for Norrie, having to face the raw artillery of the 19 year-old from Murray’s adopted neck of the woods in Surrey, who has little to lose.

There have been some encouraging results around this week among the younger Brits. Kent’s Anton Matusevich, 20, is into the last eight of the Challenger in Nottingham, while in the women’s event 18 year-old Emma Radacanu beat the experienced Timea Babos of Hungary 6-3, 6-3.