Angela Merkel today underlined warnings that the Brexit deal will not be reopened – as a key aide to Jean-Claude Juncker denied the EU is ready to give legal guarantees on the Irish backstop.

The German Chancellor said she was determined to do ‘everything’ to avoid the UK crashing out, saying it could be done if ‘everyone shows goodwill’.

However, she said changes to the Withdrawal Agreement were not ‘on the agenda’ – potentially putting a huge roadblock in the way of Mrs May’s efforts to get a breakthrough.

Meanwhile, the EU commission’s top official Martin Selmayr rejected the idea that the bloc could give ‘legally-binding assurances’ that the backstop will not last indefinitely. He also delivered a thinly-veiled threat by boasting that Brussels had ‘done well’ to start its no deal preparations in December 2017.

The latest signs that EU leaders are playing hardball came as it emerged the PM will deliver a speech in Northern Ireland tomorrow as she scrambles to find a way through the standoff.

Mrs May will underline her ‘absolute commitment’ to avoiding a hard Irish border during the visit, according to aides.

Speaking alongside Japanese PM Shinzo Abe today, Angela Merkel (left) said ‘we want to do everything to avoid a no deal because that would increase the uncertainty’. 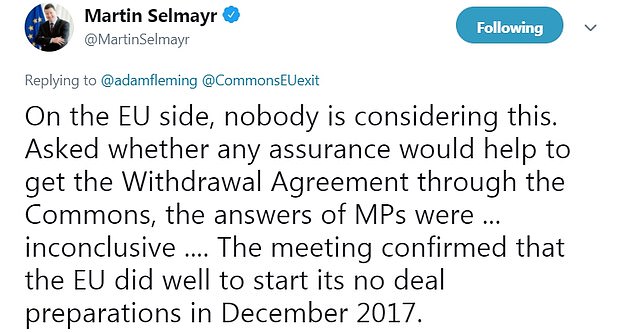 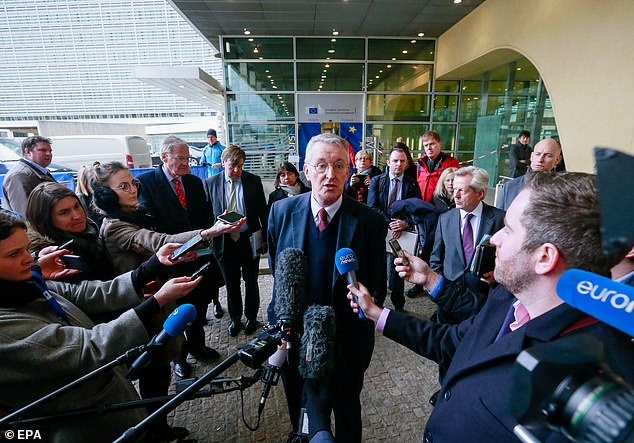 The Labour chairman of the Commons Brexit committee, Hilary Benn, dismissed the ‘Plan C’ ideas being cooked up between Tory Remainers and Brexiteers during a visit to Brussels today

The premier has also invited rebels from both Conservative wings to join discussions on how to handle the UK’s departure from the EU – which is now less than eight weeks away.

But Cabinet ministers have voiced fears that there is ‘nothing she can get’ that will satisfy the hardline Brexiteers. One told MailOnline they seemed intent on forcing no deal, warning: ‘She could get the backstop removed and even that wouldn’t be enough. They would just find some other excuse.’

Speaking alongside Japanese PM Shinzo Abe today, Mrs Merkel said ‘we want to do everything to avoid a no deal because that would increase the uncertainty’.

But she reiterated that the Withdrawal Agreement had been painstakingly negotiated and could not be reopened.

‘This is not on the agenda,’ she said.

Instead Mrs Merkel repeated the EU line that concerns over the Irish backstop – the insurance policy designed to avoid a hard line between Northern Ireland and the Republic – could be dealt with in the political declaration on future trade terms.

‘We need to show creativity, we need to listen to each other,’ Mrs Merkel said.

‘We can still use the time to come to an agreement over the things that are standing in our way, if everyone shows goodwill.’

What is Plan C?

Under Plan C, the UK would ask for the transition period to run for an extra year to the end of 2021 and EU citizens living in Britain would have their rights protected.

There is then a two-pronged approach to the negotiations.

First, the UK would demand the EU negotiates a new Irish border backstop that is acceptable to Brexiteers.

They suggest a technology-based system for goods crossing the Irish border that has already been rejected by the EU.

If this proves impossible, the group would then suggest a no deal exit based on keeping the transition period from the existing plan in return for paying some of the divorce bill.

Both sides would then use the three year transition period to prepare for an exit on basic World Trade Organisation rules, while negotiating a final trade deal.

If it went ahead, Brexiteers would get to remove the backstop they say is unacceptable while Remainers still get the transition period they say is essential.

Mr Abe said it was ‘necessary to minimise the risk of Brexit on the European and World economy’. ‘We must avoid a no-deal Brexit,’ he added.

Mr Selmayr met MPs on the Commons Brexit Committee in Brussels this morning.

Afterwards he gave short shrift to claims on Twitter that legally-binding assurances could be given on the backstop in a bid to get the deal through Parliament.

‘On the EU side. nobody is considering this. Asked whether any assurance would help to get the Withdrawal Agreement through the Commons, the answers of MPs were … inconclusive …. The meeting confirmed that the EU did well to start its no deal preparations in December 2017,’ he tweeted.

Tory Brexiteers have repeated that tweaks to the political declaration will not be enough to satisfy them.

Jacob Rees-Mogg told LBC Radio today that he could ‘reluctantly swallow’ the PM’s Brexit deal if the backstop was replaced with a technological fix – something the EU regards as ‘magical thinking’.

Speaking after his meeting with Mr Selmayr, the Labour chairman of the Commons Brexit committee, Hilary Benn, dismissed the ‘Plan C’ ideas being cooked up between Tory Remainers and Brexiteers.

He told reporters: ‘A lot of it to me, I have to say, personally, looks very familiar if you go back to last summer when people looked at technology and trusted traders and all of that, and a great deal of effort was put into examining those as a possible way forward.

‘The conclusion that was reached I think on behalf of the British Government and the European Union was that well, it’s not going to work.

‘And I personally, but others will have a different view, personally I don’t see how it can work particularly in the very short amount of time that there is left.’ 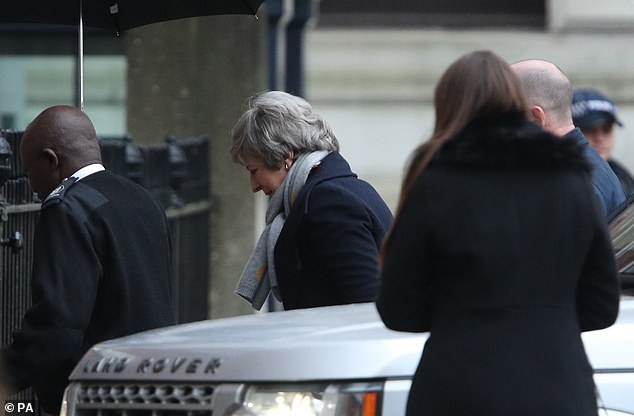 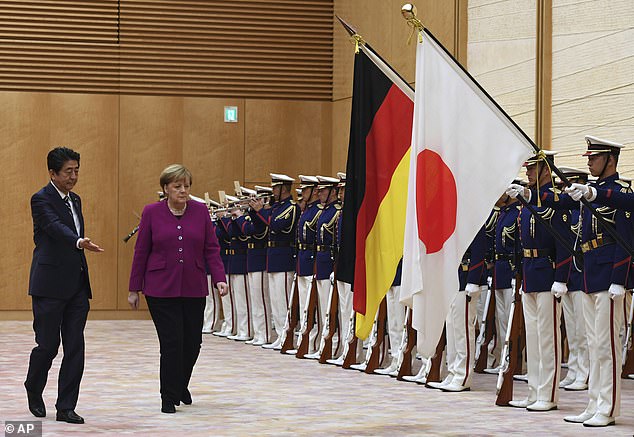 Mr Abe said it was ‘necessary to minimise the risk of Brexit on the European and World economy’. ‘We must avoid a no-deal Brexit,’ he added.