Angelina Jolie looks glamorous in a white frock at Toronto

She had a busy Monday at the Toronto International Film Festival, taking her six kids with her for the screening of her new film, First They Killed My Father.

But Angelina Jolie appeared to want to avoid the spotlight when she was spotted leaving a building by the fire escape stairs to a waiting car in the Canadian city on Tuesday.

The 42-year-old actress, director, producer and humanitarian looked stunning in a Jackie O-style white dress that she teamed with a chic beige duster coat and matching high heels.

Glamming it up: Angelina Jolie looked chic in a white fitted frock and beige duster coat as she made her way down the fire escape stairs of a building in Toronto, Ontario on Tuesday 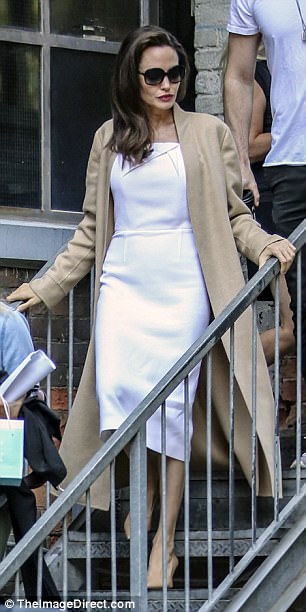 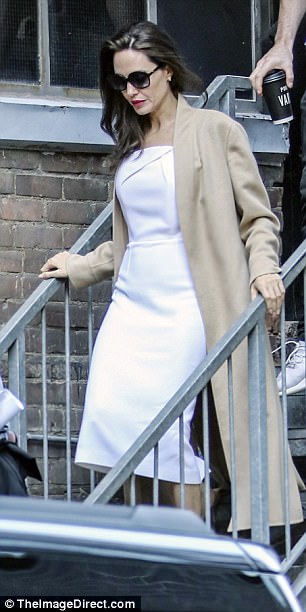 Set for her next engagement: The white sheath dress perfectly complemented her slender figure as she made her way down the fire escape to a waiting car

Her long brunette tresses cascaded over her shoulders and she was perfectly made up for her outing with pouty red lipstick and her eyes covered by sun glasses.

There was no sign of the children that Angelina shares with estranged husband Brad Pitt –  Maddox, 16, Pax, 13, Zahara, 12, Shiloh, 11, and nine-year-old twins Knox and Vivienne.

All of her brood joined her for the screening of the movie that she directed and produced. 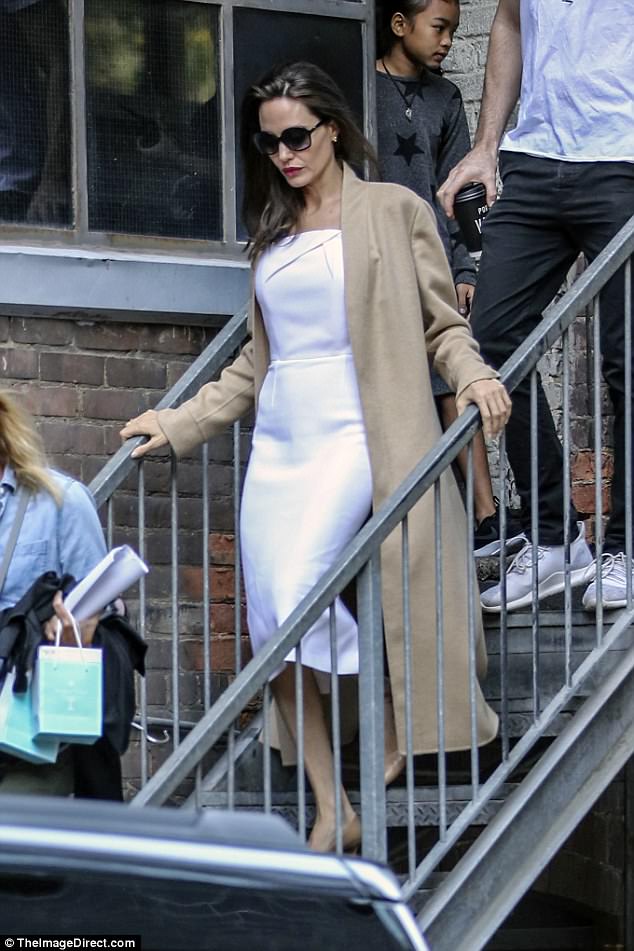 Glam slam: Her long brunette tresses cascaded over her shoulders and she was perfectly made up for her outing with pouty red lipstick and her eyes covered by sun glasses 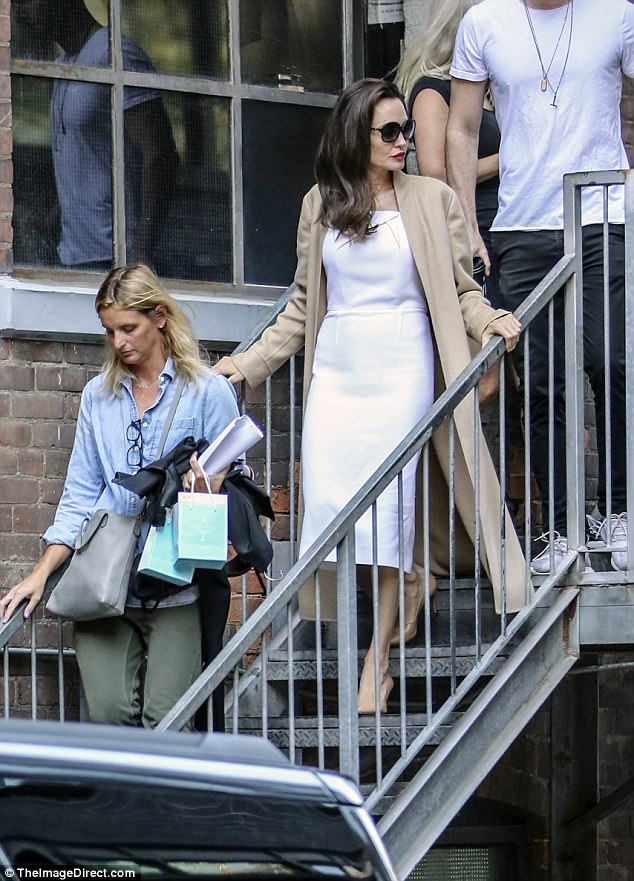 Looking great: The 42-year-old actress, director and producer is in the Canadian city for the Toronto International Film Festival where her film, First They Killed My Father aired on Monday 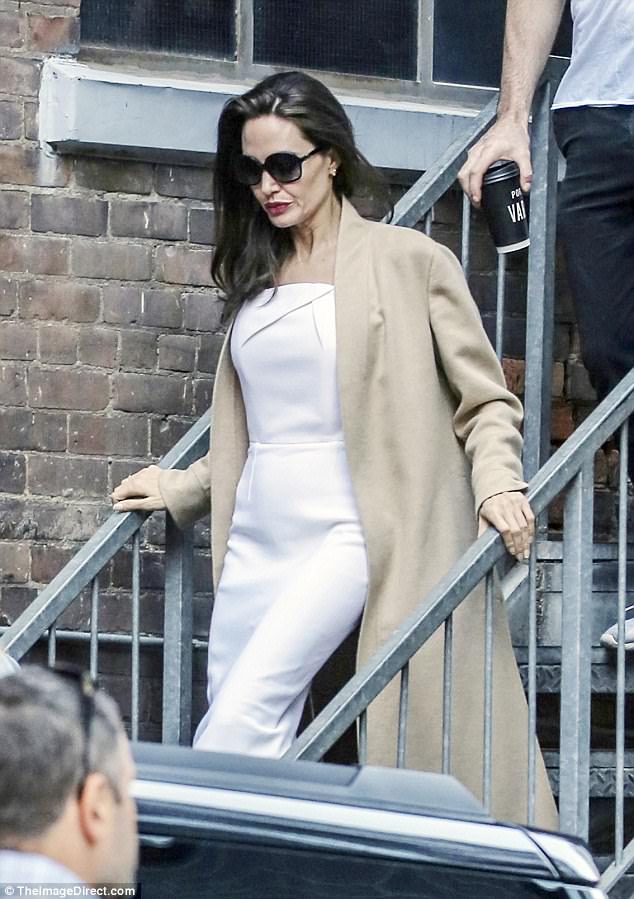 Sans kids: There was no sign of the children that Angelina shares with estranged husband Brad Pitt

Based on the memoir by Luong Ung, it tells the story of the Cambodian genocide through the eyes of a child.

She worked alongside her eldest sons, Maddox and Pax, on the film.

Maddox was adopted from the country while Pax hails from Vietnam, and the star revealed it was a ‘joy’ to have her children on board.

Speaking to Entertainment Tonight Canada, Angelina said: ‘It was a joy.

‘I want them to have a strong work ethic. When I looked over and I saw [Maddox] and Pax working with the other crew […] it was just wonderful.’ 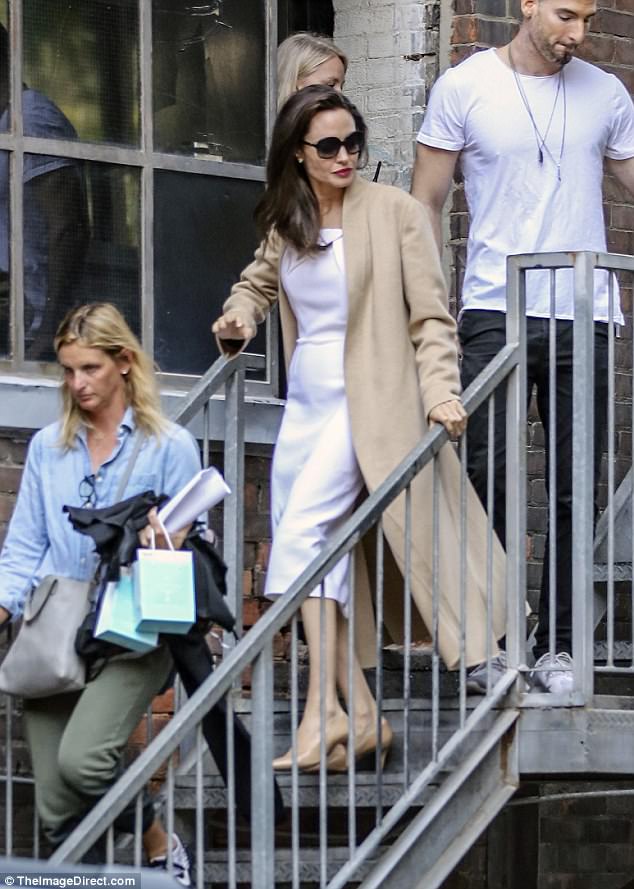 She sure is getting a lot of attention: The sighting comes after several appearances in the Canadian city for her projects

Aside from the screening, Angelina also spoke at The Women In The World Canada Summit, where the lineup included Canadian Prime Minister Justin Trudeau.

Over the weekend the star also talked about why she took up acting.

The Maleficent star – who is the daughter of actors Jon Voight and the late Marcheline Bertrand – was encouraged to follow in her parents’ footsteps by her mom and one of the reasons why she pursued it as a career was because she knew how happy it would make her mother.

‘I grew up around film and I grew up in a town where film was so important that it’s all anyone talked about. It was the thing to be,’ the Oscar winner began. 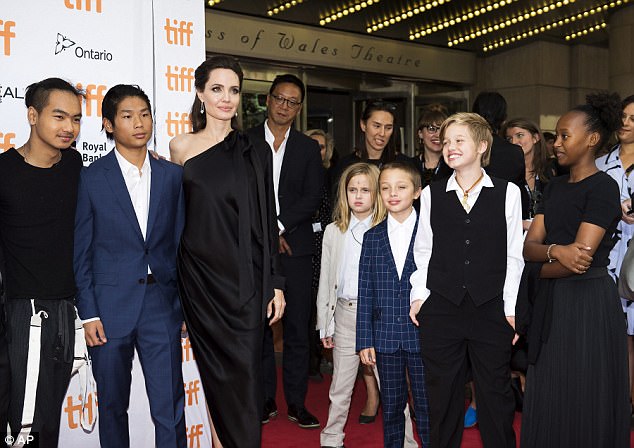 With her brood: From left, Maddox, 16, Pax, 13, Angelina,  twins Vivienne and Knox, nine, Shiloh, 11, and Zahara, 12, at a Toronto screening of First They Killed My Father on Monday 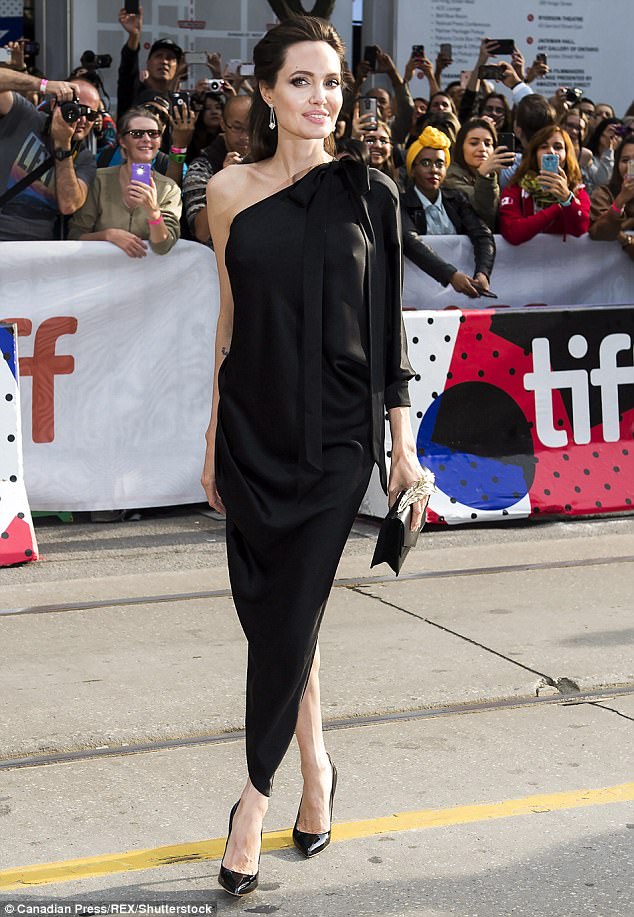 ‘I did start to get into acting and I did it partially because it was something to do with my mom and it made her so happy,’ she said. 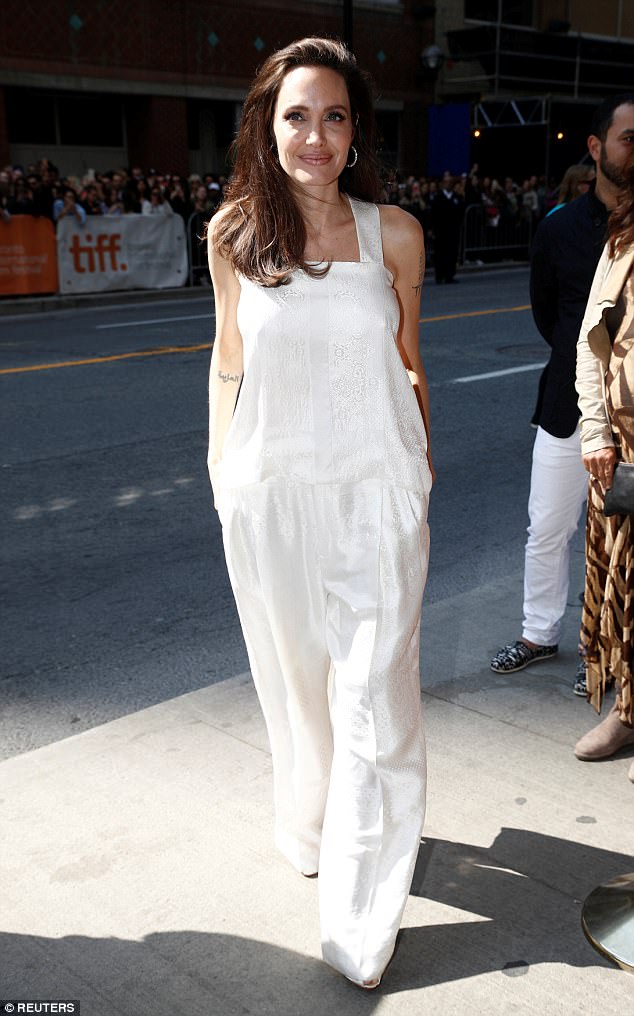 Back in white: Jolie arrives on the red carpet for the film The Breadwinnerat the Toronto International Film Festival on Sunday

Speaking at an In Conversation With event at the Toronto International Film Festival (TIFF), she said: ‘I realized when my mom passed away that it was something I was very much something I was doing for her and it changed a little bit.

‘I haven’t done much since she passed away, in front of the camera. Now I do it for my kids. And I do love it! It is fun! Who doesn’t love to get silly?’

Last week the star told The Hollywood Reporter and Deadline that she will return to acting after a one year break to spend time with her kids after her September 2016 split from Brad Pitt.

The star said she will likely do the sequel to Maleficent for Disney. It is believed filming will begin before the end of the year. 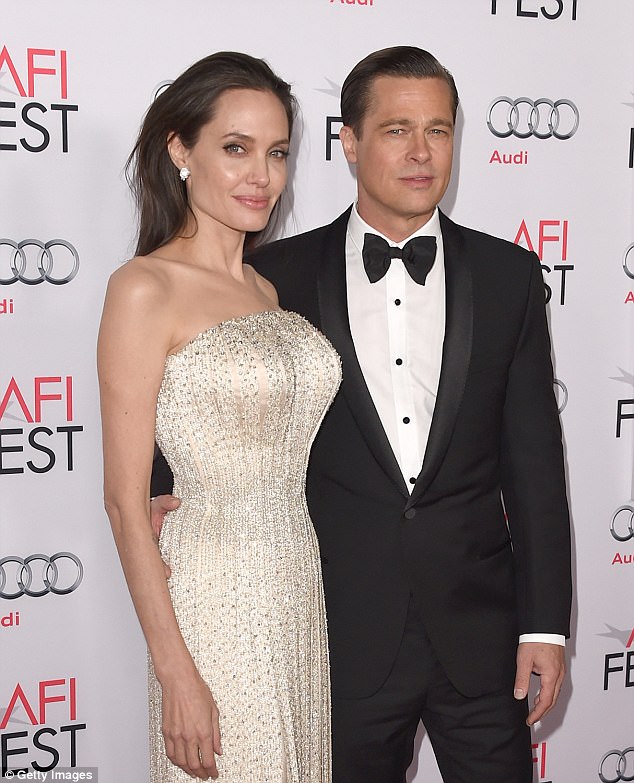 A year ago they ended it: The Jolie Pitts are coming up on the anniversary of their split; seen here in 2015