‘What are we, monsters? Bring back the Coke’: JetBlue ditches Coca-Cola from its flights in favor of rival drink Pepsi – and some passengers are fizzing with rage

JetBlue has incurred the wrath of Coca-Cola fans after ditching the drink from its carts in favor of bitter rival Pepsi.

From June 3, the New York-based carrier will make the switch to Pepsi products as part of an update of its onboard refreshment service.

But some passengers have reacted with fury to the swap with one demanding on Twitter that it ‘brings back the Coke’ and another claiming to be ‘devastated’.

According to USA Today, an internal communication to airline staff informed them of the new complimentary drinks line-up. Part of it read: ‘Most notably, this includes the introduction of Pepsi products to our offering beginning June 3.’

Twitter user ‘LDS’ was one who was left fizzing with rage, writing: ‘@JetBlue VERY disappointed in the change from Coke to Pepsi. You have to know people will have strong feelings about this, did it really save that much money?’

Nathan Esq said: ‘@JetBlue Pepsi? What are we, monsters? Bring back the Coke.’

Hannah tweeted: ‘Just found out that @JetBlue is switching from Coke to Pepsi products and honestly, I’m devastated.’

However, there were some Pepsi fans who were delighted with the switch, including singer and former American Idol contestant Clay Aiken.

He tweeted: ‘I just might have to start flying @JetBlue more now! Way to go! Join the @pepsi revolution! #holla #borninthecarolinas’.

There were some passengers who were delighted with the switch to Pepsi, including singer Clay Aiken

At the same time as introducing Pepsi, JetBlue will also begin pouring water from larger bottles to cut down on plastic waste and serve snacks and drinks at the same time on short-haul flights.

A spokesman for the airline told MailOnline Travel: ‘JetBlue is always looking for ways to refresh our onboard experience.

‘Starting June 3, we will offer a new selection of complimentary beverages on all JetBlue flights. 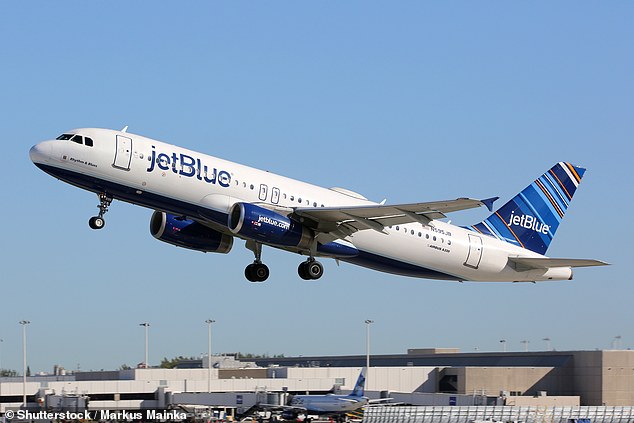 ‘We will share additional details in the coming weeks.’

Last month it was revealed that London will become the first European destination to be served by JetBlue.

It will launch daily flights from New York and Boston to London in 2021.

The new routes will be served by Airbus A321LR single-aisle aircraft featuring a version of JetBlue’s premium cabin, Mint.