Fowl play! Angry goose terrorises woman and even flies into car to attack her when driver comes to the rescue

An irate goose was determined to not let a woman get to work as it flew at her head and even got inside a car to attack her.

The woman approached her workplace in Brampton, Ontario, in Canada, with caution and gave the clearly angry goose a wide berth in the parking lot.

But despite her distancing efforts, the bird, who is protecting its nest, starts to fly at her head as she approaches the entrance.

A woman in Brampton, Ontario, in Canada, was attacked by an angry goose as she walked towards the entrance of her work

In a bid to help the woman, a driver in the car park quickly drives towards the bird which is unfazed and continues to attack her.

Desperate to escape from the bird, she ditches her bag on the floor and manages to open the passenger car door.

Terrifyingly the determined bird, which attacked the woman on April 19, then flies into the open car door and carries on flying at her before she is forced to push it out.

The geese in Brampton have made a name for themselves with repeated attacks on residents. 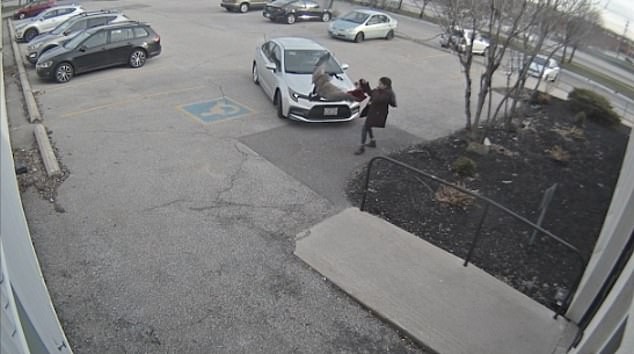 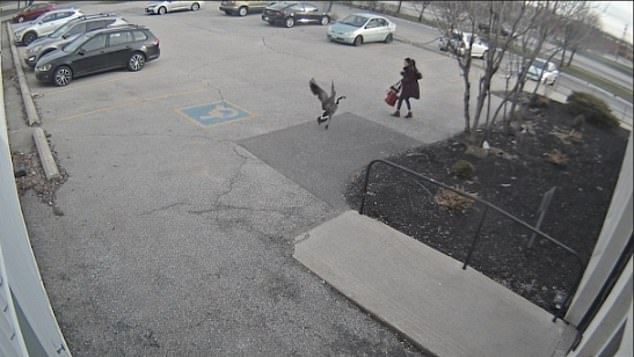 At the Peel Regional Police 22 Division station, Brampton Guardian reported officers were forced to set up 6ft-tall scarecrows to ward off a pair of nesting geese, affectionately named by the staff as Casey and Gary.

Constable Akhil Mooken said: ‘Our feathered friends have been a welcome part of our team for a long time.’

He said the police try to ensure the geese and residents can live together peacefully but the geese ‘seem to have other ideas’.

Other Canada geese have settled at other stations in the city.