Brett Kavanaugh denied allegations that he sexually assaulted Christine Blasey Ford when both were high school students and angrily told Congress that Democrats were engaged in “a calculated and orchestrated political hit”.

In her own testimony, Ms Ford told the same Senate Judiciary Committee that she was “100%” certain a drunken young Mr Kavanaugh had pinned her to a bed, tried to remove her clothes and clapped a hand over her mouth as she tried to yell for help.

She described “uproarious laughter” by Mr Kavanaugh and his friend, whom she said was also involved in the alleged incident in a locked bedroom at a gathering of high school friends.

The Judiciary panel’s day-long hearing, an extraordinary Senate airing of long-ago and painfully personal memories, came as GOP support for Mr Kavanaugh’s ascension to Supreme Court lay in the balance.

Mr Kavanaugh vowed to continue his bid to join the high court, to which US president Donald Trump nominated him in July.

Now a judge on the District of Columbia Circuit Court of Appeals, Mr Kavanaugh seemed assured of confirmation until Ms Ford and several other accusers emerged in recent weeks. He has denied all the accusations.

“You may defeat me in the final vote, but you’ll never get me to quit, never,” he said in an irate voice.

Both Mr Kavanaugh and Ms Ford testified under sworn oath, leaving senators who will decide his fate and millions of Americans watching on television to parse whose version to believe.

In her three hours of testimony, Ms Ford’s tone was polite but firm as she detailed her accusations but offered no major new revelations.

Rachel Mitchell, a veteran sex crimes prosecutor from Arizona who asked all questions of Ford for the committee’s all-male GOP senators, seemed to elicit no significant inconsistencies.

During her testimony, Ms Ford, now 51, said of Mr Kavanaugh: “I believed he was going to rape me.” 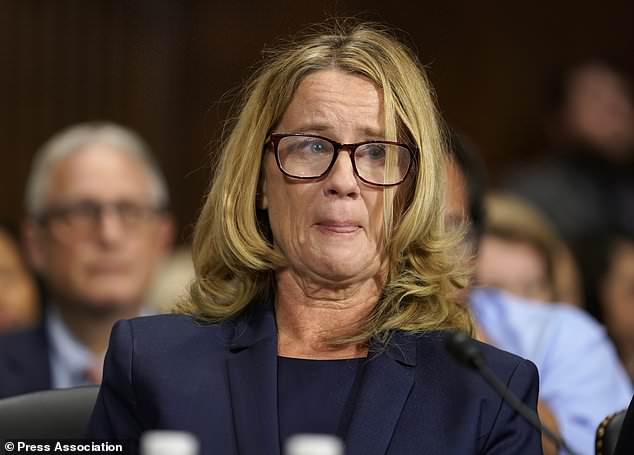 As deferential and hushed as Ms Ford’s delivery was, Mr Kavanaugh’s was incensed and combative.

He repeatedly interrupted Democratic senators’ questions, including on whether he would support their bid for testimony by Mark Judge, the friend whom Ms Ford has claimed participated in Mr Kavanaugh’s assault on her.

When Senator Richard Durbin pressed him to request an FBI probe, Mr Kavanaugh said he would do whatever the committee wished and repeatedly refused to change that position.

Mr Trump and Republicans have refused to bring the FBI into the matter.

“I want to know what you want to do,” Mr Durbin said in an exchange that grew progressively louder.

Later, he twice answered, “Have you?” when Senator Amy Klobuchar asked if he had ever passed out drinking. He later apologised to her.

The emotional tone continued as Senator Lindsey Graham, one of Mr Kavanaugh’s strongest backers, lashed out at Democrats.

“What you want to do is destroy this guy’s life, hold his seat open and hope you win in 2020,” he said, referring to that year’s presidential election.

Republicans are pushing to seat Mr Kavanaugh before the November midterms, when Senate control could fall to the Democrats and a replacement Trump nominee could have even greater difficulty.

Mr Kavanaugh, 53, struggled to hold back tears, particularly when he referred to his own family, and said that his family and his name had been “totally and permanently destroyed”.

Asked about drinking in high school, he said he had, sometimes to excess. “I like beer,” he said, but he also said he had never passed out and never attacked Ms Ford. “I have never done this to her or to anyone,” he said. 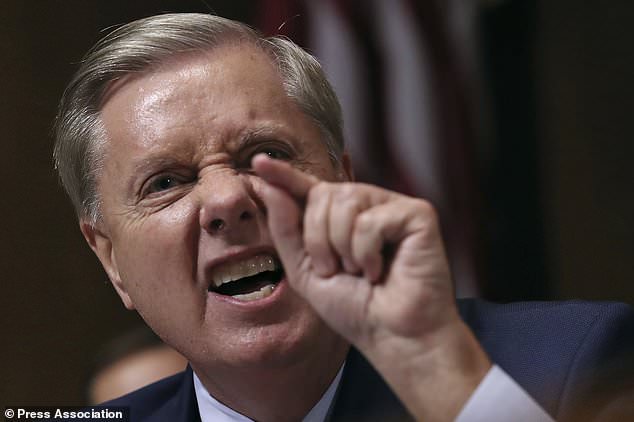 But he moved beyond simple denials, accusing Democrats of targeting him to assuage political grudges.

“This whole two-week effort have been a calculated and orchestrated political hit fuelled with apparent pent-up anger about president Trump and the 2016 election,” he said, adding that they were seeking “revenge on behalf of the Clintons and millions of dollars in money from outside left-wing opposition groups”.

“You have replaced ‘advice and consent’ with ‘search and destroy,” he told the senators, referring to the Constitution’s charge to senators’ duties in confirming high officials.

During Mr Kavanaugh’s 45-minute opening statement, senators watched intently, the only sound the clicking of cameras. In the front row, family and friends quietly cried including his wife, Ashley, whose lips were trembling.

Among the television viewers on Thursday was Mr Trump, who has mocked the credibility of Mr Kavanaugh’s accusers. The president watched aboard Air Force One as he returned to Washington from the United Nations, said White House spokeswoman Sarah Huckabee Sanders.

As the hearing concluded after more than eight hours, Mr Trump tweeted his approval of Mr Kavanaugh’s performance, saying he “showed America exactly why I nominated him”, and calling his testimony “powerful, honest, and riveting”.

Judge Kavanaugh showed America exactly why I nominated him. His testimony was powerful, honest, and riveting. Democrats’ search and destroy strategy is disgraceful and this process has been a total sham and effort to delay, obstruct, and resist. The Senate must vote!

He added: “Democrats’ search and destroy strategy is disgraceful and this process has been a total sham and effort to delay, obstruct, and resist. The Senate must vote!”

Ms Ford, a California psychology professor, spoke carefully and deliberately during the hearing, using scientific terminology at one point to describe how a brain might remember details of events decades later.

The boys’ laughter was “indelible in the hippocampus”, she said, using her scientific expertise to describe how memories are stored in the brain and adding: “It’s locked in there.”