This is the shocking moment a Mercedes driver demands paramedics move their ambulance so he can get past – despite them helping a patient.

The man mouths off at the medics as they respond to an emergency in Earl’s Court, west London.

The ambulance is parked with its lights on and back door ajar while other cars wait patiently on upmarket Hogarth Road.

But the Mercedes driver stomps over to the paramedics and confronts them as they help an injured woman into the vehicle.

The man mouths off at the medics as they respond to an emergency in Earl’s Court, west London

Wearing a t-shirt and shorts, the man throws his arms around dramatically as he lays into one of the NHS heroes.

He continues his shameful rant as another driver records him and labels him ‘a complete d***head’ during the four-minute clip.

He adds: ‘This is what happens when you’re a complete a**e in a Merc. 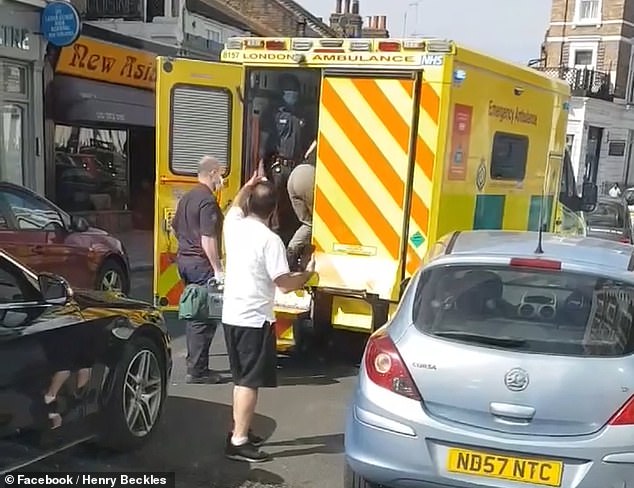 Wearing a t-shirt and shorts, the man throws his arms around dramatically as he lays into one of the NHS heroes

‘Come down the road, see an ambulance, with the lights flashing, and then trying to beep up the place and get the man to move.

‘Just cos the man’s driving a big Merc. And then he’s pulling out his video talking about he’s going to report the ambulance people. This man’s a complete fool.’

One of the paramedics speaks to the aggressive driver, before the ambulance pulls away and the Mercedes races off. 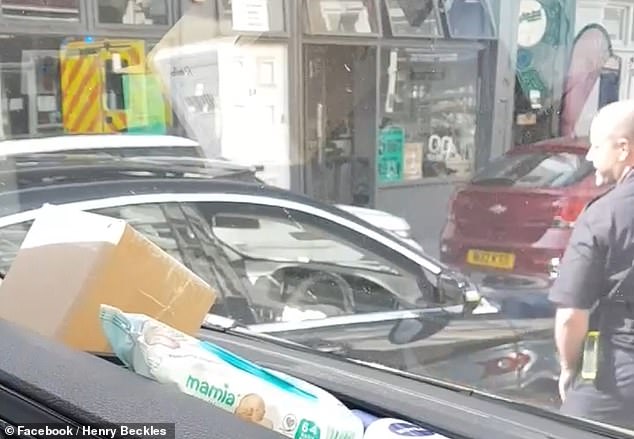 One of the paramedics speaks to the man, before the ambulance pulls away and the driver races off

Henry Beckles uploaded the footage on Facebook on Saturday with the caption: ‘So this k**b decides to go right up behind a parked ambulance with flashing blue and red lights on and then proceeds to beep his horn at the parked emergency vehicle so he can get past.

‘What a jockey. Then he takes out his phone so he can report the ambulance for blocking the road.’

A London Ambulance Service spokesperson said: ‘When responding to seriously ill and injured patients we prioritise getting to their side as quickly and as safety as we can.

‘On occasion this may mean that other road users are temporality obstructed but we do not expect our crews to be verbally or physically assaulted when this happens.

‘This is not part of the job.’