An animal lover risked her life by plunging into a frozen lake to rescue a drowning dog after England endured the coldest night of its winter so far – with warnings of wind and rain now on the way.

The hero jumped into the icy waters after spotting the hound frantically paddling 20 yards away from a lake’s embankment in Hull’s East Park.

Onlookers said the unidentified woman forced her way through blocks of ice to reach the canine, believed to be a white bulldog, before dragging it back to safety on Sunday – just hours after the country braved its coldest night of the winter so far.

A low of minus 11.7C (10.9F) was recorded at Chillingham Barns in Northumberland in the early hours of Sunday morning, the Met Office said. 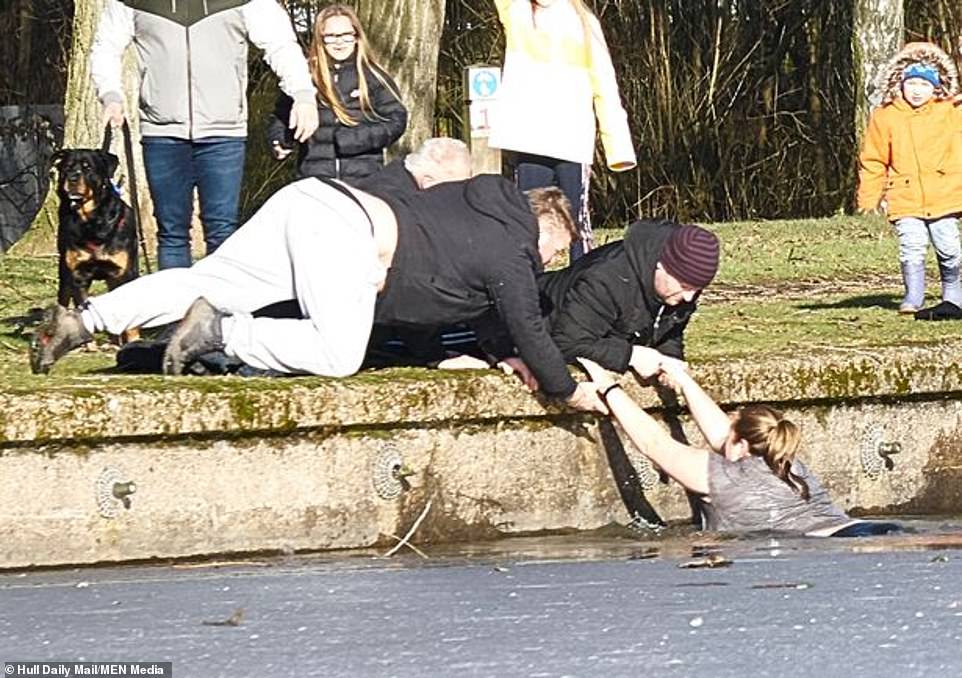 The unidentified woman, who dove into the freezing lake wearing only a t-shirt and trousers, has been lauded a hero

An eyewitness to the rescue said: ‘I think an old gentlemen lost his dog and it had jumped in the lake and couldn’t get back out.

‘The dog became really distressed, the water must have been very cold and freezing.

‘A woman then came along, broke the ice in front of her and jumped in. She swam 20 yards out into the middle of the lake and then brought the dog back with her.

‘I heard all the commotion, looked over and just got in the water and broke the ice to get to the dog.’

The woman, who dove into the freezing lake wearing only a t-shirt and trousers, has been lauded a hero. Park-goers helped her out of the lake and covered her with coats. 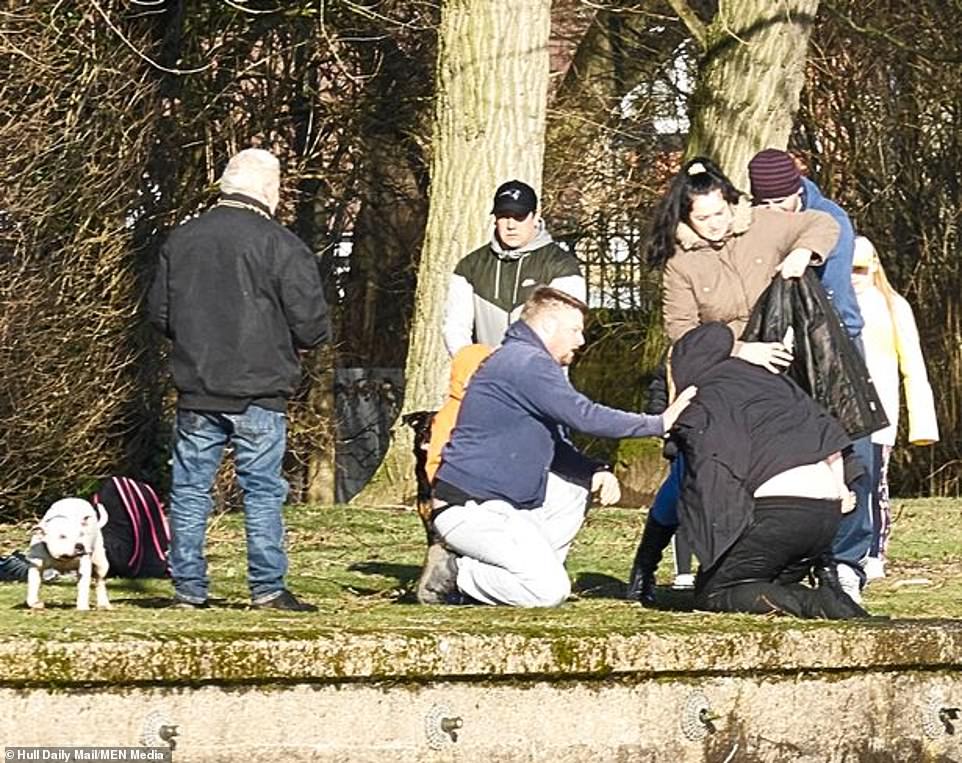 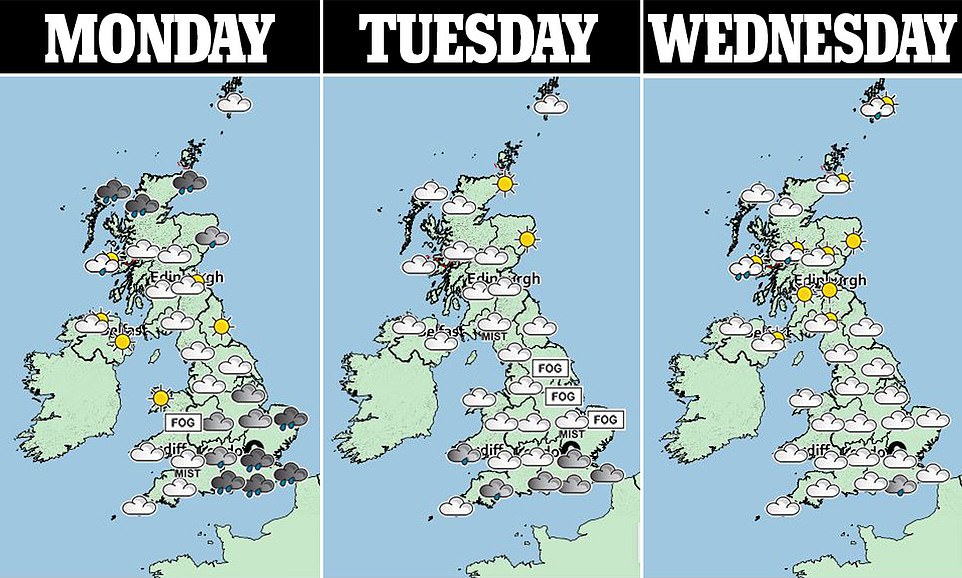 The rescue came as snow, ice and plunging temperatures caused treacherous conditions from Thursday and into the weekend across vast swathes of the UK.

A yellow weather alert was in place across much of Scotland from 9pm on Sunday until noon today. Up to 6cm of snow was expected to fall on higher ground.

But Met Office forecaster Simon Partridge said ‘things are gradually getting back to normal’ with wind and rain on the way for a ‘more traditional winter’.

‘It is definitely back on track in terms of temperature, where they should be for the time of year, back to a more traditional UK winter for at least a week,’ Mr Partridge said.

‘The rest of the week is just more unsettled weather.’ 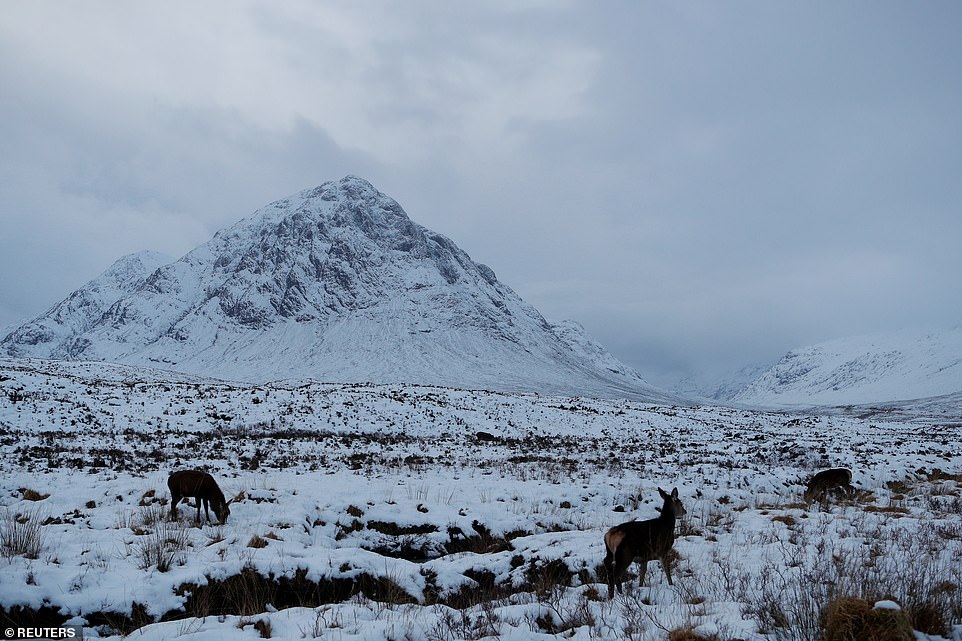 A yellow weather alert was in place across much of Scotland from 9pm on Sunday until 12pm on Monday – with up to 6cm of snow expected on higher ground (Pictured, red deer roam near Buachaille Etive Mor, Scotland) 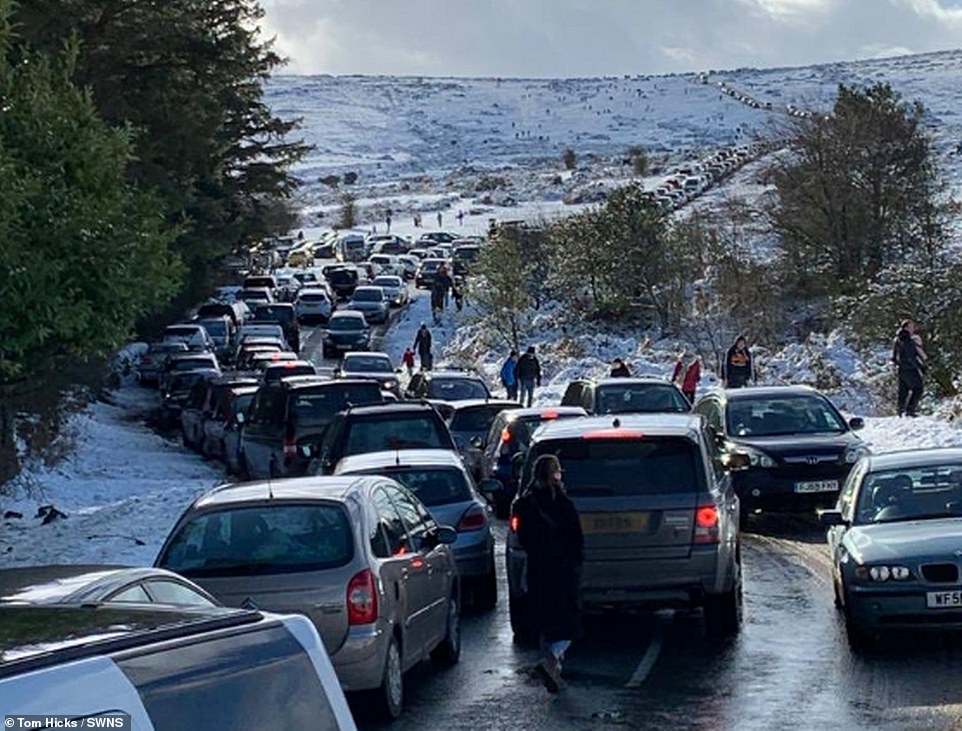 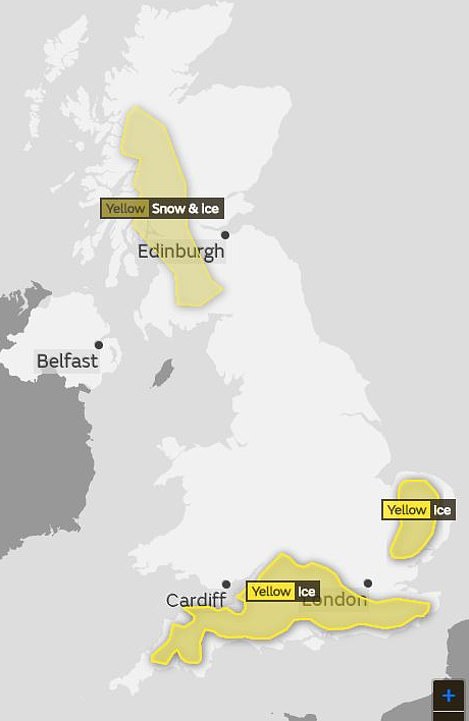 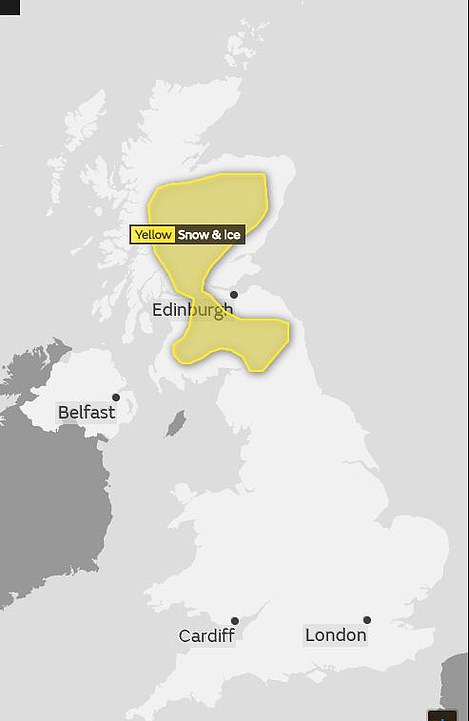 Yellow Met Office weather warnings for snow and ice were in place for many parts of the UK on Sunday (left). There is also one in place until noon on Monday in Scotland (right)

Temperatures reached bitter lows in Scotland over the weekend, with temperatures dipping as low as -16C overnight amid avalanches in the Highlands.

Drivers were warned not to travel on Sunday because of perilous black ice on British roads – after England had its coldest night of the year on Saturday with temperatures plunging to -12C.

But the weekend’s chilly conditions provided opportunities for some, with sledgers out in force in the Brecon Beacons and intrepid climbers making their way up a frozen lake in Derbyshire. 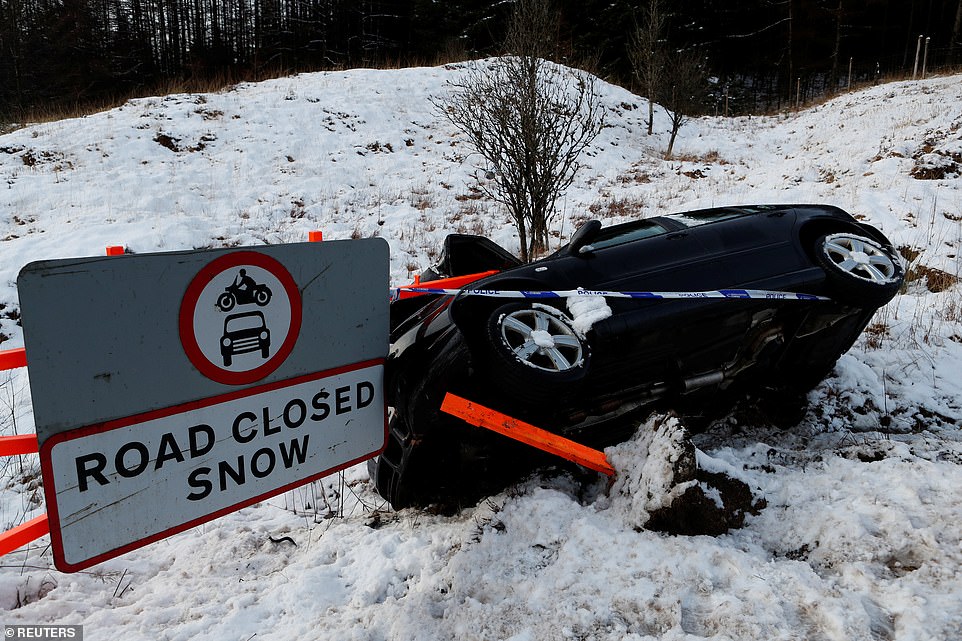 A crashed car lies at the side of the A82 near a road closed for snow sign in  Tyndrum, Scotland, on Sunday afternoon 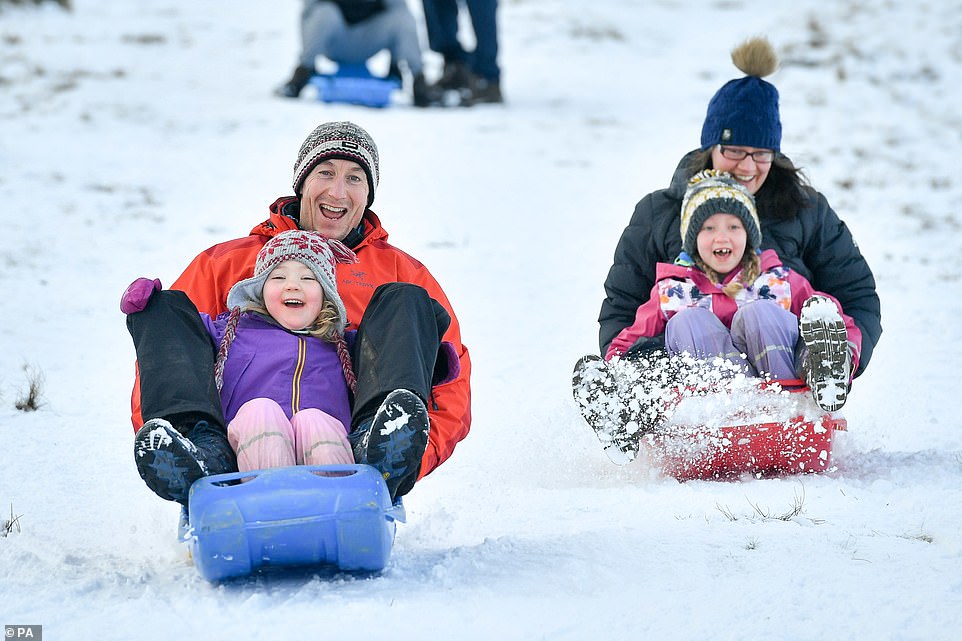 The chilly weather this weekend provided opportunities plenty of opportunities for fun, with the Neenan family taking the chance to go sledging down the hills of the Brecon Beacons National Park in Wales 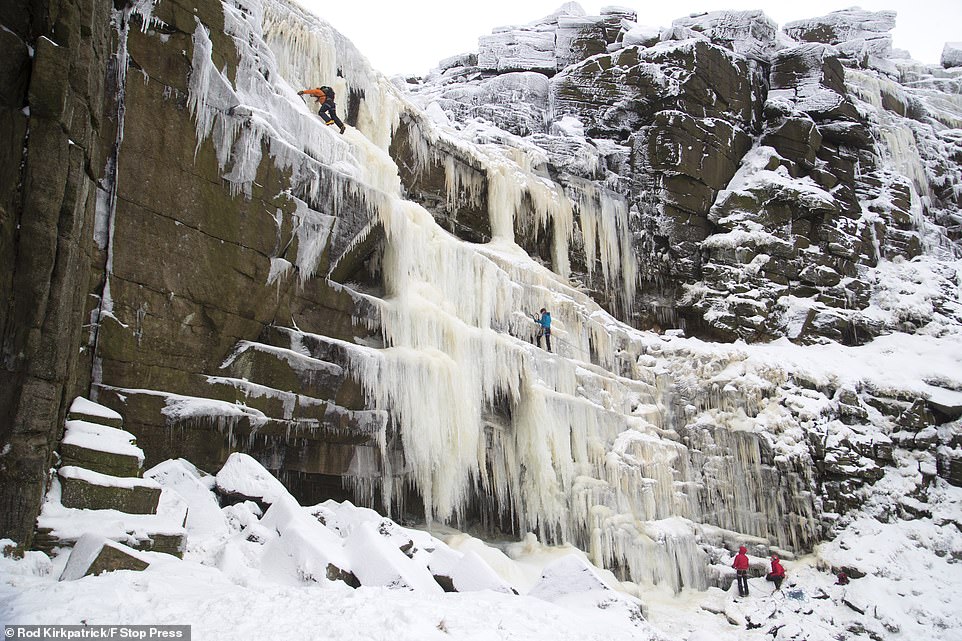 After one of the coldest nights of the year, ice climbers make their way up the frozen face of Kinder Downfall waterfall in Derbyshire on Sunday 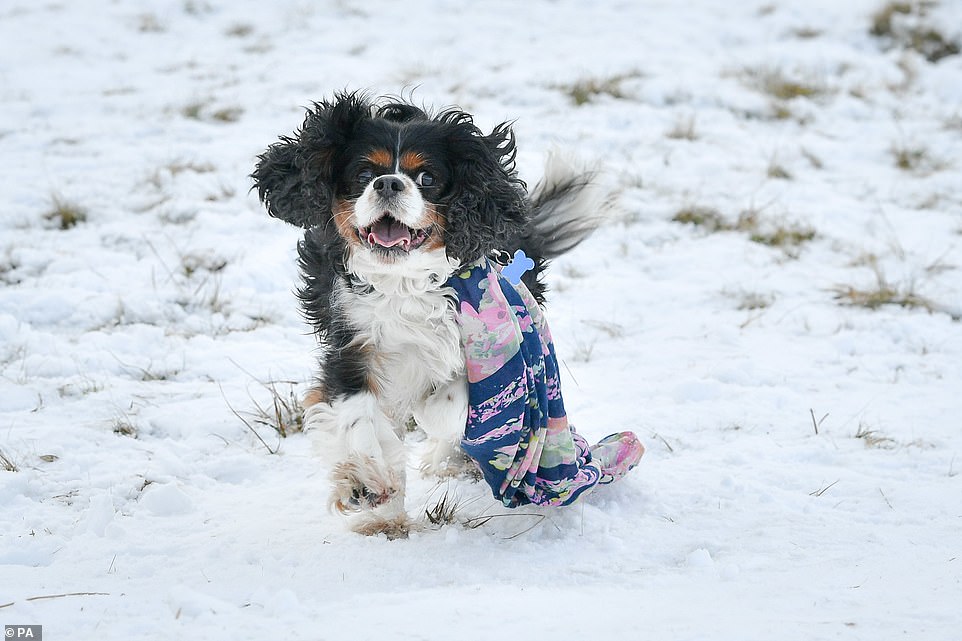 Meanwhile, drivers blocked one of the key roads out of Plymouth with parked cars as they left to explore the snowy surrounding countryside.

Issuing a warning to drivers, Met Office meteorologist Simon Partridge told The Telegraph: ‘The main concern is black ice on the roadways, and we simply need time to get to the most at-risk areas.

‘If you can travel later, please do. Today is a Sunday, thankfully, so there are expected to be fewer cars on the roads.’ 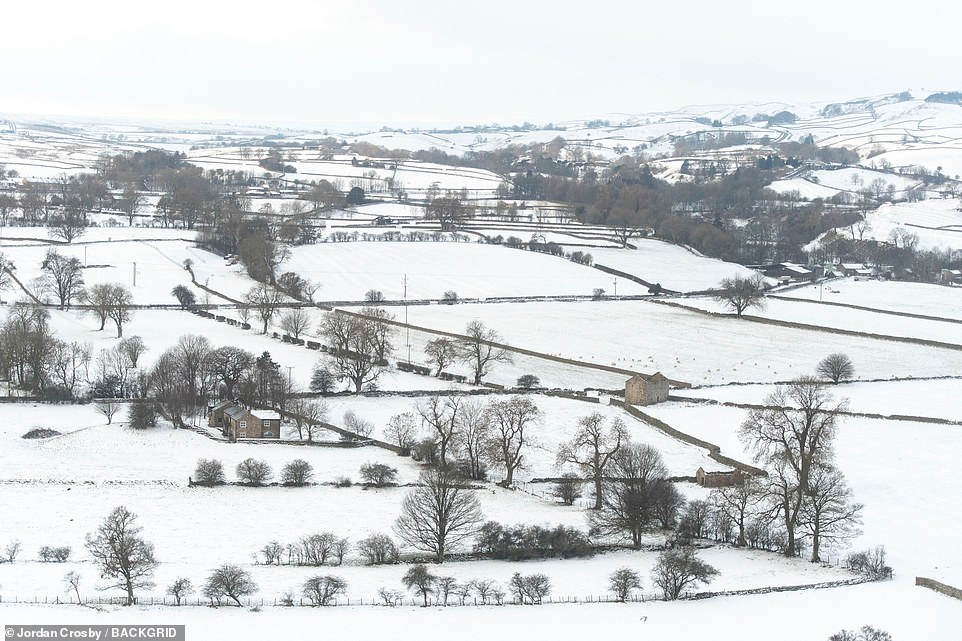 Residents of Middleton in Teesdale, County Durham woke up to snowy scenes today after temperatures dipped below freezing overnight on Saturday 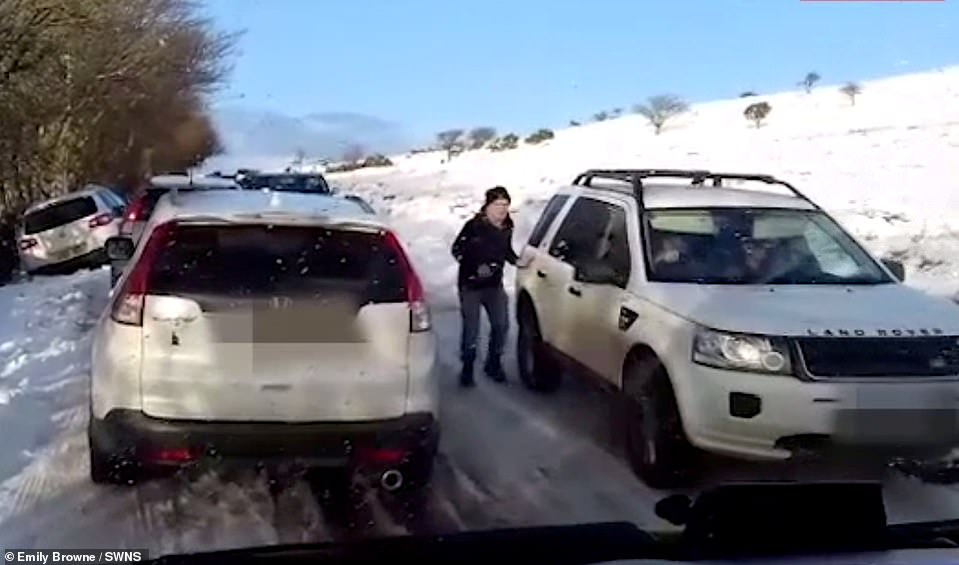 A view from the front seat of an ambulance trying to get from Plymouth from Princetown during a 999 call on Saturday, after visitors left their cars blocking the road. Ashley Rawlings waited an hour and a half for the ambulance after hurting his knee 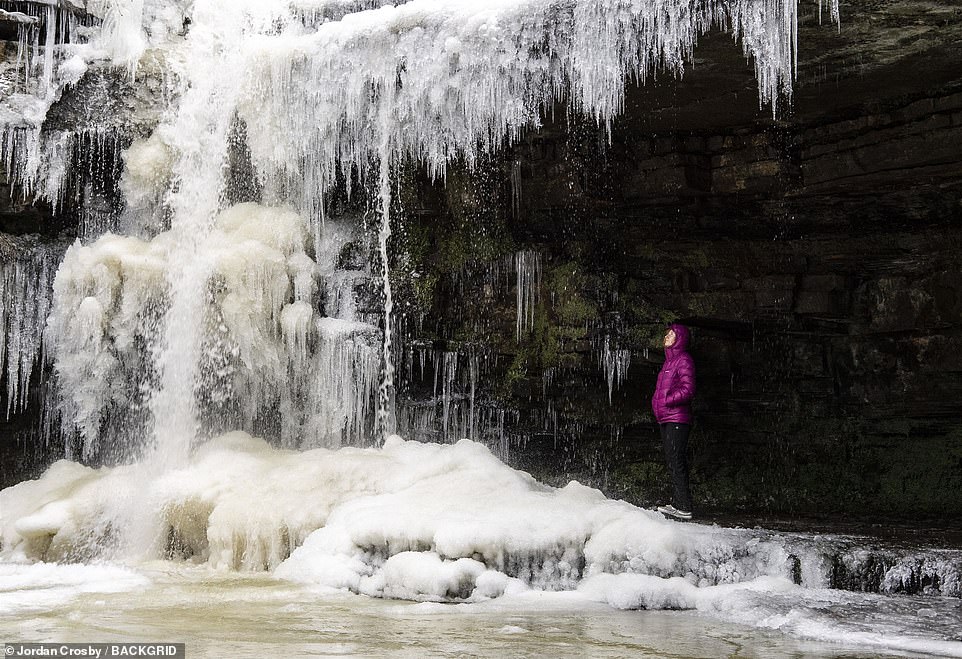 An intrepid walker admiring the spectacular icicles that had formed over Gibson’s Gave in Barnard Castle, County Durham, on Sunday morning

Drivers faced a heightened risk as grit cannot prevent water freezing at temperatures below -5C, according to the Department for Transport.

Some roads were also left blocked this weekend when around 200 trees collapsed under the weight of the snow.

Meanwhile, a dog walker risked her life in Virginia Water, Surrey, by leaping into a freezing lake after her pet got stuck in the ice. They both survived.

Double-digit lows were recorded on the east coast at Redesdale, where the mercury sank to minus 10.4C (13.3F), and at Leeming in north Yorkshire where a low of minus 10.8C (12.6F) was observed.

While Saturday was the coldest night of the year so far in England it was not as cold as parts of Scotland, where temperatures fell as far as minus 12.6C (9.3F) at Braemar in the Highlands. 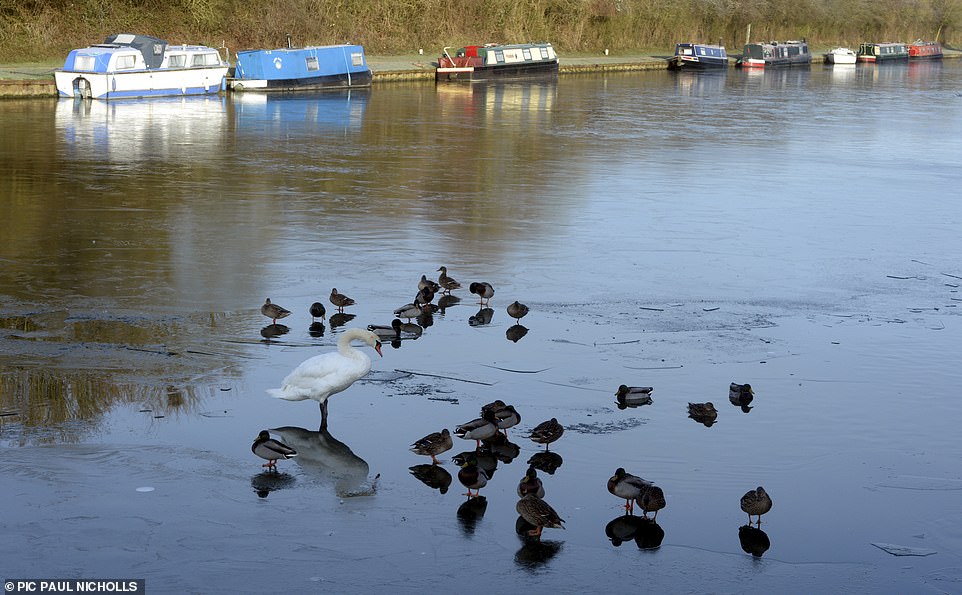 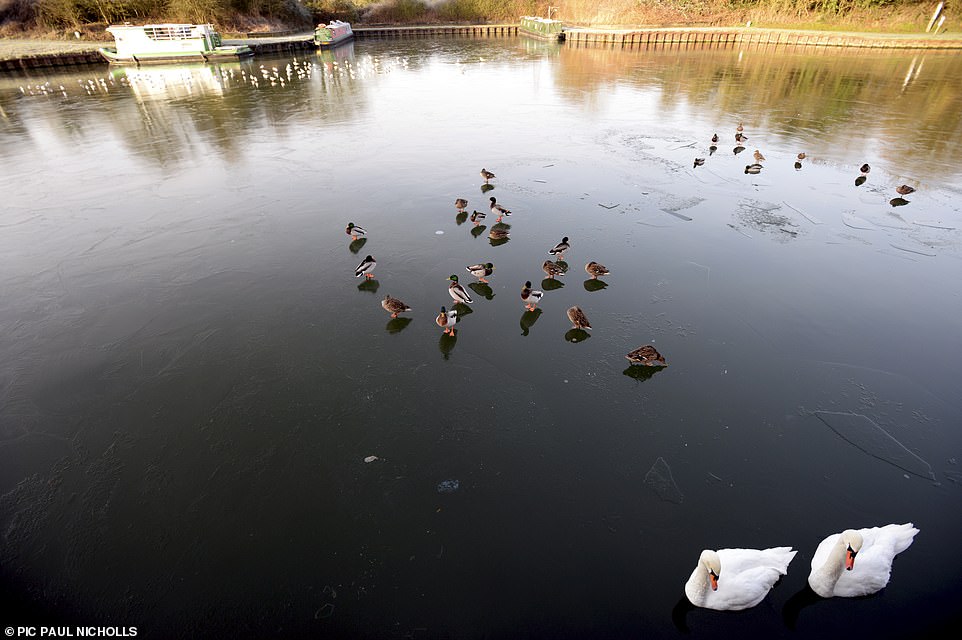