Animal rescuers today revealed they have saved 119 of the stranded sheep on board a ship which capsized off the coast of Romania three days ago, and hope to reach more survivors by drilling holes in the side of the vessel.

The Queen Hind overturned shortly after leaving the Black Sea port of Midia with 14,600 sheep on board.

Rescuers from the charity Four Paws boarded the ship yesterday, revealing footage of the grim conditions there.

Today they announced that 119 of the animals had been rescued in the last two days and were now being treated on a Romanian government-owned farm.

Survivors: Three injured and exhausted sheep rest after they were rescued from the ‘ship of death’ which capsized three days ago with 14,600 of the animals on board 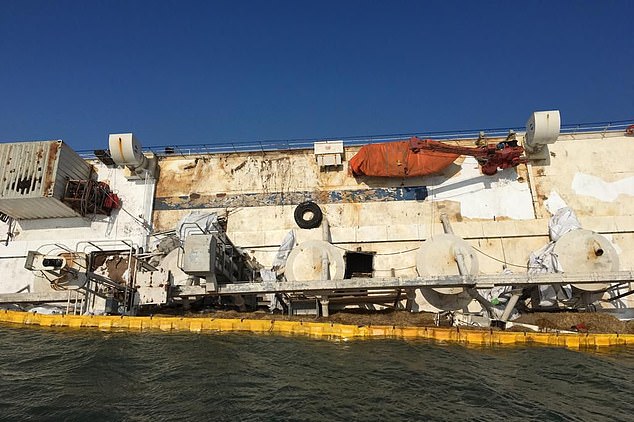 Overturned: The 260ft long cargo ship Queen Hind is seen in the water off the Romanian coast today as animal rescue workers battle desperately to save any surviving sheep 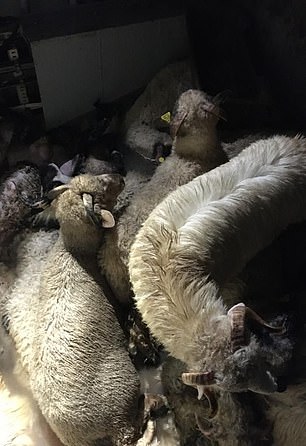 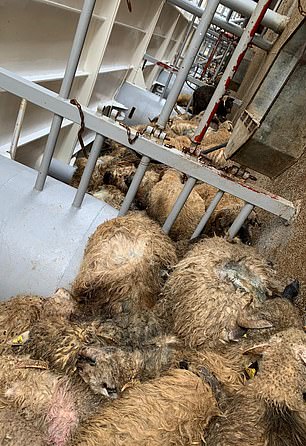 Horrific conditions: Rescuers from the charity Four Paws boarded the ship yesterday, revealing footage of the grim conditions on board

The animals were rescued by Four Paws workers along with specialists from the Romanian Inspectorate for Emergency Situations (ISU), the charity said.

More sheep may yet be found alive in compartments of the ship which have been inaccessible so far, it is hoped.

The charity and ISU are now hoping to drill holes in the body of the ship to reach more of the animals who may be trapped.

However, thousands are sure to have died and footage which emerged yesterday showed the surviving sheep clambering over mounds of lifeless bodies.

Other sheep were seen presumably drowned in pools of water which had overrun parts of the ship after it had capsized.

‘So far we have been able to rescue 119 sheep alive from the ship,’ said Four Paws’ UK director Brian da Cal.

‘Many are wondering what would happen to the animals, and we have good news: all 119 of them have already been brought to safety and are currently being treated and cared for on a farm.

‘Once the rescue mission is over, we will consider what will happen to them and how we can make sure they are well.

‘The next mission is already underway, and it is even more difficult than the previous ones: since some areas of the ship have been rendered inaccessible by the incident, our team now has to drill openings in the locked holds.

‘No one knows what awaits us behind these walls, but we hope to find sheep alive inside!’. 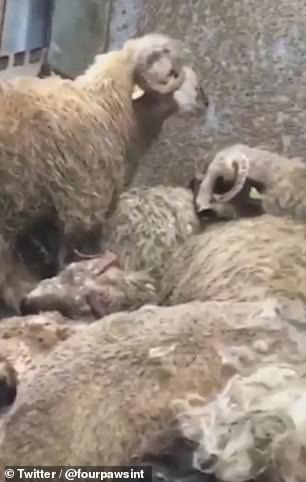 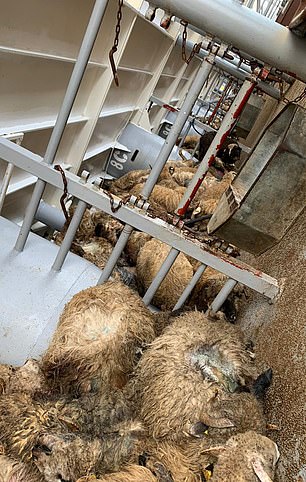 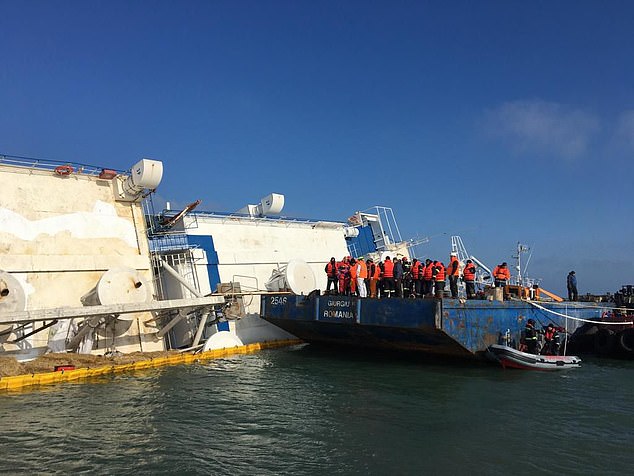 Rescue operation: People prepare to board the overturned vessel today as animal rescue workers revealed they had saved 119 of the 14,600 sheep on board 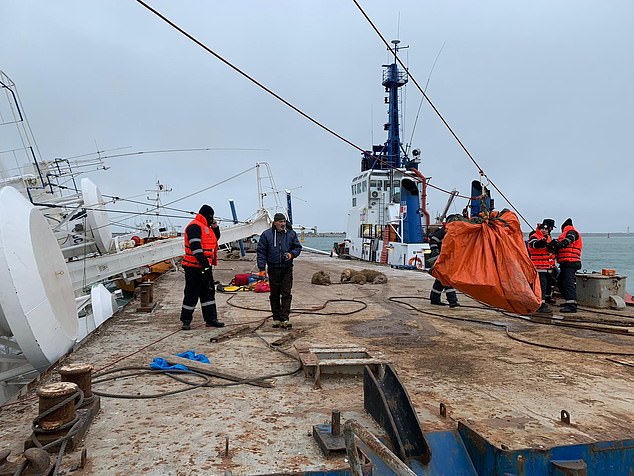 ‘The decision about the future of the sheep that survived will be made after the last alive animals are rescued,’ he added.

Four Paws said it would ‘fight to ensure that the rescued sheep find a suitable solution and protection, without further exploitation from humans.’

Yesterday Kuki Barbuceanu of the Animal Rescue and Care charity said most of the dead animals had probably fallen into water when the ship listed.

It has not yet been possible to move the Queen Hind back towards the Black Sea port, because it is still listing.

The crew of 20 Syrians and one Lebanese were rescued along with 32 of the sheep after the ship capsized a short way into its journey to Saudi Arabia.

Mihaita Gheba, chief of the local veterinary authority, said the dead sheep would be burned while surviving ones would be returned to the breeder.

It is not yet clear what caused the Palau-flagged vessel to capsize, but the case has drawn fresh attention to the controversial sea transport of livestock. 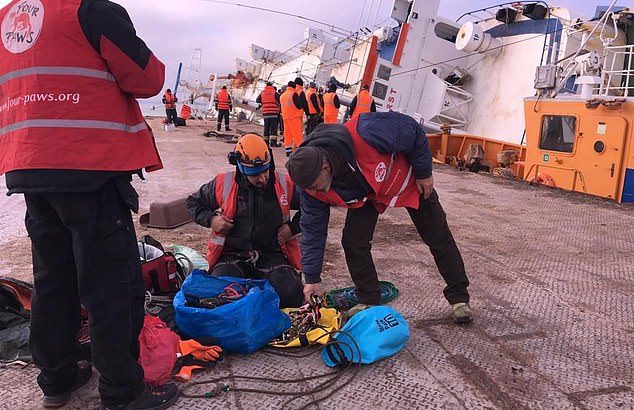 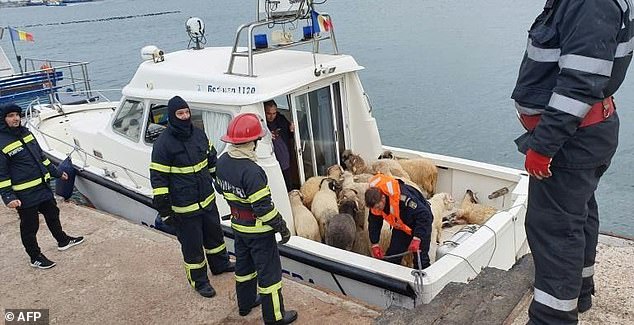 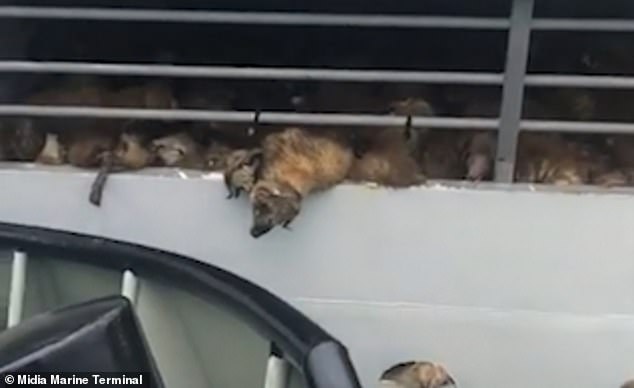 The Queen Hind capsized on Sunday shortly after leaving the Black Sea port of Midia with 14,600 sheep on board

The country’s main livestock breeders and exporters’ association Acebop has called for an urgent investigation, saying it was ‘shocked by the disaster’.

‘If we cannot protect livestock during long-distance journeys, we should outright ban them,’ Acebop president Mary Pana said in a statement.

Acebop has previously called for legal changes that would oblige transporters to improve conditions aboard livestock carriers.

Four Paws said it was demanding an ‘outright ban of long-distance transports of live animals and a maximum of eight hours transportation duration’.

The charity ‘calls on all member states of the European Union to suspend transport of live animals to third countries immediately,’ director da Cal said.

Gabriel Paun of Animals International has also called for an inquiry to be held ‘without delay’, alleging that the ship had been overloaded.

He added that the Queen Hind already had engine problems last December.

Romania joined the EU in 2007 and is the bloc’s third-largest sheep breeder and a top exporter, primarily to Middle Eastern markets.

The veterinary authority said in a statement that the vessel had fully complied with EU regulations and that sufficient space, food and water had been provided.

Activists have labelled the livestock transport vessels – about 100 of which leave Midia every year – ‘death ships’, saying sheep risk being cooked alive on board during the hot summer months.