In a string of messages posted to social media, the best-selling author lambasted the President for concentrating more on commonplace policy initiatives such as simplifying the tax code and lowering business taxes to 15 per cent instead of focusing on more populist objectives.

‘WTF! Why is @realDonald Trump back to tax cuts?,’ she asked incredulously. ‘His election was NOT about tax cuts.’

During last year’s presidential campaign, Trump repeatedly promised to build a southern border wall with Mexico and deport illegal immigrants from the country, which appealed to a huge swath of American voters.

Those position curried favor with more ideological factions of the Republican Party, as well, including Coulter, who wrote a book about the former casino magnate titled ‘In Trump We Trust.’

But on Wednesday, Coulter’s admiration for the commander-in-chief took another hit, taking her former ‘Emperor God’ to task for allegedly back tracking from his ‘Make America Great Again’ platform she claimed won him the 2016 election. 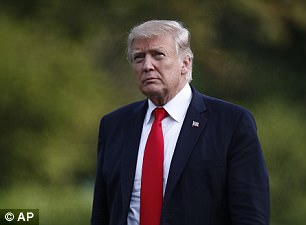 President Donald Trump walks from Marine One across the South Lawn to the White House in Washington, Wednesday

‘Tax cuts are a (second) term issue. 1st term: BUILD THE WALL, End DACA, Deport Illegals, No Refugees, No Muslims, Immigrn Moratorium. SAVE USA!,’ she wrote in another message.

This is not the first time Coulter has spoken out against the President.

Earlier this month, Coulter rebuked Trump for not adhering to his campaign promises in an interview with the Daily Beast soon after chief political strategist Steve Bannon was ousted from the White house.

‘The millions of people who haven’t voted for 30 years and came out to vote for Trump, thinking, “Finally, here’s somebody who cares about us” — Nope!’ Coulter said during the interview.

Coulter has also repeatedly accused Trump of trying to appease wealthy elites in Washington, claiming that Trump has been swayed away from his vision for the country by ‘Wall Street’ priorities.

‘Oh stop pretending this is about letting “families” keep more of their money. HALF OF AMERICANS DON’T PAY TAXES! This is for Wall Street,’ Coulter tweeted Wednesday.