Ann Widdecombe celebrates her Brexit triumph: Tory defector says a second referendum is now ruled out as ‘we’ve had it tonight’ after she is elected an MEP… but Boris’s sister Rachel Johnson loses

The Brexit Party’s Ann Widdecombe has been elected an MEP, declaring that the EU election results rule out a second referendum because ‘we’ve had it tonight’.

The former Conservative MP said that if Britain did not leave the EU then ‘the Brexit Party will do what they’ve done tonight in a general election’.

After defecting to the Brexit Party earlier this year, the 71-year-old has won a seat in the next European Parliament as a member for South West England.

Speaking after her victory she said: ‘I think what tonight does is first of all to get rid of the notion of a second referendum – that’s it, we’ve had it tonight.

The Brexit Party’s Ann Widdecombe (pictured) has been elected an MEP, declaring that the EU election results rule out a second referendum because ‘we’ve had it tonight’

‘But secondly it puts immense pressure on Westminster to get this sorted out.

‘People are fed up that the result of the 2016 referendum has not been implemented three years later.

‘They’re sending a big message to Westminster and saying we want this sorted out.

‘Tonight, we have got a very clear instruction from the British people that they are reaffirming the vote that they gave in 2016.

‘They want a Brexit and the only people who are going to deliver it are the Brexit Party.

‘A message to Westminster has come out loud and clear tonight which is: if you don’t Brexit you’ll be going against the will of the people and then the Brexit Party will do what they’ve done tonight in a general election.’

Miss Widdecombe entertained the nation as one of the most memorable dancers the show has ever seen when she paired with Anton du Beke in 2010.

Though no longer an MP, she had continued to be a member of the Conservative party before her defection earlier this year.

The former prisons minister served as an MP for Maidstone in Kent for 23 years.

Among other high-profile candidates, Jacob Rees-Mogg’s sister Annunziata was also elected an MEP.

However, Boris Johnson’s sister Rachel Johnson, who was running for Change UK, was defeated in her race. 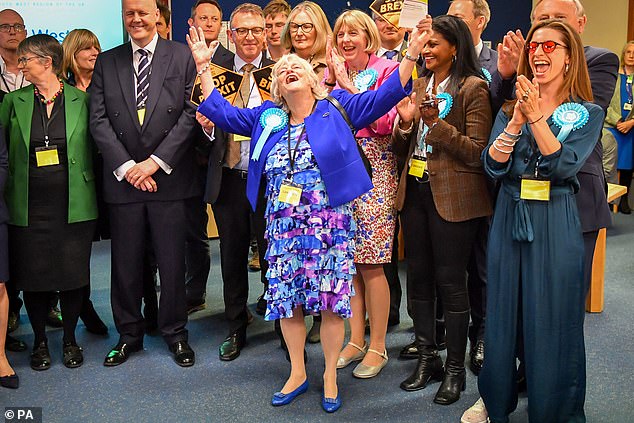 Annunziata Rees-Mogg said her brother Jacob would be ‘devastated’ after the Brexit Party won three European seats in the East Midlands.

After the result was announced in Kettering, the newly-elected MEP, whose party won 38.2 per cent of the vote, said the Conservatives were paying for the Theresa May ‘betraying’ the British people.

The Liberal Democrats also won a seat alongside Labour but the Tories returned no MEPs after polling just 10.7 per cent of the vote.

Ms Rees-Mogg described the the results as ‘quite astounding’.

She said: ‘They have been far bigger percentages than I had anticipated, although while I was on the streets in areas as diverse as Boston, Mansfield, Skegness and Chesterfield, the people were telling us they wanted to be listened to.

‘Today, they have had their voices heard and we will fight for them tooth and nail.’

Addressing how her brother will be feeling after a disappointing evening for the Conservatives, Ms Rees-Mogg said: ‘I have no doubt he will be devastated at what has been done to his own party, the Conservatives.

‘Theresa May has betrayed the British people. She made a lot of promises she didn’t stick to and unfortunately the whole party is paying for it.

‘We are the party that will be listening to them.’