Anna Wintour’s pregnant daughter Bee Shaffer has showed off her growing baby bump on Instagram for the first time after media broke their baby news earlier this month.

The 33-year-old is expecting her first child with her husband Francesco Carrozzini, whom she married in 2018 — with their baby set to be the third grandchild for Vogue editor-in-chief Anna.

And on Monday, Bee took to social media to officially announce the big news, posting an artful photo of herself cradling her baby bump in a maxi dress.

The announcement was met with a flood of congratulatory comments from fashionable friends, including Sarah Jessica Parker, Dianna Agron, and Lily Aldridge.

Happy news: Anna Wintour’s pregnant daughter Bee Shaffer has showed off her growing baby bump on Instagram for the first time after media broke their baby news earlier this month 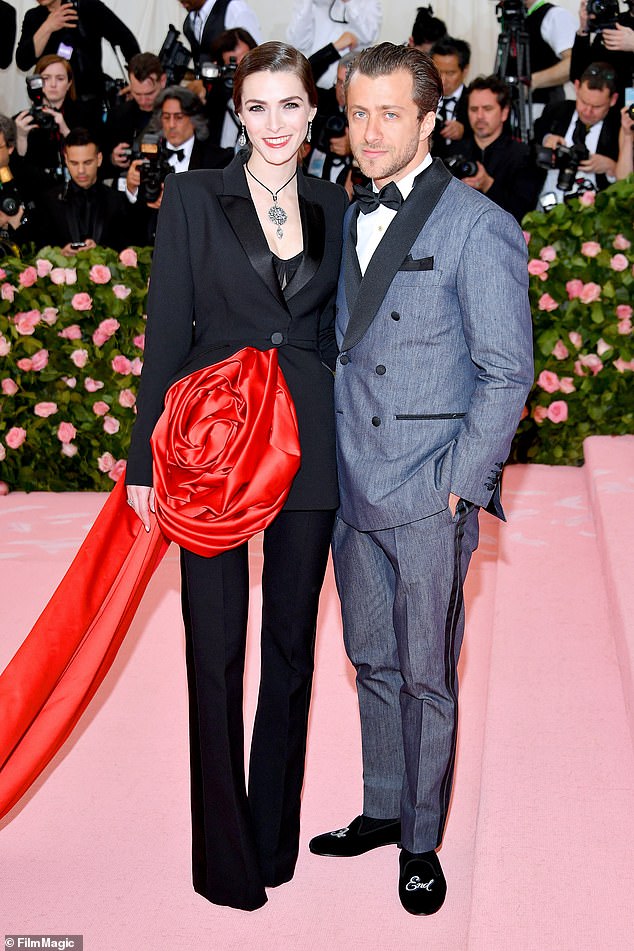 Baby makes three: Bee, 33, and her husband of three years, Francesco Carrozzini, 38, are expecting their first child together 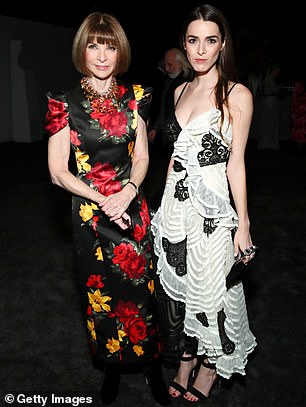 Bee’s baby will be 71-year-old Anna’s third grandchild. The mother-and-daughter are seen together in November 2018

In the Instagram photo, Bee stands backlit in front of a window, posing in profile for the camera.

Wearing a swishy maxi dress, she looks down and lovingly cradles her bump, appearing quite far along in her pregnancy.

Bee and her husband are enjoying a bit of a babymoon this month and have been photographed in Portofino, Italy, where Bee has turned the streets into her own maternity style runway.

The parents-to-be have been enjoying a romantic getaway in the seaside Italian town for the past week, clearly relishing their final few months as a family of two before their newest addition arrives. 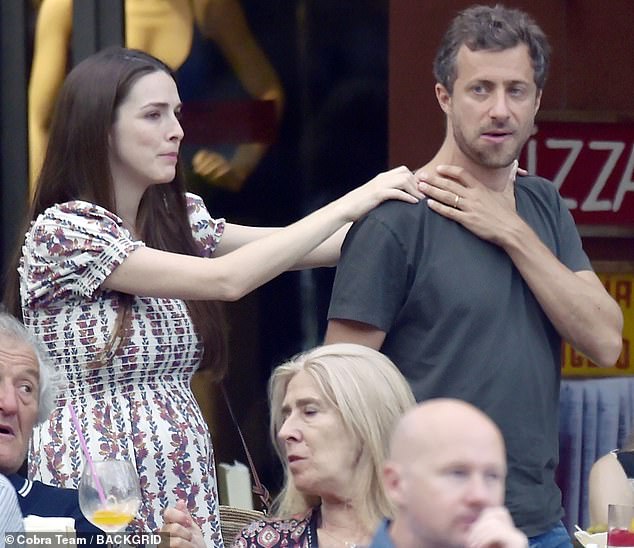 Style: The mother-to-be dressed her growing baby bump in a pretty floral dress 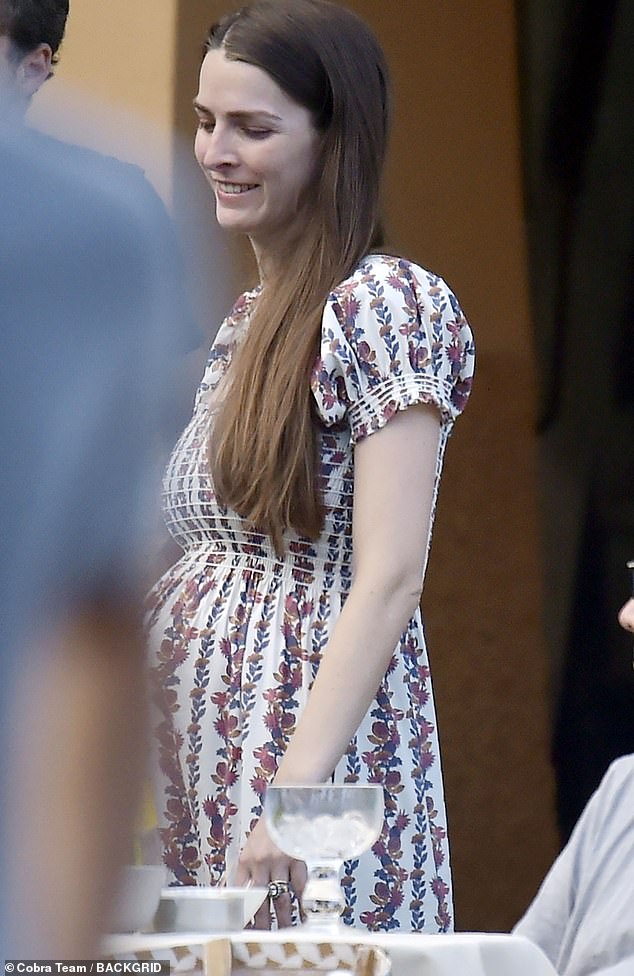 Comfy: The dress featured sweet puff sleeves and elasticated smocking around the chest

In images taken on Monday, Bee is seen cuddling up to her husband of three years, massaging his shoulders while dining out at a local restaurant.

The mother-to-be looked relaxed and happy in a pretty floral-print dress, which she paired with some simple sandals and allowed her long brunette locks to hang in a straight style around her shoulders.

That silhouette seems to be a firm vacation favorite for Bee, who was seen wearing a similar style on the previous day, this time opting for a sleeveless white design that was covered in dainty blue flowers.

The duo strolled along the cobbled streets of picturesque Portofino, with Bee toting a straw beach bag, while Francesco was carrying a paper shopping bag from men’s clothing store Sease, which specializes in ‘high-performance’ clothing.

Much like his wife, Francesco has also stuck with something of a capsule wardrobe during the trip, wearing patterned swim shorts and a T-shirt on almost every occasion that the couple has been pictured — although he shook things up in jeans when they were spotted out and about on Monday.

The couple has gone out to eat and also spent some time out on the water.

Unsurprisingly, Bee and Francesco have looked very much at home in Portofino during their vacation. Francesco spent much of his childhood in the area, splitting his time between the coastal spot and the city of Milan. 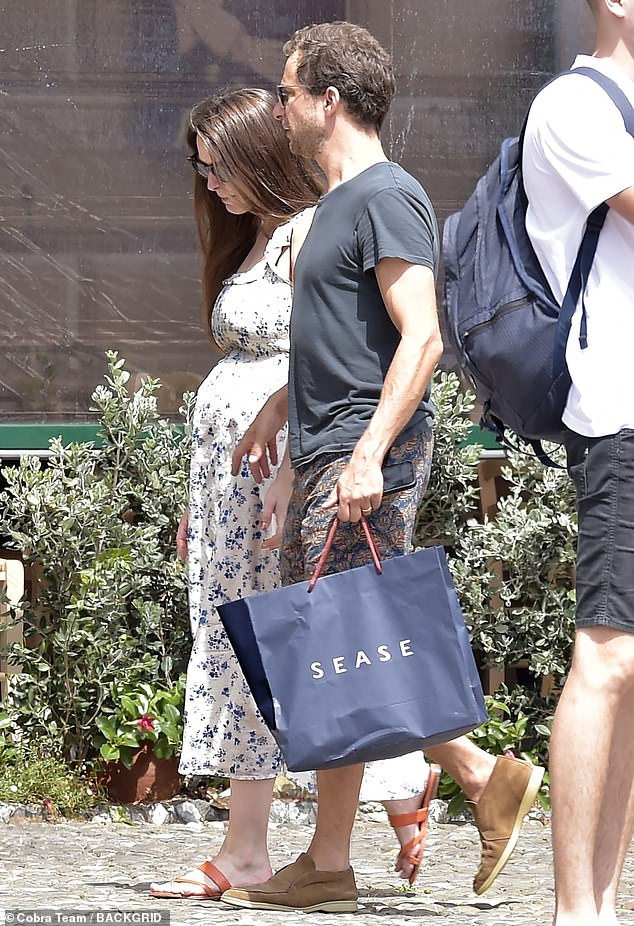 Shopping: The dress silhouette has been a firm favorite for Bee throughout her vacation, with the TV producer stepping out in a similar design just a few days ago 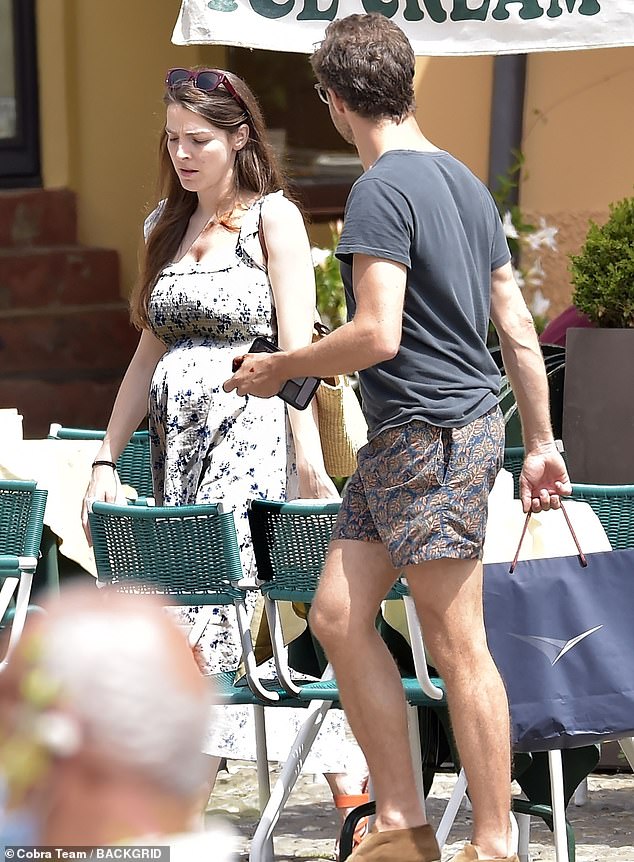 Au natural: Bee went makeup-free and left her long brunette locks in a straight style around her shoulders 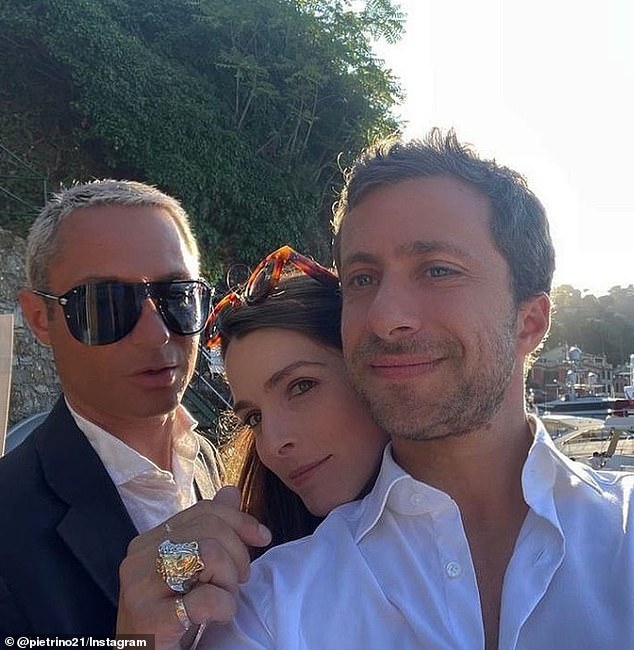 Basking in the sunshine! A friend also shared a photo of the couple — but just showed Bee’s face

The couple also hosted their second wedding celebration in the town back in 2018, having already tied the knot for the first time at 71-year-old Anna’s beach house on Long Island.

For both ceremonies, Bee donned a white dress, although she chose a different design for each wedding location, wowing in a classic silhouette to say her first ‘I do’ but opting for a more summer-friendly Dolce & Gabbana alternative for her second time tying the knot. 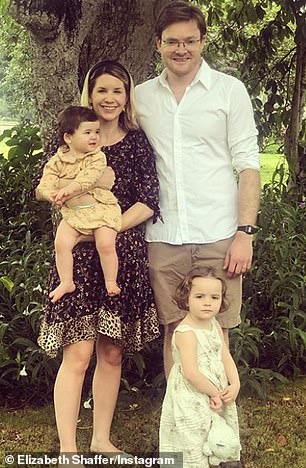 Comfort: During the pandemic, Anna wrote a piece in Vogue in which she opened up about how much comfort she had found in her family and grandchildren (seen with their parents Charlie and Lizzy Shaffer)

Details of both weddings were kept very much under wraps — and Bee declined to publicize her nuptials in the pages of her mother’s magazine, as so many other high-society brides have chosen to do in the past.

It is understood that the couple implemented a strict no-social media rule at their weddings, echoing the same regulations that Anna insists upon at the Met Gala — although those restrictions have become increasingly lax over the years.

Francesco and Bee have always tried to keep their personal lives very much under the radar, sharing d just a few social media snaps .

Bee, who is a TV producer and previously worked on Late Night with Seth Meyers, is said to have known Francesco, who was born in Italy and grew up splitting his time between Milan and Portofino, since they were both children.

The couple’s baby will be Anna’s third grandchild. The Vogue editor-in-chief’s doctor son Charlie, 36, and his wife Lizzy have two children together, four-year-old Caroline and two-year-old Ella.

Last month, Bee came together with her family to celebrate the christening of Charlie and Lizzy’s younger daughter, which took place at Anna’s Long Island home. 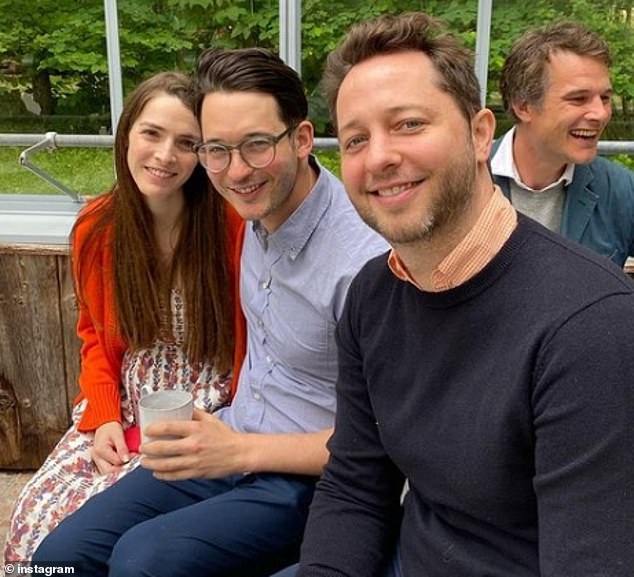 Celebration: Last month, Bee revealed just a hint of a bump while hosting a christening ceremony for her brother Charlie’s younger daughter Ella 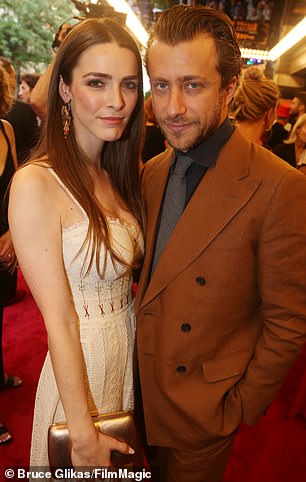 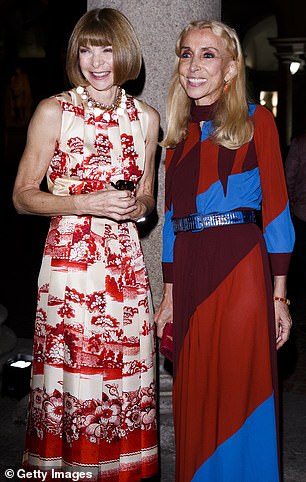 Long-term: Bee and Francesco were first linked in 2016. However, they are said to have known each other since childhood; Anna was close friends with Francesco’s late mother Franca (right)

One guest shared an Instagram snap of Bee with close friends Derek Blasberg and Nick Brown, in which she is seen showing off just a hint of a bump in a printed maxi dress.

In April of last year, Anna opened up about how much comfort she had found in her grandchildren during the early months of the pandemic, writing in a piece for Vogue that celebrating Caroline’s third birthday over Zoom had been one of the highlights of her time in quarantine.

‘What else am I grateful for? My granddaughter, who celebrated her third birthday through a virtual party the other day,’ she wrote, while sharing an adorable photo of the youngster enjoying her birthday cake.

‘A lot of people Zoomed in and it was just a joy seeing how happy that made her.’

Bee and Charlie are Anna’s children from her marriage to first husband David Shaffer, a psychiatrist to whom she was wed for 15 years, from 1984 to 1999.

After her split from David, Anna was in a 20-year relationship with telecoms tycoon Shelby Bryan. However, the couple is said to have gone their separate ways in October last year.