Britons spent 9.3 per cent more on credit cards than they did a year ago in February prompting fears another credit-fuelled financial crisis could be around the corner.

The rate of spend on credit cards is at highest level since February 2006, according to statistics from the Bank of England analysed by This is Money.

The amount outstanding on credit cards now sits at £67.3billion. This is the highest level on record and some £10billion higher than just two and a half years ago.

Concern? Annual spend on credit cards is growing at its fastest pace since early 2006

The surge in such borrowing has fuelled fears that households are living beyond their means and face being buried under debts they cannot pay off.

The amount outstanding on credit cards has ballooned by £10billion in the last three years and the Bank of England has become worried about levels of debt, not just on plastic, but on car finance, payday and personal loans.

Some of the growth in credit is likely to have been fuelled by attractive deals to Britons, including rock-bottom personal loan rates and longest ever balance transfer cards.

For example, Britons can now put off paying their debts by shifting it balance transfer cards with deals as long as anything up to 43 months, while a personal loan war has driven down the cheapest rates to just 3.2 per cent.

Annual spend on credit cards has never fallen, even in the wake of the financial crisis, which began to grip in 2007.

In the year leading up to the financial crisis, annual percentage growth in credit card spend frequently hit more than 20 per cent, as Britons’ addiction to credit cards began to reveal itself. 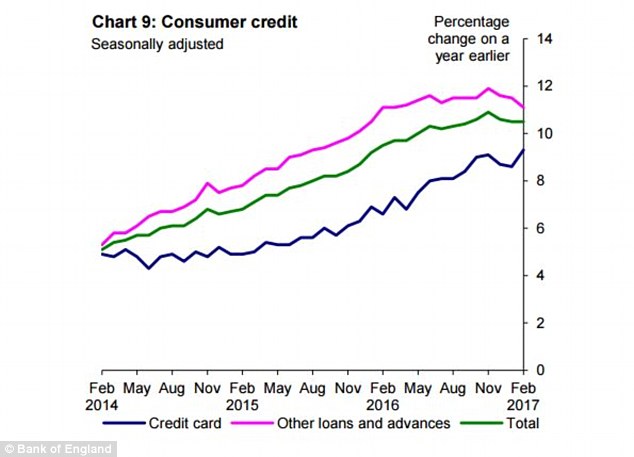 Credit card spending is growing even faster, new figures from the Bank of England reveal

However, this was from a far lower level of outstanding debt on plastic.

In March 1993, when Bank of England started recording the level of debt on credit cards, around £10billion was outstanding.

This figure had doubled by early 1998 and doubled once again by the end of 2001.

Last year, a Financial Conduct Authority report found that revealed 5.1million credit cards – or 8.9 per cent of all cards active in January 2015 – would take more than ten years to pay off their balance.

These fit into a pattern of cards that it later identified where ‘the full balance was almost never repaid’.

It also highlighted how 1.4million borrowers have only made the minimum repayments on their credit cards for three years in a row.

It concludes that credit card firms profit from those who do not pay off debts in time and end up on interest rates that are often around 17 to 20 per cent as standard once special deals end.

‘With the Bank of England Financial Policy Committee highlighting the need for lending standards to be monitored closely, we urgently need action to prevent more households falling into unmanageable debt.

‘The FCA is due to announce the next steps from its credit card market study and it has the power to make a difference by ensuring responsible lending standards, banning unsolicited credit limit increases and compelling lenders to intervene early when people fall into difficulty.’

A further report into credit quality is being conducted by the Prudential Regulation Authority to see if competition for business has resulted in poorer credit quality.

The PRA wants to establish whether the boom in consumer credit is harking back to the ‘bad old days’ when lenders shot themselves in the foot by making it too easy to obtain credit.