Another interstellar object? Astronomers confirm comet comes from outside our own solar system

Is our solar system being visited by another interstellar object? Comet spotted by amateur astronomer may come from elsewhere in space

An amateur astronomer says our solar system may have another visitor from deep space.

According to an announcement from the Minor Planet Center, an object spotted at the end of August by amateur astronomer, Gennady Borisov, in Crimea, is likely the second known interstellar object to make a pit stop in our corner of the galaxy.

Astronomers say the object, preliminarily dubbed C/2019 Q4, appears to be a comet given what they have identified as a tail streaking behind the interstellar visitor while it moves through space.

On Thursday, the center released an official ‘circular’ — a document detailing information on the object’s orbit — which highlighted the apparent comet’s eccentric pattern.

‘Based on the available observations, the orbit solution for this object has converged to the hyperbolic elements shown below, which would indicate an interstellar origin.’ reads document.

While that hyperbolic pattern — which differs from the elliptical shape of objects in our solar system — shows that the object will likely leave our solar system for good, it also portends a longer stay and much more in-depth look than previous interstellar travelers.

Estimates on C/2019 Q4 project that the object could remain within our solar system for between six months to a full year, meaning astronomers may be able to get a particularly good look at its features, on its brightness.

On Thursday, the center released an official ‘circular’ — a document detailing information on the object’s orbit — which highlighted the apparent comet’s eccentric pattern. The faint object is circled above

‘We don’t know how bright it’s going to be. That’s always an issue with comets, so you’ve got that unpredictability, combined with the fact that it is interstellar. And this is the first interstellar comet we’ve seen,’ astronomy-software developer Bill Gray, told Forbes.

Previously, astronomers identified an asteroid-like rock known as Oumuamua, the first known interstellar object to pass through our solar system.

The mysterious cigar-shaped projectile, formally named object 1I/2017 U1, resembles both a comet and an asteroid, however, it doesn’t conform to many of the other defining features usually associated with these objects, including its direction of spin and lack of a tail. 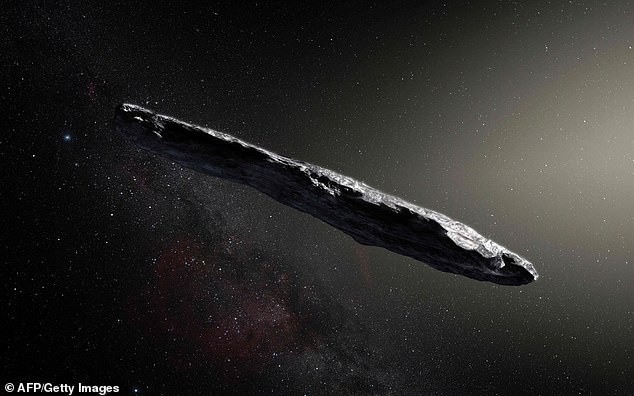 Previously, astronomers identified an asteroid-like rock known as Oumuamua, the first known interstellar object to pass through our solar system. An artist’s impression of Oumuamua is pictured

Conversely, when astronomers spotted Oumuamua, they had just three weeks to observe it before it left our solar system.

Researchers had just weeks to collect as much data as possible before the strange visitor traveled beyond the reach of Earth’s telescopes.

The object is now out of sight but could take up to 20,000 years before it leaves our solar system onto its next destination.

Interstellar objects like the ones recently discovered are particularly exciting for astronomers since they offer a rare, glimpse of what other parts of the galaxy may look like.

Astronomers will now be able to compare their findings on Oumuamua with the most recent specimen.

WHAT IS ‘OUMUAMUA AND WHAT DO WE KNOW ABOUT IT?