Another star-studded day in the Royal Box at Wimbledon

It is one of the hottest tickets in sports, so it is of no surprise the Royal Box was packed with a dazzling array of stars as the Wimbledon men’s semi finals got underway this afternoon.

Along the front row it was largely royal invitees, with regular fixtures Prince and Princess Michael of Kent taking their seats alongside the Duchess of Gloucester and Princess Margaret’s son Lord Snowdon.

The great and the good from world tennis were also well represented, with chiefs of the Australian, French and US national organisations all in attendance.

Elsewhere there was a smattering of leading lights from the world of business, with Sir Joseph Hotung and Charles Delevingne  among the most notable.

Despite the intrigue and excitement that must have passed between the high profile spectators, all eyes were most definitely on Centre Court when Novak Djokovic claimed victory against Spain’s Roberto Bautista Agut.

Later they will watch Roger Federer take on Rafa Nadal in a clash of the titans.

Property developer Charles Delevingne, 70, will be best known to many as the father of daughters Chloe, Poppy and Cara. From a well-connected clan, Mr Delevingne is today a guest of Lord Snowdon.

Son of Princess Margaret and photographer Antony Armstrong-Jones, 1st Earl of Snowdon, Lord Snowdon is a furniture designer and former chairman of Christie’s. He is married to Serena but attended without her today.

The wife of Wimbledon chairman Phillip Brook, Gill was on hand to chat to Lord Snowdon and Sir Joseph Hotung. By virtue of her husband’s position, Mrs Brook is a regular fixture on the front row of the Royal Box. 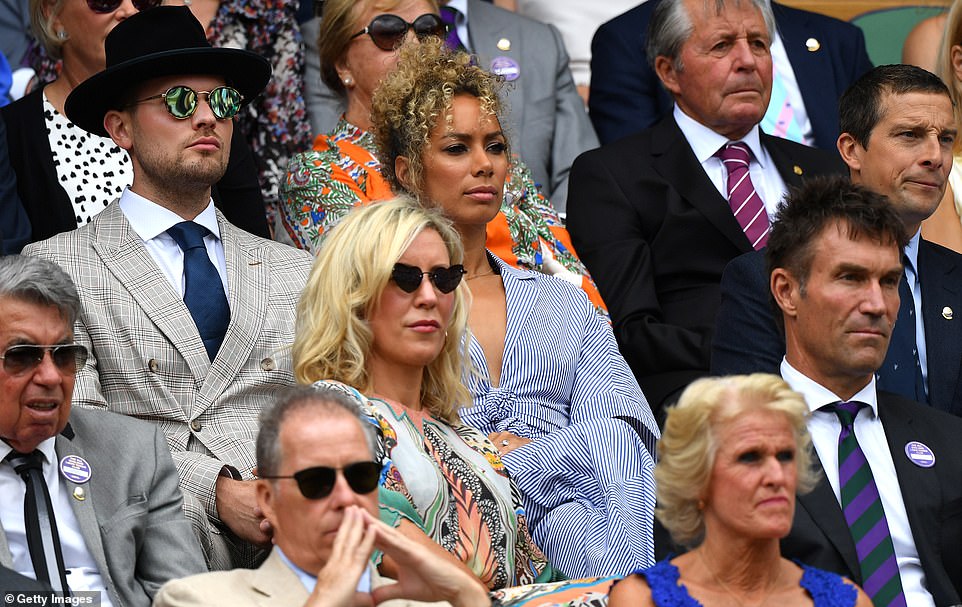 Concentration: Lord Snowdon (front centre) looked focused as he watched the match alongside Gill Brook (front right), they were seated in front of Pat Cash (middle right) and girlfriend Catherine Wilson (middle left). On the row behind them was (from left) Dennis Jauch, Leona Lewis and adventurer Bear Grylls. They watched Novak Djokovic in the first men’s semi final

Sir Joseph Hotung, 89, is a renowned businessman and philanthropist who has held a string of distinguished posts in both London and Hong Kong, where his family is from. He is also known as a collector of Chinese art.

Birgitte, Duchess of Gloucester, 73, is the wife of the Duke of Gloucester, a first cousin of the Queen. The Danish-born royal is a full-time working member of the Royal Family and travels extensively in her role.

Elected chairman of Wimbledon’s All England Club in 2011, Philip Brook is a former captain of Cambridge University’s tennis team.

Prince Michael of Kent, 77, is a first cousin of the Queen. He receives no public money, but does undertake a range of public duties, including representing The Queen at certain engagements. 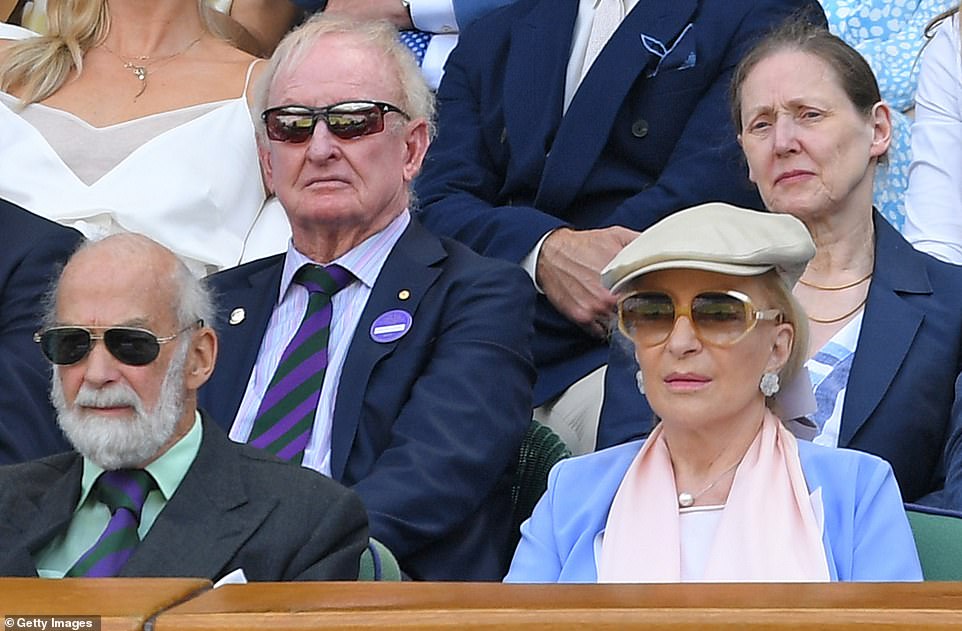 The 74-year-old royal has been married to Prince Michael since 1978. Sometimes known as ‘Princess Pushy’ for her imperious ways, Princess Michael recently saw her daughter Lady Gabriella Windsor married to Thomas Kingston.

Rebecca Howard is the wife of Simon Howard, whose family have called 17th-century Castle Howard in North Yorkshire home for 10 generations. She is attending as a guest of Princess Michael of Kent.

Aftab Jafferjee QC is a high profile criminal prosecutor who was listed by The Times as being one of the country’s top ten criminal barristers at/under the age of fifty. 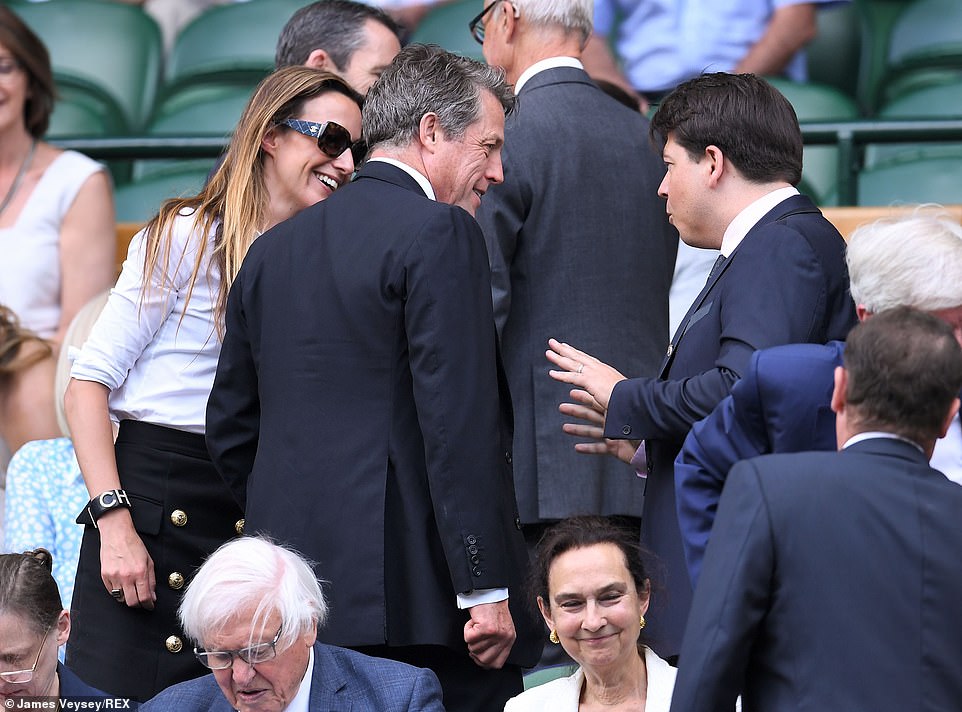 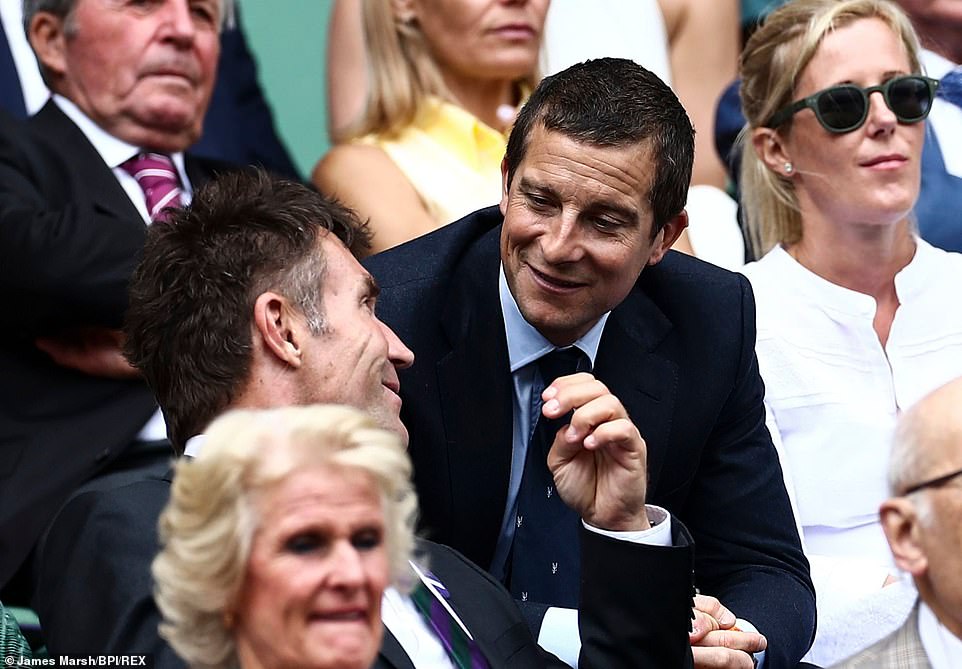 Former tennis pro and world no.1 Patrick Galbraith was last year elected as chairman and president of the United States Tennis Association (USTA). He took in the action at Wimbledon alongside wife Tammy.

Retired Australian professional tennis player Pat Cash, 54, cut a stylish figure in the Royal Box today. He was seen grabbing a selfie with Bear Grylls (on the row behind) and chatting to his partner Catherine Wilson.

Truly a national treasure, naturalist Sir David Attenborough, 93, looked sprightly as he took his seat alongside his daughter Susan. His new series, Seven Worlds, One Planet, is expected to air on the BBC this year. 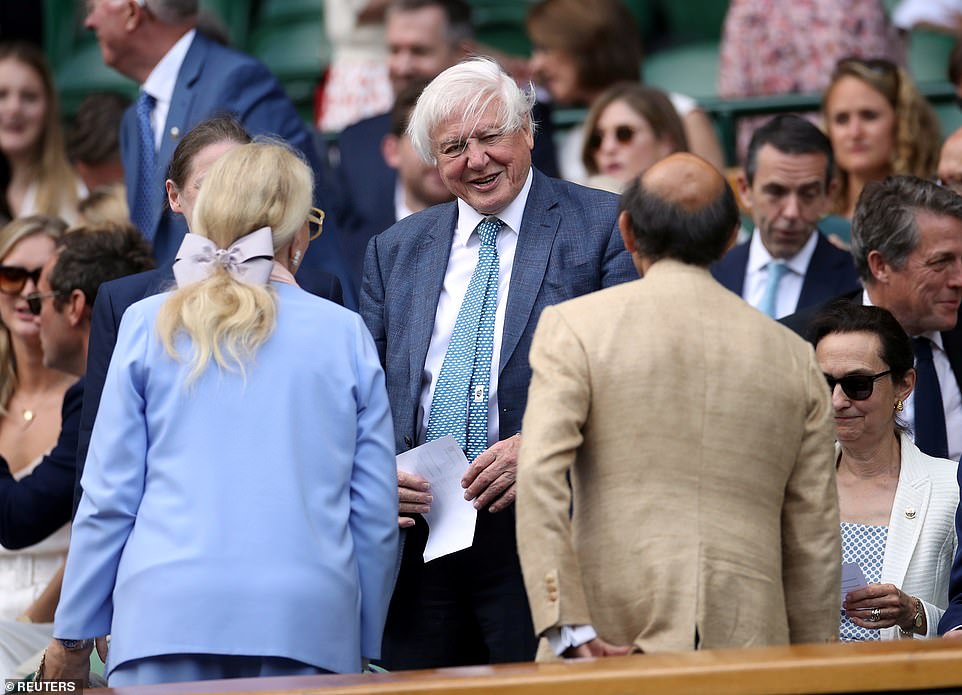 Holding court: David Attenborough spoke to Princess Michael of Kent and Aftab Jafferjee QC, right, during a break from play

David Haggerty is an American tennis administrator who was elected President of the International Tennis Federation in September 2015.

French Tennis Federation president Bernard Giudicelli made headlines last year when he said in a magazine interview that the black catsuit worn by Serena Williams ‘will no longer be accepted’ at the French Open.

Businesswoman Jayne Hrdlicka has enjoyed a distinguished career in both the US and Australia. She is also chairman and president of Tennis Australia. 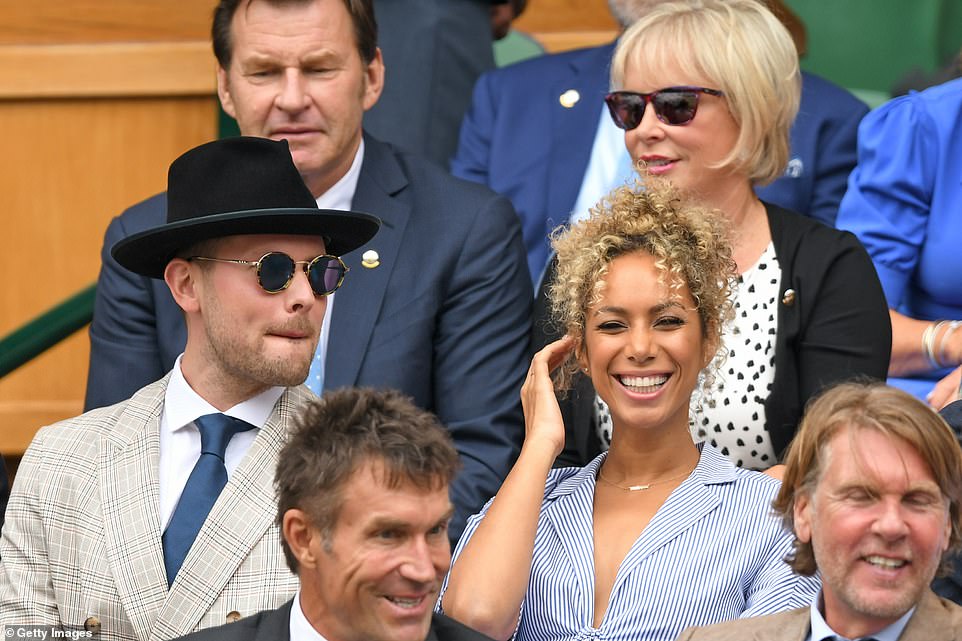 The outing by pop star Leona Lewis and fiancé Dennis Jauch marks a rare public appearance for the couple, who prefer to keep a low profile. The 34-year-old singer looked chic in a stylish blue and white stripe jumpsuit.

TV survival expert Bear Grylls and wife Shaura looked dapper in their summer finery as they took their seats alongside celebrities in the Royal Box. Bear, 45, and his wife of almost 20 years share three children. 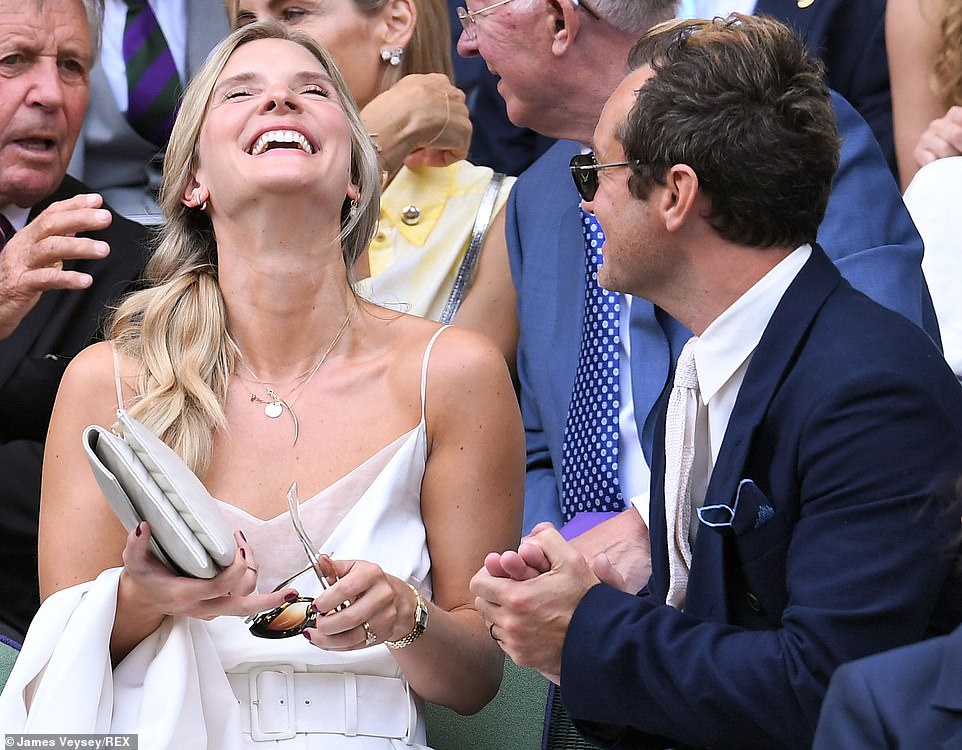 Newlywedded bliss: Dr Phillipa Coan and Jude Law, who married in May, giggled as they took in the action at Wimbledon

Actor Jude Law and psychologist Dr Phillipa Coan tied the knot in May and looked every inch the loved-up newlyweds as they chatted and joked in the Royal Box. They recently returned from honeymoon in Sardinia.

Continuing the star-studded line up were Hugh Grant and his wife Anna Eberstein, who cut a chic figure in a monochrome ensemble. The couple married last year and have a six-year-old son, John Mungo Grant.

Comedian Michael McIntyre and his wife of 16 years Kitty made a rare joint public appearance to watch the men’s semi finals today. The low key couple, who have sons Lucas, 14, and Oscar, 11, stay largely out of the limelight. 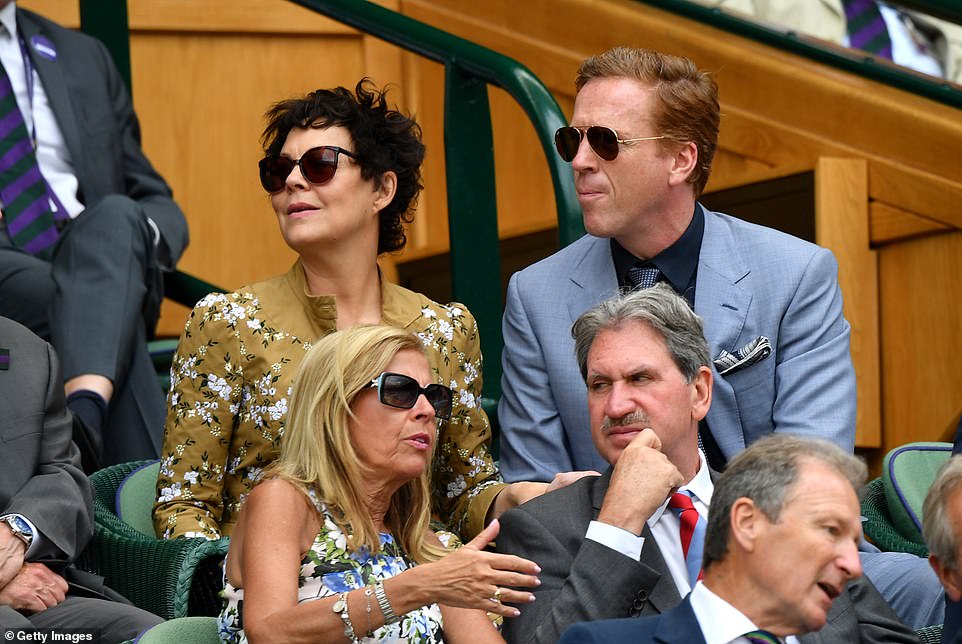 Low key: Acting power couple Helen McCrory, 50, and Damien Lewis, 48, were seated on the far side of the Royal Box

Acting power couple Helen McCrory, 50, and Damien Lewis, 48, were typically understated at the tournament today. Lewis appears in Quentin Tarantino’s hotly anticipated summer film Once Upon A Time in Hollywood.

Another low key couple who stepped into the spotlight for Wimbledon was actor Eric Bana, 50, and his wife Rebecca, 48. The Australian couple were seated at the edge of the Royal Box next to McCrory and Lewis.

Golfer Sir Nick, 61, was joined by his girlfriend Lindsay De Marco for the event today.

Manchester United legend Sir Alex Ferguson, 77, proved just how close he is to his family by stepping out with daughter-in-law Fiona, who is married to his son eldest son Mark. The couple tied the knot in 2000. 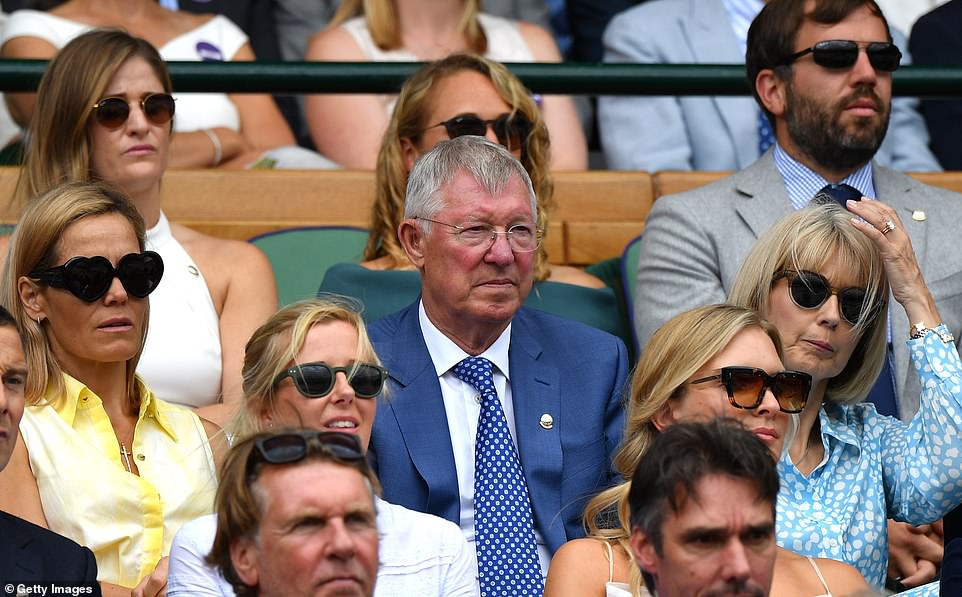