Antarctic penguin populations could explode due to global warming

Antarctic penguins could experience a ‘population boom’ due to global warming as melting sea ice means they have to spend less time foraging for food.

Japanese scientists describe the Adélie species of penguin, which is native to Antarctica, as a ‘rare global warming winner’ thanks to melting ice.

In low-ice conditions, penguins are able travel more by swimming than by walking, which increases their access to foods such as fish and krill.

For Adélies, swimming is four times faster than walking, meaning faster access to food and, in turn, healthier offspring and longer lifespans.

The research team electronically tagged nearly 200 penguins in the Antarctica with GPS devices, video cameras and other equipment to monitor the effects of less ice.

The penguins were shown to be able to conduct shorter dives while catching more krill, due to not having to locate cracks in the ice for breathing while submerged.

Large group of Adelie penguins on an ice floe in Antarctica. Adélie penguins on the continent covered more ground in less time by swimming instead of walking as they searched for prey, which meant healthier and more robust populations

‘It turns out that these penguins are happier with less sea-ice,’ said lead researcher Yuuki Watanabe at the National Institute of Polar Research in Tachikawa, Japan.

‘This may seem counter-intuitive, but the underlying mechanism is actually quite simple.

‘They may be sleek in the water but are pretty slow waddlers overland.’

Antarctica, the Earth’s southernmost continent, has actually experienced a steady increase over the course of decades in the extent of its sea ice – frozen seawater.

This contrasts with its polar twin, the Arctic, which has suffered through a marked decrease.

However, Antarctica is set to see a decline in its sea ice, with consequences for its maritime habitat and the organisms that live there – but these aren’t all negative, the scientists say. 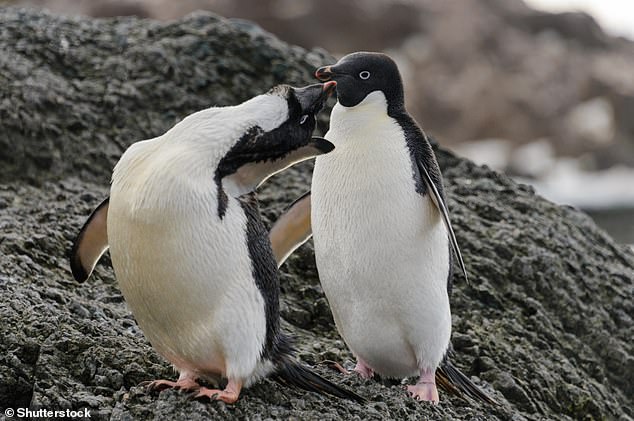 Two Adelie penguins standing on beach in Antarctica. Biologists have known for some time that the species tend to see population increases during years of sparse sea ice and suffer massive breeding failures during those years with the greatest growth of sea ice. But until now, researchers didn’t know why

Adélies, the most common species of penguin in Antarctica, tend to see population increases during years of sparse sea ice and suffer massive breeding failures in years with the greatest growth of sea ice, but researchers didn’t really know why until now.

Previous studies that made mention of the relationship between population growth and sea-ice have only ever established a correlation, not a cause.

The team electronically tagged 175 penguins with GPS devices, video cameras and accelerometers – which are used to measure acceleration.

This equipment allowed them to track penguins on their trips, categorise walking, swimming and resting behaviour and estimate the number of prey captured during dives.

Luckily, the 2016 to 2017 breeding season proved unusual and provided a helpful comparison with the other four monitoring periods.

During that winter, a large quantity of sea ice in the bay broke up and drifted away with currents, providing a natural experiment by which the scientists could observe penguins foraging in the absence of sea ice. 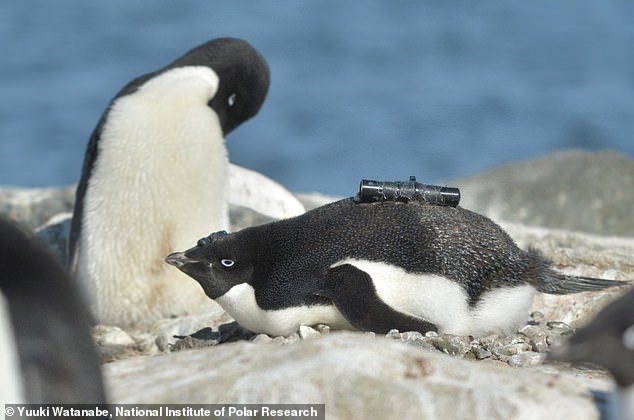 In seasons with heavy sea ice, the penguins had to walk, or sometime toboggan, down the ice for long distances to find cracks and access the waters to hunt.

But when there is less sea ice, penguins could dive anywhere they want and could often just enter the water right by their nests.

Not only is this fortunate arrangement more energy- and time-efficient for the penguins, but it expands their foraging range.

Most importantly, this likely reduces competition with other penguins for prey and allows them to catch more krill – small crustaceans and the penguin’s main prey.

In the 2016 to 2017 season, penguins expended an average of 15 per cent to 33 per cent less energy per trip, compared with the other ice-covered seasons, the researchers said.

That saved energy was put into growth and reproduction and ultimately provided a big boost to populations.

Adélie penguins may experience a population boom in the years to come, due to predictions of Antarctic sea ice rapidly diminishing as the century progresses.

However, according to previous studies, Adélie populations that reside in warmer, sea-bordering regions – about 30 per cent of the species – do not fare well when sea ice diminishes.

Penguins on the thin Antarctic peninsula that sticks out from the continent or live on its islands may not reap the benefits described by the Japanese researchers.

The team say future research will test why this might be the case.

The study has been published in Science Advances.

WHAT ARE ADÉLIE PENGUINS?

Adélie penguins are a common bird found all over Antarctica.

There are thought to be over 250 colonies of the birds around Antarctica which vary in size and can reach group sizes of several hundred thousand.

They can swim at 5 miles per hour (8.0 km/h) and are often predated on by leopard seals and, occasionally, killer whales.

Their diet consists mainly of krill and silverfish.

Commercial fishing for krill in Western Antarctica, combined with climate change, has seen a steady decline in the numbers of the birds.

A recent study found a previously undiscovered ‘supercolony’ of Adélie on an archipelago on the Northern tip of Antarctica.

Danger Islands plays home to 1.5 million of these birds, more than the rest of the Antarctic region combined.