Anthony Albanese has defended his minister who Jacinta Price blasted for flying on a private jet to remote Aboriginal communities while ‘dripping with Gucci’.

During scathing criticism of the Indigenous Voice to Parliament on Monday, Senator Price singled out Indigenous Australians Minister Linda Burney.

‘She might be able to take a private jet out into a remote community, dripping with Gucci, and tell people in the dirt what’s good for them – but they are in the dark, and they have been in the dark,’ she said.

The prime minister backed Ms Burney up during Labor’s weekly Tuesday party room meeting after several MPs spoke in solidarity with her.

‘When people go that personal, it shows they do not have an argument of substance,’ he told the room.

One MP called Senator Price’s remarks a ‘repulsive and absurd attack’ and asked the meeting to show her support.

Ms Burney’s office said the minister did not own any Gucci products.

Nationals leader David Littleproud, who was standing next to Senator Price when she attacked Ms Burney, admitted on Tuesday that she want too far.

‘I don’t think that’s helpful. But Jacinta is very passionate about this because she has lived experience,’ he told the ABC.

Ms Burney later made an emotional speech defending the Indigenous Voice to Parliament during Question Time.

The minister listed ways in which life for indigenous Australians needed to improve, and labelled the Voice the country’s ‘best chance we have, and perhaps will ever have’ at doing so.

‘This isn’t about more bureaucracy. This is about making sure voices in remote and regional communities are heard,’ she said.

‘The Uluru Statement from the Heart is the result of 12 regional dialogues after all, over 1,200 attendees from right across this country.

‘This isn’t about dividing people. It is about uniting Australians. Giving First Nations People a say in the matters that affect us. Not being told what is best by bureaucrats.’

Ms Burney explained how she grew up in Whitton, a small town in the NSW Riverina, where she was raised by her great-uncle Billy and great-aunt Nina.

‘Billy and Nina taught me the value of respect, that being kind to others doesn’t cost you anything, and that you learn more from listening than by talking.

‘That someone with my history can stand in this place is the most unlikely thing.

‘But not everyone is so lucky. Not everyone can have their voice heard. And that is why we need a Voice.’

Ms Burney received a rousing applause and cheer from the Labor benches after finishing her speech. 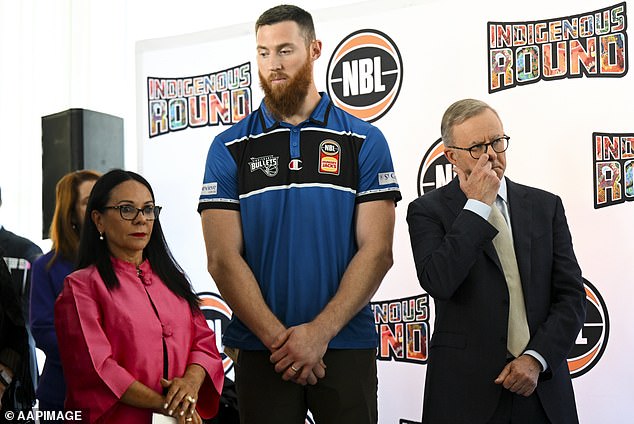 Senator Price launched her viscous attack as Mr Littleproud declared the National Party would not support the Indigenous Voice.

Mr Littleproud said his party spoke with indigenous leaders and claimed the Voice would not help close the gap between First Nations and white Australians.

‘We believe empowering local indigenous communities, giving them the power at a local level, not creating another layer of bureaucracy here in Canberra,’ he said.

‘This is not a voice for regional, rural and remote Australians. This is one for those who live in Redfern, they’ll be OK.

‘But just think about those Indigenous Australians that live in Central Australia. They’re not going to have a voice out of this, they’ll have another layer of bureaucracy that won’t shift the dial of the legacy we get to leave.’

Mr Littleproud said he instead wanted to give rural indigenous communities the opportunities those in the cities enjoyed every day. 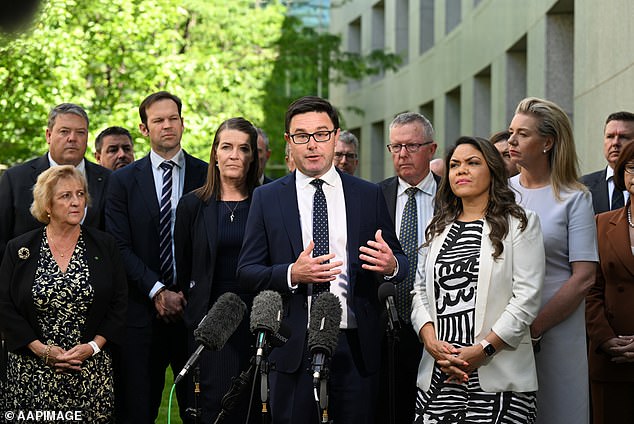 Senator Price said Australia had to ‘stop being divided on the lines of race’ and she and the National Party wouldn’t support a ‘failed model’.

‘It’s not racist to disagree with a proposal… that lacks detail and divides us on the lines of race,’ she said.

‘Yes, there is goodwill, there is immense goodwill from Indigenous Australians in this country… what we need now is practical measures, not an idea that lacks complete and utter detail and based on emotional blackmail.’

The Nationals will not, as a party, actively oppose the Voice and instead leave it up to individual MPs to represent their constituents.

‘Jacinta [Price] will take a national position and profile in articulating a case. I will be making sure that my community, as I’ve rung many and tragically, some of them don’t even know what the Voice is,’ Mr Littleproud said.

‘We are this far down the path and traditional owners in Western Queensland some of them have no idea – it means nothing to them, it won’t help them.’

Senator Price said she hoped Australians would vote against a referendum to establish the Voice if one was called.

‘This Voice model is about empowering the elites to demand a transfer of power, and nothing more than that,’ she said.

‘This Voice model is not recognition, let’s not get the two confused here, this is an entire bureaucratic country we don’t have details on.’ 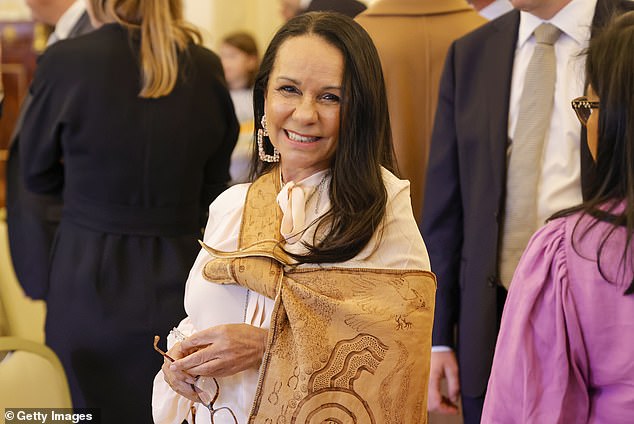 Senator Price said she and other Nationals MPs spoke to indigenous communities about the Voice and claimed they ‘didn’t want more division’ in Australia.

‘We are part of a liberal democratic Australia. And one of our fundamental principles is that we are all regarded as equal under the law. Despite race, despite gender despite anything else,’ she said.

‘Why should I as an indigenous Australian be governed under a separate entity than the rest of Australia because of my race?’

The Indigenous Voice as it is proposed is a strictly advisory body giving insight and advocacy to all levels of government, and does not do any ‘governing’.

Senator Price said she spoke to indigenous Australians in her electorate of the Northern Territory, many of whom did not speak English as their first language, and found many were unaware of the Voice.

‘[They] are living their day to day worrying about how they’re not going to encounter violence in their lives,’ she said.

‘Worrying about how they’re going to manage their affairs without humbug from their relatives who are dealing with alcohol and substance abuse, worrying about ensuring that their kids are actually going to get to school because now their remote communities are overcome with alcohol fueled violence.

‘These are the issues that people are concerned with now they’re not sitting around waiting for a proposal to come up with details as to how it’s going to improve their lives.

‘We are here to serve Australian citizens of all backgrounds and it is not right to divide us along the lines of race especially within our Australian founding document.’

Senator Price is a longstanding opponent of the Indigenous Voice and frequently speaks out against it, including in her maiden speech to parliament,

She frequently describes it as being a bureaucracy that would divide Australians by race, and believes it would do nothing to solve practical problems like alcoholism and sexual abuse in indigenous communities.

Greens senator Lidia Thorpe, who vehemently disagrees with Senator Price on almost all other issues, also opposes the Voice.

Her opposition is rooted in her constant agitation for a treaty between indigenous people and the Australian Government to be negotiated first.

She is also concerned the Voice would end up being a ‘waste of money’ that would not have a practical benefit on indigenous lives. 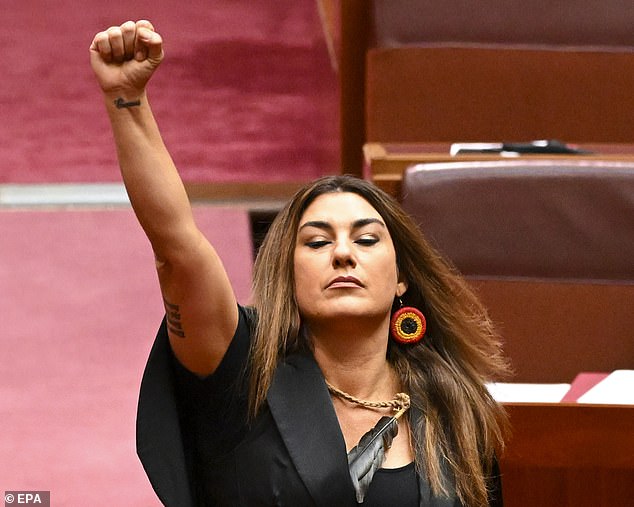 Greens senator Lidia Thorpe, who vehemently disagrees with Senator Price on almost all other issues, also opposes the Voice

What would be added to the constitution?

1. There shall be a body, to be called the Aboriginal and Torres Strait Islander Voice.

3. The Parliament shall, subject to this constitution, have power to make laws with respect to the composition, functions, powers and procedures of the Aboriginal and Torres Strait Islander Voice.

The two senators found common ground in slamming Anthony Albanese for his meeting with NBA legend Shaquille O’Neal in August.

The former NBA star was supposed to show support for the Voice – but instead mumbled a few words about God and loving Australia.

Senators Thorpe and Price were united in panning the event as a divisive stunt.

Mr Littleproud said the Liberal Party would make its own decision about whether to support the Voice, and the issue would be discussed at Tuesday party room meeting.

Opposition Leader Peter Dutton has not expressed a firm view either way, but has spoken critically of the Voice on several occasions.

He in September declared the Coalition would not decide whether to support it until key questions were answered.

Mr Dutton told a joint party room meeting that the opposition wanted to be ‘generous’ in considering the issue, but was frustrated by lack of detail.

‘Labor seems to be making it up as they’re going along, they can’t answer even the most basic questions,’ he told MPs.

‘We still don’t know what the body is going to look like – how it will be made up, and which communities will be represented and how they will be chosen.’ 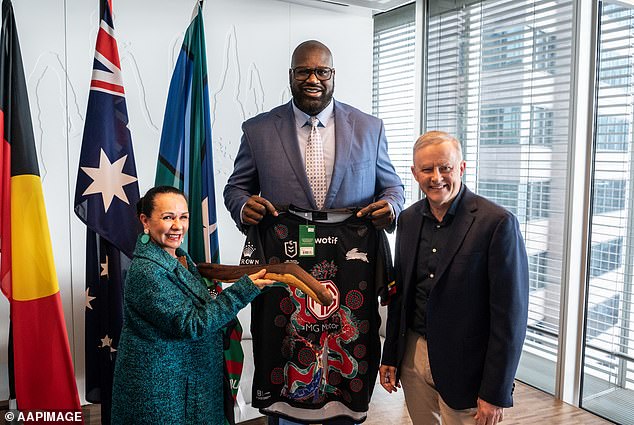 Days later he issued a call to arms to the industry to attack the Voice at a Minerals Council of Australia lunch in Parliament House.

‘We have no idea what it means for the mining sector,’ he said in a fiery speech to an appreciative crowd.

‘We don’t know whether a Voice that doesn’t represent the elders that you negotiate with or that your agreement is with in a particular location, now, they might be usurped and [the Voice will] exercise a veto, right?

‘But this preparedness to sign up to please others I think is a disease within corporate Australia at the moment.’ 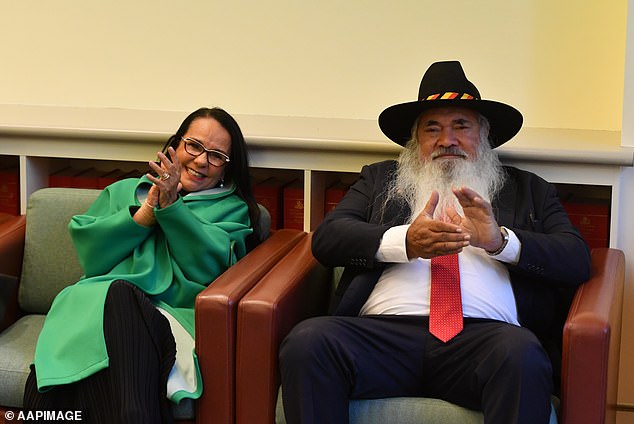 Ms Burney and Labor senator Pat Dodson, both indigenous MPs and strong proponents of the Voice, during a Labor Party Caucus at Parliament House

A poll by the Australia Institute in July found not just strong support for the Voice, but for it to be added to the constitution.

The poll found 65 per cent would vote yes, up from 58 per cent when the same poll was run in June.

Some 14 per cent said they would vote no with the other 21 per cent undecided.

Support was highest among Greens voters, but even 58 per cent of those Coalition aligned would vote yes.

However, there is still a long way to go until a referendum, expected to be held in the 2023-24 financial year, is actually held.

Mr Albanese was hoping both Labor and the Coalition would unite behind the proposal, but will now have to forge ahead without the Nationals.

The details of how the Voice will work and what practical influence it will have are nowhere near finalised but the PM said they would be before the referendum.