Anthony Albanese has shown off his adorable isolation buddy as he campaigns from home after contracting Covid.

The PM hopeful shared a snap of himself, campaign speech drafts, and his dog Toto as he remains in self isolation – at least for another 5 days – after testing positive to Covid on Thursday.

‘Working on my campaign launch speech with my iso companion, Toto. #isoday2’ the opposition leader tweeted from the kitchen table of his home.

Toto was clad in a bandanna with the words ‘ALBO’ written across it.

Albo in iso: The opposition leader took the chance to show off his kitchen bench workstation and canine colleague as he endured his second day of home isolation (pictured) 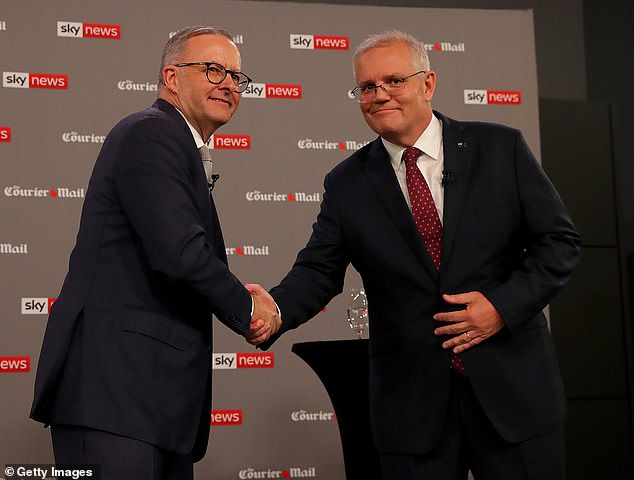 Mr Albanese returned the positive result on Thursday evening, just a day after his first pre-election debate, despite Labor’s extreme efforts to prevent him catching the virus on the campaign trail.

He has been isolating in his Marrickville home since being struck down with the virus.

On Friday Western Sydney MP Jason Clare fielded media questions for the Labor party while Mr Albanese was isolating, leading to calls to see more of the ‘articulate’ MP.

Mr Albanese’s positive result has thrown his election campaign plans into disarray, but the he is expected to keep Labor in voters’ minds by doing radio, TV and online interviews from his home.

‘While at home I will continue my responsibilities as alternative Prime Minister and will be fighting for a better future for Australians,’ Mr Albanese said just after revealing his positive result.

‘I am grateful to know that I will have access to the world’s best health care if I need it, because of Medicare.

‘I am feeling fine so far – and thank everyone for their well wishes.’ 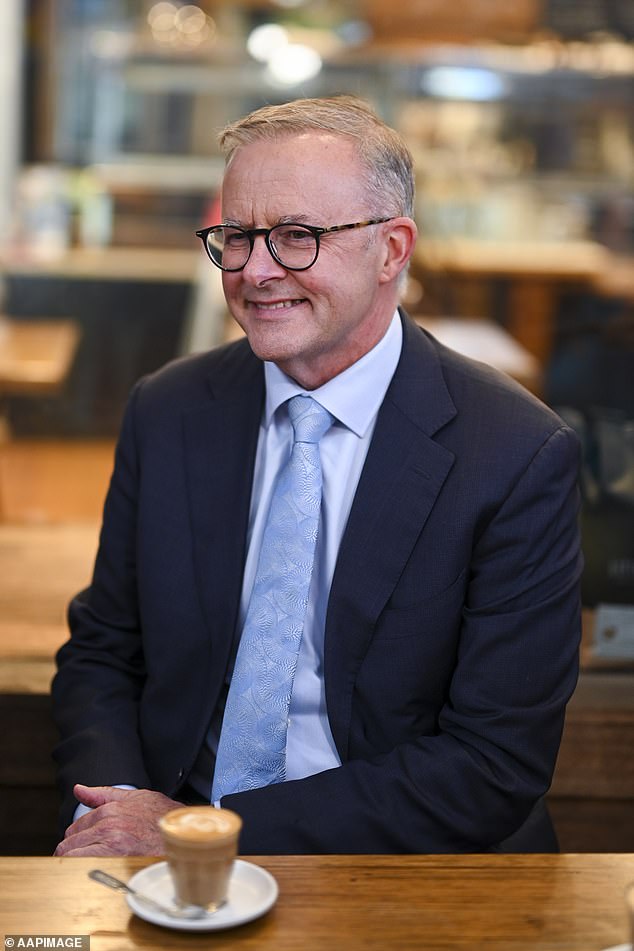 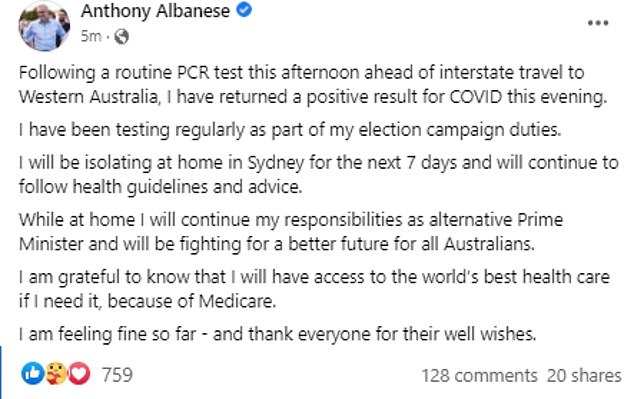 Mr Albanese had been at Bluesfest in Byron Bay on Sunday, attended by more than 100,000 people, with northern NSW seeing a spike in Covid infections this week.

Two monthly highs of 631 cases on Wednesday and 719 infections on Thursday have been recorded – around double the daily cases average over the past two weeks.

Some areas in northern NSW are also lagging in vaccination rates.

Mr Albanese said he’d been testing regularly during his time on the election campaign, and had taken a PCR test ahead of a scheduled trip to Western Australia.

The man vying for Australia’s top job has been out and about campaigning in the community in recent days, meeting voters and shaking hands with the election just weeks away.

His party’s formal launch is set for May 1 in Perth.

On Wednesday night he went head-to-head with Mr Morrison for Sky News and The Courier Mail’s People’s Forum.

The PM tested positive to the virus himself in early March.

Mr Morrison tweeted on Thursday evening saying he wished Mr Albanese all the best in his recovery.

‘Everyone’s experience with Covid is different and as Labor’s campaign continues, I hope he does not experience any serious symptoms,’ the PM said.

Mr Morrison is not considered a close contact and it’s understood he has personally reached out to Mr Albanese.

Labor had put in strong measures to try prevent any spread of Covid after members of the party recently tested positive. 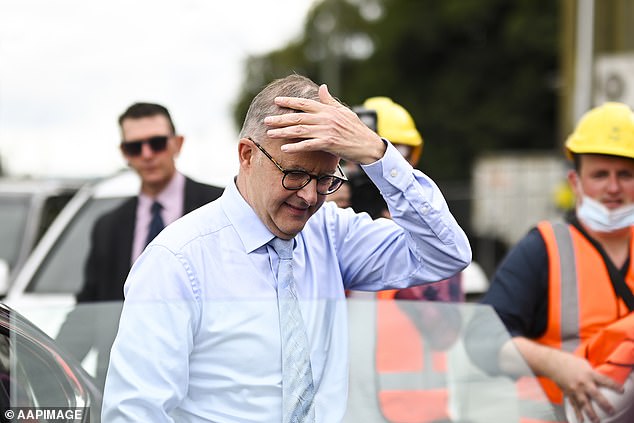 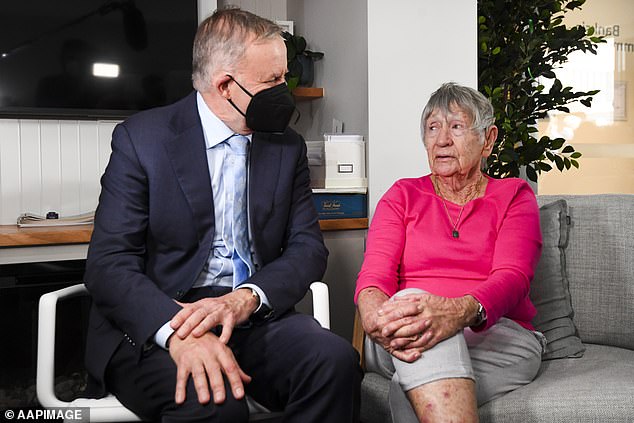 Media joining Mr Albanese on the campaign trail must be triple vaccinated, wear an N95 mask in most settings and take rapid tests every three days.

Thursday’s result is the first time Mr Albanese has tested positive to Covid, with his team reportedly meeting on Thursday night to decide on a contingency plan.

Mr Albanese had been in Brisbane from Monday to Wednesday this week.

He spent Thursday campaigning in NSW’s South Coast for the seat of Gilmore where he visited a distillery and a retirement village.

He also posed for photos with locals at a cafe in Ryde in Sydney’s north. 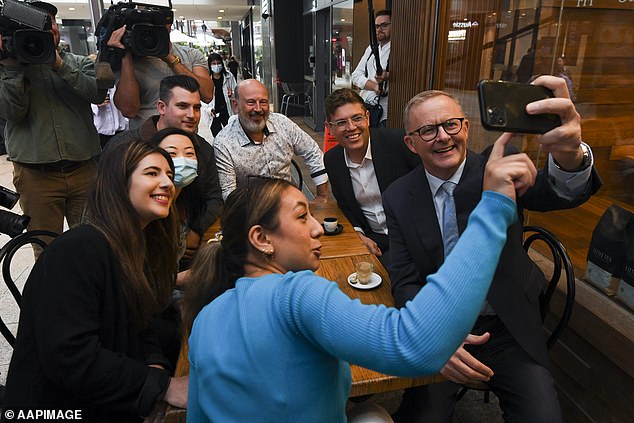 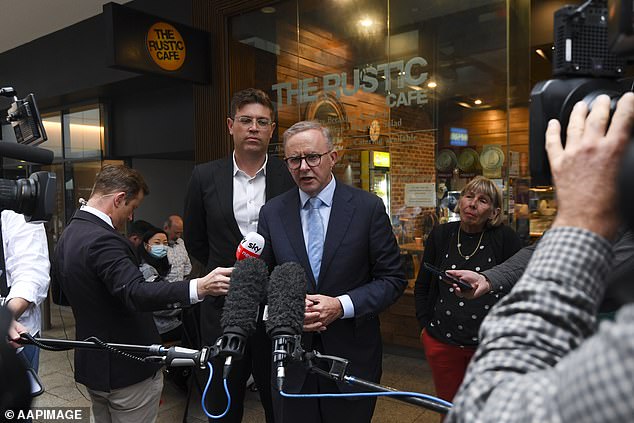 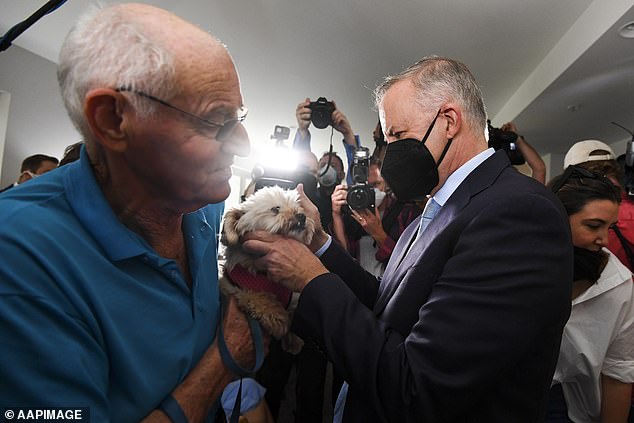