There have been times during the months that have elapsed since his glorious demolition of Wladimir Klitschko last spring when it was easy to think that the boxing life of Anthony Joshua had become less about grit and courage and more about glamour and celebrity.

The sport of boxing and a courageous stand-in challenger, Carlos Takam, reminded us of the brutal reality of what it takes for Joshua to be the heavyweight champion of the world, though. This was supposed to be a cakewalk for Joshua but it turned into a punishing ordeal.

Joshua was in charge throughout the ten rounds it took for him to force an unpopular stoppage of the Frenchman but his nose appeared to be broken by what might be charitably called a clash of heads in the second round and his face was splattered with the blood of his challenger, who had a deep cut under his right eye. 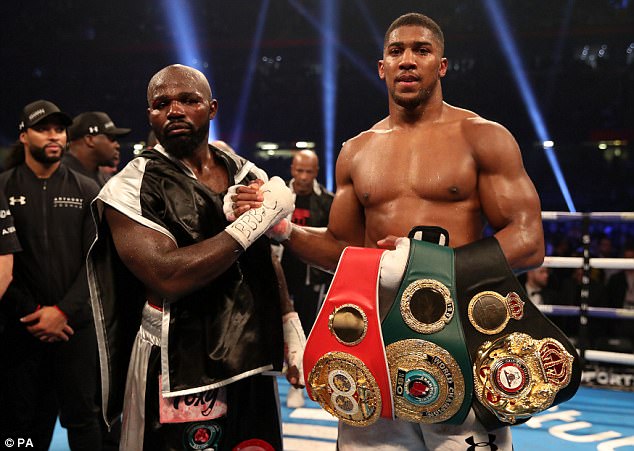 This was not about glamour. This was about application and ferocity. There were times, as Joshua struggled to put Takam away, when the thought flickered across the minds of those watching that the champion’s tiredness might make him vulnerable to a late rally from the 36-year-old champion.

That did not happen but when the referee jumped in between the two men in the tenth round to call the fight to a halt and award Joshua his 20th straight win inside the distance, a crescendo of boos rang around Cardiff’s Principality Stadium, which was packed with 70,000 fans.

They were not boos for Joshua but for the fact that Takam, who had showed such guts, had not been allowed to continue.

The reality, though, was that he was all but defenceless by then and he posed very little danger to Joshua any more. He wanted to carry on but the referee did the right thing in sparing him further punishment.

‘If he had started catching up in the later rounds,’ Joshua said after the fight, ‘it would have been a massive disaster. I just kept my composure. I need to get my nose get back in place and continue to grow the sport of boxing.’

His promoter Eddie Hearn said that Joshua would continue to fight in the UK and there are plans for him to try to unify the titles by fighting WBC champion Deontay Wilder and WBO champion Joseph Parker next year.

Ideally, Joshua would also like to fight former unified champion Tyson Fury but Fury’s future in the sport is still uncertain. He has appeared to announce his retirement at least twice on Twitter and is also waiting for a final ruling from the UK Anti-Doping authority after a hearing into a suspended drugs ban.

He may want to take a little time off after Saturday night. ‘No problem,’ Joshua had said when he found out that his original opponent, Kubrat Pulev, had pulled out with an injury 12 days ago and been replaced by Takam, ‘that’s a fun fight.’ It was anything but. 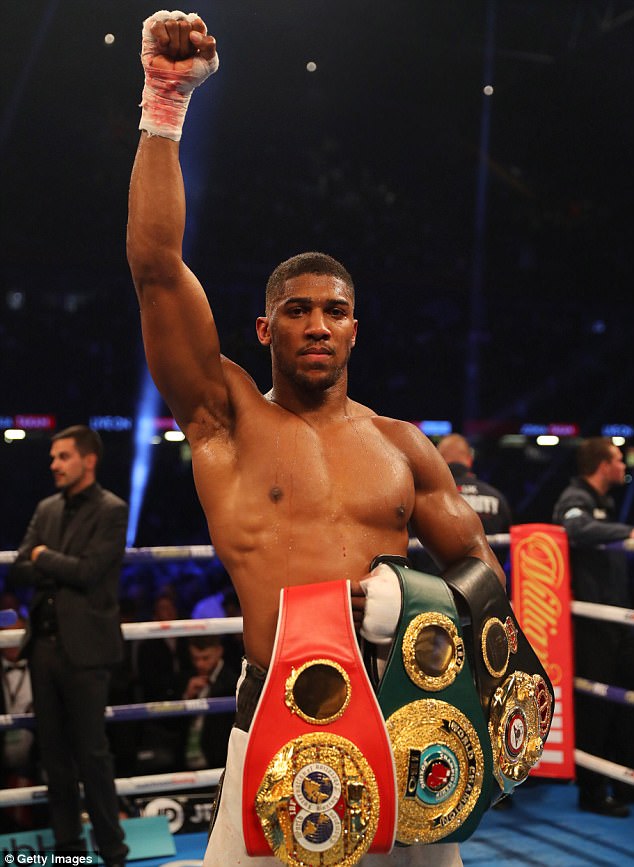 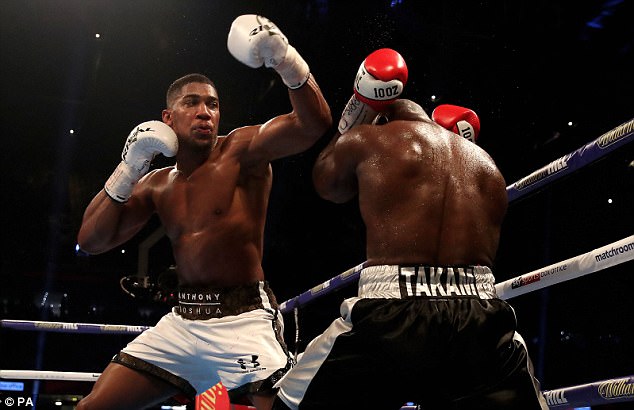 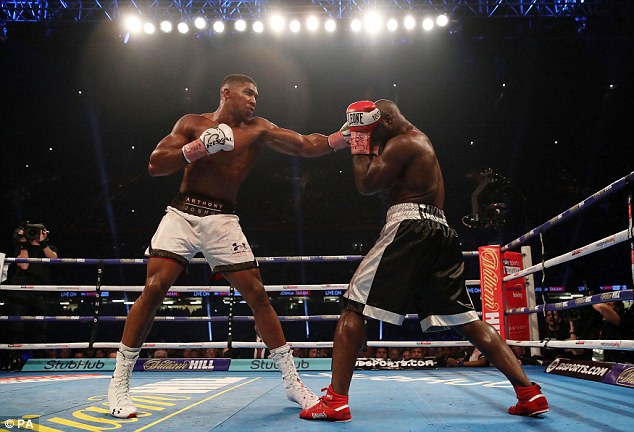 The build-up to the fight had made it feel as if it were an exhibition for Joshua. The withdrawal of Pulev barely seemed to matter. The reality was that no one was coming to Cardiff to see Pulev anyway. They were coming to see Joshua. No one cared too much who his opponent was.

There is a reason for that. In a sport where a sham of a contest between a semi-retired champion and a man who has never fought a boxing bout in his life can become the biggest grossing fight in history, a bone fide champion like Joshua offers hope of salvation for boxing.

After only 20 professional fights, Joshua has already acquired the kind of status that makes celebrities want to be seen with him at ringside. People recognise the real deal when they see it and Joshua has that priceless mix of charisma and talent that makes him box office gold in a sport that needs heroes more than ever.

Joshua appears at ease with his celebrity, too. He is relishing it. Manchester United striker Zlatan Ibrahimovic was in his dressing room before the fight. Tony Bellew visited to wish him good luck, too. People want to be seen with him. He has the respect of fellow fighters as well as the public and the media.

Saturday night’s fight was seen a formality, really. It was a stepping stone. It was something to keep Joshua busy. No one ever seriously considered that Takam might actually constitute a genuine threat to Joshua’s crown. Certainly not the bookmakers, who had Joshua as a 1-50 favourite. It was to be a procession, a gateway to bigger prizes. It didn’t work out like that but it was another dominant victory. 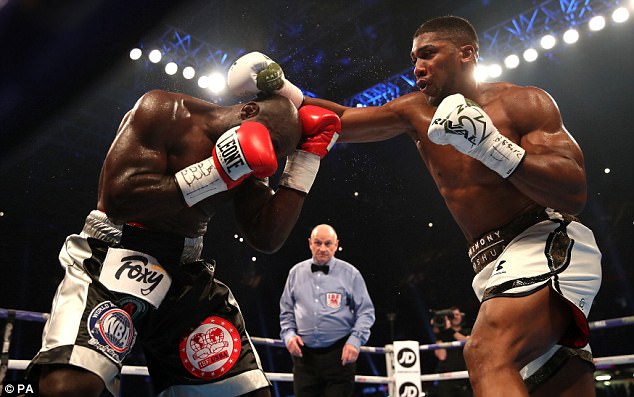 Joshua was cautious in the first round, trying to find his range and adapt to his smaller opponent. Takam offered very little and Joshua did enough to win the round with a couple of straight rights, even if they did not land cleanly.

The fight was halted briefly midway through the second round when Joshua paused after he was caught by a head-butt from Takam that went unpunished by the referee. Joshua took it upon himself to punish Takam instead, peppering him with a series of straight rights and smooth combinations throughout the round.

Bleeding from the nose and angered by the clash of heads, Joshua bore down on Takam in the third but the challenger landed his first decent punch, a left hook that gave Joshua food for thought as he pressed forwards.

Takam began to struggle with the weight of Joshua’s punches in the fourth round and midway through it, he appeared to be asking the referee to stop the fight. The referee sought clarification from him and then waved the fight on.

Midway through the round, Joshua caught Takam with a flurry of punches that put him down and although he recovered quickly, he took a standing eight count. The Frenchman had also suffered a deep cut beneath the right eye and took a long time to get off his stool at the start of the fifth. 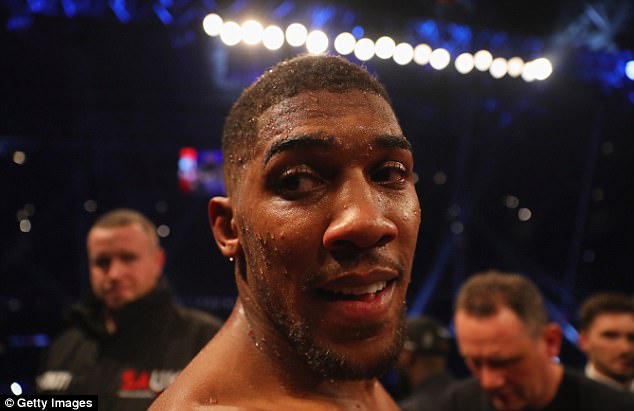 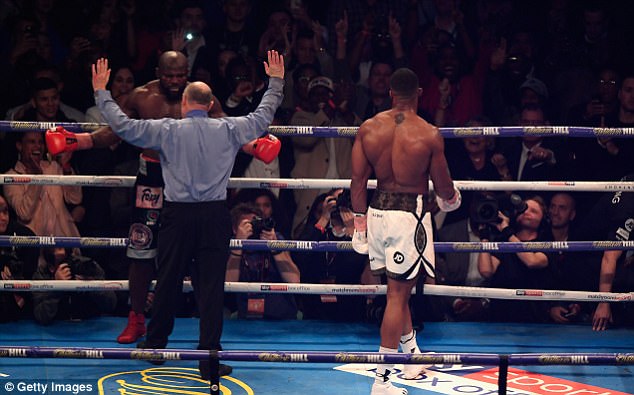 The referee halted the fight in the fifth round to ask the doctor to inspect the cut. Joshua was smiling his way through the round and appeared to be enjoying his work now but he could not get rid of Takam.

Joshua rocked Takam with a right upper cut in the sixth but Takam hit back with a right cross in the seventh round. Joshua began to look tired and for the first time in the fight, there was a concern that he might start to run into trouble if he could not knock Takam out.

At the beginning of the ninth round, the doctor inspected the cut under Takam’s eye again and then muttered in the referee’s ear. It appeared the fight was about to be stopped but Takam was allowed to continue. By now, he had earned the respect of the crowd as well as his opponent.

Takam began to try to pick up the pace of the fight in the tenth round but Joshua caught him with a big right cross and then unleashed a series of unanswered blows. Takam was still on his feet but the referee decided he had suffered enough punishment and jumped in between the two men to signal the end of the fight.