Anti-vaccine mandate protesters have swarmed the ABC’s office in Darwin chanting ‘tell the truth’ before plastering the glass doors with flyers.

Footage taken by journalists standing inside the building shows the rowdy crowds surrounding the building around 2pm on Wednesday.

While some demonstrators belted out slogans, others stormed over to the windows and stuck on posters claiming the national broadcaster was not reporting accurate information about Covid vaccines.

Some stickers claimed ‘The media is the virus’, while others read: ‘It’s not research is they censor opposition’.

Others claimed Indigenous Territorians were being ‘bribed and blackmailed’ to take the jab.

Reporter Isaac Nowroozi confirmed everyone inside the office was safe after concerned followers inquired into their welfare.

Other Australians were outraged by the bizarre attack.

‘Anti science mob threatening staff at the ABC and damaging property. This nonsense has to stop,’ one man said.

‘I hope they enjoy their tax payer dollars being used to clean that up,’ another added.

‘The cognitive dissonance on display is jarring,’ a third wrote.

The incident comes after NT Chief Minister Michael Gunner earlier this month introduced widespread vaccination mandates for workers across a number of industries.

Employees impacted include teachers people who work in customer service roles such as retail, finance, hospitality, vets, gyms, and beauty salons, and health care workers, child care workers, and those who care for the vulnerable. 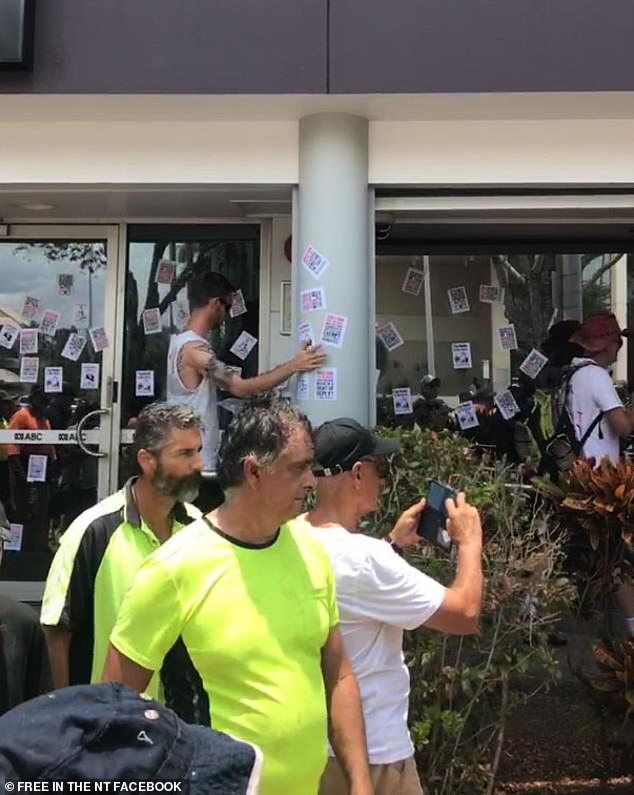 Mr Gunner said workers subject to the policy need to have received both doses by December 24 or would face a $5000 fine or be barred from their workplaces.

The announcement reportedly sparked a massive boost in vaccinations across the territory, with 2243 bookings made in the following 24 hours – compared to the 742 the day prior.

Despite the 303 per cent surge in bookings, the new rule has sparked fierce criticism from some members of the community.

Over the past two weeks, several protests have erupted in Darwin with hundreds of demonstrators flocking to the CBD on weekends to rally against vaccines, mandates, and other Covid-19 restrictions.