Anti-vaxxers have gathered at a popular Melbourne dining strip to protest the state’s Covid vaccination rules.

Dozens of demonstrators lined Acland street’s dining precinct in St Kilda for a sit-in picnic protest on Saturday, calling for an end to ‘vaccination segregation’.

Organisers encouraged protesters via Telegram to gather along the footpath, starting at the Barkly Street end side before indicating a march could proceed to Luna Park.

‘This is a peaceful picnic to highlight the segregation in our state,’ a post on the encrypted app said.

The post also claimed the protest was for ‘every day people who do not want to be outcast’ for refusing the Covid-19 vaccination.

An employee from a local gelato shop, who asked to remain anonymous, told Daily Mail Australia she was worried customers were avoiding the store because of the protesters.

‘They’re invading the space… I’m worried people who are vaccinated won’t come in,’ she said. 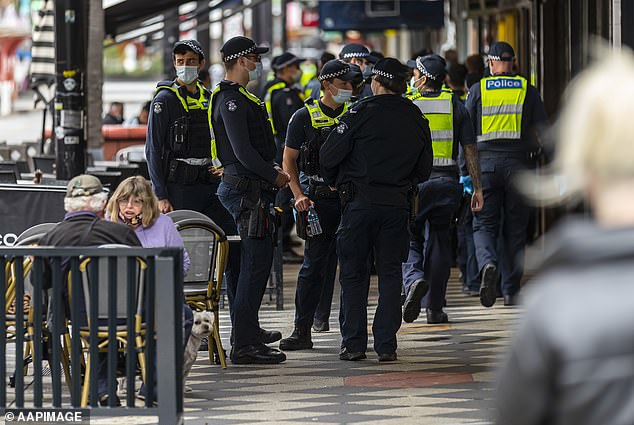 Victoria police confirmed they were aware of planned protests and had a ‘highly visible’ police presence in the area (pictured, officers patrolling St Kilda on Saturday) 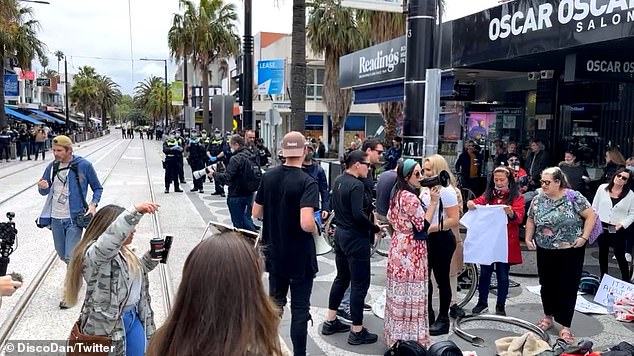 ‘We might be losing customers… there are all these police around.’

She estimated there were roughly 50-100 protesters lined outside the footpath of the business who began gathering at about 1pm.

‘It’s very uncomfortable for us to have to experience this,’ she added.

Another worker at a local cafe, who asked not to be named, said the business was unbothered by the demonstration.

‘Even though it’s right out the front they’re keeping to themselves.’

Victoria police confirmed it was aware of planned protests in Melbourne on Saturday and an increased police presence in the area. 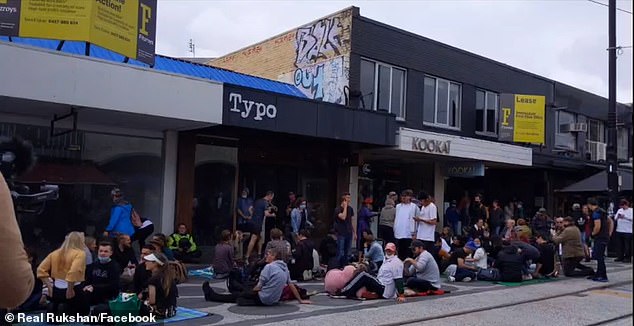 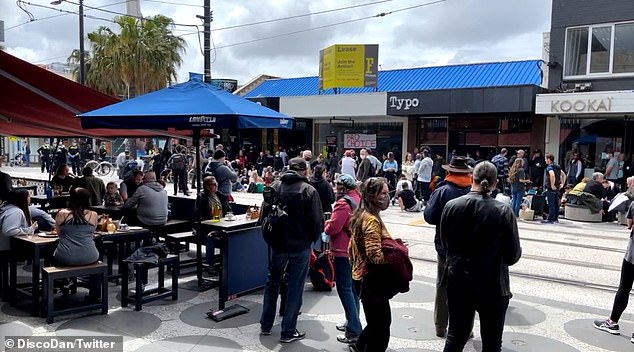 ‘There will be a highly visible police presence in the area to ensure the safety of the community and to ensure the Chief Health Officer directions are being adhered to,’ it said.

This comes as anti-vaxxers in Victoria revealed they have been successfully sneaking into pubs and restaurants without being asked for proof of vaccination.

Boasting about their exploits on social media anti-vaxxers revealed how they have skipped QR check-ins and vaccine passport checks across the state.

Hospitality venues, retail stores and beauty salons are only allowed to cater to double-jabbed residents since lockdown was eased on Thursday.

Premier Dan Andrews took a bold stance promising that unvaccinated residents would not enjoy the same freedoms until ‘well into 2022’.

But anti-vaxxers unwilling to wait until next year to return to stores claim they have been able to slip past check-in systems with some visiting pubs and hair salons.

Defiant shoppers also launched a social media campaign encouraging residents to post a photo of their exploits and shame businesses that refuse them entry.

‘Be a part of #Danslockoutfail by highlighting how the Victorian government will once again fail to enforce its disgraceful mandates,’ the campaign poster read.

The poster encouraged people to visit a venue or shop without showing their vaccination status and to name and shame the businesses on social media who refused them entry.

Stay-at-home orders were lifted for the double jabbed on Thursday as the state hit 70 per cent vaccination coverage after more than 260 days in lockdown.