Anti-vaxxers have begun targeting children, with Piers Corbyn yelling at London pupils in an attempt to scare them off getting the jab while a separate mob picketed a school in Kent.

The notorious conspiracy theorist and his allies were spotted yesterday screaming at pupils and trying to shove leaflets into their hands.

In separate shameful scenes, a group of protesters appeared outside Simon Langton Girls’ Grammar School in Canterbury after the government announced it would begin rolling out Covid-19 vaccines to children aged 12 to 15. 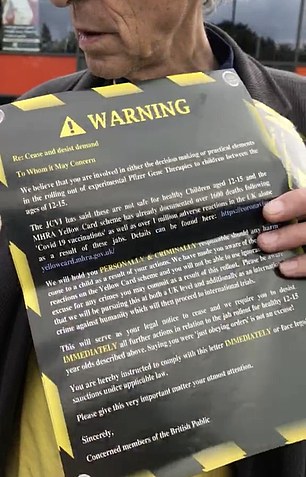 Guidance has been issued for head teachers to contact police if they believe protests could take place as the programme will largely be delivered through schools.

The protesters had already shown up outside the school gates earlier this month when they were seen handing out literature to pupils.

Two days later, the Abbey School in Faversham was targeted, with police being called after a woman was reportedly assaulted.

They have now returned to Langton Girls’, displaying placards from the opposite side of the road for students to read as they arrived.

After the initial protest, the school’s head teacher Paul Pollard circulated a letter to parents accusing the group of engaging in ‘propaganda that has much in common with familiar far-right tropes’.

It read: ‘Following the recent events outside the school, where an anti-vaccination group staged a short protest, and with this announcement raising the possibility that this could happen again, I would like to ensure total clarity around this situation and the difference between the protest made and reasoned debate.

‘The group that protested outside of the school were not engaged in a science-led debate on the decision of whether or not to vaccinate 12 to 15-year-olds.

‘Instead, they were engaged in conspiracy theories, disinformation and various other propaganda that has much in common with familiar far-right tropes.

‘Whilst their protest outside school was peaceful, and very few students accepted leaflets, groups of this nature are working to spread fear and misinformation, not engage in discussion or debate.’ 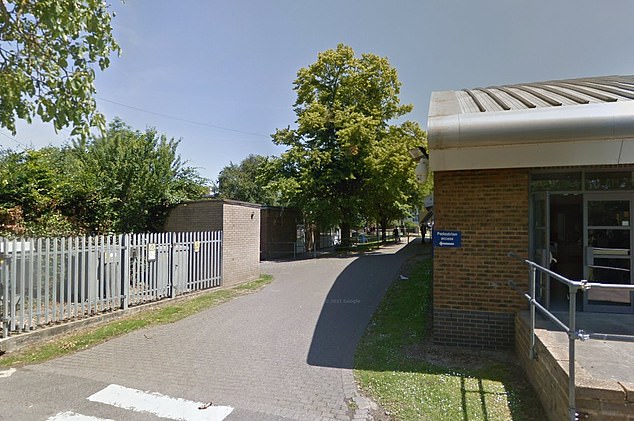 The government has advised children between the ages of 12 and 15 to get a single dose of the Covid vaccine.

Parental consent is not required if a child is considered competent to make the decision themselves.

But in the ‘great majority of cases, children and their parents come to the same decision’, according to England’s chief medical officer Professor Chris Whitty.

Last week, the UK Health Security Agency (UKHSA) said it was aware some schools had received campaign letters and emails with ‘misinformation’ about the vaccine programme.

The agency’s guidance states: ‘In the event of a protest or disruptive activity outside a school, or if schools know a protest is planned, they should alert the SAIS (School Age Immunisation Service) provider, local authority and police contacts to discuss the best way to manage the situation.’

Staff have been advised not to ‘engage directly’ with misinformation campaigns about the vaccine.

Instead, should ‘acknowledge receipt of concerns’ and ‘refer to the latest scientific guidance on the issue’ if necessary.

While they were not informed about the protest, the police will be called upon if they return, Mr Pollard said. 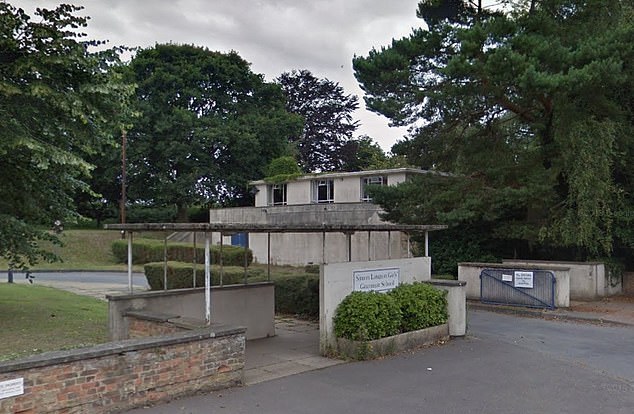 Two days later, the Abbey School in Faversham was targeted, with police being called after a woman was reportedly assaulted

He continued: ‘We will do all we can to discourage students from speaking or accepting material from them.

‘As previously, they will not enter the school site.

‘We would welcome parental support with this and ask that you reinforce with your children that in the event of further protests they should enter school without taking any literature or engaging in conversations.’

The school’s head teacher has already been in contact with the Kent County Council Prevent Education Officer.

Prevent is the government’s controversial strategy to combat extremist views and terrorism.

Documents, including one titled The Anti-Vaxx Playbook which outlines many of the common tropes and narratives being circulated have been provided by the council and shared with parents.

‘This academic year we will be undertaking further whole staff training around extremism and the Prevent strategy, with a focus on contextual threats for our students.

‘We will also be commissioning an external review of our whole school’s safeguarding practices, policies and procedures, something we will routinely do to ensure all areas of safeguarding are as robust as we expect.’