A furious antiques dealer headbutted her father when she could not find her pet snail.

The 28-year-old assaulted her father and left him with a bloody nose as he intervened when she shoved her mother, who was recovering from back surgery.

‘She brought it into the house and wanted to keep it as a pet.

‘On the day in question the snail was not in the house where she left it and she became upset.

‘Her mother describes Kimberly as going ballistic, calling her every name under the sun.’

The confrontation was ‘too much’ for the parents, and Mr Burns called the police.

In a statement read out by the prosecution, Mr Burns said he would not feel comfortable with Kimberly returning to the flat as he was scared of what she might do.

Kimberly was convicted for a common assault in April 2015 and has also received a caution for battery.

In both incidents, the victim was her mother. 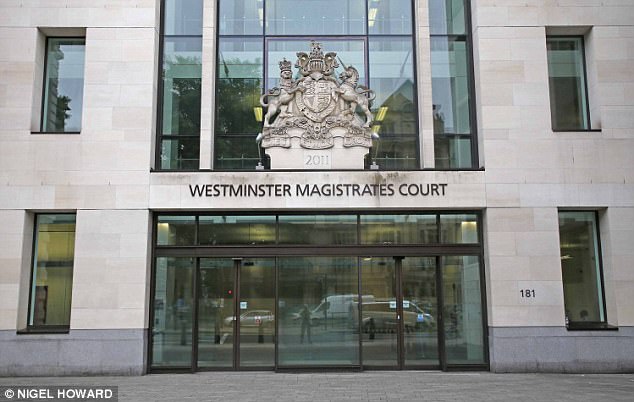 Burns admitted two charges of assault by beating. She was given a 12-month community order, six months alcohol treatment requirement, and must complete 100 hours of unpaid work

But during the hearing Mrs Burns burst into tears in the public gallery and sobbed: ‘We desperately want her home.’

‘She takes full responsibility for her actions, she is very ashamed and distressed that she has caused her parents so much grief over the past five years.

‘She is very sorry that her reactions were out of proportion.

‘She was reckless, she didn’t intend to cause her mother any harm, knowing how fragile her condition is.’

Speaking on behalf of Kimberly’s parents, Ms Dimitrova said: ‘They would love to have Kimberly back home with a plan set up to help her and guide her in the future.’

District Judge Spyros Elia said: ‘Be under no illusion, one of the reasons we took a fair amount of time reaching your sentence is that we were considering very seriously whether you crossed the custody threshold or not.

‘Should you do this ever again you may find the next bench may not be as lenient as we are.’

Burns admitted two charges of assault by beating. She was given a 12-month community order, six months alcohol treatment requirement, and must complete 100 hours of unpaid work.