Ant’s side say they’ve settled the divorce. Her side say not so fast, writes ALISON BOSHOFF

Ant McPartlin is pictured outside Wimbledon Magistrates Court in 2018. He was fined £86,000 and banned from driving after a car accident

Hostilities have been conducted over Twitter, and – exactly two years after the split was announced – it seems they will never end.

Sources close to Ant McPartlin released the news yesterday that his divorce from make-up artist Lisa Armstrong, 43, can finally be described as a done deal, with Lisa having been given everything she wanted.

She is said to receive the £5million former marital home in Chiswick, west London, plus a £31 million slice of Ant’s £50million fortune in a full and final settlement after their 12-year marriage.

Crucially, it has been reported, she has also been allowed not to sign a non-disclosure agreement.

But most importantly of all, she has joint custody of their labrador Hurley – neither side was willing to give up the dog.

This, say friends of Ant, will allow him to ‘finally move on’ – which means he is free to propose marriage to his new love Anne-Marie Corbett, once his personal assistant, whom he started dating in June 2018.

She is his soul mate, sober coach, sounding board and rock.

Recovering alcohol and drug addict Ant, who was fined £86,000 and banned from driving after a car accident in 2018 when, drunk, he overtook on a bend and went head-on into another car, says he couldn’t manage without her.

‘She’s a beautiful soul… She is the most wonderful true woman,’ he says. Some friends think that they will tie the knot this summer.

But hold the Happy Ever After, because, within hours of the news breaking on Wednesday night, Lisa took to Twitter, writing: ‘Nope, a load of nonsense AGAIN.’

Instead of posting a definitive statement, Miss Armstrong replied in a series of cryptic messages to a number of her followers who were questioning the veracity of the claims.

While she didn’t specify which part of the reports she contested, she replied to one person: ‘I deny it cos it’s not true.’ 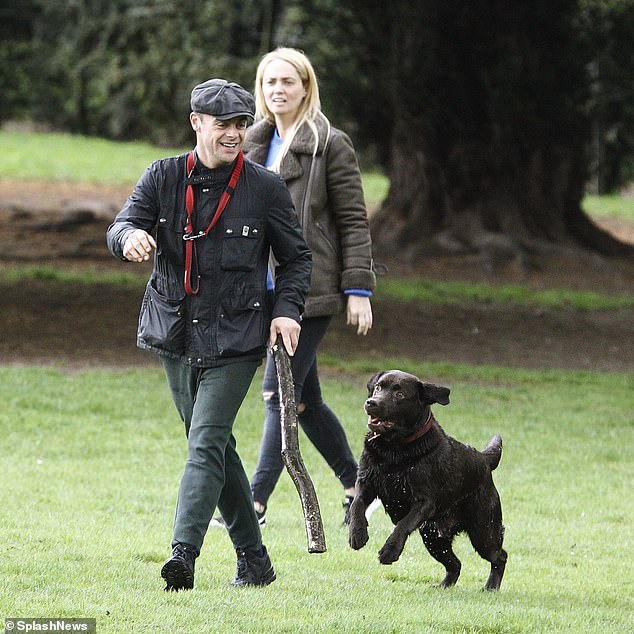 Ant is pictured with girlfriend Anne-Marie Corbett in April 2018 and dog Hurley. Some friends think that they will tie the knot this summer

She ‘liked’ one tweet that stated ‘the only winners are the lawyers’ and another that said ‘no amount of money could ever compensate for what this poor girl has had to endure’.

Representatives for McPartlin and Miss Armstrong did not respond to requests for comment yesterday.

So what are the facts behind this long and acrimonious divorce? Having split in January 2018, they got a decree nisi in October 2018.

They failed to agree terms in March last year with an offer being rejected because Lisa was declining to sign a non-disclosure agreement.

A further settlement offer was reported to have been made in November, but again it was rejected. So have all the issues been settled at the third time of asking?

The couple did indeed meet on Tuesday this week in a bid to thrash out a mediated settlement rather than end up in court. 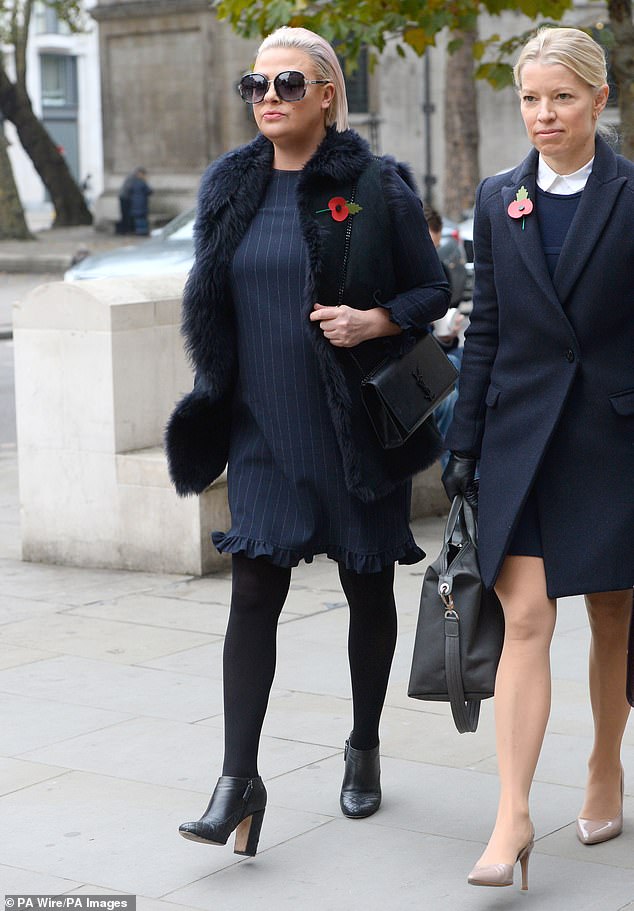 Sources close to Ant McPartlin released the news yesterday that his divorce from make-up artist Lisa Armstrong, 43, can finally be described as a done deal, with Lisa having been given everything she wanted

Negotiations were apparently ‘calm’ and ‘polite’ and Ant was pleased that Lisa was ready to sign the deal which they both agreed.

His friends insist that they both signed it – and that it will assume legal force within weeks. Ant told pals: ‘It’s settled!’

He rejoiced that, after spending £1.5million on legal fees and having arguments with Lisa over everything including her habit of liking mean tweets about his new girlfriend, he was at last to exit the marriage with some dignity – and in the knowledge that Lisa will not be entitled to a slice of his future earnings.

So Ant, 44, can thus look forward to money continuing to roll in from big shows including Saturday Night Takeaway, Britain’s Got Talent and I’m a Celebrity. For perspective, he makes around £12,000 a day. 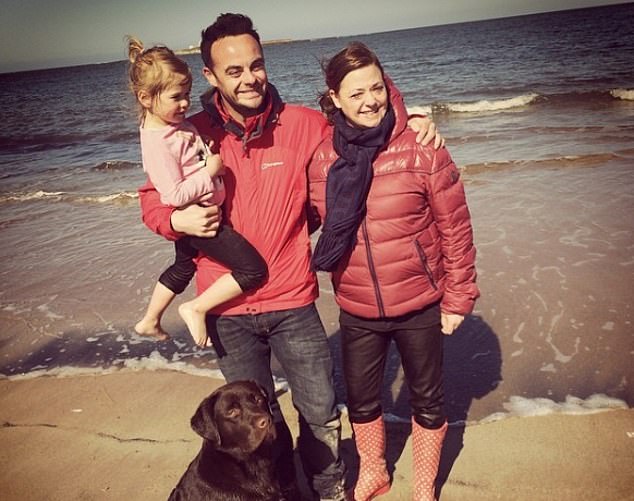 Her view is that she tried loyally to help him during the two-year period when he was becoming addicted to painkillers following a botched knee operation. He has admitted to becoming hooked on a cocktail of prescription drugs including OxyContin, tramadol, morphine, temazepam and diazepam. He is pictured with Lisa in 2015

He’ll be worth half the fortune of his presenting partner Declan Donnelly, but both are very wealthy men, particularly after their recent big money endorsement of Santander bank, which seems to have been agreed to in order to cover Ant’s divorce expenses.

A source close to the divorce said: ‘There was no acrimony and Ant and Lisa both walked away contented.’

However it seems that Lisa isn’t impressed by the news getting out, and is denying it all.

A friend of Ant said: ‘It’s signed, sealed and soon to be delivered! No idea why she’s denying it. It’s madness.’

The friend added: ‘She wants to cling on to this and can’t move on. But the deal is done. It’s not going to court.

‘She’s accepted and signed the settlement.’

The belief is that Lisa is disputing the financial scale of the settlement – saying that she has been given far less than the £31million reported.

The figure is said to be more like £20million.

It’s a messy situation and Ant’s publicist, Simon Jones, did not respond to requests to comment. He was also unable to confirm that the settlement had been signed.

A friend of Lisa says: ‘She is not the kind of person who can be bounced into an agreement. Lisa is the Queen of No.

‘The view in Ant’s camp is that she is as bitter as hell and needs to move on but, knowing Lisa, she will feel that this leak is a strategy to make sure that she sticks with the agreement, and that may make her change her mind over the whole thing.

‘She promised her father on his death bed last year that she would not let Ant “get away” with treating her so badly – dumping her after rehab, despite all her support, and running off with his PA.

‘I know that she is still very hurt by it all. This is not about money, remotely, it’s about dignity and justice and what is right for her.’ 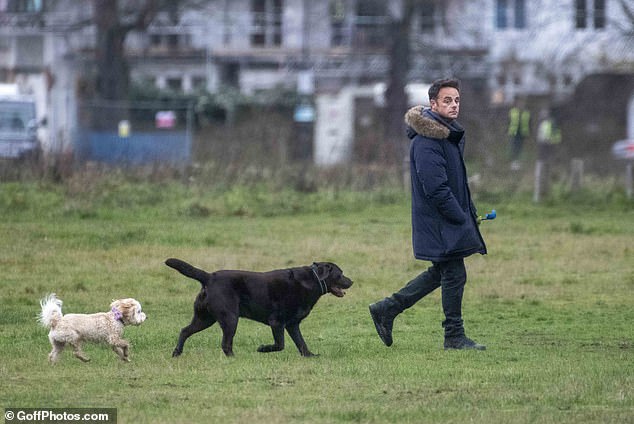 A source close to the divorce said: ‘There was no acrimony and Ant and Lisa both walked away contented.’ However it seems that Lisa isn’t impressed by the news getting out, and is denying it all. Ant is pictured walking dog Hurley and his two maltipoo dogs last month

The alternative to a mediated settlement is for the matter to come to court – an unusual and expensive final option for divorces, which are almost always concluded without that being needed.

Might Lisa, the lead make-up artist on Strictly Come Dancing, still push for this outcome? She certainly regards herself as very much the injured party.

Her view is that she tried loyally to help him during the two-year period when he was becoming addicted to painkillers following a botched knee operation.

He has admitted to becoming hooked on a cocktail of prescription drugs including OxyContin, tramadol, morphine, temazepam and diazepam.

A friend said: ‘From my understanding, although they both always loved to booze, he was the one with the drug problems alone and she had to deal with all of that for years.’

When Ant came out of rehab, he never came home to her. She spent six months insisting that the marriage wasn’t over, saying on Twitter: ‘I’m not estranged, thank you.’

But he then released a statement in January 2018 to say that the marriage was over, and by June had moved on with Anne-Marie.

Lisa raged on Twitter: ‘And to think she was MY friend. My friend and OUR PA who I let into our home.’

Yesterday she liked tweets that stated: ‘No amount of money could ever compensate for what this poor girl has had to endure’, and ‘Get what you can! You deserve it! Terrible treatment of you since you found out when we did! And with a so-called friend! It’s heartbreaking behaviour.’

Ant’s view is that they just fell out of love – a matter of regret, but not a case of betrayal.

Lisa, though, pursued the divorce on the grounds of adultery, which Ant admitted in order to get the ball rolling as his romance with new love Miss Corbett began while he and Lisa were still technically married.

He and Lisa started dating in 1995, when they were both 19. He was famous as one half of the singing duo P J and Duncan, named after the characters he and Dec had played in Byker Grove.

Lisa was in the manufactured band Deuce. She said: ‘When we met there was something about his hair and eyes that made me feel all gooey.’

In the first ten years of their romance, Ant built a career as a TV presenter with success on SM:tv Live followed by Pop Idol and Saturday Night Takeaway.

Deuce split, and Lisa, a graduate of the Brit school and one time disco dance champion, retrained as a make-up artist.

She remains highly successful, although she no longer works on Britain’s Got Talent alongside Ant, for obvious reasons.

The wedding, in July 2006, was at Cliveden House in Berkshire. Ant said at the time: ‘I’ve found that the key to a long and happy relationship is to not answer back. And to buy her loads of shoes.’

In an interview in 2013, Ant revealed that he and Lisa had been trying for three years to conceive. 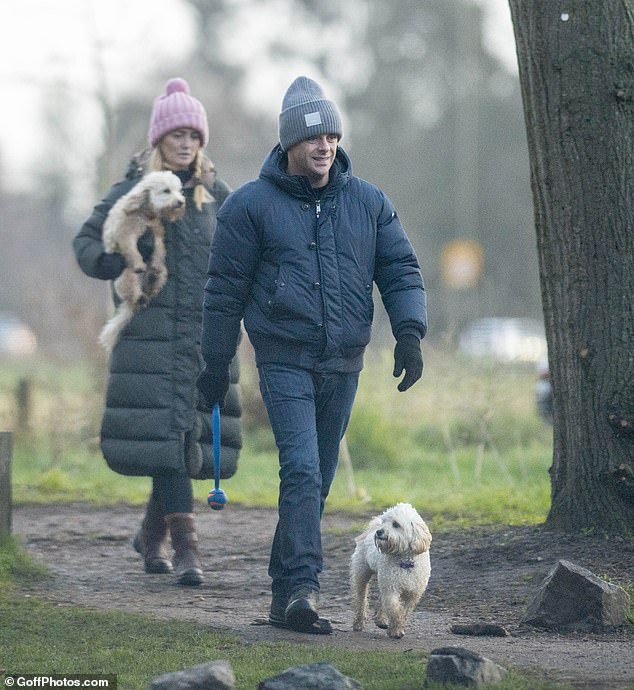 He then released a statement in January 2018 to say that the marriage was over, and by June had moved on with Anne-Marie. He is pictured on a dog-walk with Anne-Marie Corbett in Wimbledon earlier this week

He commented in 2017: ‘I would just say it’s a very private matter. We’ve struggled. Like a lot of couples do. It’s very personal.’

Labrador Hurley came into their lives in 2013, as they struggled to conceive a child – and the joy that he brought them seemed to help to fill that void of longing to start a family.

Sadly after their split, Hurley was the biggest sticking point to resolving the divorce.

A friend told me: ‘Most of all, and above all, it is all about the dog. They cannot agree. Both of them will be heartbroken if they lose Hurley. He has said she can have anything she wants — except for Hurley.’

Each has the dog for a week at a time, and the handovers have proved flashpoints in the past. Now it’s thought that an assistant chauffeurs Hurley to and fro.

Ant said in an interview: ‘There’s a loyalty and a love and a companionship with Hurley that you can’t describe. Hurley’s welfare comes first and we both love him very much. That’s the way it is really.’

In February last year, Ant bought maltipoo puppies Bumble and Milo, which help to keep him company on the weeks when he doesn’t have Hurley.

Meanwhile he has been working hard to rehabilitate himself. He returned to Britain’s Got Talent and I’m A Celebrity last year.

A documentary was also broadcast about Ant’s family history – showing, somewhat inconclusively, that Ant and Dec are related by a very distant Viking ancestor.

As for co-star Dec, he said on camera that Ant ‘meant the world’ to him and he was never happier than when they were together.

‘He is like a part of me,’ said Dec, tearfully. ‘It would be like losing a limb if I lost him from my life.’

In a smart house in Chiswick, Lisa Armstrong knows exactly how that feels.