ANZ predicts millions of Aussies will get a HUGE pay rise

The ANZ bank is predicting Australia’s 2.2million minimum wage workers will get the biggest pay rise in 12 years – although it still won’t be enough to keep up with inflation.

With average petrol prices now back above $2 a litre, Prime Minister Anthony Albanese has indicated his new government will be lobbying the Fair Work Commission to be more generous in its annual wage review.

ANZ predicted the industrial umpire was more likely to award a 4 to 4.5 per cent increase in the minimum wage from July 1.

This would be the biggest pay increase since 2010, with young women in the food and accommodation, and retail sectors most likely to benefit from any decision.

‘This would be the largest percentage increase since 2010, when there was some catch-up following the freeze in the wake of the GFC,’ ANZ senior economist Catherine Birch said.

‘But as it would be less than current headline inflation, it would still amount to a cut in real wages, especially as inflation continues to accelerate.’

The ANZ bank is predicting Australia’s 2.2million minimum wage workers will get the biggest pay rise in 12 years – but a 4.5 per cent increase won’t be enough to keep up with inflation

How much YOUR pay would go up under a 4.5 per cent pay rise

Ms Birch said the Fair Work Commission was likely to ‘recognise the need for some catch up’ after minimum and award wage income earners had small increases since the pandemic began in 2020.

But even with a generous 4.5 per cent increase, minimum wage workers would still effectively be dealt a pay cut, with headline inflation in the year to March surging by 5.1 per cent – the fastest pace in 21 years.

This means the typical Australian worker  has seen their real wages fall because of high inflation – regardless of whether they were employed under an award or on an individual contract.

Pay increases have been stuck below the long-term average of 3 per cent since mid-2013 but ANZ is expecting wages growth across the labour force to this year return to the 3 per cent mark, with unemployment in April falling to a 48-year low of 3.9 per cent.

‘Workers are more likely to have their pay set by awards if they are female, young, in small-to-medium-sized businesses, in lower paid occupations or in industries like hospitality, health and retail,’ Ms Birch said.

During the election campaign Mr Albanese said he ‘absolutely’ supported the idea of the Fair Work Commission awarding a 5.1 per cent pay rise to minimum wage workers.

On Friday, on his five day on the job, he indicated he would be lobbying for a generous pay increase for the low paid, after advocating a $1 an hour increase to the minimum wage.

‘Today I will be writing to the Fair Work Commission to indicate that an Albanese Labor Government will be making a submission on the minimum wage case,’ he said. 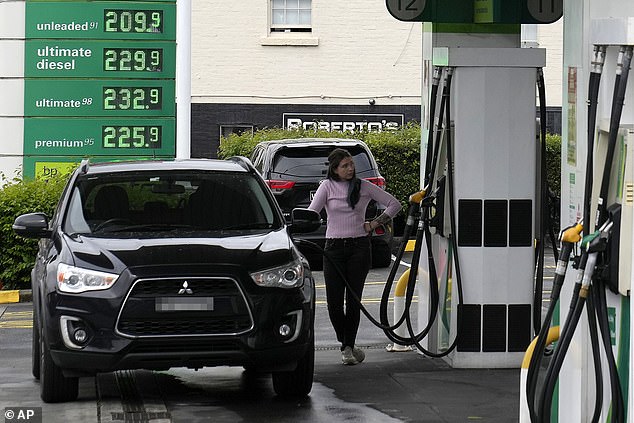 Minimum wage workers would still effectively be dealt a pay cut, with headline inflation in the year to March surging by 5.1 per cent – the fastest pace in 21 years (pictured is a Sydney service station)

‘People who are on the minimum wage can’t afford to go backwards.

‘Over the past decade, the cost of everything has gone up while wages have gone nowhere.

‘The work of getting wages moving again has already begun.’

The ACTU is pushing for a 5 per cent wage increase, with final submissions closing on June 7.

‘Our annual wage review claim for a 5 per cent increase is what is needed for Australian workers to keep their heads above water, with inflation and the cost of living rapidly rising,’ secretary Sally McManus said.

Employer groups are far less generous with the Australian Industry Group calling for an increase of just 2 per cent, arguing most workers were already receiving generous tax cuts.

‘Minimum wage increases are a very blunt instrument,’ it said.

‘They impose costs on employers.’

If the AI Group had their way, workers would see their wages rise by even less than last year’s 2.5 per cent increase when inflation was much less severe.

Australia’s cabinet ministers are still paid a lot less than the head of government business enterprises.

NBN Co chief executive Stephen Rue is on a $2.647million package, ahead of Snowy Hydro CEO Paul Broad on $2.250million.

Reserve Bank of Australia Governor Philip Lowe has a $1.076million remuneration package, amid expectations he will raise interest rates seven more times in the coming year to tackle inflation being well above the 2 to 3 per cent target.

When it came to the ultra wealthy, mining magnate Gina Rinehart topped The Australian Financial Review’s Rich List with a fortune of $34billion.

This put her ahead of iron ore magnate Andrew Forrest, with the Fortescue Metals boss having an estimated fortune of $30.72billion.

Atlassian software co-founder Mike Cannon-Brookes was third on $27.83billion, ahead of his business partner Scott Farquhar on $26.41billion.

With average petrol prices now back above $2 a litre, Prime Minister Anthony Albanese has indicated his new government will be lobbying the Fair Work Commission to be generous in its annual wage review