A Treasury document has estimated the UK’s deficit could reach £337billion this year because of the pandemic, compared to the forecast £55billion in March’s Budget.

The paper said measures including income tax hikes, a two-year public sector pay freeze and the end of the triple lock on pensions may be required to fund the debt.

But public sector unions are insistent their members should not share the burden of averting national bankruptcy.

It comes as workers who are trying to get to the office have their efforts frustrated by unbending unions who refuse to put on more services and tell their members they have a ‘legal right’ to refuse to return to work.

The nation’s biggest teaching union has also told its members not to ‘engage’ with the government’s plan to start reopening schools on June 1. 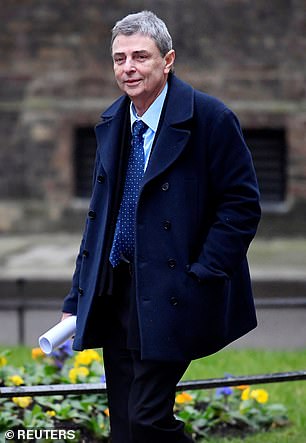 Chairman of the Police Federation of England and Wales John Apter (left) called any move ‘morally bankrupt’ and urged the Government to rethink plans to ‘punish workers’. General Secretary of UNISON David Prentis (right) added he was ‘absolutely appalled’ by the reports and branded it ‘disgraceful’ 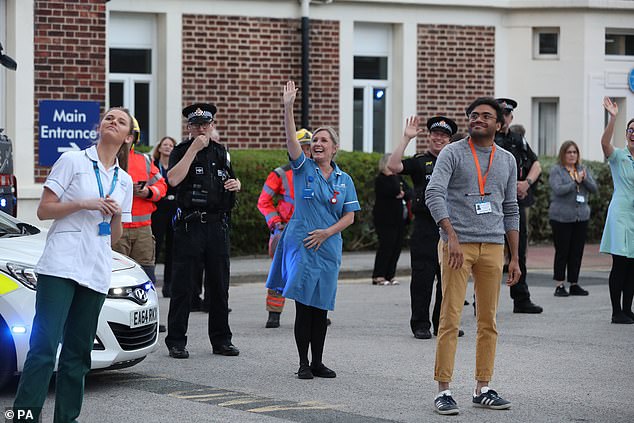 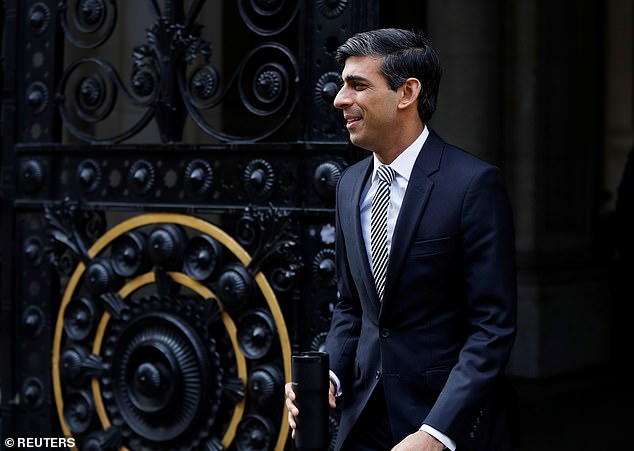 A Treasury document estimated the UK’s deficit could reach £337billion this year because of the pandemic, compared to the forecast £55billion in March’s Budget (pictured, the Chancellor today)

Chairman of the Police Federation of England and Wales John Apter said: ‘If there is any consideration in financially punishing our public sector workers then I urge a rethink.

‘The Chancellor, Rishi Sunak and thousands of others have clapped for our key workers every Thursday.

‘To even consider freezing the pay of our essential public sector workers to help the financial recovery would be morally bankrupt and would be a deep and damaging betrayal.’

What is the current public sector pay

From 2011 to 2018 most public sector pay was capped at 1 per cent. This came during the Cameron government’s austerity measures.

But it meant salaries did not keep up with inflation as it increased.

Currently, NHS staff are on a three-year 6.5 per cent pay rise as part of a package set out in 2018.

Policemen two years ago got a 2 per cent increase in pay, and last year were given a 2.5 per cent boost.

‘To even contemplate pay freezes for those currently putting their lives on the line is disgraceful, and UNISON will fight these plans every step of the way.

‘NHS workers, care workers and other key workers don’t need their pay freezing – they need proper pay rises, especially after the heroism of recent months. Anything less would be a slap in the face to those we applaud each week.’

Prospect general secretary Mike Clancy added: ‘Responding to an economic shock on this scale with more austerity and pay cuts for public servants would be like throwing water on a chip pan fire.

‘The challenge the country will face in the next few years will be getting the economy growing again quickly, saving jobs, and keeping wages steady so that demand in the economy doesn’t plummet.

‘Slashing the wages of the public servants who have helped us through this crisis would not only be immoral, it would only make the situation worse, leading to a spiral of cuts and unemployment that will hamstring Britain for a decade.

‘Ministers must ignore these proposals and focus government attention on saving jobs, supporting incomes, and getting the economy firing on all cylinders once it is safe to do so.’ 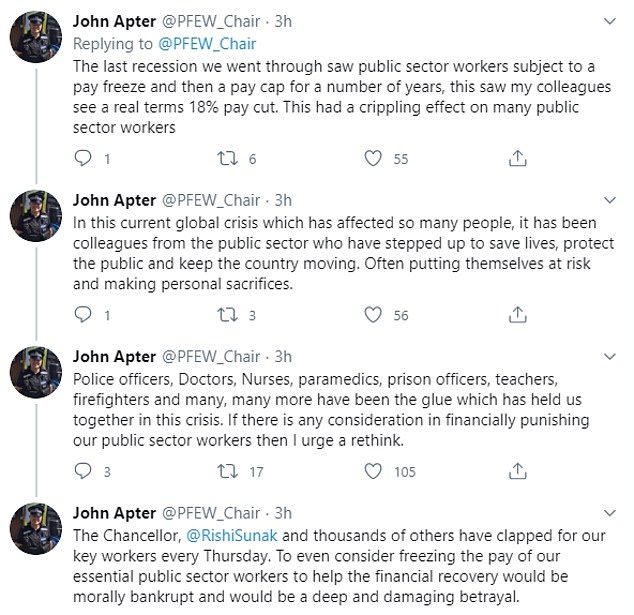 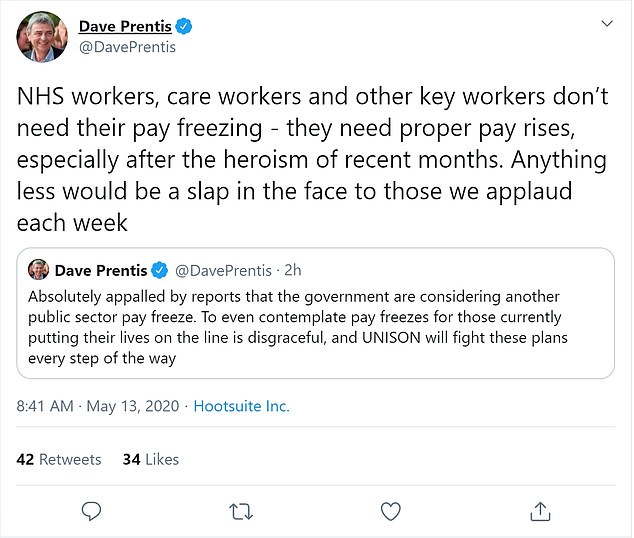 Meanwhile private sector workers have seen jobs slashed in the thousands during the crisis.

Last month a study estimated the coronavirus lockdown will take more than 6.5million jobs out of the economy.

Institute for Social and Economic Research at the University of Essex said it equated to around a quarter of the UK’s total jobs.

Labour urged Boris Johnson and Mr Sunak to reject public sector spending cuts as a way of paying off the cost of the pandemic.

Shadow chancellor Anneliese Dodds said: ‘A lack of resilience in our public services, caused by 10 years of underfunding, has made it harder to deal with the challenge of coronavirus.

‘After all our public services and key workers have done to save lives during this pandemic, there must be no return to a society where we lack that resilience.

‘Both the Chancellor and the Prime Minister must urgently make a statement rejecting these plans.’

The Treasury document is said to state: ‘To fill a gap this size (in the public finances) through tax revenue risers would be very challenging without breaking the tax lock.

‘To raise fiscally significant amounts, we would either have to increase rates/thresholds in one of the broad-based taxes (IT, NICS, VAT, CT) or reform one of the biggest tax reliefs (e.g. pensions tax).’

In the worst-case scenario, the assessment reportedly warns the deficit could increase to £516billion in the current financial year. 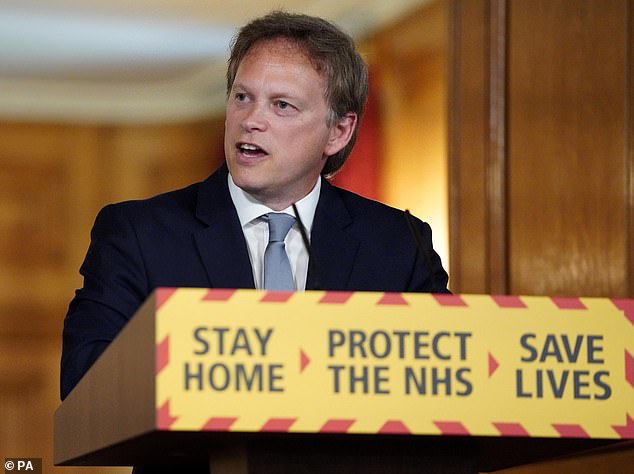 Transport Secretary Grant Shapps said he did not recognise the figures quoted by the Telegraph.

‘It is too soon to get into those figures. I don’t recognise those figures. Time will tell, but the careful management we are going through at the moment is the best way to ensure the economy can recover,’ he told the BBC Radio 4 Today programme.

The Treasury declined to comment on the report, but it is understood the document is one of many put together by different teams to discuss ideas about future policy.

A source said the document ‘does not reflect Government policy’.

The Tories pledged in their manifesto at the general election the party would not raise income tax, VAT or National Insurance and would keep the pensions triple lock.