Cook spoke on Saturday at the China Development Forum in Beijing, responding to a question about Facebook’s handling of the Cambridge Analytical data harvesting scandal, according to Bloomberg.

The consulting firm allegedly purchased profile data on 50million Facebook users from a personality quiz app in violation of the site’s terms of service.

‘I think that this certain situation is so dire and has become so large that probably some well-crafted regulation is necessary,’ Cook said after being asked if the use of data should be restricted in light of the Facebook incident.

‘The ability of anyone to know what you’ve been browsing about for years, who your contacts are, who their contacts are, things you like and dislike and every intimate detail of your life – from my own point of view it shouldn’t exist,’ Cook said.

His remarks will increase pressure on Facebook, which drew criticism for allowing third parties to amass detailed information on its users.

Facebook’s advertising business depends upon the kind of detailed data collection that allows for microtargeting of advertising, however, and the company’s stock has fallen 14 per cent since reports of the scandal first broke.

Cook said that Apple had long been worried that mass collection of personal data had gone too far.

‘We’ve worried for a number of years that people in many countries were giving up data probably without knowing fully what they were doing and that these detailed profiles that were being built of them, that one day something would occur and people would be incredibly offended by what had been done without them being aware of it,’ he said.

‘Unfortunately that prediction has come true more than once.’ 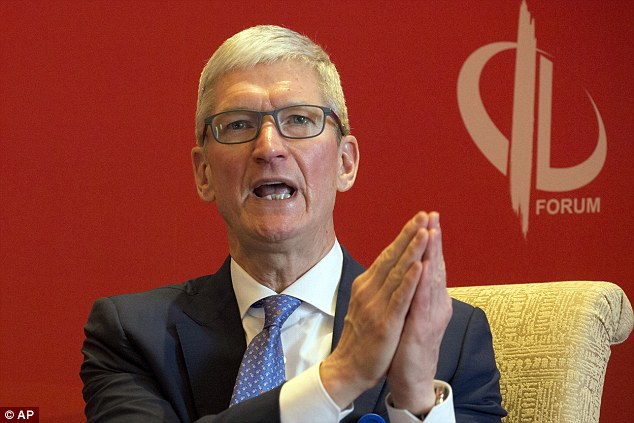 Cook’s remarks will increase pressure on Facebook, which drew criticism for allowing third parties to amass detailed information on its users 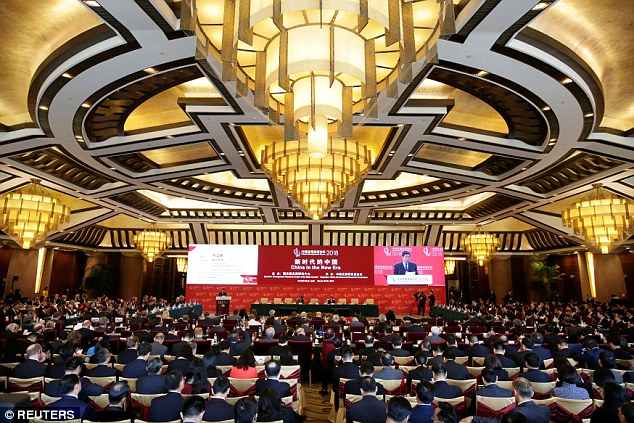 Cook’s appearance at the annual summit in Beijing came amid rumbling of a trade war between the US and China.

President Donald Trump’s plans for tariffs on up to $60 billion in Chinese goods prompted China to declare plans to levy duties on up to $3 billion of US imports including fruit and wine.

Last year, the US ran a trade deficit with China of $375billion, nearly half of America’s global trade deficit.

Cook, who is co-chairing the forum, told the meeting that the business community ‘has always supported the idea that open markets foster new ideas and allow entrepreneurship to thrive.’

Apple manufactures many of its products in China, taking advantage of the cheap labor available there.

‘The strongest companies and economies are those that are open – those that thrive on diversity of people and ideas,’ said Cook, calling for ‘calm heads’ in the brewing trade dispute.