The new 14-inch and 16-inch computers are powered with the M2 Pro and M2 Max chips, the tech giant’s in-house chips that replaced those made by Intel.

M2 Pro has nearly 20 percent more transistors than M1 Pro, twice the unified memory bandwidth than M2, and up to 20 percent faster than the 10-core CPU in M1 Pro.

While M2 Max is deemed the world’s fastest, with 10 billion more transistors than M1 Max and more than three times that of M2.

The Tuesday announcement was a surprise, as Apple has four launch events in a year, with the first spring event scheduled in March when Apple launches its iMacs and accessories.

‘With an even more powerful CPU and GPU, support for a larger unified memory system, and an advanced media engine, M2 Pro and M2 Max represent astonishing advancements in Apple silicon.’

M2 Pro consists of 40 billion transistors, along with It features 200GB of unified memory bandwidth and up to 32GB of low-latency unified memory.

While M2 Max is designed with 67 billion transistors.

M2 Max can compile code up to 25 percent faster than M1 Pro, and up to two and a half times faster than MacBook Pro with an Intel Core i9 processor.

According to Apple, this chip ‘is the world’s most powerful and efficient chip for a pro laptop.’ 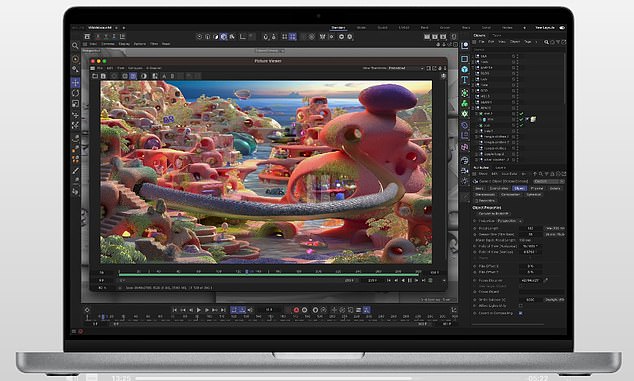 Apple said the new chips allow users to do tasks on the Mac mini that were never possible.

Both chips include Apple’s next-generation, 16-core Neural Engine, capable of 15.8 trillion operations per second and up to 40 percent faster than the previous generation. 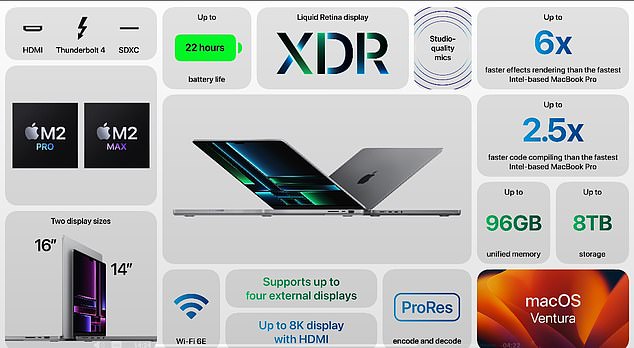 Both MacBooks have up to 22 hours of battery life on a single charge, support WiFi 6E and come with the new macOS 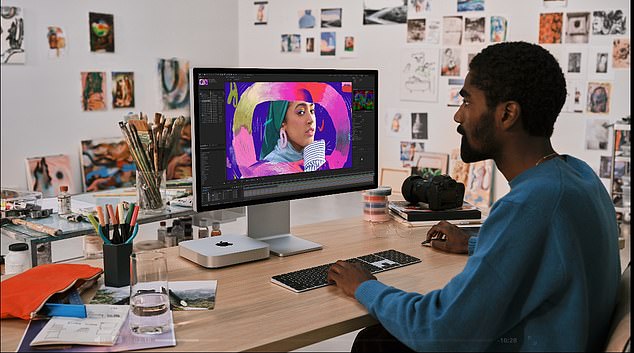 Along with the new MacBooks, Apple also unveiled a new Mac mini with the M2 and M2 Pro chips for the first time

Both MacBooks have up to 22 hours of battery life on a single charge, support WiFi 6E and come with the new macOS.

Along with the new MacBooks, Apple also unveiled a new Mac mini with the M2 and M2 Pro chips for the first time.

The new Mac mini keeps the original design but will perform similarly to the new MacBook Pros.

These include producing music, photographers can adjust huge megapixels in minutes, and creators can work seamlessly with a multi-camera.

And the Mac mini is now suitable for gamers.

The new ‌Mac mini‌ starts at a lower price of $599 and can be configured with either ‌M2‌ or ‌M2‌ Pro and up to 32GB of memory.