The walls of Apple’s new headquarters made of glass, giving the feeling of remaining in nature even after stepping inside

Apple’s new “spaceship” headquarters peeked above a nearby hillside as the sun shined gloriously through towering glass walls of the entryway to Steve Jobs Theater.

The smell of freshly turned soil was heavy in the warming air even as the site was inaugurated with the unveiling of a 10th anniversary iPhone at Apple Park in Silicon Valley.

“Apple Park has been built to reflect Apple’s values for technology and the environment,” chief executive Tim Cook said after paying tribute to late Apple co-founder Steve Jobs at the first-ever media event at the new campus Tuesday.

“The park itself was converted from a sea of asphalt to a green space with more than 9,000 trees; designed to be transparent with nature and bring the outside in.”

Glass walls give the feeling of remaining in nature even after stepping inside.

Plants and trees taking root throughout the grand campus are native to California, and drought-resistant.

All the electricity needed to run the campus comes from an on-site solar power system, one of the largest in the world. 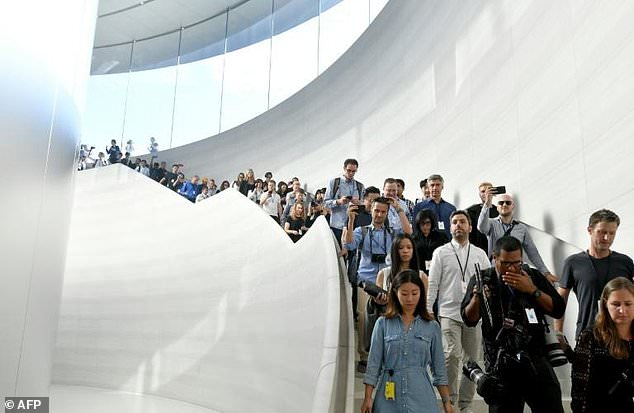 Light streams down onto a curved stairway made of gold-toned stone leading down to Steve Jobs Theater built into the hill.

“Steve Jobs was an incredibly detail-oriented person, and this was his baby,” said Creative Strategies analyst and Silicon Valley veteran Tim Bajarin.

“This should be a crown jewel in the sense of design.”

Apple Park was created with “extraordinary attention to detail and materials,” according to Cook.

A visitors center that will open to the public later this year features an augmented reality experience to virtually explore the campus.

About six months ago, workers began boarding the futuristic new campus, fulfilling a vision set out by Jobs, the company’s late founder.

The process of moving more than 12,000 people to a new campus that Jobs envisioned as a “center for creativity and collaboration” was expected to continue late into the year.

A theater on the new Apple Park campus was named in honor of Jobs, who died six years ago after a battle with pancreatic cancer.

“Steve’s vision for Apple stretched far beyond his time with us,” Cook said in a release earlier this year.

“He intended Apple Park to be the home of innovation for generations to come.”

The 175-acre (70-hectare) campus with a ring-shaped main building clad in giant panels of curved glass blends workspaces and parkland.

“I was amazed at the landscape,” Bajarin said after leaving Apple Park.

“It was staggering how huge the campus is.”

The ring design is aimed at fostering better collaboration among those working inside.

“It is a unique design; very different that what you think of with a Silicon Valley campus,” analyst Bajarin said.

“We are used to campuses where there are multistory buildings close together — Apple broke with convention.”

Campus features include a fitness center, foot paths, research labs and an orchard.

“We have approached the design, engineering and making of our new campus with the same enthusiasm and design principles that characterize our products,” Apple chief design officer Jony Ive said in a statement.

Jobs, a tech-savvy marketing genius, and Steve Wozniak, who invented the Apple computer, formed what would become the world’s largest corporation with eye-popping annual profits.

The two college dropouts created the company that has changed the way people use computers, listen to music, communicate on the go, and made people at home in a world of “apps” tailored for work, play, education, health and more.

The new campus is in Cupertino as well, with the Jobs Theater on a hilltop overlooking meadows and the main building.

“Steve (Jobs) was exhilarated, and inspired, by the California landscape, by its light and its expansiveness,” his widow Laurene Powell Jobs said.

“It was his favorite setting for thought. Apple Park captures his spirit uncannily well.”

Cook began the first-ever media event in the theater with a tribute to Steve Jobs, whose image and words were shared with the audience.

“I love gearing his voice, and his inspiring message,” Cook said.

“We dedicated this theater to Steve because we loved him and because he loved days like this.”

Cook hosted an event at which Apple laid claim to the future of the smartphone with a 10th anniversary iPhone X, featuring facial recognition unlocking, augmented reality capabilities and other refinements the star of the presentation.