A 46-year-old man’s life was saved after his Apple Watch alerted him that his irregular heartbeat was a medical emergency.

Ed Dentel was sitting at home in Richmond, Virginia, on Thursday night completing a software update for his watch when he decided to download the electrocardiogram app.

The application sounded off right away for atrial fibrillation, a dangerous type of abnormal heart rhythm.

The father-of-one described the medical ordeal to DailyMail.com and how doctors told him that if the watch hadn’t alerted, he could have suffered a fatal heart attack or stroke years down the road.

Ed Dentel, 46, from Richmond, Virginia, was at home on Thursday night when he got an alert that he had atrial fibrillation, or AFib. Pictured, left to right: Dentel, his daughter Kayleigh, and his wife Natalie 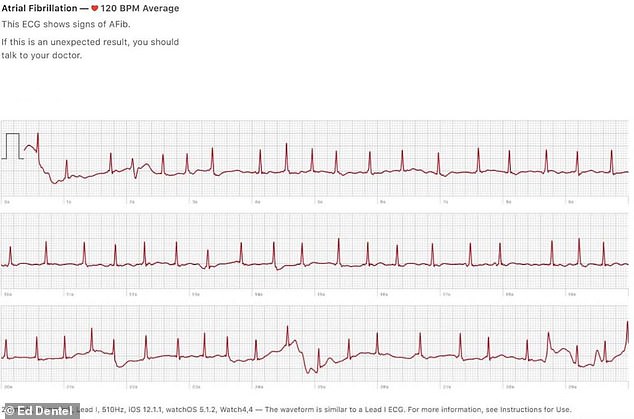 AFib is an irregular and rapid heart rhythm when the upper chambers of the heart beats out of coordination with the lower chambers. A normal resting heart rate is anywhere between 60 to 100 beats per minute – Dentel’s was between 120 and 140 beats per minute (above)

Dentel said he didn’t think much of the alert after the first warning because he didn’t have a history of heart problems and went to bed.

However, the next morning, after having breakfast with his seven-year-old daughter, Kayleigh, the watch sent out the same AFib alert.

Dentel’s wife, Natalie, woke up and he told her to put the smartwatch on and ran the app. Her heart rate came back as normal.

So Dentel put the watch on his other wrist, then tried the underside of his wrist. No matter which way he positioned it, he got an AFib warning.

‘I took it from her and I tried it on the top of the wrist and the bottom of the wrist,’ he told DailyMail.com.

‘I thought maybe it’s the bone structure, maybe my wrist is too hairy, I don’t know. But I tried it several more tries and it kept saying the same thing.’

Starting to become nervous, Dentel went to a Patient First urgent care center and nearly turned around after coming across a full parking lot and overcrowded waiting room. 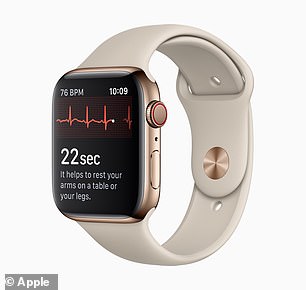 Doctors at an urgent care center diagnosed Dentel with AFib. Because the condition can lead to fatal heart attacks and strokes, they told him the watch had likely saved his life

After he entered the center and signed in, Dentel said he felt embarrassed explaining that a new feature on his watch was telling him something was wrong.

However, a technician quickly ushered him to into a room and hooked him to an EKG machine. He then fetched the doctor.

‘The doctor said: “You’re in AFib. The watch may have just saved your life”,’ Dentel said.

It was a shocking discovery for the father-of-one who does taekwondo with his family, is a regular biker and skier, and has no history of heart problems.

The physician referred Dentel to cardiologist who, after examining him and reviewing the original EKG, confirmed his diagnosis.

Normally, the heart contracts and relaxes to a regular beat so blood can flow to other organs.

However, in AFib, the upper chambers of the heart beat out of coordination with the lower chambers, which weakens heart muscles. 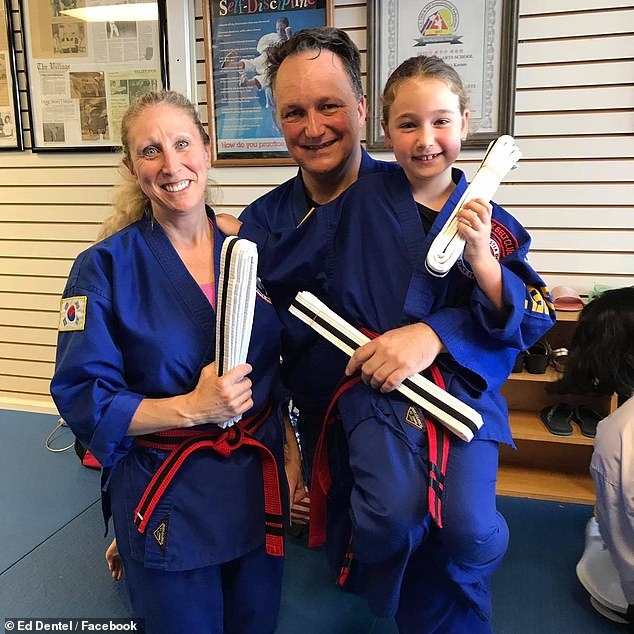 Dentel is now on a prescription that has lowered his heart rate and will be undergoing tests to determine the cause. Pictured, left to right: Dentel’s wife Natalie, Dentel, and his daughter Kayleigh

Clots can form and, if they enter the blood stream, they can become lodged in arteries and cause fatal heart attacks or strokes.

Some people have no symptoms and are only diagnosed after a physical exam. But others might experience symptoms including fatigue, a fluttering feeling in the chest, dizziness and shortness of breath.

According to the American Heart Association, at least 2.7 million Americans have this condition.

Dentel was given a prescription for Dilitiazem, which is used to treat high blood pressure and control chest pain.

He’ll be undergoing additional tests this week to try and determine the cause of his AFib.

Dentel said he is now urging everyone to get themselves checked.

‘If somebody else, a mom or dad in their 30s or 40s, put this on or some other gadget and catches it now and it gives them more time with their family, that’s all I want out of this,’ he said.