A 28-year-old reporter claims the only reason he is only alive today is because of a notification on his Apple Watch.

James Green credits the gadget, which costs between $329 and $1,399 for the latest model, with spotting a life-threatening blood clot on his lungs.

His timepiece notified him of a sudden rise in his heart rate – a sign of a pulmonary embolism – which he had already suffered once before.

It prompted him to seek urgent medical help, and doctors later diagnosed him with the clot – which can kill in minutes as it stops blood from reaching the lungs.

Mr Green, from New York, tweeted: ‘Never thought a stupid lil [sic] wrist computer I bought two years ago would save my life.

‘Saw my heart rate go up, ended up being a pulmonary embolism.’ His warming post has since been retweeted 11,000 times.

James Green credits the gadget, which costs between $329 and $1,399 for the latest model, for spotting a life-threatening blood clot in his lungs

Mr Green, from New York, tweeted: ‘Never thought a stupid lil [sic] wrist computer I bought two years ago would save my life’

An alert from his watch prompted him to pay attention, as it showed his heart wasn’t stooping to its regular resting rate.

Not a panic attack

Mr Green, who suffers from anxiety, quickly realized his symptoms were much more sinister than a panic attack.

He then sought help at a medical center where a CT scan showed the clots on his lungs, Mr Green told The Telegraph.

‘They did a couple of ultrasounds to monitor and put me on a blood thinner drip to reverse the clot damage,’ he added.

‘It was the data I needed to prove this wasn’t just a panic attack. It helped me get the ball rolling.’

David Walsh, the creator of the app that saved Mr Green’s life, said he was ‘humbled’ to have played a part, adding the outcome was ‘absolutely wonderful’. 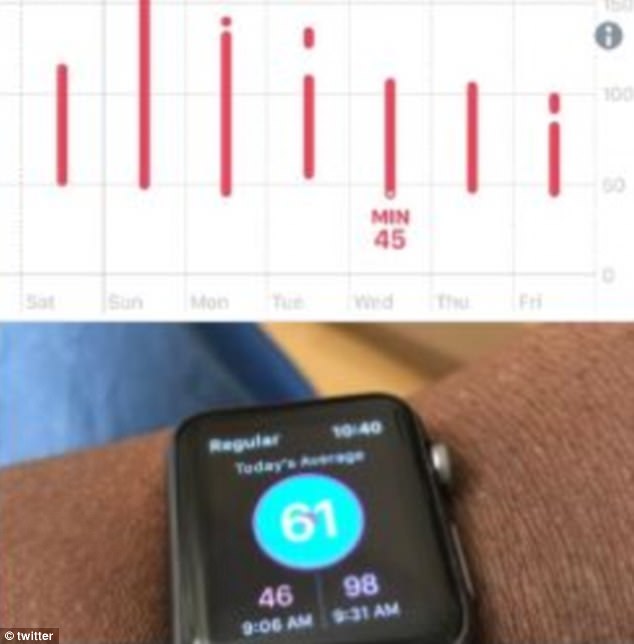 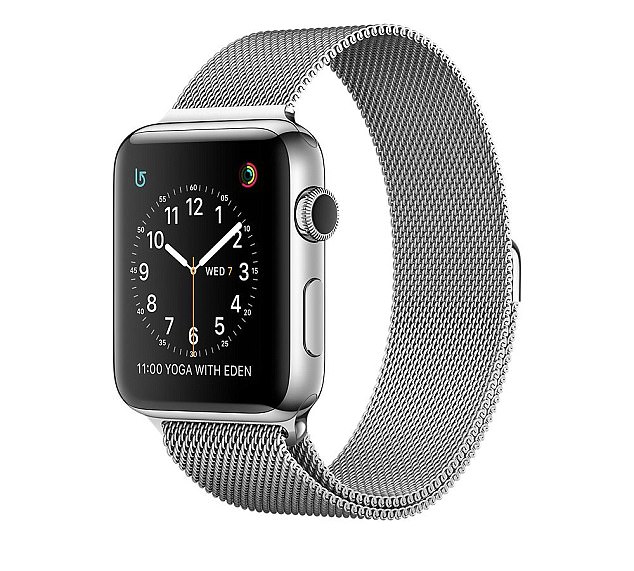 Mr Green’s claims follow a string of similar incidents in recent years, as the trendy device has soared in popularity and made Apple billions of pounds

He told the newspaper:  ‘The stories I hear about how the app and the Apple Watch have changed people’s lives and sometimes saved their lives are truly heartwarming.’

CAN APPLE WATCHES SAVE YOUR LIFE?

The Apple Watch has been found to detect a heart condition that affects some 2.7 million people in the US, a study in May revealed.

By pairing the smartwatch’s heart rate sensors with artificial intelligence, researchers developed an algorithm capable of distinguishing an irregular heartbeat, known as atrial fibrillation, from a normal heart rhythm – and with 97 percent accuracy.

Atrial fibrillation, although easily treatable, has been difficult to diagnose and the team believes their work could pave the way for new methods to identify the abnormality.

The research was conducted by the University of California, San Francisco, in collaboration with the app Cardiogram, which tracks an individual’s sleep, stress and fitness via the Apple Watch’s built-in hear rate sensor.

Mr Green’s claims follow a string of similar incidents in recent years, as the trendy device has soared in popularity and made Apple billions of pounds.

Scott Thomas, 51, from Rhos-on-Sea in North Wales, claimed last year that the heart rate monitor on his timepiece may have lead to life-saving treatment.

Dennis Anselmo, 62, of Morinville, Alberta, also credited the device for spotting a bizarre spike in his heart rate.

In another case, a 22-year-old man, from Maryland, said the Apple Watch’s SOS feature allowed him to call for help after he was crushed in a car crash.

The Apple Watch uses LED light technology to read the wearer’s heart rate and then measurements are recorded in the health app.

Users of the gadget are recommended to wear the timepiece quite tight so that an accurate reading can be taken.

Researchers at the University of California, San Francisco, showed in May that the Apple Watch can detect atrial fibrillation, or an irregular heartbeat.

It was noted to have a 97 percent accuracy for spotting the common condition, which is known to trigger potentially fatal strokes.

Soaring sales appear to have made Apple the second largest watch maker in the world behind Swiss giant Swatch – the owner of Omega.

Analysts said in May that the tech giant was raking in sales of around £4.5billion a year from watches and other wearable products.