It has been hailed by Apple Boss Tim Cook as ‘huge’, and by analysts as ‘the most important thing Apple has done since the app store’.

When the firm’s new iOS 11 update is made available in the next few weeks, it will include a radical new technology that could change the way we use technology.

Augmented reality allows users to look through their phone and see digital items from a Pokemon to a piece of Ikea furniture superimposed on the real world as if they were really there.

One of the first apps for Apple’s new augmented reality platform is a virtual version of the Very Hungry Caterpillar that puts the much loved character in a  child’s living room,  allowing  them to feed and play with it until it transforms into a butterfly

Apple’s Augmented reality system uses the cameras on an iPhone to detect a flat surface, or ‘plane’ to put the virtual objects on, such as a table or floor.

With a combination of machine learning and the camera data, it can constantly adjust the image so the object appears secured to the correct surface without the ‘jitters’ or other AR systems.

ARKit also makes use of the camera sensor to estimate the total amount of light available in a scene and applies the correct amount of lighting to virtual objects.

While previous attempts at the technology have struggled to make it work effectively, Apple’s system, known as ARKit, lets developers place their virtual items anywhere.

‘This is one of those huge things that we’ll look back at and marvel on the start of it,’ Apple CEO Tim Cook told analysts earlier this year.

Many of them agree.

‘This is the most important platform that Apple has created since the app store in 2008,’ said Jan Dawson of Jackdaw Research.

With the release of iOS 11, it will bring AR to about 300 million Apple devices that are already in people’s hands.

Although the technology was only revealed a few weeks ago, the first apps using it have been shown off.

Dailymail.com was able to see the first apps for the system, developed by big names such as IKEA and AMC. 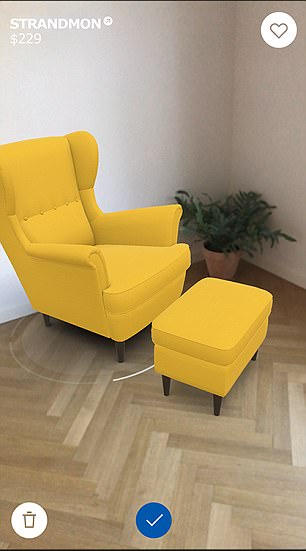 If you’ve ever wondered if that sofa will really fit in your living room, then AR could be a godsend.

Ikea’s first AR app, called Ikea Place, lets you put any item, from sofas and lamps, to rugs and tables into your living room to see how they look.

It sounds like a gimmick, but in practice its astonishingly good.

‘The app lets you virtually ‘place’ home products that are 3-D and true to-scale so you can make sure they’re just the right size, design and functionality for your room,’ Ikea says, and it really works.

A sofa placed into the room we were sitting in appeared at the perfect size, on the floor just as it should be.

You’re able to walk right up to it to see the fabric up close, and even look underneath.

It’s also possible to see several version of the same item – for instance, in one demonstration we saw a sofa bed as both sofa and bed.

‘Everything is going to change with ARkit,’ said Michael Valdsgaard, Leader Digital Transformation at IKEA.

‘Everything we know about how we live, how we shop is going to change with ARKit.

The app looks at the room to measure it, which allows it to place furniture anywhere in the room.

‘This might be the future place you’ll be shopping,’ Valdsgaard said. 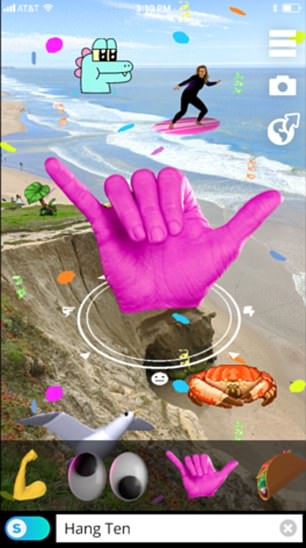 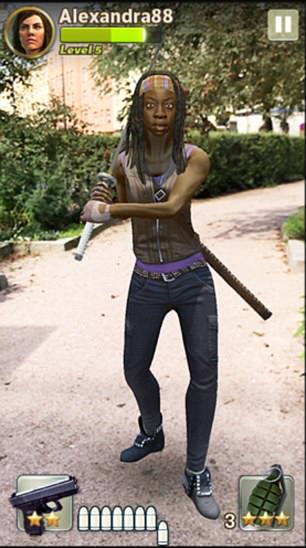 The GIPHY World app, left, allows you to place gifs in the real world, while the Walking Dead’s game lets zombies chase you through your own living room

The Walking Dead: Our World

This upcoming location-based augmented reality mobile game from Next Games and AMC brings the zombie apocalypse into our familiar surroundings more realistically than ever before.

Players can fight walkers wherever they are: streets, parks, living rooms and backyards.

But players won’t face the apocalypse alone; Rick, Daryl, Michonne and more iconic characters from the hit TV show will fight by their sides.

ARE APPLE AR GLASSES NEXT?

If the new software wins over more AR fans as Apple hopes, analysts say that Apple will begin building AR-specific devices, too.

One obvious possibility might be some kind of AR glasses tethered to the iPhone, which would allow people to observe digital reality without having to look “through” a phone.

Once technology allows, a standalone headset could render the iPhone unnecessary, at least for many applications.

One recent patent application shows glasses with a touchscreen built in. 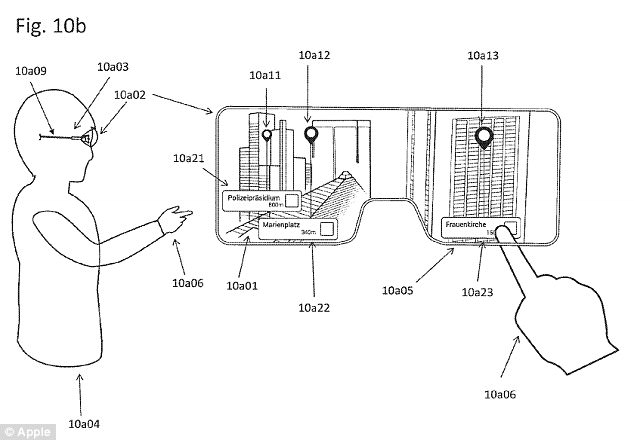 Rumors that the company is planning to ‘bring the technology to the masses’ with iPhone apps and affordable smart glasses have been swirling since March, and now a patent application shows the company is serious about AR

Such a device could ultimately supplant the iPhone, although that isn’t likely to happen for five to 10 years, even by the most optimistic estimates.

Eric Carle’s much-loved character, The Very Hungry Caterpillar, has won the hearts of millions of children globally for over 45 years, and now it can take over your living room.

‘We decided instead to immerse the child in an interactive world, creating a digital virtual pet Caterpillar  the child can nurture.

‘We’ve found kids love this experience, with ARKit we can make this pet real’

At Apple, the introduction of AR gets underway in September with the release of iOS 11, the next version of the operating system that powers hundreds of millions of iPhones and iPads around the world

Tucked away in that release is an AR toolkit intended to help software developers create new AR apps.

Those apps, however, won’t work on just any Apple device – only the iPhone 6S and later models, including the hotly anticipated next-generation iPhone that Apple will release this fall.

Apple isn’t the only company betting big on AR. Facebook founder Mark Zuckerberg talked up the technology at a company presentation in April, calling it a ‘really important technology that changes how we use our phones.’

Apple rivals such as Google and Microsoft are also starting to deploy AR systems, while Snapchat and Facebook are both believed to be working on AR glasses.

Arise is a brand new AR puzzle game for the iPhone and iPad, and really shows off how game makers can think differently, to use an Apple phrase, about how AR games are controlled.

Line of sight and perspective are your only controls to help the game’s hero get to the top of the sky island and retrieve an artifact. 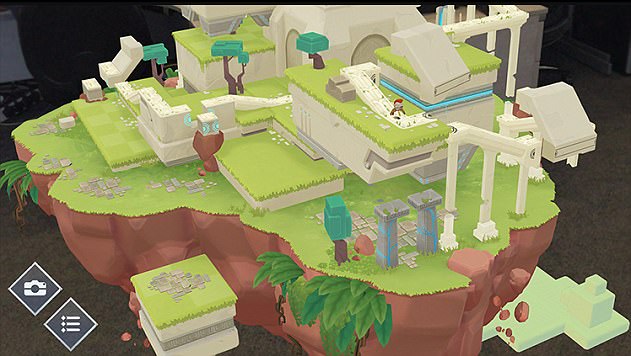 Line of sight and perspective are your only controls to help the game’s hero get to the top of the sky island and retrieve an artifact.

Playing the game involves moving around the room an awful lot to line up the puzzles.

It’s a slight shock to see the islands that form levels appear on a coffee table, and the game world looks astonishingly real through the screen of an iPad.

‘There are no control inputs other than using the device to line things up,’ Simon Gardner, CEO at Climax Studios said.

He said the Apple move is a tipping point for the technology.

The instant installed base ins incredible.

‘Overnight, there will be hundreds of millions of devices that will run this stuff. It’s very exciting’. 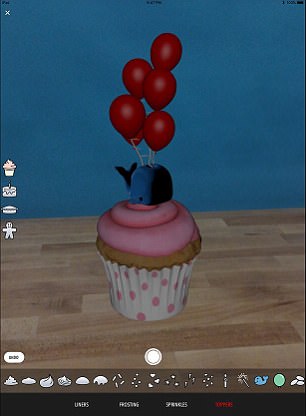 The Food Network is developing a range of apps for augmented reality, and showed off a cupcake maker allowing people to virtually design their cakes, then see the recipe and ingredient list they need – s well as being able to send the virtual cupcake to their friends.

GIPHY has created a special AR version of its app.

‘We wanted to release the GIFs into the real world,’ said Ralph Bishop, the firm’s Head of Design.

The app allows users to make the world their canvas and do more than just text messaging a GIF.

‘Now you can bundle and share whole scenes of GIFs like never before, making the world your canvas,’ it says.

Tim Merel, managing director of technology consulting firm Digi-Capital, believes Apple’s entry into AR will catalyze the field. His firm expects AR to mushroom into an $83 billion market by 2021, up from $1.2 billion last year.

That estimate assumes that Apple and its rivals will expand beyond AR software to high-tech glasses and other devices, such as Microsoft’s HoloLens headset.

For now, though, nothing appears better suited for interacting with AR than the smartphone. Google already makes AR software called Tango that debuted on one Lenovo smartphone last year and will be part of another high-end device from Asus this month.

But it will be years before Tango phones are as widely used as iPhones, or for that matter, iPads. Most of those devices are expected to become AR-ready when the free iOS 11 update hits next month.

Nearly 90 percent of Apple devices powered by iOS typically install the new software version when it comes out.

Assuming that pattern holds true this fall, that will bring AR to about 300 million Apple devices that are already in people’s hands.