Apple’s iPhone launch: What to expect from today’s event

Following months of anticipation, rumours and leaks, Apple will today unveil its latest iPhone at its new ‘spaceship’ campus in Cupertino.

The launch event, which takes place at 1pm ET (6pm BST), will introduce a completely redesigned top-of-the-line iPhone, rumoured to be called the iPhone X.

At $1,000, it could also cost twice what the original iPhone did setting a new price threshold for any smartphone intended to appeal to a mass market.

Apple will also launch two other new phones, which may be called the iPhone 8 and iPhone 8 Plus, alongside an upgrade to the Apple Watch and a higher-definition Apple TV.

MailOnline will be providing updates and hands-on reviews of the new devices live from Cupertino. Here’s what you can expect from the event.

The iPhone X is the most important phone created by Apple to date and is set to be revealed during an event at the company’s new headquarters in California today. Pictured is what the new phone reportedly looks like

– Upgrades to iTunes and Apple Music

Apple’s headline act for today’s event will be the launch of three new iPhone models to celebrate the 10-year anniversary of the popular smartphone.

Following Apple’s naming pattern since 2009, the new models should be called the 7S and 7S Plus, but Apple has opted to skip this step, rumours suggest.

It will instead release an iPhone 8 and 8 Plus as upgrades over last year’s models.

The third of Apple’s new phones will be the $1,000 iPhone X or iPhone Edition smartphone, which will come with wireless charging and no home button. 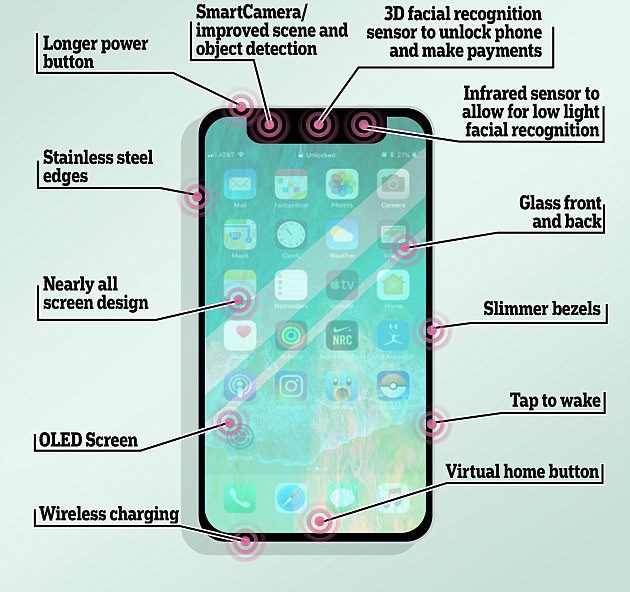 Various leaks have indicated the new phone will feature a sharper display, a so-called OLED screen that will extend from edge to edge of the device, thus eliminating the exterior gap, or ‘bezel,’ that currently surrounds most phone screens

Instead of the home button, the flagship device will likely work via gesture and voice control.

On Friday, what’s believed to be the finalized version of iOS 11 was leaked, detailing several features of the phone and a look at the latest edition of the Apple Watch.

Developer Steve Troughton-Smith released new information related the official names of the devices that will be announced on Tuesday. 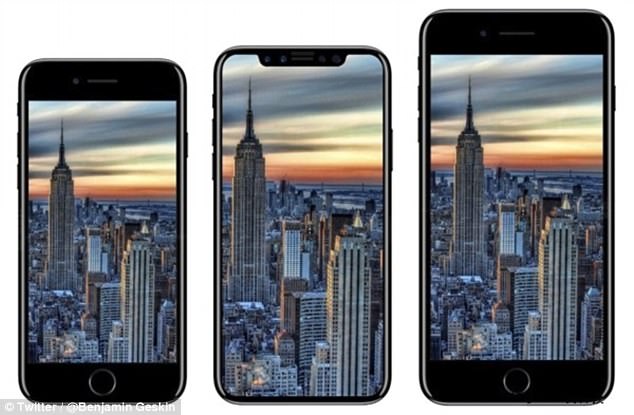 Apple hasn’t confirmed what it will be announcing, though a financial forecast issued last month telegraphed something significant in the pipeline.  Pictured above center is what the new phone reportedly will look like

HOW TO WATCH THE EVENT

To watch online, you can stream the launch event live from Apple’s website.

Apple does not allow its events to be streamed using the Chrome or Firefox web browsers.

You’ll need to use the Safari browser on Mac, iPhone, or iPad or the Microsoft Edge browser on PC.

You can also download the Apple Events app for Apple TV to see the stream there.

Mr Troughton-Smith also discovered a ‘tap to wake’ feature, that would allow users to double-tap their screen to wake their device.

The power button at the top of the device will also be larger, according to the iOS GM code, and will feature a new functionality in which users can double press it to activate Apple Pay.

And a new ‘dynamic status bar’ will be added, as revealed in the iOS 11 GM code.

Animations will feature in the bar at the top bezel of the phone, including charging and ‘double height’ expansion, as well as detailed information on location, calls and recording.

‘This year’s September event is easily the most anticipated iPhone launch given expectations for the first major form factor change since the iPhone 6 cycle and excitement surrounding a host of revolutionary features/capabilities alongside evolutionary updates,’ RBC Capital Markets analyst Amit Daryanani said in a note to investors. 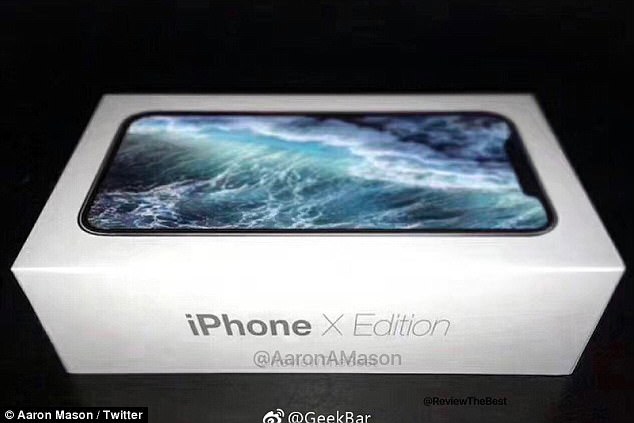 Apple’s tenth anniversary iPhone will be called the iPhone X according to several sources including Dutch tech site iCulture. Pictured is a mock up of the case posted on Twitter by Senior Editor of The iPhone Insider Aaron Mason

Apple unveiled the latest version of its Apple Watch a year ago, which included some minor upgrades to its first model, released in April 2015.

In August, leaks revealed that the newest version will come with an LTE, or 4G, modem for wireless data.

This means users will not have to connect the device to an iPhone to take full advantage of its features.

Few other details of the Apple Watch have surfaced, but Apple did buy sleep-tracking company Beddit in May, meaning it could allow users to wear the watch overnight as well as during the day.

Apple does not say how many Apple Watches it sells. Gene Munster, a veteran Apple watcher and analyst with Loup Ventures, believes the watch could double or even triple in sales because of the new connectivity. 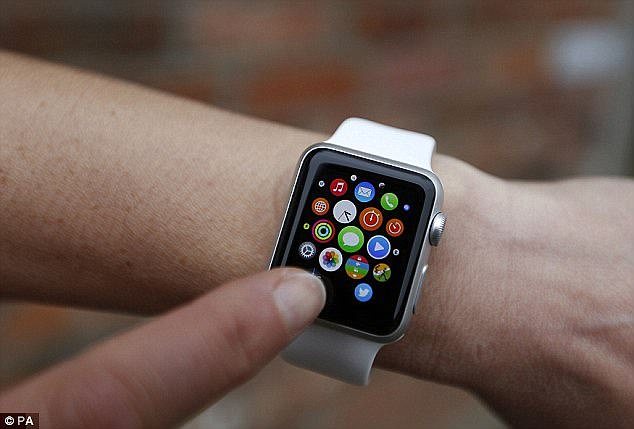 Apple does not say how many Apple Watches it sells. Gene Munster, a veteran Apple watcher and analyst with Loup Ventures, believes the watch could double or even triple in sales because of the new connectivity. Pictured is the ‘Sport’ version of the latest Apple Watch

Apple will finally update its Apple TV top box after nearly two years, upgrading it up to 4K streaming standards.

The new set-top box model will come with High Dynamic Range (HDR) video and will reportedly have a quicker processor to handle 4K streaming.

The firm’s last update to the device added a new app store, Siri search, and remote.

But even with these updates box, the Apple TV is still behind its competitors for streaming devices in the US. 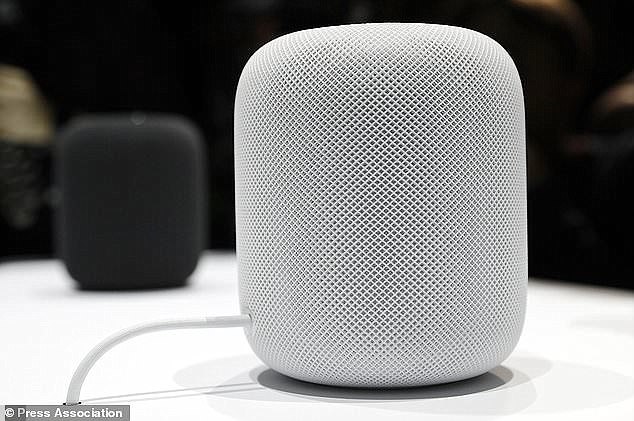 In June, Apple unveiled its HomePod, a wireless home speaker powered by Siri that is expected to take on Amazon’s Echo line and Google Home.  HomePod will likely launch in December, with Apple expected to confirm an official date at today’s event

FEATURES REVEALED IN THE HOMEPOD CODE

Because the HomePod speaker will have to work with Apple’s new phone, it contains references to some of the upcoming features in its code.

– Removal of the home button

– Facial expression detection, which may be used for Apple Pay

In June, Apple unveiled its HomePod, a wireless home speaker powered by Siri that is expected to take on Amazon’s Echo line and Google Home.

The $349 (£265) voice-controlled speaker is capable of controlling smart appliances, fetching content from the internet and more.

HomePod is designed to work with the Apple Music subscription service and can produce rich sound while tapping into the artificial intelligence power of Siri.

‘It’s so cool, we really believe it is going to take your home music experience to the next level,’ Apple chief executive Tim Cook said of the new device.

While Apple unveiled everything consumers needed to know about the speakers in June, the company has not confirmed an official release date.

HomePod will likely launch in December, with Apple expected to confirm an official date at today’s event. 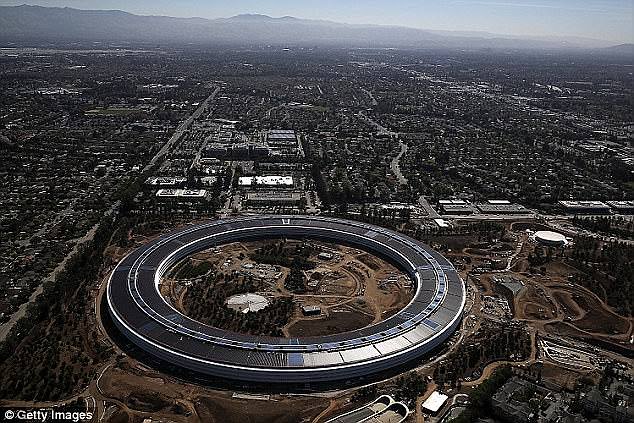 Apple is expected to unveil a dramatically redesigned iPhone at the first product event it’s holding at its new spaceship-like headquarters (pictured) in Cupertino, California

At its June developer conference, Apple previewed its latest operating system, iOS 11, for iPhones and iPads, watchOS 4 for Apple Watches, and macOS High Sierra for Macs.

But the company often release extra information and details at its annual September events.

The firm will likely unveil when each new operating system will be available at today’s event, as well as extra details about High Sierra, which Apple has kept relatively quiet about until now.

Updates to a number of Apple services, such as Apple Music and iTunes, will likely also be discussed. 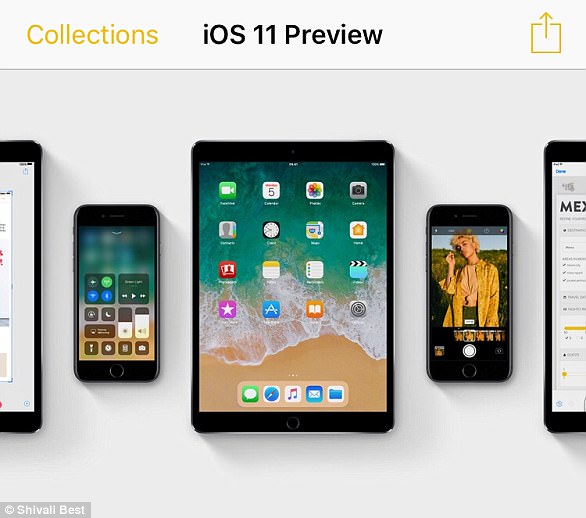 Features include a ‘Do Not Disturb while Driving’ function, and the ability to see what your friends are listening to in Music. Pictured are what iOS 11 will look like on iPhones and iPads

– New ‘Files’ app for all documents, including those from third-party apps

– Map updates, including a ‘Do not disturb while driving mode’

– Ability to see what friends are listening to on Apple Music

Apple unveiled the new iMac Pro at its June developer conference, and today the company is rumoured to give more details on the device.

Apple also introduced updates to its iMacs, as well as the MacBook and MacBook Pro lines, over the summer.

The company has not updated its Mac Pro and Mac Mini machines in a long while, leading to some suggesting these lines could be upgraded today.

Apple said in April that it was working on a version of the Mac Pro, but that it would not be released this year, and the firm could preview the device today. 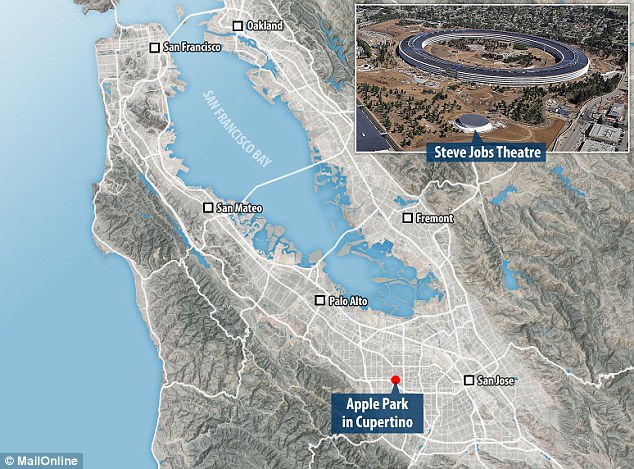 Following months of anticipation, rumours and leaks, Apple will today unveil its latest iPhone at the Steve Jobs Theatre at its new ‘spaceship’ campus in Cupertino

KEY FEATURES OF THE SPACESHIP-LIKE CAMPUS

Appearing as a giant saucer, the Silicon Valley site near the 280 Highway will be home to 13,000 Apple employees.

It features jogging and cycling trails, with more than a thousand bikes kept on site at all times, which staff can use to make their way around.

The Spaceship has 360-degree curved glass fronted walls and central courtyard as well as a 1,000-seater auditorium, a gym and 300,000 square feet of ‘research’ space.

Apple Campus 2 also has underground parking hidden from view, meaning 80 per cent of the site can be covered in trees. The site was previously owned by Hewlett Packard and the majority of the area is currently covered in asphalt.

Elsewhere underground, the auditorium will be where Apple’s CEO Tim Cook will present the companies keynotes ahead of product launches, for example.

This auditorium is covered with a circular glass pavilion that will also be an access point for employees and guests.

Natural gas, primarily, provides the building’s power and the local energy grid will only be accessed in emergencies.

The glass structure is also fitted with solar panels.

The circular, four-storey building is around a mile in circumference and a third of a mile wide and was recently described by the San Fransisco Weekly as a ‘massive glass doughnut’.

The building stays eco-friendly with natural ventilation that works instead of air-conditioning for 70 per cent of the year, low energy LED lighting where natural light doesn’t reach, and on-site recycling.