Apprentice electrician gets on the property ladder aged just 18

A teenager has revealed how he bought his dream home at the age of just 18.

Aaron Thompson and his girlfriend Jessica outside their new build three-bedroom home in Lutterworth, Leicestershire

Aaron’s tips for getting on the property ladder

Aaron Thompson has urged other potential homeowners ‘not to be scared’ and to take the plunge when considering buying a home.

Here are his top tips:

Aaron told the Leicester Mercury: ‘I earn bog standard money. I still have a gym membership, a phone contract, I still go out with my friends. They say buying a house is a really big thing, but it’s not as big as you expect.’

2) Spend on the important things

Aaron suggests investing money on large items of furniture including a sofa and a bed. But he urges people to go to Ikea for items including cutlery and cushions.

‘The number one thing I would say is don’t get a glass dining table. Everytime you sit down at that dining room table it has stuff on it and you need to wipe it down.’

He warns others not to rush into it if they are not ready to move out of home or in a stable relationship with their partner.

5) Use the Help to Buy scheme

He said despite earning ‘bog standard money’ in his job as a trainee electrician as well as keeping his gym membership and phone contract and going out with friends, he was able to get a foot on the property ladder.

Mr Thompson, who is originally from Essex, is an apprentice electrician by trade and a part-time racing driver, which he hopes will become his full-time profession.

According to Indeed, the average salary for an Apprentice Electrician is £16,057 per year in England, which meets the national average.

Aaron said: ‘I got with my girlfriend when I was 15.

‘She lived in Lutterworth, it was a lot of travelling back and forth.

‘I got to the point one day when I thought I am not going to do this anymore.

‘I was never going to break up with Jess, I just thought sod it I’ll buy a house.

‘I saved up as much as I could, and thanks to the help to buy scheme we managed to make it possible.

‘When I left school I wasn’t the most academic of people and I always knew I wasn’t going to go to university or do A Levels.

‘I am not wasteful, it’s my money. I know for a fact if I am going to be a race driver or a tradesman I need some sort of pension.

‘It’s not just a family thing for me, it’s an investment.

‘It’s hard for me to say how long I have been saving for.’ 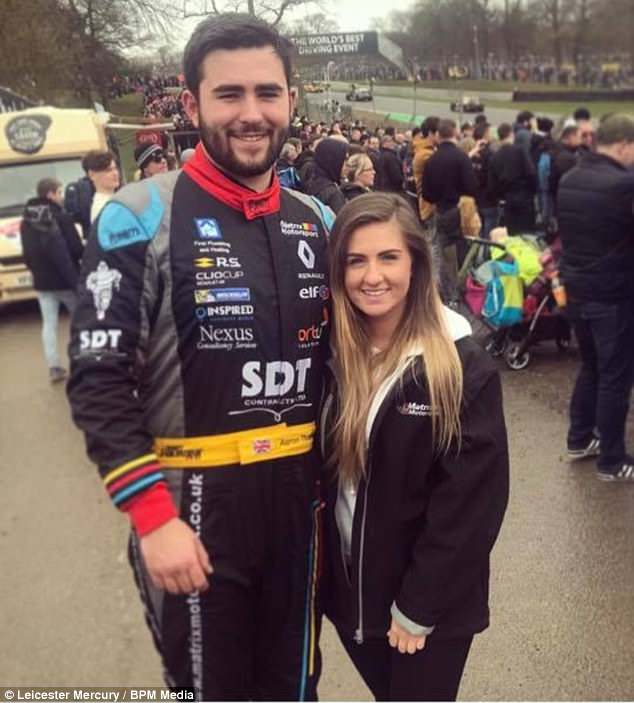 Aaron with his girlfriend Jessica King, 21, who he met through his job as a racing driver

What is the Help to Buy scheme?

Under Help to Buy, borrowers are given a loan of up to 20 per cent of the value of a newly-built home or 40 per cent in London by the Government.

The buyer is then able to get a mortgage with just a 5 per cent deposit.

The loans are interest free for five years. After this interest is charged at a rate of 1.75 per cent of the loan — in addition to their mortgage repayments.

He added: ‘I was living with my parents and putting stuff away. I was leaving myself £70 a week to spend.

‘Even now I am still budgeting myself £100 a week. If I want to take Jess out for a meal, buy a new pair of trainers or anything like that it has to come out of that.’

Aaron and Jessica bought the three-bedroom home on the Davidsons Homes’ Royal Park development in Lutterworth.

He added: ‘Davidsons have helped out a massive amount. I am telling you now

I will not buy a house off another builder. We got the quality and so much support.

‘It’s not like here’s your keys now you are on your own. You fully feel looked after.

‘Being an 18 and 20 year old sitting down buying a house it’s all a bit daunting but they helped so much.’