Apprentice jockey Hannah Fitzgerald, 18, is in a come after a fall from a horse in Kalgoorlie

Young jockey, 18, is in a COMA in hospital after a horror fall from a horse named Neurologic after a race – making the rest of the competitors too distraught to continue the carnival

A teenage jockey is in a coma after falling from a horse named Neurologic at the end of a race.

She was unconscious for some time before being rushed to Kalgoorlie Regional Hospital where she was stabilised, and was eventually flown to a hospital in Perth.

The final event was abandoned because other jockeys were too distraught after witnessing the horror fall.

Hannah Fitzgerald (pictured), 18, is in a coma after falling from a horse after a race on Saturday night

In October 2020, she was presented with the Trainee of the Year Award at the Apprentice Awards.

Just 10 days after her riding debut on Duck Feet, she won on Jupiters Sun for trainer Glen Cortes at a carnival in Carnarvon, north of Perth. 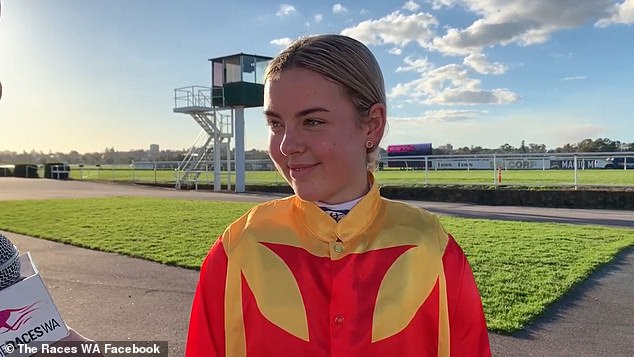 The young woman previously told The Races WA that becoming a jockey had exceeded her expectations.

‘I’m enjoying it a lot and it’s more than I expected it to be,’ she said.

‘I’m improving as I go along, and it gets better every day.’