Could Queen Nefertiti’s true beauty about to be revealed? Archaeologists claim to have discovered the Egyptian ruler’s mummy as it awaits DNA test

Two mummies lying in the Valley of Kings could be the remains of Nefertiti and Ankhesenamun, the wife of Tutankhamun, with DNA tests expected to confirm whether or not the remains are the Ancient Egyptian queens.

Over 3,000 years ago, Pharaoh Akhenaten and Queen Nefertiti decided to abandon worship of the Egyptian gods in favour of what the Pharaoh called the one true God — rejecting a millennia of tradition.

His son, Tutankhamun — the last of his royal family to rule — turned against his father and restored the pantheon of Egyptian gods.

But after they were both dead, the high priests destroyed monotheist monuments created by Akhenaten and struck both of their names from their record, banishing the two Pharaohs from the history books.

The revenge of the high priests obscured a rich history that was only fully appreciated upon the discovery of Tutankhamun’s tomb in 1922, with the censorship ironically making him the most famous of the Pharaohs.

Now, thousands of years after the end of Egypt’s 18th dynasty, the Queens who ruled alongside both Akhenaten and Tutankhamun — may have been found.

The Nefertiti bust at the Neues Museum in berlin is pictured. Nefertiti ruled Egypt between 1370 to 1330 BC alongside the Pharaoh Akhenaten, and is considered as one of the most important 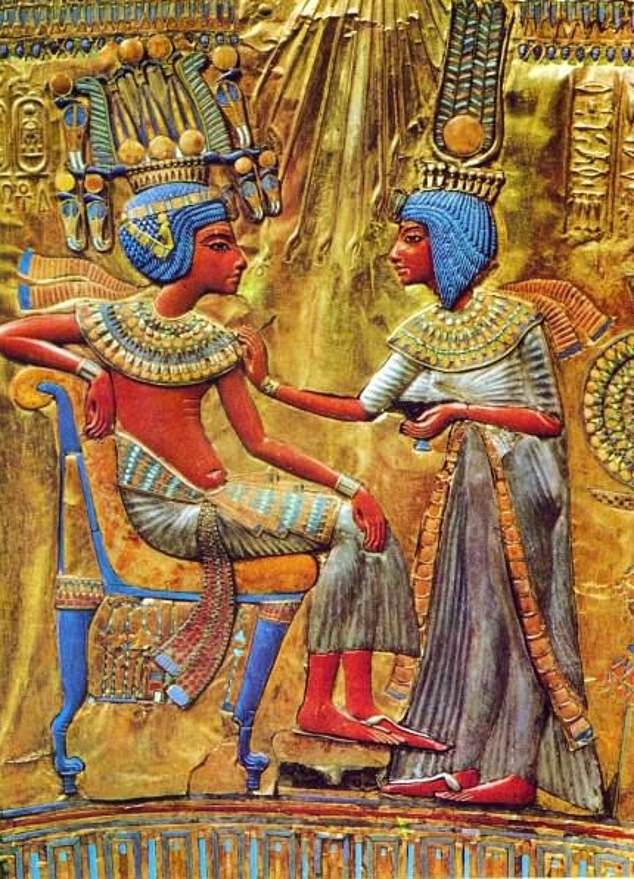 Images of Tutankhamun and Queen Ankhesenamun, who was said to be beautiful, are shown 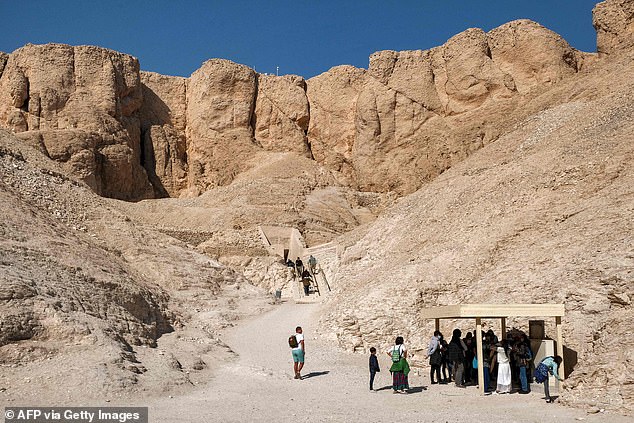 A guide briefs tourists outside KV35, the Tomb of Amenhotep II, at the Valley of the Kings on the West Bank of the Nile river

Nefertiti ruled Egypt between 1370 to 1330 BC alongside the Pharaoh Akhenaten.

His predecessor, Amenhotep III ruled over a land whose priesthood, centered on the god Amun, had been steadily growing in power for centuries.

By the time Akhenaten came to power, the priests of Amun were on almost equal standing with the royal house in terms of wealth and influence.

In either the 9th or the 5th year of his reign, Akhenaten outlawed the old pantheon, closed the temples, and proclaimed himself the living incarnation of a single, all-powerful, deity known as Aten.

Subsequent rulers, along with the high priests, decided to destroy all written recordings of Akhenaten – refered to only as ‘the enemy’.

Akhenaten’s name was lost to history until the 19th century CE when the Rosetta Stone was deciphered by Jean-Francois Champollion in 1824.

The mummified remains of Nefertiti, perhaps the most famous Great Royal Wife of ancient Egypt, are thought to be stored in tombs KV21 and KV35, in the Valley of the Kings.

Two of the most important women in Egyptian history could be brought to life if DNA evidence confirms their identities.

CT scans could be used to replicate the facial features of the two queens, scholars have said.

‘In October we will be able to announce the discovery of the mummy of Ankhesenamun, Tutankhamun’s wife, and her mother, Nefertiti,’ Prof Hawass told Newsweek.

‘I am sure that I will reveal which of the two unnamed mummies could be Nefertiti.’

Finding mummies of perhaps the two most revered queens in ancient history has been the dream of many an Egyptologist.

But archeologists have ‘barely found 30 per cent of everything that is underground,’ Hawass said.

‘Modern Egypt is built on the Ancient. And that is why the heritage that remains hidden is immense.’

Nefertiti ruled over what some scholars say was the wealthiest period of ancient Egypt, where the empire flourished.

There is debate over whether Nefertiti ruled in her own right after the death of Akhenaten for a short period before Tutankhamun ascended.

Much of her role in the tumultuous period of Egyptian history is still unknown to us, but DNA tests confirming her identity could open the door to further discoveries.

The bust of Nefertiti was found in Egypt in 1912 at Tell el-Amarna, the short-lived capital of Akhenaten. It is now housed in Berlin’s Neues Museum.

Archaeologist Giovanni Belzoni speculated that he had found Nefertiti in 1817 while excavating tomb KV21 in the Valley of the Kings, but later DNA testing has proven inconclusive.

Now, modern Egyptologists may be on the cusp of finally identifying her remains. 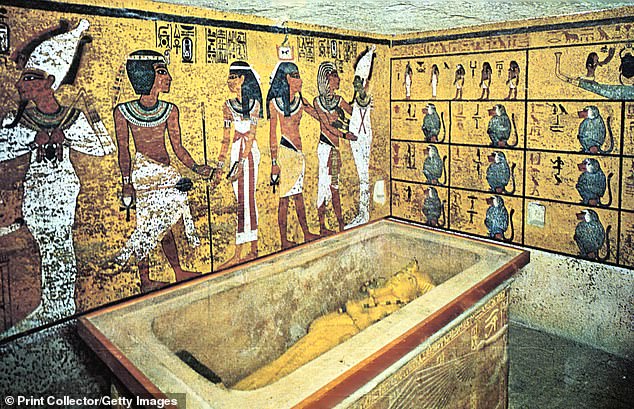 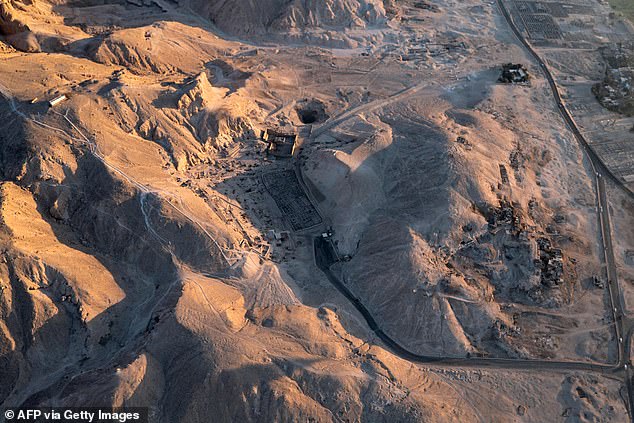 An aerial view of the ancient Egyptian workmen’s village of Deir al-Madina, home to artisans who worked on the tombs in the Valley of the Kings during the New Kingdom period of Ancient Egypt, is shown 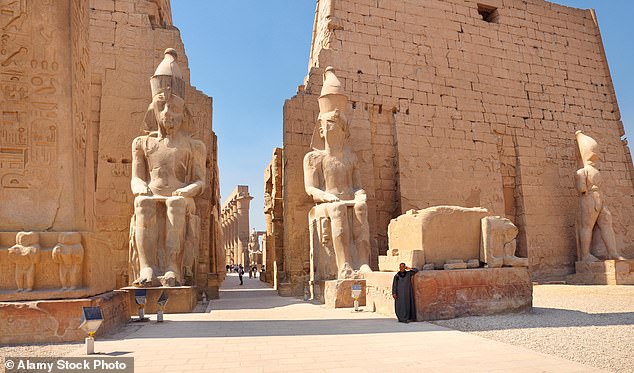 Colossi of Ramses II at the entrance to Luxor Temple, located on the east bank of the Nile River

WHO WAS QUEEN NEFERTITI? 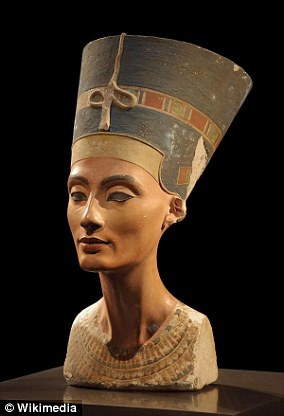 Queen Nefertit was one of ancient Egypt’s most influential Queens, ruling during the empire’s prosperous 18th Dynasty.

Nefertit, who ruled Egypt 3,300 years ago from 1353 to 1336 BC, was either the mother or stepmother of the boy-pharaoh King Tutankhamun.

Her full name, Neferneferuaten Nefertiti, means ‘Beautiful are the Beauties of Aten, the Beautiful One has come’.

Her power and charms in 14th-century BC Egypt were so great that she collected many nicknames, too – from Lady Of All Women, to Great Of Praises, to Sweet Of Love.

Nefertiti lived during the richest period in ancient Egypt’s history – from around 1370BC to 1330BC.

As well as marrying a king – Pharaoh Akhenaten – she was probably born the daughter of another pharaoh, and possibly ruled alongside Tutankhamun. 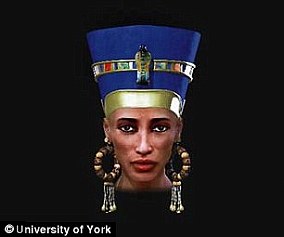 Pictured is a reconstruction of Queen Nefertiti’s face

Nefertiti and Akhenaten had six daughters, although it is thought that Tutankhamun was not her son.

DNA analysis has indicated that Akhenaten fathered Tutankhamun with one of his own sisters – making Nefertiti his step mother.

Her beauty and power were depicted in a number of temple images.

Sometimes she is shown walking behind her husband, but is also often shown on her own, in positions of pharaoh-like power.

Nefertiti is thought to have lost her husband around 1336BC, after which she may have reigned over Egypt alone.

Her own death is shrouded in mystery. She is thought to have died about six years after her husband, possibly from the plague that struck Egypt at that time.

In 1331BC, Tutankhaten changed his name to Tutankhamun and moved the Egyptian capital to Thebes, where he died in 1323BC.