Archaeopteryx was missing link between dinosaurs and birds

A raven-sized creature that lived in southern Germany 150 million years ago really was the ‘missing link’ between dinosaurs and birds, according to new research.

And the iconic Archaeopteryx could have evolved into several different types of species on the tiny islands that dotted the primordial Mediterranean.

This would have been a Jurassic version of ‘Darwin’s finches’ – with distinctive varieties of that bird emerging on the Galápagos Islands.

This is the geologically oldest, but most recently discovered specimen of Archaeopteryx. It lived some 150 million years ago in what is now Northern Bavaria and inhabited what was then a subtropical environment characterized by reef islands and lagoons

Archaeopteryx has been at the centre of a debate ever since it was first discovered more than 150 years ago.

Some scientists insist it was just another feathered dinosaur and others say it was the first bird.

Now an analysis of the oldest and most complete specimen ever found has shed fresh light on the enigmatic animal – and found it was somewhere in between.

The discovery in what is now Northern Bavaria adds to growing evidence dinosaurs actually did evolve into our feathered friends.

The latest fossil allowed palaeontologists to reliably distinguish Archaeopteryx from its closest relatives.

These include the most fearsome theropod dinosaurs such as T-Rex and Velociraptor – along with ‘basal’ birds’ near the bottom of the evolutionary chain.

Notably, it also exhibited features that were so far not known from the remains of the other ten that have so far been dug up.

Professor Oliver Rauhut, of Ludwig Maximilian University of Munich, said: ‘Among other things, they reveal Archaeopteryx was very similar to advanced predatory dinosaurs in many respects.’

All eleven Archaeopteryx fossils have been dug out of rocks along the Altmuhl River, a tributary of the Danube.

Weighing about 2lbs, it was roughly the size of the common raven and lived during the late Jurassic.

At the time, Europe was an archipelago and was much closer to the equator than it is today.

Dubbed the Solnhofener Archipelago, it would have had a fairly warm, dry climate, similar to Florida’s today.

The idyllic, subtropical environment was dotted with reef islands and lagoons set in a shallow sea that was part of the primordial Mediterranean.

Archaeopteryx had broad wings with rounded ends and a tail that was long for its body length, which was up to 20 inches in total.

It had flight and tail feathers, with fluffy body plumage that included well developed ‘trouser’ feathers on the legs, enabling it to fly.

It had jaws with sharp teeth and three fingers with ‘killing claws.’

A raven sized creature that lived in southern Germany 150 million years ago really was the ‘missing link’ between dinosaurs and birds, according to a new study by researchers at Ludwig Maximilian University.

Archaeopteryx has been at the centre of a debate ever since it was first discovered more than 150 years ago.

Some scientists insist the 150 million-year old creature was just another feathered dinosaur, but others say it was the first bird.

Now an analysis of the oldest and most complete specimen ever found has shed fresh light on the enigmatic animal – and found it was somewhere in between.

Scientists believe some of Archaeopteryx’s characteristics include: 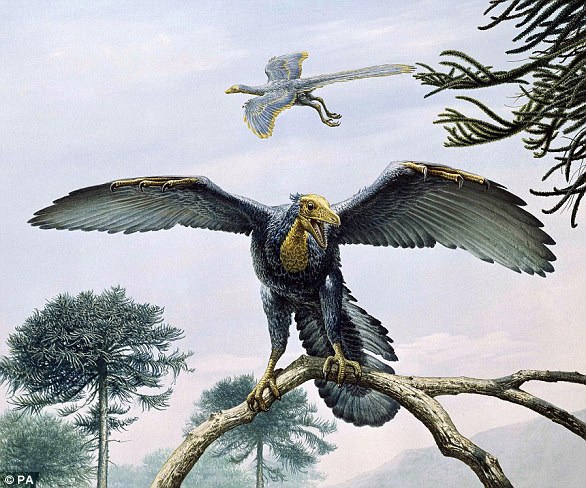 Artist’s impression of Archaeopteryx. A new analysis of the oldest and most complete specimen ever found has shed fresh light on the enigmatic animal – and found it was somewhere in between a dinosaur and a bird

The study published in PeerJ will provide a new ‘diagnostic key’ for differentiating bird like dinosaurs from their closest relatives.

This will be vital as a whole series of such predatory reptiles have been described in recent years, mainly from China.

It has greatly complicated the taxonomical classification of the group, explained Prof Rauhut.

The new fossil was unearthed in 2010, but it is the first time it has been extensively examined.

Analysis of the rock formation has confirmed it is the earliest known representative of the genus – and may have been one of several different species.

Prof Rauhut, who is also based at the Bavarian State Collections of Palaeontology and Geology in Munich, said: ‘Specimens of Archaeopteryx are now known from three distinct rock units, which together cover a period of approximately one million years.’

His investigation also demonstrated these span a remarkable range of anatomical differences. 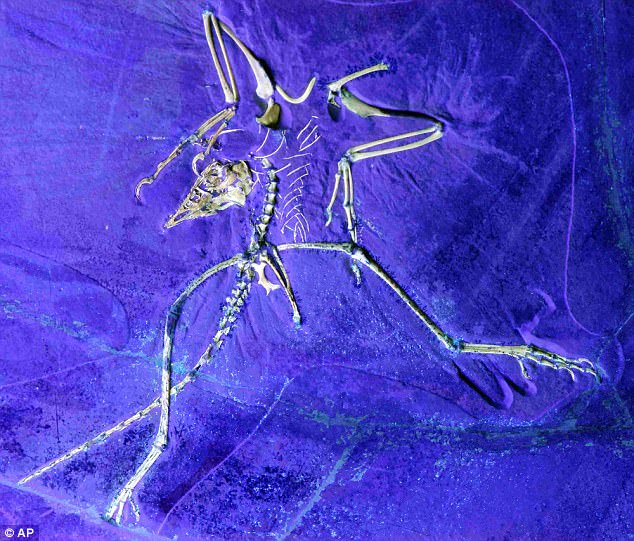 An ultraviolet-induced fluorescence photograph of an Archaeopteryx specimen shows the specimens preserved bone substance of the skeleton with wing and tail feather impressions of the tenth specimen of Archaeopteryx, in ventral view

Potential explanations for the wide variety could be down to different developmental forms involving members of a single species or evolution leading to the emergence of more than one.

Prof Rauhut said: ‘The high degree of variation in the teeth is particularly striking – none of the specimens shows the same pattern of dentition as any other, which could reflect differences in diet.’

He likened it to the finches discovered by Charles Darwin on the Galápagos Islands, where he found several species that varied from island to island.

This helped him to develop his theory of natural selection.

Added Prof Rauhut: ‘This is very reminiscent of the famous case of Darwin’s finches on the Galapagos, which show remarkable variation in their beak shapes.

‘It is even conceivable that this primeval bird genus might, in a similar fashion, have diversified into several specialised forms on the islands of the Solnhofener Archipelago.

‘In that case, the Archaeopteryx fossils could represent a species flock, a Jurassic analog of Darwin’s finches.’

It is the 12th fossil to be attributed to the genus but a study by Professor Rauhut’s group reported last year that the first of these – known as the Haarlem specimen discovered in 1861 – does not belong to the group.

This reduced the number of fossils to 11, although some doubts remain concerning the assignment of two of these. 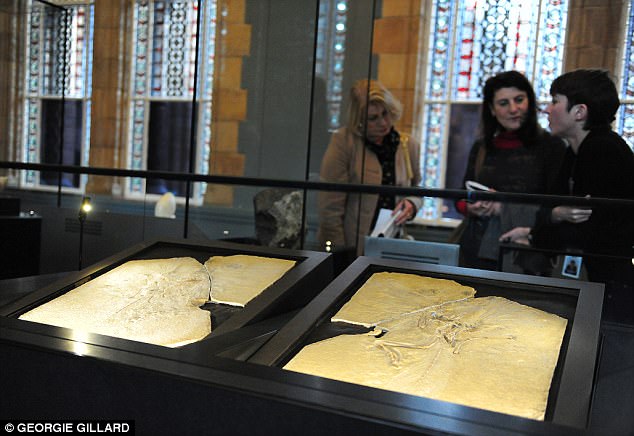 A 2012 exhibition at The Natural History Museum in London displayed 22 of the most valuable and extraordinary treasures in Britain today. Pictured is a specimen of Archaeopteryx lithographica, the most valuable fossil in the Museum. Around 147 million years old.

Prof Rauhut said this underlines the necessity for a diagnosis to clearly identify Archaeopteryx.

With its blend of avian and reptilian features, it was long viewed as the earliest known bird.

It is sometimes referred to as Urvogel, the German word for ‘original bird’ or ‘first bird.’

Based on its wings and feathers, scientists believe Archaeopteryx likely had some aerodynamic abilities.

Previous research has suggested its feathers were a light colour, possibly even white, with black tips.

It was a carnivore and may have eaten small reptiles, amphibians, mammals and insects.

It likely seized small prey with just its jaws, and may have used them to help pin larger prey. 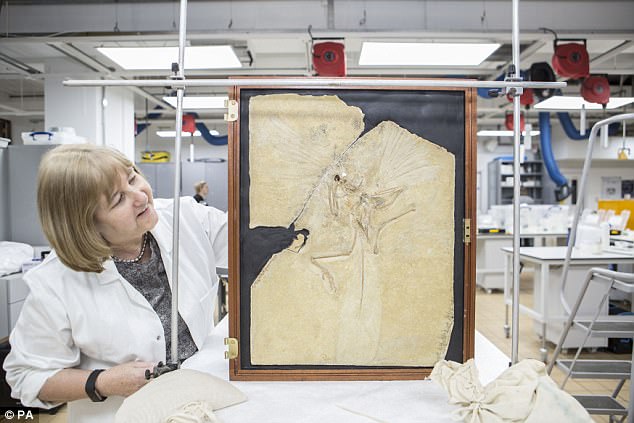 Conservator Lorraine Cornish with a ground-breaking Natural History Museum fossil Archaeopteryx on Wednesday March 8, 2017. The 147-million-year-old skeleton, encased in limestone, has left its London home to be displayed in an exhibition in Japan