The Archbishop of Canterbury has hailed Prince Philip as an ‘outstanding example of Christian service’ who was ‘a master of putting people at ease and making them feel special’.

Justin Welby joined other religious leaders including the Bishop of Dover, Rose Hudson-Wilkin, in paying tribute to the Duke of Edinburgh, following his death aged 99 yesterday.

His comments came as the British public defied public health advice to stay at home and continued to lay flowers for Philip during socially distanced vigils at royal palaces today.

The Archbishop said in a statement: ‘I join with the rest of the United Kingdom and the Commonwealth in mourning the loss of His Royal Highness Prince Philip, The Duke of Edinburgh, and give thanks to God for his extraordinary life of dedicated service.

‘Prince Philip continually demonstrated his unfailing support and unstinting loyalty to Her Majesty The Queen for 73 years.

‘He consistently put the interests of others ahead of his own and, in so doing, provided an outstanding example of Christian service.

‘During his naval career, in which he served with distinction in the Second World War, he won the respect of his peers as an outstanding officer.

‘On the occasions when I met him, I was always struck by his obvious joy at life, his enquiring mind and his ability to communicate to people from every background and walk of life.

‘He was a master at putting people at their ease and making them feel special.

‘The legacy he leaves is enormous. The Duke of Edinburgh’s Award, which he founded in 1956, has inspired generations of young people to help others and instilled in them a vision for citizenship and a desire to serve their communities.

‘His work with countless charities and organisations reflected his wide- ranging, global interests in topics including wildlife, sport, design, engineering and inter-faith dialogue.

‘In his powerful advocacy for conservation his was a prophetic voice for over half a century, as he brought people from around the world to a new concern and commitment to action for the future of our planet.

‘As we recover and rebuild after the terrible trial of the coronavirus pandemic, we will need fortitude and a deep sense of commitment to serving others.

‘Throughout his life Prince Philip displayed those qualities in abundance, and I pray that we can take inspiration from his example.

‘I also join many people in giving thanks for the marriage of Her Majesty the Queen and Prince Philip, and for their children, grandchildren and great-grandchildren.

‘Theirs was a marriage grounded in friendship and mutual respect and sustained by shared faith in Christ.

‘I pray that God will comfort Her Majesty and the rest of the Royal Family at this time. May His Royal Highness rest in peace and rise in glory.’

It comes as bouquets, flowers, cards, Union Flags and balloons were moved away by staff at palaces across the country this morning almost as soon as they were left.

But royal aides insist they will all be saved and looked at by the Royal Family inside the grounds of Windsor Castle and Buckingham Palace.

Palace security have even put up signs urging people not to congregate, but waves of mourners are still arriving to pay their respects to Her Majesty’s devoted husband, who dedicated his life to public service and supporting her through their 73-year marriage. 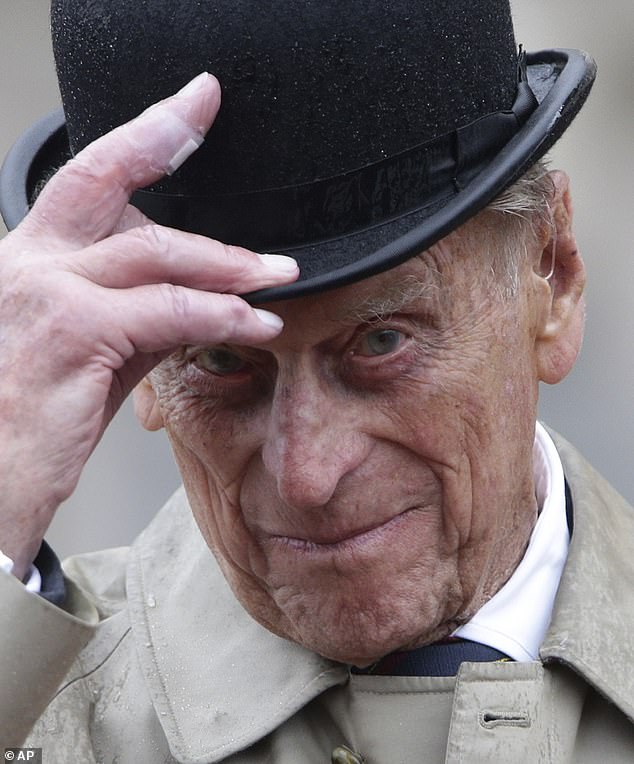 Well-wishers, all respecting social distancing and wearing masks, laid their tributes and briefly stood to pay their respects, with some wiping away tears or quietly singing hymns before returning home.

The Duke of Edinburgh’s coffin is at Windsor, where the Queen is in residence, in Her Majesty’s private chapel of worship, before being moved to the nearby Albert Memorial Chapel today, where he will rest over the weekend.

He is expected to be in the Royal Vault during his private family funeral at St George’s Chapel next Saturday, and will remain there until the Queen dies and they are buried together in the memorial chapel in a hugely scaled back event due to Britain’s ongoing lockdown, with only 30 relatives able to attend.

Britons are being warned to stay at home and watch on TV to avoid spreading coronavirus.

Details about Prince Philip’s ‘peaceful’ death have emerged, with his wife of 73-years understood to have been at his bedside when he slipped away yesterday morning after becoming gravely ill late on Thursday, according to the Daily Telegraph.

The couple’s children then rushed to comfort their mother yesterday, with Prince Charles staying with the Queen until late last night.

Gun salutes marking the death of the Duke of Edinburgh are to take place across the UK, in Gibraltar and at sea at Midday. There will also be cannons firing across the Commonwealth, including in Australia, where a salute rang out in capital Canberra overnight.

Saluting batteries will fire 41 rounds at one round every minute in cities including London, Edinburgh, Cardiff and Belfast, as well as Gibraltar and from Royal Navy warships, the Ministry of Defence (MoD) said.

Gun salutes have been fired to mark significant national events since as early as at least the 18th century.  They were used to mark the deaths of Queen Victoria in 1901 and Winston Churchill in 1965.

The public is being encouraged to observe the gun salutes, which will be broadcast online and on television, from home.