Archbishop of Canterbury tells inquiry he is ‘ashamed of the Church’

The Archbishop of Canterbury fought back tears as he told a child sex abuse inquiry that he is ‘ashamed of the Church’ and admits abusers can ‘never be trusted again’.

In an emotional statement, the Most Reverend Justin Welby said that hearing evidence relating to child sexual abuse in the Church of England for the past three weeks has horrified him.

At one point Mr Welby emphasised: ‘I don’t know how to express it adequately – how appalled I am and how ashamed I am of the Church for what it did to those who are survivors and are coping with this.’

Mr Welby also said although abusers must be forgiven, he admitted they could never be trusted again and would have to live with the consequences of what they’ve done.

The Archbishop made these remarks while giving evidence on Wednesday at the inquiry that focused on the diocese of Chichester in West Sussex. The inquiry was held at the Pocock Street Tribunal Hearing Centre in London.

The Archbishop of Canterbury Justin Welby (pictured) held back tears as spoke at a child sexual abuse inquiry on Wednesday in London. The inquiry focuses on diocese of Chichester in West Sussex

The inquiry is to examine how the Church handled allegations of sexual misconduct in the diocese, dating back to incidents that occurred in the 1950s.

The inquiry made mention of Peter Ball, the former bishop of both Gloucester and Lewes. He was jailed in October 2015 for grooming and exploiting 18 men over a period of two decades.

A report, commissioned by Mr Welby, found the Church colluded with Ball’s priority to ‘protect and promote himself’ rather than to give help to the abused.

Although the hearing ends on Friday, the inquiry will have a separate hearing regarding how the Church handled Ball’s sexual abuse during the summer.

On Wednesday, when asked what he had learned from the hearings, Mr Welby paused and appeared to be fighting tears as he said: ‘I have learned to be ashamed again, in the past three weeks.

‘And the Church does wonderful, wonderful things, you know, across the country, extraordinary things.

‘The most stressful job in the Church is to be a parish priest, and to be a good parish priest. And that a small minority have betrayed that is horrifying.’ 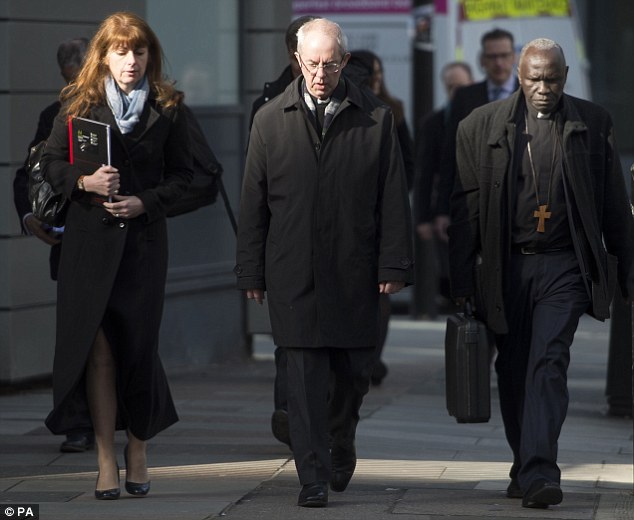 Mr Welby said although abusers must be forgiven, they could never be trusted again. Pictured l-r: Director of Communications for the Archbishop of Canterbury Ailsa Anderson, Mr Welby and Bishop Anthony Poggo, the Archbishop’s Adviser on Anglican Communion Affairs

After stating again that he was ashamed of the Church, he added: ‘The apologies are fine, but you have got to find ways of making it different and we have got to do it as soon as possible.’

The Archbishop also touched on the matter of forgiveness and accountability during the inquiry.

He said that while abusers may be forgiven, this would not stop them from facing the consequences of their actions.

Mr Welby said forgiveness is a very complex issue but added: ‘The Bible is utterly, brutally blunt about the difference between forgiveness and the consequences of sin.

‘Where there is something done wrong, there will be consequences.

‘If someone has been an abuser, they can never be trusted again – that is the consequence.’

Fiona Scolding QC, the lead lawyer for the Anglican strand of the inquiry, asked the Archbishop how the Church is addressing the issue of safeguarding.

He replied that he had implemented training, but that there was also a great need for a culture change.

Mr Welby said: ‘The training of clergy is essential, also the training of PCCs and Church wardens. People also need to follow their instincts. It is at parish level that we will change everything.’

Speaking on the blame culture in the Church, Mr Welby said a typical excuse ran along the lines of: ‘I’ve heard about a problem, but it was someone else’s job to report it.’ 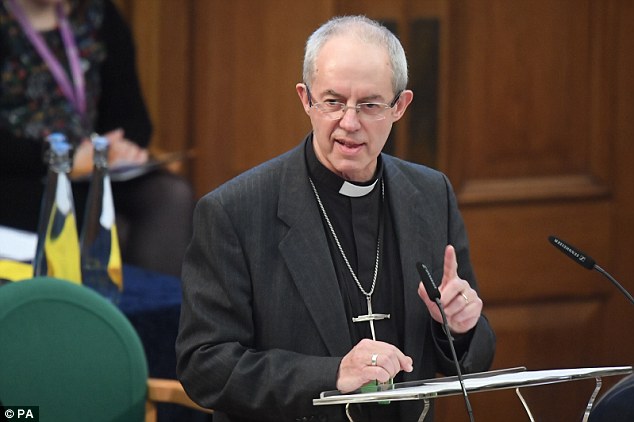 At one point Mr Welby emphasised: ‘I don’t know how to express it adequately – how appalled I am and how ashamed I am of the Church for what it did to those who are survivors and are coping with this.’ Pictured: The Archbishop speaking in February

Mr Welby added: ‘That is not an acceptable human response, let alone a leadership response. If you know a child is being abused, not to report it is simply wrong.’

The Archbishop also told the inquiry that it was taking too long for abuse victims to get justice.

He said: ‘We end up hurting people more because it doesn’t seem to follow.

‘People are not informed, they are not told what is going on.

‘It can take three or four years and you end up damaging the survivors and victims more.

‘You abuse them in the way you keep them waiting, and for that matter you don’t do justice to the perpetrator.

‘And at the heart of this has to be justice, and justice is very, very difficult to find.

‘But you have to have a system that delivers justice. That is so important and, if it doesn’t, it is not good enough and, therefore, if you can’t do it through the present system, then you have to find another that will be more reliable.’