Archery at The Olympics: From Then to Now 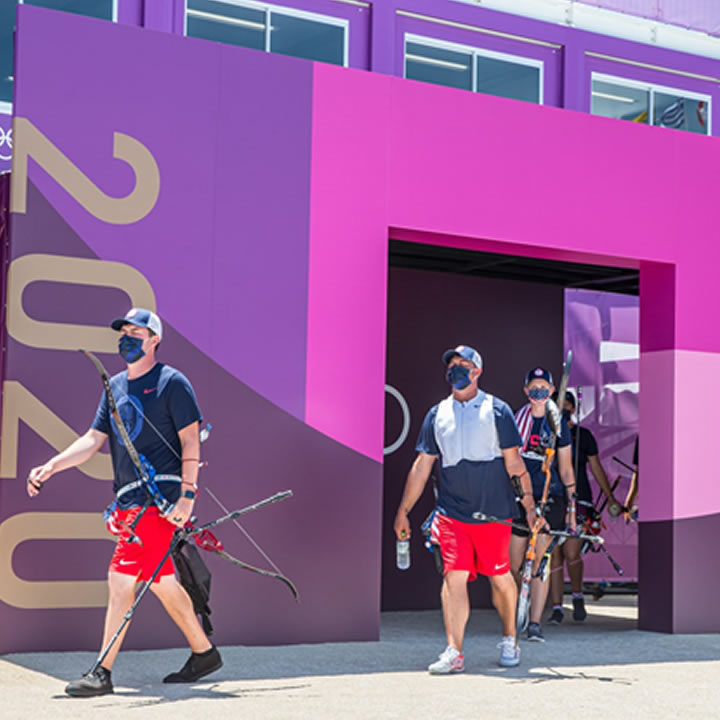 Archery has been a competitive sport since ancient times, with records of chariot archer tournaments dating back as far as 1027 B.C. in China. Despite archery’s use as a long-range instrument of war during these times, it was more often used for hunting and ceremony until centuries of refinement made archery a viable offensive tactic. Archery hadn’t reached the west in time for the ancient Olympic Games of Greece, which were mostly wrestling, throwing, and racing competitions.

Olympic Archery in the Modern Era

Archery came to the Olympics in the year 1900, for the 4th Olympic Games in Paris, France. Women’s and team competitions were added in 1904, which continued in 1908 and 1920.  Olympic archery is noteworthy as one of the first sanctioned competitions to include a women’s category. For reasons lost to history, archery was not included in 1912 or 1916.  The years prior to 1920 are considered the ‘early era’ of Olympic Archery. The sport would be absent from the Olympics for the next 52 years, due in part to inconsistency with the competition’s standards, and in part to dwindling public interest.

Archery returned for the 1972 Olympic Games in Munich, Germany. Its return can be attributed to the formation of World Archery in 1931, an organization that would come to define the standards of archery rankings on an international scale and give the sport a governing body.

Their efforts to increase popularity in the sport and lobby for its return to the games would make adding it back to the competition in 1972 an easy decision. The competition consisted of individual recurve contests for men and women for the next four Olympic Games, and team competition was reinstated in the 1988 Olympics in Seoul, Korea. A mixed team event became part of the regular schedule in 2020, making the current Olympic games the first competition to include the event.

Archery Winners At the Olympics

The early games (1904-1920) were dominated by Belgium, who won a third of the possible medals over the course of those years, including 11 of a possible 25 golds. The fact that France sits third indicates the prominence of the sport in the region. Individually, a Belgian archer named Hubert van Innes won the most medals of the early era (9). From 1972 onward, the winningest archer is Kim Soo Nyung, whom many consider being the greatest Olympic archer of all time.

Since 1972, no country has been nearly as successful in archery as South Korea (more appropriately, the Republic of Korea, or just Korea). They have won 23 of the possible 39 gold medals, with the closest competitor (U.S.A) only tallying 8.  The U.S. is second to South Korea’s 39 total medals all-time with 16, with Italy finishing a distant third (7).  Korea boasts both of the current individual Olympic champions: Chang Hye-jin of the women’s recurve bow, and Ku Bonchan of the men’s recurve bow, who both won gold in Rio de Janeiro in 2016.

Qualifying For The Olympics

Qualified competitors are chosen by the National Olympic Committee, both for individual and team competitions. Candidates are chosen from among the top finishers at two major events: The World Archery Championships and the World Team Qualification Tournament. The former exists in its own right as a high-level archery world championship; the latter ties directly into choosing teams that will compete at Olympic games 2020. Adjustments to this year’s competition were made from 2019 onward to accommodate regional events that were cancelled by the pandemic.  Currently, each country can qualify for 3 spots – two individuals, and one team.

Archery Match Formats at the Olympics

The recurve bow is the only form of archery equipment used in the Olympics (also implies it is permissible to use scopes, balancers, and protective archery equipment such as archery armguard and chestguard, etc.), so each contest references this type of bow, and excludes alternative categories like the compound bow or barebow. The competitions are also exclusively targeted at archery, as opposed to indoor or field archery. Target archery differs from field archery in that it’s stationary, as opposed to events held on a course with terrain as an obstacle.

Since 1972, matches have followed the FITA format, which stands for  Fédération Internationale de Tir à l’Arc, or the International Archery Federation.  These consist of shooting 36 arrows at 4 targets of various distances ranging from 30 to 90 meters for men, and 30 to 70 meters for women. Rather than have each archer perform turns and tally the results, Olympic archery has adapted the system for a single-elimination tournament, where competitor’s scores are compared against a single opponent instead of the field.