Rising temperatures mean that Arctic sea ice isn’t spreading nearly as widely as it used to in the winter, NASA has revealed.

At 5.75 million square miles, this year’s Arctic ice maximum extent is also the 10th-lowest in the National Snow and Ice Data Center’s record.

The news follows reports earlier this week that Earth’s poles are both undergoing ‘freakish’ heatwaves – with parts of the Arctic more than 50°F (30°C) warmer than average.

This image shows the average concentration of Arctic sea ice on February 25, 2022. The yellow outline shows the median sea ice extent for the month of March, when the ice generally reaches its maximum extent, as observed by satellites from 1981 to 2010

Usually, Arctic sea ice spreads to its furthest extent in March and recedes around September – and vice versa in the Antarctic.

The fact that ice isn’t spreading as far suggests global warming is making waters too warm for ice to properly form and spread.

Sea ice at the poles keeps the polar regions cool, helps moderate global climate and provides a habitat for wildlife.

‘There used to be stuff out there that was 10 to 12 years old. That’s gone. So there’s no secret here, you’re losing multiyear ice.’

Sea ice at both poles advances and then retreats annually, following a pattern with the seasons every year.

In the Southern Hemisphere, Antarctic sea ice follows an opposite cycle – it’s at its greatest extent around September and its minimum extent usually in March. 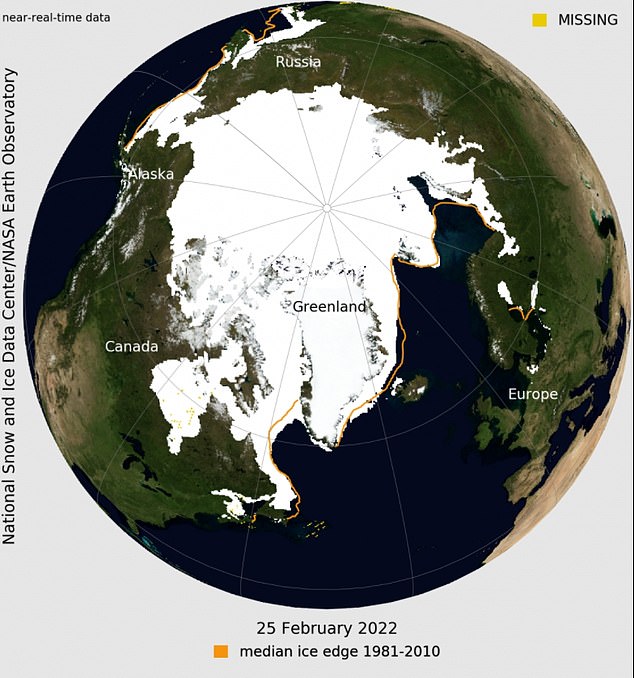 According to NASA, the fact that the Arctic ice reached its maximum extent in February this year is unusual. 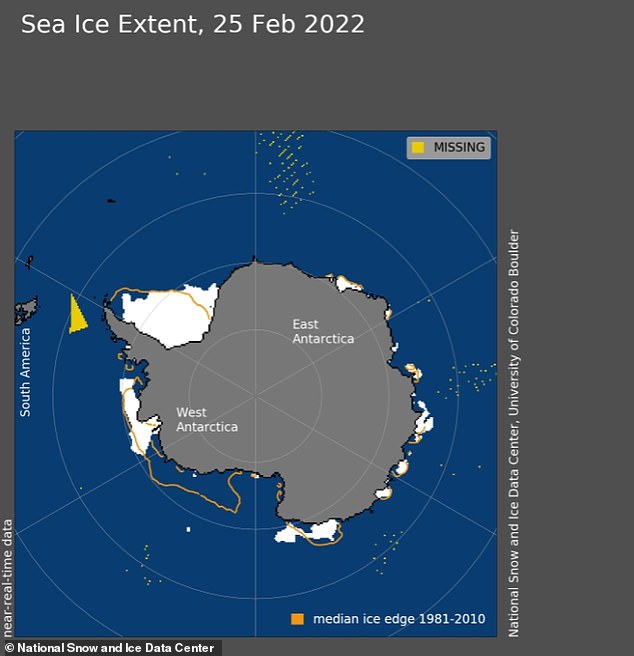 THE SPREAD OF SEA ICE

Sea ice forms as seawater freezes and, because it loses density, floats on the surface of the water.

It is estimated to cover around 7 per cent of Earth’s surface and about 12 per cent of the world’s oceans.

The lion’s share of sea ice is contained within the polar ice packs in the Arctic and Southern oceans.

NASA says winds and ocean currents specifically linked to the Southern Ocean and Antarctica have a strong influence on sea ice extent.

Scientists then use these images to estimate the extent of the ocean where sea ice covers at least 15 per cent of the water.

Since satellites began reliably tracking sea ice in 1979, maximum extents in the Arctic have declined at a pace of about 13 per cent each decade, NASA says.

Minimum extents, meanwhile, are declining at about 2.7 per cent per decade.

NASA says: ‘These trends are linked to warming caused by human activities such as emitting carbon dioxide, which traps heat in the atmosphere and causes temperatures to rise.

NASA’s analysis also shows the Arctic is warming about three times faster than other regions.

According to NASA, September Arctic sea ice minimum extents are currently declining at a rate of 13.1 per cent each decade, relative to the 1981–2010 average.

The melting of polar ice from Antarctica, the Arctic and Greenland is warping the Earth’s crust — with the effect felt thousands of miles away, a 2021 study found.

When ice sheets build up on the land, their weight causes the crust beneath the ice to sink a bit to compensate, much like how a laden boat sits lower in the water.

As the ice melts, this weight is removed, and so the crust rises up again in response in a process that scientists call ‘isostatic rebound’.

While this up-and-down movement has long been understood, researchers led from Harvard University wanted to explore whether the crust might also shift sideways.

The team analysed satellite data on polar ice losses from 2003–2018 to model the resulting impact on crustal motions.

They found that melting Arctic and Greenland glaciers caused the ground to shift horizontally in much of the Northern hemisphere, and by up to 0.3mm in the US.