Hardline states who impose tough Covid border closures could be taken to court by anguished Australians who have suffered due to their strict policy, an expert says.

The premiers of Queensland and Western Australia are reluctant to commit to the national Covid-19 recovery plan to reopen borders once 80 per cent of eligible Australians are fully-vaccinated.

In an interview with The Sunday Project, constitutional lawyer Professor Kim Rubenstein said anyone who was negatively affected by states’ refusal to open borders could take legal action.

‘Any person who is impacted by these restrictions and who can show that this is a disproportionate burden on trade [would have grounds for a case],’ she said.

‘So that if it can show that it is, in fact, protecting one state over the other, without a legitimate or proportional response, then it really is available for challenge. And we may, in fact, see that ahead of us.’

Professor Rubenstein said the Australian constitution was ‘motivated by a desire to travel freely across the country.’

‘Colonies were finding it difficult to have barriers around trade. Section 92 was placed there to discourage any restriction of travel within Australia,’ she said.

‘The reason we have tough border measures in place is because there is a massive outbreak at the moment in New South Wales and Victoria and their hospitals are going to be overwhelmed,’ she said. 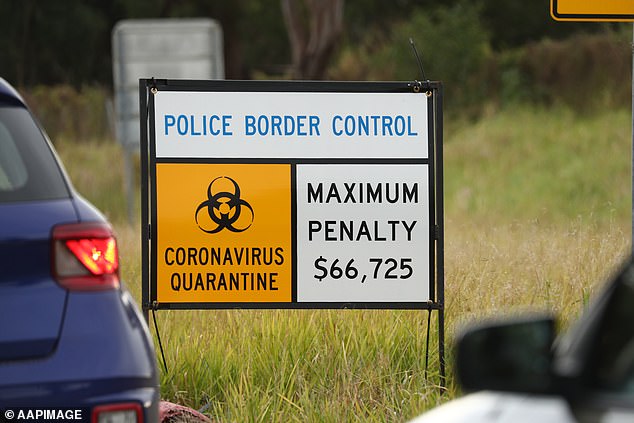 A hard border has been in place between Queensland and NSW for much of the pandemic (pictured, border control warnings are seen on the Gold Coast Highway) 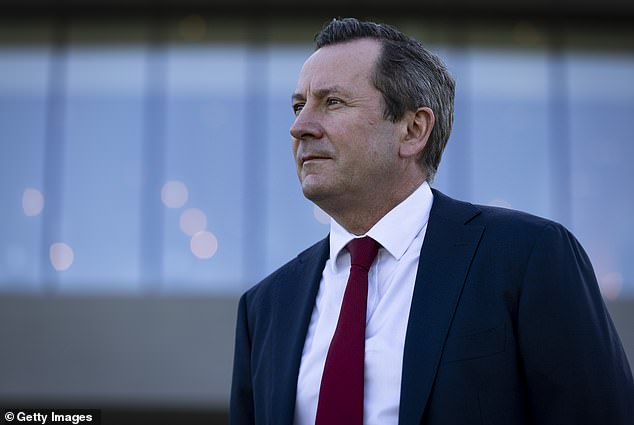 Professor Rubenstein said if premiers withdrew from the national Covid roadmap in coming months it would strengthen legal cases against them since all state and territory leaders had previously agreed to the plan.

The tough premiers’ unrelenting border closures have left tourism businesses crippled, families seperated and citizens banned from moving around their own country.

In the September quarter alone, tourism on the Gold Coast will see a $1billion slump compared to the same time last year, an industry group has revealed.

‘These are the issues the court would actually need to take into account in determining whether these restrictions are needed for the purpose that they‘re seeking to achieve in terms of health protection,’ the legal expert said. 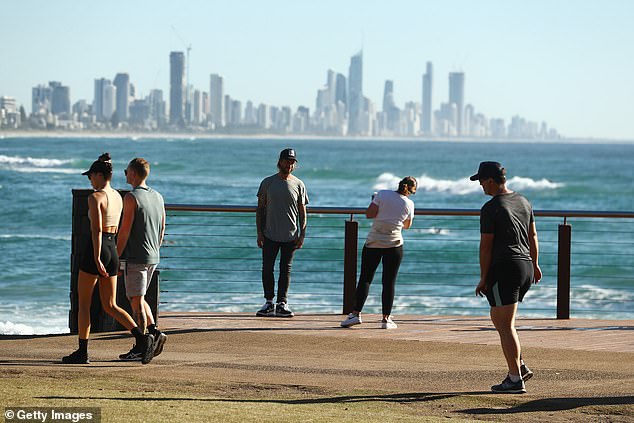 Gold Coast tourism businesses are set to lost $1billion in the September quarter compared to last year (pictured, Burleigh Heads on the Gold Coast in July) 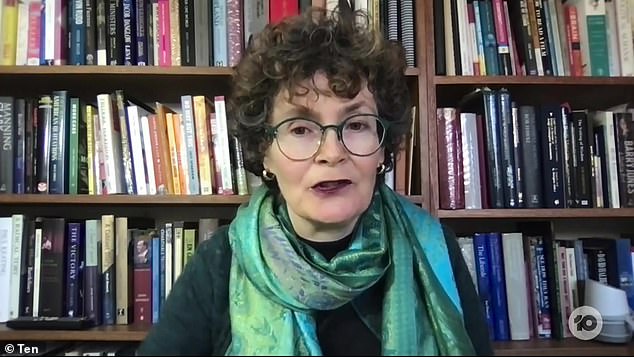 ‘The fact that there are other circumstances showing a different approach does in fact make it [the state] more vulnerable.’

Queensland and Western Australia have the lowest vaccination rates in the country, both with almost 45 per cent of residents 16 and over fully-vaccinated compared to 60.1 per cent in NSW.

Epidemiologist Dr. Catherine Bennett told the panellists the crawling vaccination rollouts in both states would delay them opening their borders.

‘A very risk-averse approach to opening borders takes the pressure off people vaccinating. It becomes a fait accompli – you‘re unlikely to reach the vaccination levels needed to be able to open safely,’ she said on Sunday.

Earlier this week, Ms Palaszczuk all but ruined Christmas plans for families hoping to reunite, saying she will ignore the national cabinet’s plan to open borders at 80 per cent vaccination rates because it will send Queensland ‘backwards’. 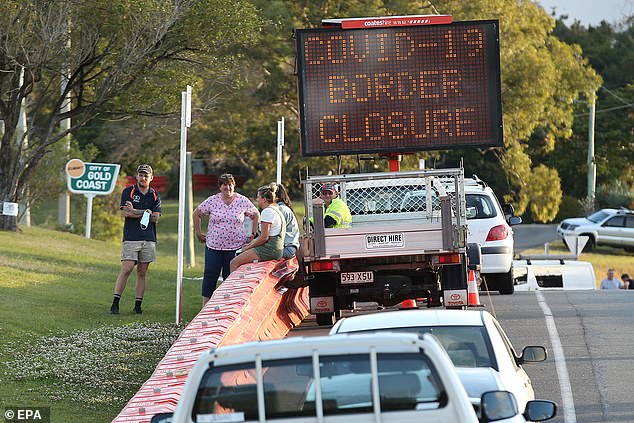 ‘Where are you going to go? Are you going to go to India? In Tokyo, you have to sit in Perspex screens with masks on and if you remove your mask you can’t talk while you’re chewing,’ she said on Thursday.

‘If you look at the national plan, the 80 per cent actually takes you backwards and I do not want that for Queensland, so we’re probably going to see a difference for Western Australia and Queensland because at the moment we have freedoms.’

Meanwhile, the lengthy-border closures are crippling Queensland’s tourism industry, with the Gold Coast set to lose almost a $1billion on holiday revenue for the September quarter compared to the same period pre-Covid.

The projection, by Destination Gold Coast, shows visitor spending in the city has plummeted by nearly $1billion compared to 2019, The Australian reports.

Over the school holiday, vendor occupancy rates were as low as 40 per cent as tourism operators struggle amid lockdowns. 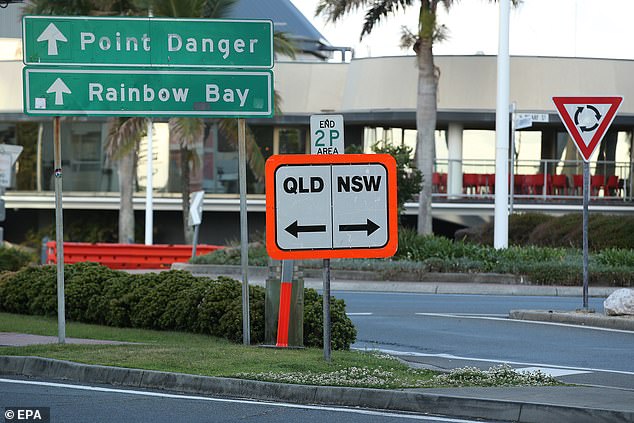 The industry group are expected to release the outlook on Monday and call for the premiers to stick to the national plan to reopen at the 80 per cent double target.

Over the weekend, Scott Morrison again put pressure on premiers who are wavering on opening borders to stick to the national plan.

‘There comes a time when you’ve got to honour the arrangement you’ve made with the Australian people, and that is when you get to 80 per cent vaccination, it’s very clear that you can start opening up,’ Mr Morrison told the Seven Network in an interview while he was in Washington.

He said at that stage there will still be some common-sense controls, like QR code logins and mask-wearing in certain circumstances.

‘But, you know, comes a time when you’ve just got to move on and get on with it,’ he said.

Deputy Nationals leader and Queensland MP David Littleproud said the prime minister has tried to show leadership by bringing premiers and first ministers together through the national cabinet. 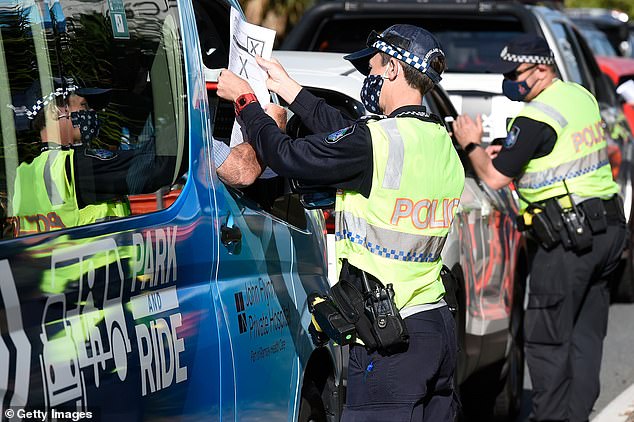 Epidemiologist Dr. Catherine Bennett told the panellists the crawling vaccination rollouts in both states would delay them opening their borders (pictured, police at the Coolangatta border)

‘Then they walk out and go different directions. The question has to be why are you changing your mind,’ he told Sky New’s Sunday Agenda program.

‘All Queenslanders want, all Australians want, is hope and certainty.’

Meanwhile, federal Heath Minister Greg Hunt said great progress is being made in the vaccination rollout.

He said 75.8 per cent of people aged 16 and over have now had their first dose of a vaccine and 51.5 per cent are fully covered with two jabs.

‘We are on track, we are making great progress,’ Mr Hunt said.

‘That program is less than two weeks into its course of action,’ he said.

NSW reported 961 new cases of COVID-19 on Sunday and nine more deaths. None of the deceased, aged from their 40s to their 80s, were double jabbed.

The death toll in the state’s current outbreak now stands at 297.

Victoria recorded another 779 new cases and two further deaths, while their were 25 new infections in the ACT. 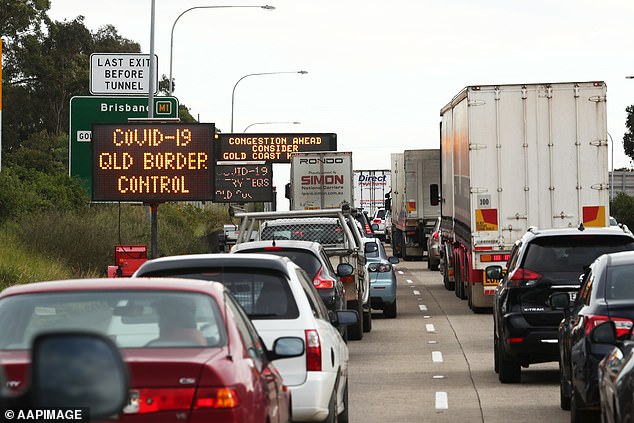 Professor Rubenstein explained the constitution was devised to permit free travel across the country (pictured, traffic as drivers queue for the QLD-NSW border checkpoint in July)