Are credit cards being replaced by buy now, pay later?

Almost half of adults under 35 do not currently have a credit card in their name, according to research by GlobalData, a data and analytics company.

It found 47 per cent of younger people have chosen to avoid credit cards, which is a rise on its previous study in 2016 – at that time 39 per cent didn’t have a credit card.

Credit card death? According to the comparison site, Finder, those who don’t own a credit card, 93 per cent never plan to take one out, preferring to use newer, alternative ways to delay payments instead

One of the key causes behind young people shunning credit cards is thought to be the rise in popularity of buy now, pay later schemes.

The biggest provider in the UK market, Klarna, has seen its customer base more than double from 7million to 16million since the beginning of 2020.

Jaimini Pattani, banking analyst at GlobalData, said: ‘Not only are alternative financing options such as BNPL increasingly offered on social media, where younger people shop, they also make purchasing on credit easier.

‘BNPL is allowing buyers to simply view credit options at the point of making a large purchase, rather than having to apply for a credit card at the bank.

Of those who don’t own a credit card, 93 per cent never plan to take one out, preferring to use newer, alternative ways to delay payments instead.

‘In particular, BNPL schemes such as Klarna have recently risen in popularity amongst the younger generation which may have played a significant role in why there is a lower credit card uptake from the results.

‘In fact, our own research shows Millennials and Gen Z are most likely to opt for BNPL as a payment method when purchasing goods.’ 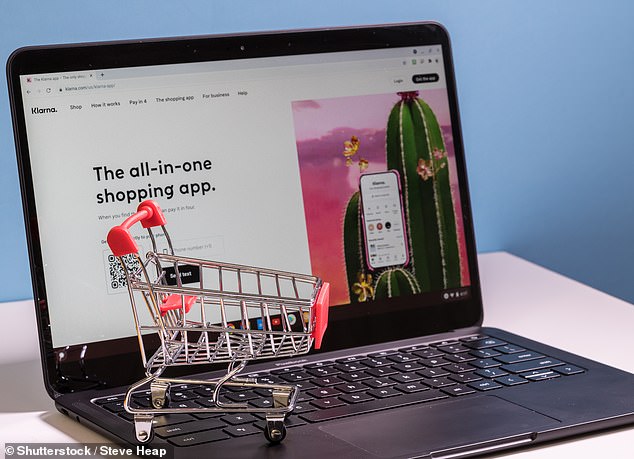 The biggest BNPL provider in the UK market, Klarna, has seen its customer base more than double from 7 million to 16 million since the beginning of 2020.

Despite banks taking steps to appeal to younger generations, their efforts are falling short, according to GlobalData.

It found that typical introductory rates, interest free periods and cashback perks are no longer attractive.

Only one in five 16-to-34-year-olds said that the traditional low or zero introductory interest rates would encourage them to take out a credit card.

For all the perks, it is vital credit card customers pay off in full each month any outstanding balance they have on their card.

Pattani suggests that banks will need to show the advantages their products have over BNPL or risk continuing to lose out.

‘There is a lack of knowledge or concern for the implications of using BNPL,’ said Pattani.

‘Banks have an opportunity to educate customers about how BNPL systems are often operating in an unregulated environment, have a lack of transparency around missed payments, and the impact this has on their credit files.

‘However, they also need to tackle the benefits of BNPL head on, providing a credit card that meets the needs of younger shoppers or risk falling further and further behind.’ 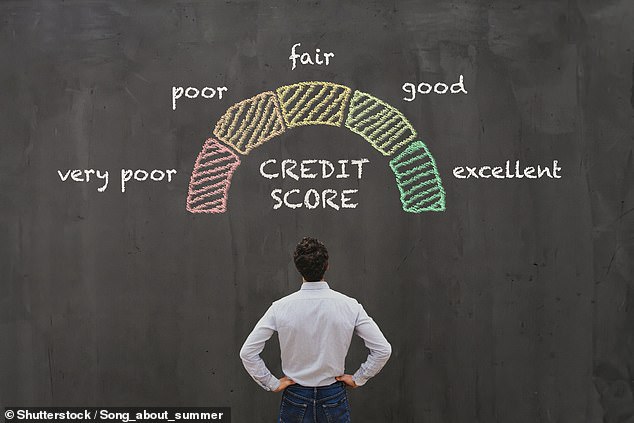 Knowledge gap: Research TSB has found that many Britons do not understand credit scores and their potential impact on accessing financial products

Does it matter if you don’t have a credit card?

The greatest potential danger to those who choose not to have a credit card is the impact it could have on a person’s credit rating.

A credit report shows a list of a person’s credit accounts, such as bank accounts, credit cards, utilities and mortgages. It will also display their repayment history, including late or missing payments.

The credit score, also known as a credit rating, is a three-digit number that reflects this information and enables lenders to establish how reliable you are when it comes to repaying money.

By not having a credit card, there will be less evidence for a lender to judge how reliable you are a repaying debt and sticking to credit agreements.

This means that someone without a credit card may have less options available to them when they come to apply for a mortgage or a personal loan which in turn could result in them paying a higher interest rate.

‘Information on your credit report isn’t the only thing lenders look at but it is one of their key criteria to judge your level of risk as a borrower,’ says Kilcourse.

‘If you’re viewed as being in the riskier category due to a lack of credit history, it might lead to your application getting rejected or a higher rate of interest.

Of course, credit cards, when managed badly can be detrimental to a person’s credit score, however, when managed well and paid off in full each month, it can help do the exact opposite.

James Jones, head of consumer affairs at Experian, said: ‘While you can build a winning credit score without using credit cards, they do offer an excellent opportunity to demonstrate your financial reliability to lenders, if managed correctly.

‘For example, a five-year-old credit card with a high limit, a low balance, and perfect payment record can boost your Experian credit score by 200 points, which on its own could propel your score from fair to excellent.’ 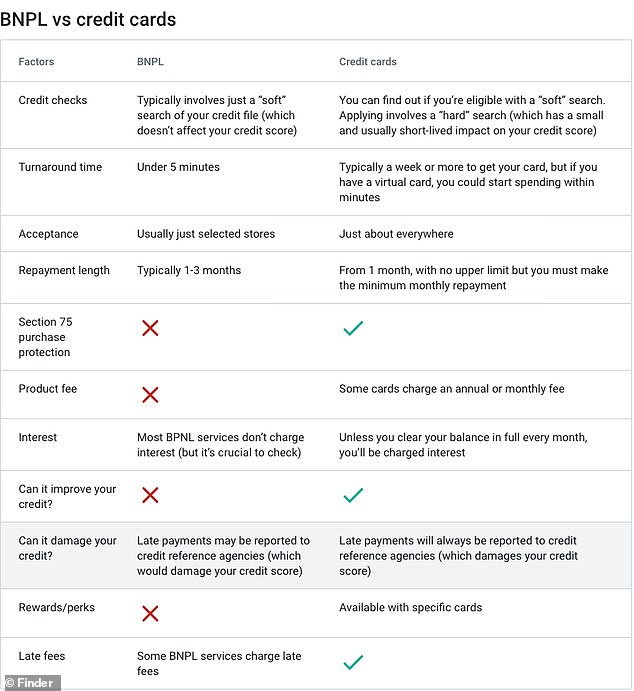 Credit cards have the advantage of section 75 purchase protection as well as also having the potential to improve a person’s credit score.

Unlike with credit cards, repaying BNPL debt on time won’t currently improve a person’s credit score, regardless of who the provider is.

In theory, the providers could report the on-time payments you make to a credit reference agency, but at present none of them do so.

However, most BNPL providers reserve the right to report missed payments to credit reference agencies, and these could then in turn be shown on a person’s credit report, which can negatively impact the score.

Ten tips to boost your rating

1. Register on the electoral roll at your current address

2. Use a credit card responsibly, and always try to retain a good amount of available credit

3. Check your credit report regularly and ask for any errors to be corrected

6. If you have bad credit, stop applying for more

7. If you don’t have a credit card, get one: but make sure you pay it off monthly