Are houseboats the next property boom? We count the cost of riverside living

Riverboat living appears to be going through something of a boom, after a leading marine finance lender reported a steep rise in demand for live-aboard vessels.

Finance deals for homes on boats have increased by nearly 40 per cent in the last year, according to Promarine Finance.

With house prices reaching another record high in May and the typical UK home now worth £262,000, it seems some people are seeing canal and river boats as an affordable alternative to the home-buying frenzy.

Buying a narrowboat is like buying a car: purchasers need to check out the condition and make sure it is canal worthy

Many types of boats can be considered as live-aboard, including powerboats or cruising sailboats, houseboats, or barges and narrowboats.

The purchase price can vary from under £10,000 to over £1million, depending on the size of the boat; its condition; the number of cabins and whether the boat comes with a mooring.

‘The ‘race for space’ fuelling the housing crisis is pushing buyers to consider alternative and more cost-effective living arrangements.’

The lender also noticed the appearance of a younger demographic, often needing to borrow a higher proportion of a boat’s value in order to finance the purchase.

‘We have seen a rapid increase in younger people moving to live on the canals on narrowboats and widebeam boats,’ said Austin.

‘Live-aboards such as canalboats are no longer considered an option for just the retiree, instead drawing people who are seeking alternative lifestyles with freedom from the traditional housing options.

‘Younger buyers want to get on the ‘property ladder’ and boat ownership is a practical and affordable alternative to renting.’

Can you get a mortgage on a houseboat?

Unless you have cash, securing a loan to finance the purchase of a live-aboard vessel can be expensive.

Marine finance companies typically offer interest rates of between 8-15 per cent, which is significantly higher than the interest rates charged for a mortgage on bricks and mortar.

‘There are a few companies that do offer financing but in no way are they competitive, and people bolt when they hear the interest rates,’ said Nicholas Austin, sales manager at River Homes.

‘Having rates around the same as mortgage loan rates would open up an amazing life on water to so many people.’

The required deposit is also higher than the minimum five per cent required for buying a property.

The minimum needed for a river or canal boat purchase is typically 25 per cent of the purchase price, although there are some lenders willing to allow 20 per cent. 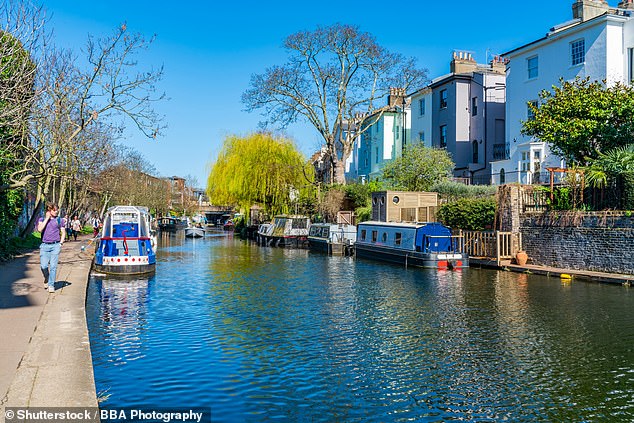 To swerve expensive mooring fees, boaters can opt to be a ‘continuous cruiser’, staying moored in one spot for a maximum of 14 days and then moving on

Marine finance companies also typically lend the money for a maximum of 10 to 15 years, so borrowers will be expected to repay the loan within that time frame.

‘We take time to understand our customers’ circumstances and make sure that they can afford the boat and our repayments,’ said Stuart Austin.

‘We always encourage people to borrow the least amount they need over the shortest time they can afford to repay.’

An alternative route to financing a river or canal boat purchase is via a personal loan, which means the boat won’t be used as collateral to secure the funds.

You can typically borrow up to a maximum of £25,000 for an unsecured loan although some lenders may be willing to offer as much as £50,000.

For the average person using an unsecured loan to borrow £25,000, the current representative APR is 4.7 per cent, according to the most recent Moneyfacts data.

What other costs are there?

When it comes to living on a boat, mooring can be the greatest cost.

Owners staying in the same location for a long period will need a home mooring. These are available from private land owners, marinas and also via the Canal & River Trust.

To avoid mooring fees, boaters can also opt to be what is know as a ‘continuous cruiser.’

In order to benefit they will need to continually move location over a range of at least 20 miles, meaning they can’t just shuttle back and forth between two or three locations.

They cannot stay moored in the same neighbourhood for more than 14 days.

‘A permanent residential mooring will cost several thousands per year, depending on location,’ said Stuart Austin.

‘There is a lot of debate about continuous cruisers, which represents an alternative to a permanent mooring. It is an inconvenience for some, whilst emphasising freedom for others.’

Although this nomadic life may be free of mooring charges, owners must still pay for a waterways licence each year.

The annual licences range from £560-£1260 depending on the length of the boat, according to the Canal & River Trust – although wide-beam boats pay a 10 per cent surcharge, rising over the next two years for the widest width band to 20 per cent.

For waterways managed by other organisations such as the Environment Agency or the Broads Authority, boaters will require a separate licence, which will have its own costs.

On top of the mooring and licensing costs there is watercraft insurance, council tax, electricity costs and boat surveys to consider.

Boating bills: Other costs to budget for

Boat Sales UK provide an estimate for a 55 foot narrow boat kept on a premium mooring and used for 3,000 cruising miles a year.

Third-party insurance is required for a licence, and this does not include contents insurance, which is likely to be more expensive compared to a house or flat.

‘All boats need to come out of the water every 7-10 years to have full out-of-water surveys done,’ said Nicholas Austin.

Although there is no law forcing you to organise a survey, it is is highly advisable that you do have one to ensure the boat is canal and river worthy.

This will help inform you of any foreseeable repairs that are required either now or in the near future.

Like with a car MOT, your boat will require a boat safety certificate.

But this is only required every four years, and you should expect to pay around £200 as well as extra for any repairs required.

One silver lining is that you won’t have to worry about the stamp duty holiday ending, as canal and river boats are exempt from stamp duty.

Are river boats a good investment?

Unlike houses, boats tend to depreciate in value – so if you want to make a return on your investment, canalside living might not be for you.

‘Boats depreciate in the same way as most cars do,’ said Stuart Austin.

‘Most boats will have a finite life and need ongoing maintenance to ensure they are seaworthy and fit for purpose.

‘These costs increase with age, and eventually some boats will need to be scrapped.’

However, it is also possible to increase the value of a boat if you are willing to spend on improving it.

‘People do complete refits of boats and that will also significantly increase the value,’ said Nicholas Austin.

‘As the boat ages and it gets closer to its out-of-water survey dates and hull maintenance dates the value of the boat will decrease.

‘However, after those things happen an increase in value will occur.’