Are these the ONLY twins with uncombable hair syndrome?

Nine-year-old twins are two of around 100 children worldwide with a rare condition that means their wild blonde locks are impossible to tame.

Agnetha and Anja Norendal have uncombable hair syndrome (UHS), which means their manes are constantly frizzy and static.

Their mother Angela, 52, from Cockermouth, Cumbria, is desperate to find out if they are the only twins in the world with the syndrome.

She said: ‘People around town where we live are used to them, but if we go elsewhere, the amount of people that stop and stare is unbelievable. We constantly get people asking for photos or to touch the girls’ hair.

‘I’m really keen to find out if there are any other twins out there with it.’

Nine-year-old twins are two of around 100 children with uncombable hair syndrome (Anja, left) 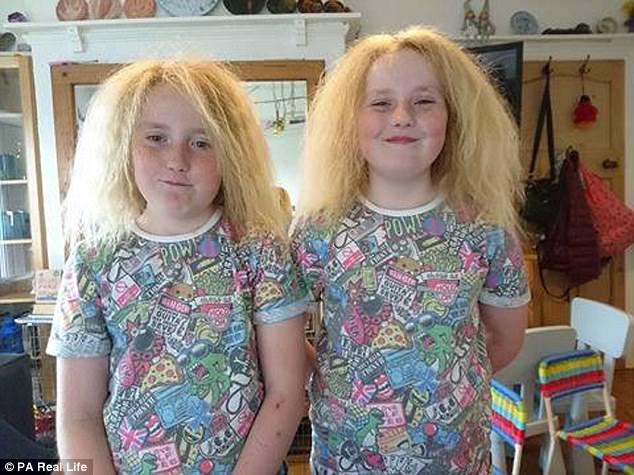 The condition causes their hair to be frizzy and static (Agnetha, left) 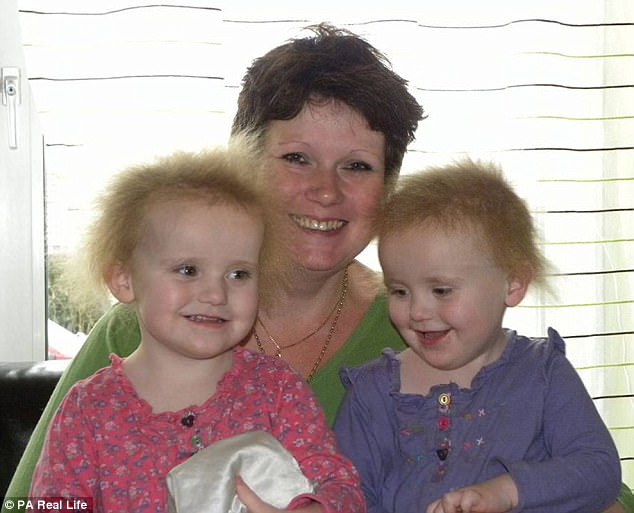 Mother Angela (pictured), 52, wants to find out if they are the only twins with the syndrome

WHAT IS UNCOMBABLE HAIR SYNDROME?

Uncombable hair syndrome is a rare inherited disorder that causes locks to stand up from the roots and not be flattened.

Such hair is usually silvery-blond or straw colored.

The hair usually appears between three and 12 months of age.

In rare cases, the syndrome has occurred alongside bone and eye abnormalities.

The syndrome usually resolves or improves at the onset of puberty.

It may be more manageable through applying conditioners and using soft brushes.

”They’re very proud of their hair’

Their mother said: ‘People around town where we live are used to them, but if we go elsewhere, the amount of people that stop and stare is unbelievable. We constantly get people asking for photos or to touch the girls’ hair.

‘They didn’t mind the fuss when they were little, but now they don’t like it as much.

‘[But] they love their hair. They wouldn’t change it for the world, and this way, they’ll always stand out in a crowd.

‘They’ve never had any negative comments. The kids at their school are all great about it.

She said: ‘They’re very proud of their hair, and love that they both have it.

‘I’m really keen to find out if there are any other twins out there with it.”

‘I don’t know what else it could be’

As soon as the twins started growing hair as babies, their mother, who works with the elderly, noticed it had an oddly coarse texture.

Then, after bringing them along to a routine appointment with her other daughter Yannika, 20, a doctor remarked on their unusual tresses, saying she thought they may have UHS.

A hair sample from each of the girls was taken away for testing and, despite no formal diagnosis being made, the family are convinced the girls have UHS.

Their mother said: ‘I don’t know what else it could be.

‘I think it affects the colour too, as they have the same white blonde shade as a lot of other children with UHS.’ 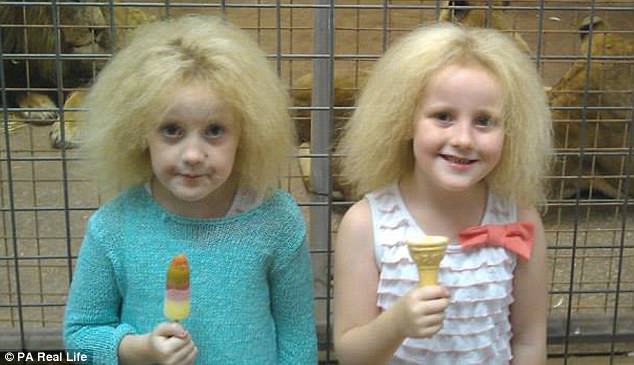 People stare at the girls, and ask to touch their hair and take photographs (Agnetha, left) 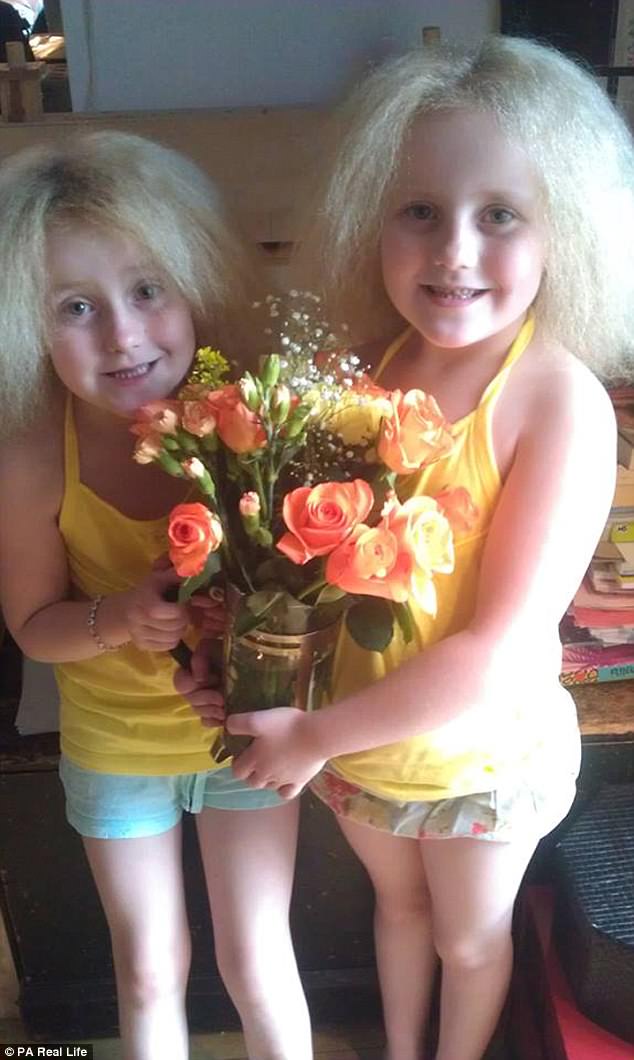 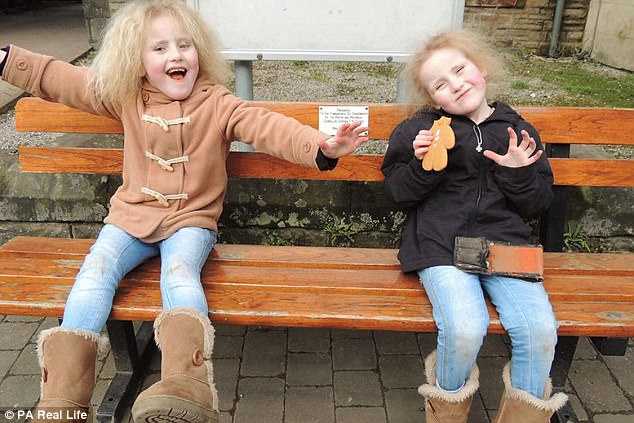 As the condition causes hair to grow exceptionally slowly, the twins have only had three haircuts in their lives, snipping off a total of around two inches.

Their mother can also only wash their hair once a week to prevent it becoming matted.

She said: ‘We hardly use any shampoo, as that makes the frizz worse. I’ll use a lot of conditioner, though. We get through a bottle a week.’

Via the internet, the family have been put in touch with a number of other UHS sufferers from around the world.

Angela said: ‘It’s nice to be able to speak to people who understand, but I wouldn’t say the syndrome has massively impacted the girls’ lives.’ 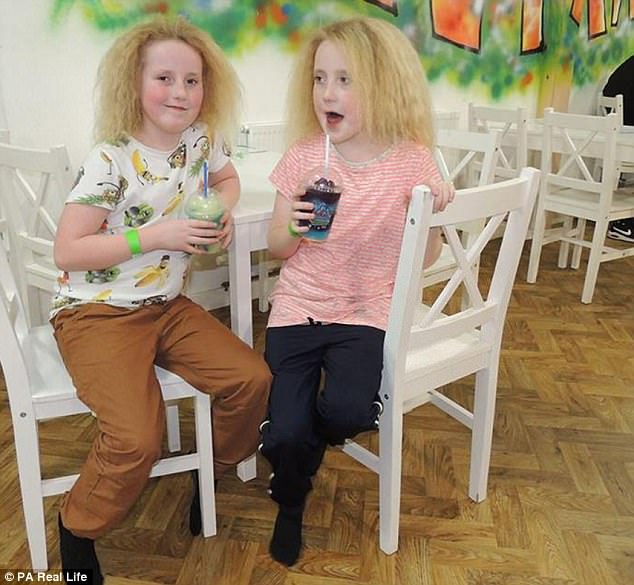 A doctor suspects the girls have the syndrome, however, a diagnosis has not been made 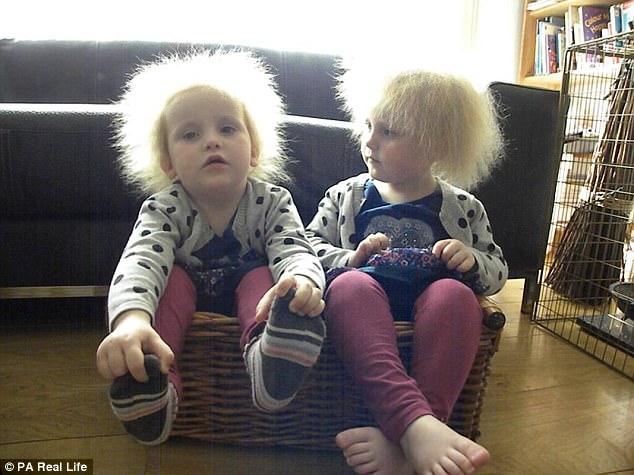 As the condition causes hair to grow slowly, they have only had their hair cut three times 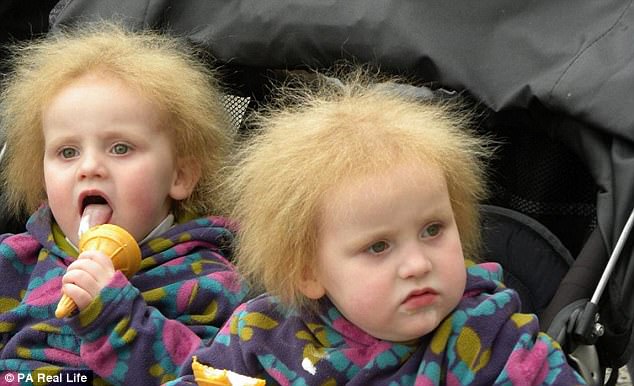