Are we reaching the end of the opioid epidemic?

If we are to call the rampant drug abuse and overdoses an ‘epidemic,’ then research suggests it may actually be past its peak, and the slowdown that is already occurring will continue, regardless of new federal proclamations.

The epidemic cost may have cost the US $504 billion in lives and lost productivity and more in 2015 and more conservative estimates put its cost around $95 billion.

While President Trump has dedicated $100,000 of his salary, no additional funds were set aside to fight the epidemic when he declared it a public health crisis in October, and there isn’t much time before Congress must finalize the federal budget on January 18, 2018.

Many experts, including the director of the CDC, have warned that the situation is set to get worse before it gets better, for some time to come, but others say that we weathered the worst before the Trump administration got involved.

Epidemiologists at Columbia University applied a classic model of epidemics to the opioid crisis. Their model (pictured) predicted that it would peak between 2016 and 2017

Using an old model to understand a new epidemic

According to his analysis, epidemics follow a symmetrical pattern.

More than a century later, researchers applied the model to the AIDS epidemic, and in 2014, epidemiologists at the Columbia University Mailman School of Public Health tried it on for size on the opioid epidemic.

The Columbia scientists hypothesized that overdoses would only continue to mount until some time between 2016 and 2017 – a precipice we are on the verge of passing.

Epidemics, in the traditional sense, are wide and rapid spreads of contagious diseases like the smallpox virus.

The proliferation of addiction through social networks is not such a far cry from the way that disease spreads through person-to-person contact, says Columbia University epidemiologist Dr Guohua Li. 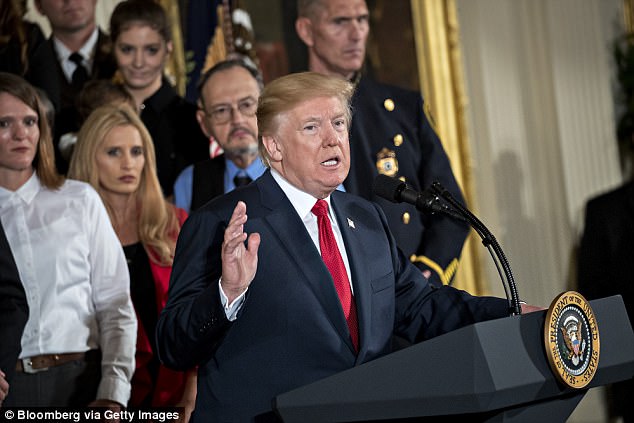 President Donald Trump declared the opioid epidemic a public health emergency on October 26, but the proclamation does not commit any funding to the fight

‘Opioids are not infectious in terms of [being] an agent,’ says Dr Li.

HOW AMERICA GOT HOOKED ON OPIOID DRUGS

Preliminary CDC data published by the New York Times shows US drug overdose deaths surged 19 percent to at least 59,000 in 2016.

It means that for the first time drug overdoses are the leading cause of death for Americans under 50 years old.

Most people’s first exposures to opioids come from social contact: A friend whose surgeon sent them home with a few extra OxyContins, or a relative with a prescription for management of their chronic back pain.

Dr Li estimates that this kind of exposure accounts for about 80 percent of the opioids involved in an overdose.

Heroin and fentanyl spread in a similar way through social networks, ‘starting with manufacturing, and trafficking, then spreading through the local market,’ he says.

Although annual overdose death tolls continue to mount, Dr Li says that the epidemic began to lose steam around 2007: ‘We can see the deceleration of the epidemic, so [we] could predict the peak.’

According to prevailing theories, epidemics slow down as societal efforts to intervene build, but that process began before President Trump introduced his opioid commission and plan for combating the epidemic.

Dr Li says cites two major ‘wins’ as the bellwethers of the beginning of the end of the epidemic: Tightened regulations on opioid prescription monitoring and local-level efforts to make drug-assisted rehabilitation and the anti-overdose drug, naloxone, more accessible to vulnerable populations.

President Trump’s newly-established opioid commission made an exhaustive list of over 50 recommendations for addressing the public health emergency.

These included more of the same approaches that Dr Li says are already working, but Trump himself has emphasized other elements.

Trump’s own Council of Economic Advisers estimated that between the lives and productivity lost and money tax dollars spent on health care and the criminal justice system, the opioid epidemic cost the US $504 billion in 2015.

Turning the crisis around would cost $183 billion over the next decade, according to Harvard heath economics professor Richard Frank’s calculations, which he published on The Hill.

That’s more than four times the Senate Republicans’ recommendation that $45 billion of the federal budget be dedicated to the opioid epidemic for the same time period.

The President has put his weight behind the introduction of drug courts to every jurisdiction, and has committed his $100,000 third-quarter salary to the creation of a large scale media and advertising campaign.

This seems to be Trump’s pet project in fighting the epidemic.

Drug addiction needs to be destigmatized, but prevention campaigns like ‘DARE’ may not help, experts worry

‘The public information campaign is necessary, but in itself would not be sufficient’ says Dr Li.

While Dr Brennan is in favor of efforts to destigmatize addiction in order to encourage people to seek treatment, he says that campaigns like the Drug Abuse Resistance Education (DARE) effort of the 1980s and 1990s are misguided.

‘Destigmatization is wonderful, especially because what we see in the opioid crisis has a lot of parallels to the HIV/AIDS crisis,’ says Dr Brennan.

‘No one wanted to treat people with AIDS…[until] it started affecting different demographics, then attitudes started to change, and the same is true for the opioid crisis.’

He says that fear kept people from getting tested and treated for HIV, but once it was no longer seen as a disease of the marginalized, diagnoses and preventative measures increased and its spread slowed. 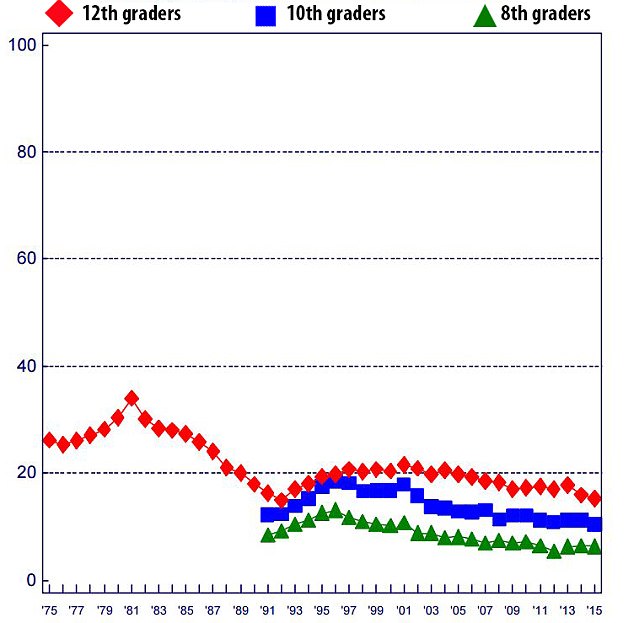 High school seniors reported using fewer drugs overall (red) in the immediate aftermath of the DARE program’s introduction in 1982, but studies suggest the initiative’s effects were overestimated and short-lived

‘If we could do that for opioid disorder, that’d be wonderful, because a lot of people are scared to tell their families or anyone else about their addictions,’ says Dr Brennan.

‘Programming around trying to convince people not to do drugs is different [from destigmatization efforts] and we should be careful before we try to replicate the DARE program,’ he says.

In fact, some studies have shown that the DARE program and its ‘just say no’ messaging had no impact, or even a slightly negative impact, on drug abuse.

‘The “Just Say No” campaign was an utter failure,’ says Tim Ryan, a former addict who now travels the country advising clinics and addicts on his A&E show ‘Dope Man.’

‘We need real talk, but we also need real solutions. The younger generation is struggling with pressures of life through social media, telling them “you have to be the best, you can’t fail,”‘ he says.

This leads these young people to ‘have anxiety and depression, [and then] have a Xanax for this, smoke weed for that,’ says Ryan.

Ryan says that adolescents need to know ‘it’s okay to be a kid,’ and instead of hearing ‘just say no,’ they should be exposed to real people who are ‘proud to be recovering…coming out and talking about it.’

It is unclear what Trump’s media campaign will look like other than ‘really tough, really big, really great,’ as he said when he announced his salary commitment.

His $100,000 partial salary pledge is so far the only quantified allocation of federal resources to fighting the epidemic. 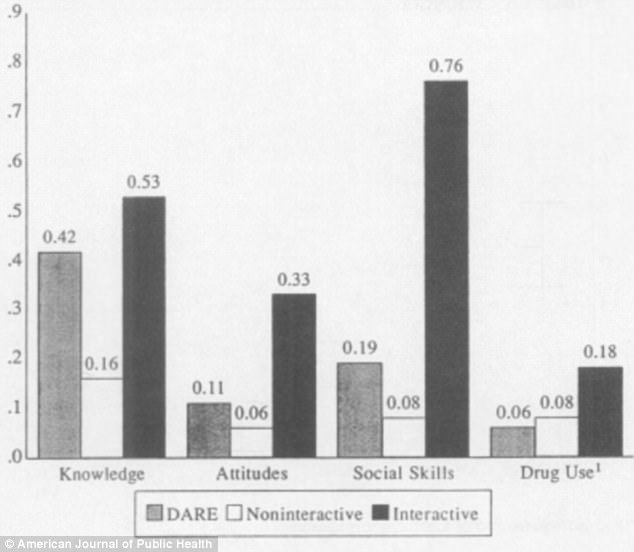 Moreover, Dr Li says he ‘wouldn’t rely on the federal response alone. The declaration of an epidemic helps, it will organize society at a local and community level to tackle this public health emergency, but, as you know, we haven’t seen any real, concrete commitment to allocate adequate financial and other resources to deal with this health problem.’

Instead, he says local communities have really shouldered the burden, and that that’s where progress is being made against the epidemic.

City police and fire departments have begun carrying not only naloxone, but drugs like Methadone that can help opioid addicts ween off of prescription or illicit drugs without debilitating withdrawals.

For many addicts, recovery programs are too expensive, and even when they are affordable, there may not be a bed available for some time.

In January, Ocean County in New Jersey implemented treatment programs in five police departments. Drug overdose deaths were about 25 percent lower in 2016 than in 2015, following the introduction of the new, more accessible assistance.

Naloxone, the anti-overdose drug, is now available over the counter in pharmacies throughout New York state as well. 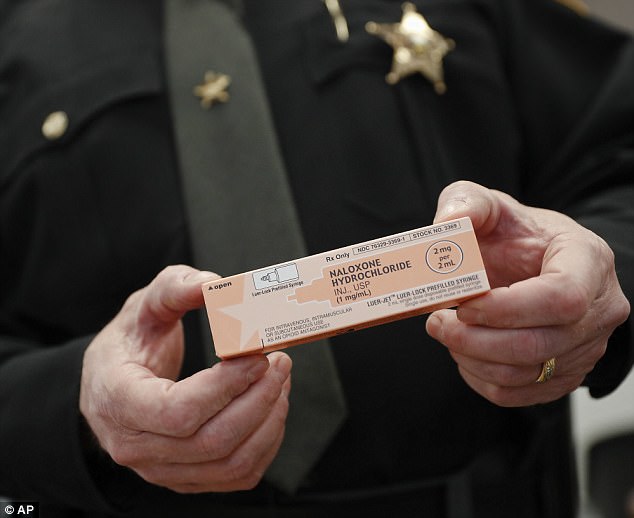 Local police and fire departments have made a dent in the overdose deaths by carrying naloxone, an anti-overdose medication (file image)

The Department of Justice has the resources to fight fentanyl

While naloxone’s widened availability provides some relief from overdoses, ‘the major driver of the epidemic is fentanyl, the illicit synthetic opioid,’ says Dr Li.

The drug’s continued spread through distribution networks fits right into his theory of addiction as a social contagion.

This is where the Department of Justice (DOJ) comes in.

While the Department of Health and Human Services may face significant budget cuts next year, the DOJ is ‘expecting an increase in their budget, at least that’s the plan,’ says Dr Li.

The hope is that drug courts may offer treatment options, rather than incarceration, for people charged with mere possession of opioids, while the DOJ actively takes on cartels, importers and distributors of fentanyl.

‘I expect enforcement will be stepped up in the coming year, helping to reduce trafficking, especially of fentanyl, which accounts for over 50 percent of overdoses,’ says Dr Li.

He says that the most effective efforts would be ‘increases of seizures of shipments that come across the border from Mexico, as well as [drugs from] transactions through the internet.’