Are YOU a Mastermind? Take JOHN HUMPHRYS’ test to find out

Fifteen years ago, I started asking questions on Mastermind — that’s half as long as I’ve been interviewing on BBC Radio 4’s Today.

And the big difference between the two? On Mastermind they actually want to answer the questions. A bit unfair maybe, and in some respects the two gigs are similar.

I love the story of the shovel owned by a very old man who’d spent his life digging ditches on a farm. A passer-by asked him how long he’d had it.

‘All my life,’ he answered.

‘Surely not the same shovel?

‘Well, I’ve had to replace the blade every few years and a few new handles but, yup, it’s the same shovel.’

So it is with Mastermind. An awful lot has changed about it over the years — the presenters, the technology, the whizzy lighting and clever graphics — but in the end it’s about one person in the spotlight under the relentless pressure of a ticking clock.

I can’t (sadly) replicate all that for this quiz, but when you’re answering these questions, try timing yourself. In two minutes, a good Mastermind contender would get about a dozen right. Good luck!

1. Who regretted a ‘moment of clarity’ that came to her on a walking holiday?

2. Which Eurocrat became embroiled in an investigation into wiretapping?

3. Who appeared at Glastonbury this summer and got a rock star’s welcome even though he didn’t sing a note?

4. And why did he give colleague Emily Thornberry a slap on the chest?

6. Why did scientists get excited when they spotted an object that looked like a cigar hurtling through our solar system?

8. Which actress decided she’d had enough of being ‘Nurse Who?’ and took up a different medical title?

9. Which real-life nurse switched career to train as a priest and is now the most senior woman in the Church of England?

10. Why did Vanellope Hope capture the nation’s heart?

11. Of whom did Ricky Gervais write: ‘He was tear-jerkingly generous, gushing money and time like an enchanted spring?’

13. Why did a worm terrify half the nation on prime-time telly?

15. Why was the BBC unlikely to feature poaching in its new summer cookery programme?

16. Which brothers fell out over a tribute concert for the Manchester bombing victims?

19. Why might a punch-up on a pavement in Bristol have helped Australia win back the Ashes?

21. And why is her daughter so famous?

And now — for a little light relief — something we never do on Mastermind: multiple-choice questions.

1. What did the Committee on Standards in Public Life say was the most significant factor leading to harassment before the election in June?

C: A character in the new film Star Wars: The Last Jedi

3. Why was Prue Leith ‘mortified’ after she tweeted about the Great British Bake Off?

A: She admitted she ‘cheats’ by stuffing her Christmas turkey the day before

B: She said she’d prefer a boiled egg for Christmas dinner

C: She told Paul Hollywood he should shave off his beard

D: She gave away the Bake Off winner before the programme was broadcast

4. Why did environmental scientists tell us to stop putting fleeces and polyester clothing in the washing machine?

A: The soap gets in the sewers and clogs them up

B: The power used contributes to global warming

D: One single wash creates millions of plastic fibres which threaten our oceans

5. At which event did shoddy sticky-back plastic, a P45 form and a throat lozenge combine to embarrass a public figure?

A: A live edition of Blue Peter that didn’t go to plan

B: Theresa May’s speech at the Tory party conference

C: An edition of Have I Got News for You featuring Ed Sheeran

6. When George Clooney had 14 friends around for dinner he gave each of them a gift. What was it?

What was the extent of George Clooney’s generosity when he had friends over for dinner?

A: A voucher for free meals at McDonald’s for life

B: A box set of his movies

D: A suitcase containing a million dollars in cash

7. The New York Times asked 60 of Donald Trump’s friends and aides how much TV he watches each day. What did they say?

A: Between four and six hours

B: Never more than eight hours

C: Not long enough, if he doesn’t tweet while he’s watching

D: All the time: he even keeps a monitor on during meetings

8. According to an NHS survey, women are more happy than men when they . . .

C: Have their first child

9. What did Mrs May say was the naughtiest thing she remembered doing as a child? 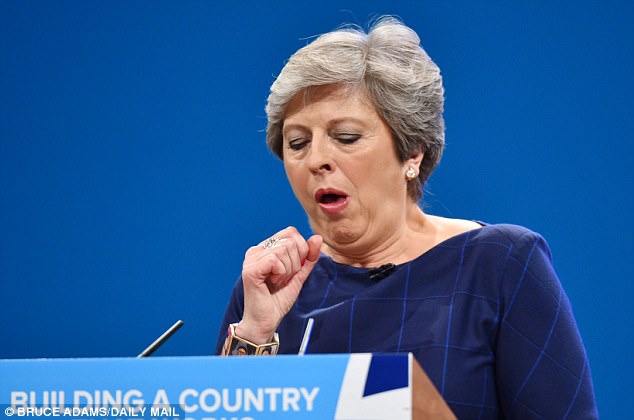 Theresa May made the headlines for her coughing during the Conservative Party conference but what naughty thing did she do as a child?

A: Throwing darts at a picture of Michael Foot

B: Playing truant so she could attend secret meetings of the Young Conservative Society

C: Running through a field of wheat

10. Why will this year’s Oscars ceremony go down in history?

A: None of the actresses cried in their acceptance speech

B: No one thanked their mother

C: A special award for services to the film industry went to Harvey Weinstein

D: Warren Beatty and Faye Dunaway read out the wrong card for best film: La La Land instead of Moonlight

11. What links the words antifa, broflake, gorpcore and youthquake?

A: You’ve never heard of them

B: You’ll probably never hear of them again

C: You don’t want to know

D: They were on the shortlist for ‘word of the year’ in the 2017 Oxford English Dictionary

1: Theresa May. She decided to call a General Election

5: The seventh series of Game Of Thrones

6: It was the first body identified as coming from another solar system. Some said it might be an alien spaceship

7: Experts concluded it was a lump of ice protected by a carbon-rich crust. One scientist put it: ‘More like a galactic choc ice than an alien invader’

9: The Rt Rev Sarah Mullally, the new Bishop of London

10: She was born with her heart outside her body.

11: George Michael, whose funeral was in March

12: Darcey Bussell, who had been the only female judge on Strictly Come Dancing until Shirley Ballas arrived

13: The Bobbitt worm, on Blue Planet 2, shot out of the ocean bed and devoured a fish with its razor-sharp teeth

14: It’s a tribute (if you can call it that) to Lorena Bobbitt, who cut off her husband’s manhood in the United States

15: Channel 4 had poached the Great British Bake Off

16: Liam Gallagher said Noel’s performance had been ‘fake’ and nothing more than a PR stunt when he teared up on stage.

17: Sailing around the world single-handed. He broke the world record by six days

19: As a result Ben Stokes was barred from the England team